FCS Football Preview and Predictions: Week 3 Games of the Week | The Analyst 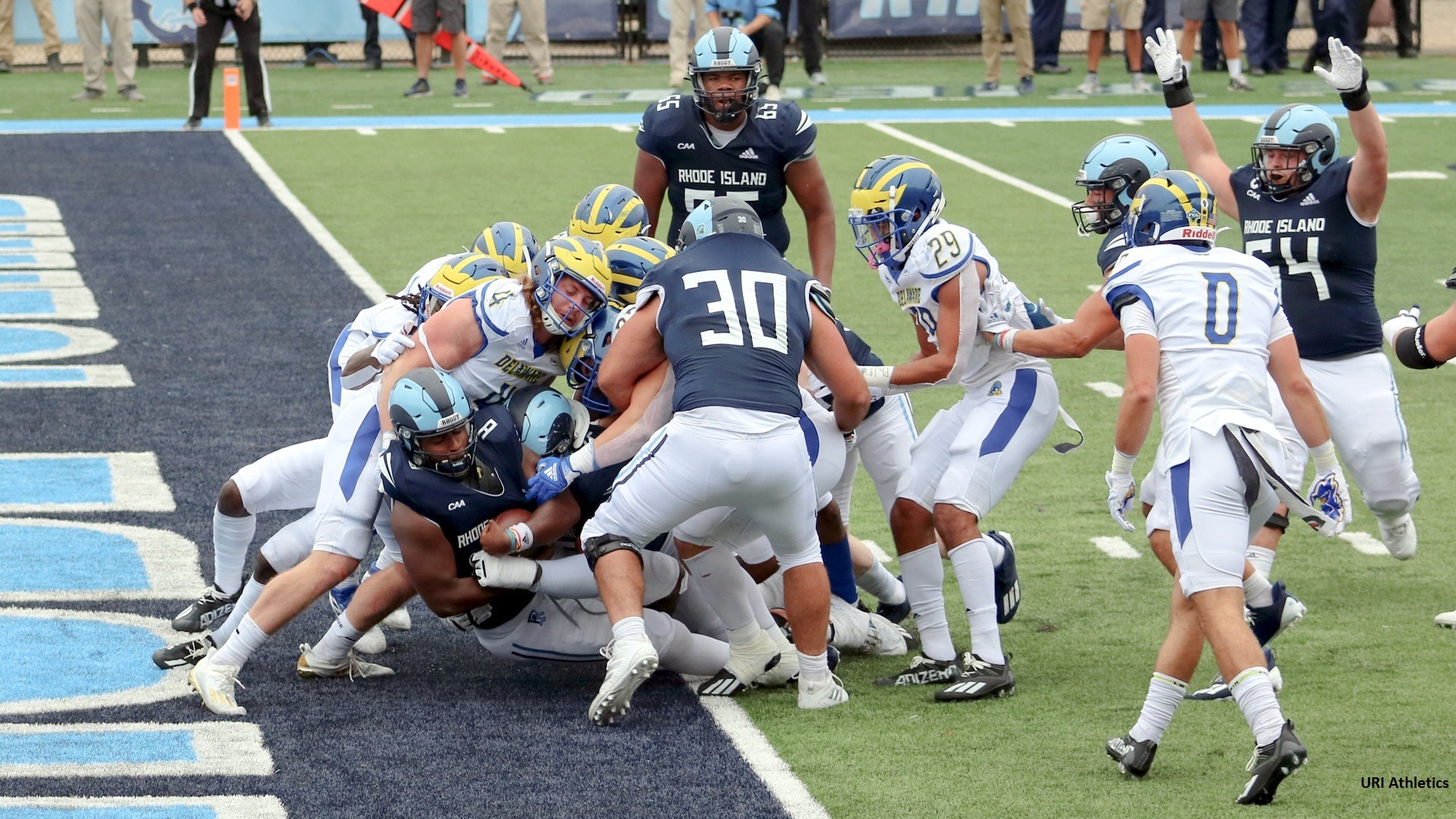 FCS Football Preview and Predictions: Week 3 Games of the Week

Ten is considered perfect, of course, but the FCS college football season needs even better this week. With the season advancing in importance, 10 isn’t enough for the games of the week preview.

Week 3 has gone bigger and better with a baker’s dozen.

And heads up, if you like Saturday’s schedule, what follows next week may be better.

Here are the Week 3 games of the week across FCS college football (all times ET):

Notable: This is URI’s home opener, and in a scheduling quirk, the early CAA showdown is occurring in Kingston for the fourth straight season (URI won 22-15 last season with a touchdown return off a blocked punt in the final four minutes). Among the 13 CAA teams, UD has surrendered the fewest points per game (8.0) and URI the fewest yards per game (261.5). UD quarterback Nolan Henderson, who missed the URI matchup last season, is 12-2 as a starter and comes off a career-high 21 completions against Delaware State. His counterpart, Kasim Hill is 11-5 in URI starts, and the Rams are 8-0 when he rushes for a TD. Blue Hens linebacker Johnny Buchanan has games of 23 and 15 tackles.

Notable: Army will keep pounding its triple option attack at Villanova, whose usually stout rushing defense is off to a sluggish start, allowing 155 yards per game and 4.8 yards per carry. But the Cadets also will struggle to slow ‘Nova backs DeeWill Barlee, TD Ayo-Durojaiye and Jalen Jackson, who have combined to average seven yards a pop and help the offense to an FCS-leading time of possession (39 minutes, 39 seconds). The Wildcats’ last three FBS wins are against Temple (most recently in 2018).

Notable: Richmond is relying on a safe, balanced offensive approach, with Savon Smith and Aaron Dykes combining on 65 carries through two games and Reece Udinski completing 72.6 percent of his passes on just 5.7 yards per attempt. Lehigh opens a rugged stretch of games off a win over Georgetown in its Patriot League opener. Thirteen of safety TyGee Leach’s 14 tackles against the Hoyas were solo stops, and the Mountain Hawks went over 150 rushing yards for the second consecutive game.

(A look back to our 2022 Ivy League season preview)

Notable: Both teams are playing nine SWAC opponents, so this matchup doesn’t count as a conference game. Jackson State’s defense has allowed only two field goals and 295 yards in two games. Linebacker Nyles Gaddy, who had four sacks against Tennessee State, will pursue Grambling quarterback Quaterius Hawkins, who threw for 292 yards and three TDs in the first half against Northwestern State – coach Hue Jackson’s first victory with the Tigers.

Notable: Nicholls won 18-17 in the only previous meeting in 1975. The Colonels’ standout running backs duo of Julien Gums and Collin Guggenheim is off to a slow start with a combined 32 carries for 108 yards against two FBS opponents. SEMO just ended an eight-game losing streak against non-Ohio Valley Conference opponents, topping rival Southern Illinois 34-31 on Paxton DeLaurent’s fourth TD pass with 11 seconds remaining.

Notable: One of this week’s four Big Sky-MVFC matchups, it has taken on added interest following UND’s win over Northern Iowa and NAU’s over Sam Houston. UND has won only three of its last 18 road games, but QB Tommy Schuster is particularly efficient, coming off a 20-for-23, 275-yard, three-total TD performance. The Lumberjacks, who are playing their home opener, seek to get last year’s 1,100-yard RB Kevin Daniels (28 carries, 59 yards) on track.

Notable: UNI forced six turnovers in last year’s 34-16 road win over Sac State, which improved the Panthers to 4-3 all-time in the Big Sky-MVFC Challenge. Their 2022 opponents have averaged 564.5 yards and 36:42 time of possession, staggering numbers given the Panthers’ strong defensive history. The well-rested Hornets utilize two QBs, Jake Dunniway and Asher O’Hara, and Cameron Skattebo racked up 228 all-purpose yards and three TDs in a season-opening win over Utah Tech. Their defense had three interceptions in the opener, but surrendered 506 passing yards. UNI wide receiver Deion McShane could take advantage of it.

Notable: N.C. Central is 2-0 for the first time since its final Division II season in 2006, and its five-game winning streak since last November is bettered in the FCS only by defending national champion North Dakota State. Quarterback Davius Richard guides an offense that ranks second nationally in third-down conversion percentage (64.3). UNH senior Dylan Laube’s 48 carries are the most in the FCS, and why not given his 5.5-yard average and five TDs.

Notable: This year’s Mid-America Classic marks the 110th meeting between in-state rivals (ISU leads 58-42-9 and has won four times in a row). Jalen Carr’s first career kickoff return went so well – a 98-yard TD while leaping over a Valparaiso would-be tackler – the Redbirds will want more of them. Linebacker Zeke Vandenburgh has racked up 22 tackles and four sacks. EIU has flashed improvement through two games, but the Panthers have dropped 29 of their last 32 overall. Jonah O’Brien has spread his TD passes to five different receivers.

Notable: ETSU may have been caught looking ahead while losing its SoCon opener at The Citadel. An incredible 27 of the Bucs’ last 32 conference games, including all four against Furman, have been decided by eight or fewer points. Running back Jacob Saylors is off to a big start again and has 4,682 all-purpose yards and 24 TDs in his career. Furman transfer Tyler Huff has the second-highest completion percentage (78.4) in the FCS, and he can thank All-America tight end Ryan Miller (17 receptions, 180 yards, 2 TDs).

Notable: This first-ever meeting between the program will be played at Providence Park, home of the MLS’ Portland Timbers. The Bobcats seek their first FBS win since 2006 (19-10 over Colorado), while Oregon State goes after its first 3-0 start since 2014. Montana State’s top four running backs have injuries – Isaiah Ifanse, Lane Sumner, Kaegun Williams and Jared White – but the Bobcats have still racked up 325.5 rushing yards per game, ranking second in the FCS. Elijah Elliott, from Portland, is projected to start this week.

Notable: This wasn’t selected as the game of the week, but it’s the one that carries the most national buzz. NDSU takes a six-game winning streak against FBS opponents into its first matchup since 2016, and its first ever against a Pac-12 foe. Although Arizona (15 returning starters and a bunch of transfers) appears vastly improved from a 1-11 season, it ranked 99th in the FBS in rushing defense a year ago, so the Bison are going to attack on the ground with Hunter Luepke, Kobe Marshall, TaMerik Williams and Co.

The Pick: North Dakota State (here are five reasons why the Bison will win)