FCS Football Preview: Week 2 Games of the Week | The Analyst 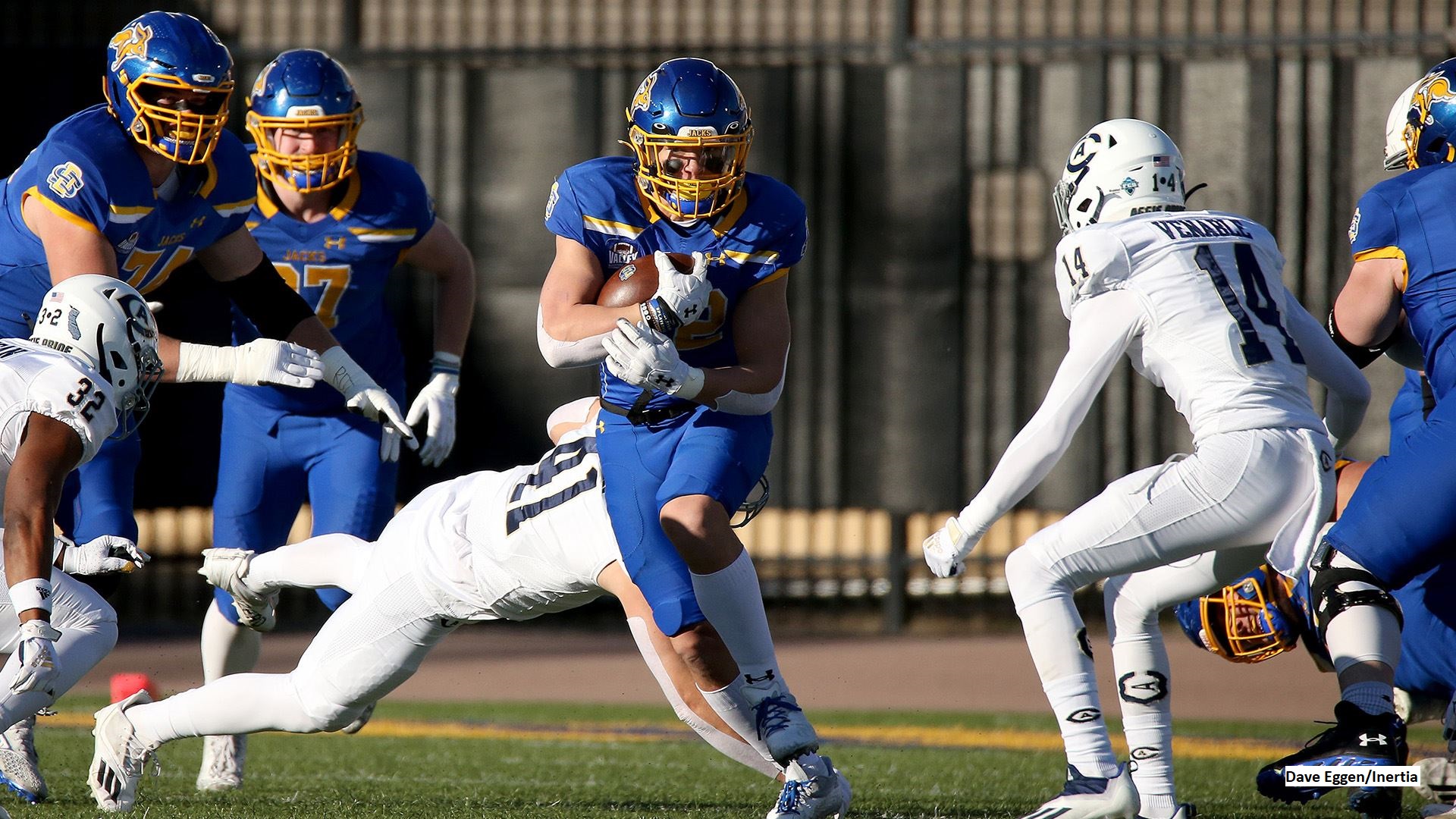 FCS Football Preview and Predictions: Week 2 Games of the Week

Thursday night’s UT Martin at Missouri State matchup may as well be the Daytona 500 of Week 2 in FCS college football – basically getting the schedule started off in banner fashion.

A rematch from the 2021 playoffs, it’s the FedEx Ground FCS Game of the Week.

Yet make no mistake, all teams are putting the pedal to the metal as the new season revs up.

Here are the Week 2 games of the week across FCS college football, where this season there are an all-time-high 130 programs (all times ET):

Notable: UTM won at Missouri State 32-31 in the first round of the 2021 playoffs – the Skyhawks’ only one in seven all-time meetings. Quarterback Dresser Winn passed for 272 yards and two touchdowns, and the Skyhawks gained six takeaways in the win. The defending Ohio Valley Conference champs opened this season with a 42-25 win over Western Illinois, which, like Mo State, is a Missouri Valley Football Conference program. Zak Wallace rushed for a career-high 139 yards and three TDs. Seven different Mo State players contributed to their defense’s seven sacks in a season-opening 27-14 win at Central Arkansas. QB Jason Shelley accounted for 317 yards of total offense and two TDs, connecting on three passes of 25 or more yards to wide receiver Ty Scott (eight catches, 160 yards).

Notable: All of the wins during YSU coach Doug Phillips’ 5-13 tenure have occurred when All-American Jaleel McLaughlin has 150+ rushing yards, and that includes 203 yards and three touchdowns against Duquesne last Saturday. Dayton, which is coming off coach Rick Chamberlin’s 100th career win, will want ball control with running back Jake Chisholm while redshirt freshman QB Dante Casciola settles in. Casciola had more rushing yards (96) than passing yards (87) against Robert Morris.

Notable: In season openers, Montana posted a 47-0 rout of Northwestern State and South Dakota was beaten 34-0 by Kansas State. UM cornerback Justin Ford’s fumble recovery gave him a takeaway in 11 of the team’s last 13 games. Transfer QB Lucas Johnson (four TD passes) seeks to build on his big debut. USD has dropped its last six matchups against the Griz (most recently 31-17 in 2019). QB Carson Camp will face a fierce pass rush, and left tackle Alex Jensen is questionable with a leg injury. Carp, though, is excellent at spreading the ball around to different offensive players.

Notable: Originally on the ill-fated fall 2020 schedule, this matchup would have been better in a previous season: N.C. A&T has won four HBCU national titles since 2015, and NDSU captured FCS national championships in the same seasons as part of nine dating to 2011. N.C. A&T, though, is just 5-7 since the start of the 2021 season. Aggies redshirt freshman QB Zachary Yeager’s 48 pass attempts in last week’s 28-13 loss to North Carolina Central were one shy of the school’s single-game record. Their stout rush defense (N.C. Central was limited to 69 rushing yards) will be challenged by the Bison’s offensive line and a running backs unit that could have five players over 1,000 career yards (Kobe Johnson and Hunter Luepke are there already). N.C. A&T’s marching band will not be at the game and will instead perform on Sunday at the Detroit Lions’ home opener.

Notable: UNI hasn’t played in Grand Forks since 1976, and coach Mark Farley lost his only game against UND in 2006 (35-31). The lowest rushing averages of Farley’s 22 seasons have all occurred since 2017, so the Panthers get the ball downfield with the pass. QB Theo Day led the FCS in yards per completion (14.9) last season, and it was 14.3 with 286 passing yards in last week’s 48-31 loss to Air Force. UND, which was tied at Nebraska midway through the third quarter before falling 38-17, has won 35 consecutive home openers as well as 15 of its last 16 overall games at the Alerus Center. In 22 career games, QB Tommy Schuster has completed nearly 65% of 630 pass attempts and been sacked only 13 times.

Notable: UCLA’s first game against an HBCU also will drop the list of FBS programs yet to play an FCS opponent to Notre Dame (facing Tennessee State in 2023) and USC (canceled a 2021 game against UC Davis). Alabama State doesn’t have a win over an FBS program in its FCS era. The Hornets, though, are off to a 2-0 start in the Eddie Robinson Jr. coaching era, although season-opening QB Dematrius Davis left the win over Miles due to a shoulder issue, relieved by, appropriately, Myles Crawley.

Notable: URI has won the only two previous meetings, and QB Kasim Hill accounted for three TDs in last year’s 45-21 triumph. The Rams defense allowed only one score and held 2021 CAA rushing leader Ty Son Lawton to 46 yards on 20 carries in a season-opening 35-14 win at Stony Brook. Bryant fell at FIU 38-37 in overtime, but QB Zevi Eckhaus (279 yards of total offense, two total TDs) claimed Big South offensive player of the week and Gage Moloney passed for 106 yards and a TD off the bench. Linebackers Ryan Saddler (13) and Joe Andreessen (10) reached double figures in tackles.

Notable: Both teams enjoyed rousing starts to the season heading into this first meeting: Campbell outrushed The Citadel’s triple option in a 29-10 win and W&M beat Charlotte 41-24 for its first FBS victory since 2009, with neither winning team committing a turnover. Campbell dual-threat QB Hajj-Malik Williams has accounted for 43 TDs in 20 career games, while counterpart Darius Wilson (304 yards of total offense, two TD passes) is coming off CAA offensive player of the week honors. W&M LB John Pius racked up 4.5 tackles for 26 yards in losses as part of his career-high nine stops. The Tribe have won 37 of their last 39 regular-season games against nonconference FCS opponents.

Notable: TSU holds a 17-11 lead between the two teams in the Southern Heritage Classic, but JSU is expected to pull out of the annual classic after this year (JSU has a 29-22-2 advantage in the all-time series). QB Shedeur Sanders passed for a career-high 362 yards and three TDs in last year’s 38-16 win. He’s coming off FedEx Ground FCS National Offensive Player of the Week following the Tigers’ 59-3 rout of Florida A&M. TSU was impressive as well in a 36-29 loss at FCS power Eastern Washington. Devon Starling rushed for a career-high 207 yards on 8.3 yards per carry, and the OVC squad racked up 547 yards. Adding to the fun, TSU coach Eddie George recently said he wouldn’t let his son Eriq, a high school linebacker, attend JSU, where Deion Sanders has quickly built an HBCU powerhouse.

Notable: SDSU blasted UC Davis 56-24 in the first round of last year’s playoffs. The Jackrabbits defense was impressive in a 7-3 loss at Iowa, surrendering only a field goal off a mere 5-yard drive. LB Adam Bock picked up where he left off last season with 13 tackles and a fumble recovery. The ‘Jacks will be without All-American tight end Tucker Kraft (ankle injury), but QB Mark Gronowski has an array of targets with RB Isaiah Davis, TE Zach Heins and twin wide receivers Jadon and Jaxon Janke. The Aggies enter on a four-game losing streak since an 8-1 start last season. They moved the ball (387 yards) in a 34-13 loss at Cal, with Miles Hastings completing 32 passes and RB Ulonzo Gilliam gaining 150 yards from scrimmage and his 39th career TD, and becoming the school’s all-time leader in all-purpose yards (4,630).