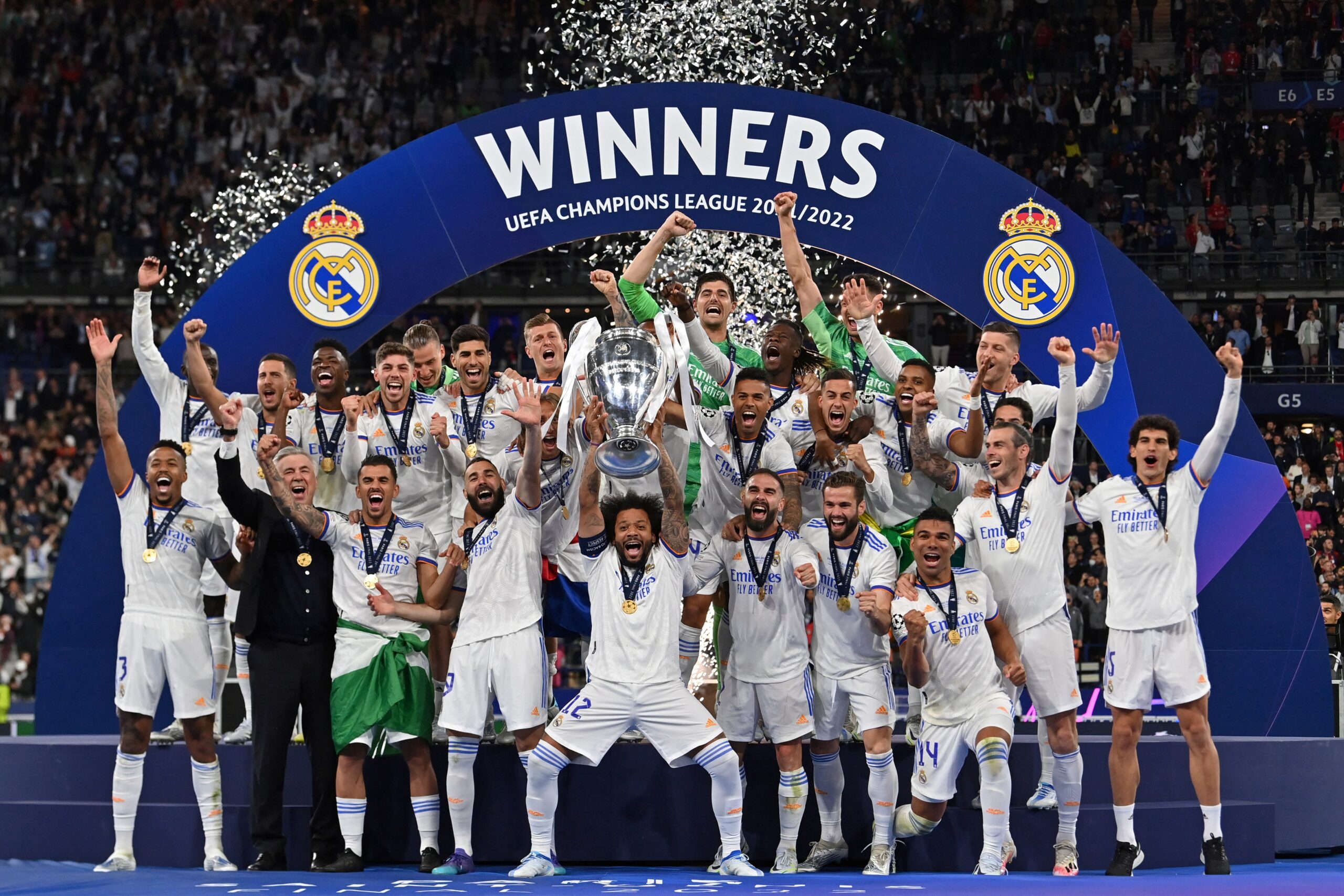 The Champions League groups are now drawn, but who will prevail? In our 2022-23 UCL preview we look ahead to the main storylines prior to the 31st edition of the UEFA competition since its overhaul in 1992, with all 32 teams set to do battle in the opening matchday between 6-7 September.

Lionel Messi has the chance to catch up with Cristiano Ronaldo’s record UEFA Champions League goal tally in 2022-23, with the Portuguese legend unable to add to his tally this season following Manchester United’s failure to qualify for the competition.

Messi’s total of 125 goals is 15 fewer than Ronaldo’s 140, so whilst it’s unlikely that the Argentine will go as far as matching the record this season – Messi has never scored more than 14 in a single UCL campaign – he could put pressure on Ronaldo, considering he is also two years younger than his rival.

Messi’s PSG side should advance to the latter stages of the competition in 2022-23, which will aid his quest for the record, but both he and Ronaldo will be looking over their shoulders, worrying about the threat posed by both Erling Haaland and Kylian Mbappé in the race for the most UCL goals.

Haaland is scoring at a trajectory never seen before in the UEFA Champions League.

When he makes his UCL debut for Manchester City, Haaland will play his 20th match in the competition. He’s already guaranteed to have the record goal tally by a player after 20 Champions League appearances, with his 23 goals in 19 games already seven goals more than both Ruud van Nistelrooy and Roberto Soldado managed in their first 20 UCL apps (16 goals).

When comparing Haaland to Messi, Ronaldo, Robert Lewandowski and Mbappé in a Champions League goal race chart, it’s clear how far ahead the Man City striker is.

All-time leading Champions League scorer Ronaldo took 61 appearances to get to 23 goals – Haaland’s current tally – while he was only four months away from his 26th birthday when he did it.

Mbappé (41 games) and Messi (42 games) were closer to Haaland, but still took over double the number of appearances to reach the tally, while Lewandowski reached 23 UCL goals in his 40th appearance.

Haaland is a constant menace to opposition defences, only failing to score in five of his 19 games in the Champions League so far.

If he continued his current rate of 0.83 goals per game in the Champions League, Haaland would be on 152 Champions League goals by the time he reaches Ronaldo’s total of 183 matches – 12 more than the Portuguese.

Of course, a football career isn’t this simple to extrapolate, but it’s a scary thought.

Always the Bridesmaid, Never the Bride

Manchester City will be hoping that the signing of Haaland will be the final piece of the puzzle in their mission to win the UEFA Champions League.

This will be their 12th season in the competition – all of those in successive campaigns since 2011-12 – and the closest that they have come so far was in 2020-21, when they finished as runners-up to Chelsea.

2011-12 was the first season that Paris Saint-Germain were taken over by Tamim bin Hamad Al Thani – the Qatari eventually taking 100% control in March 2012 after an initial 70% stake in the summer of 2011.

Before that season, PSG had won just 16 games in the Champions League, but that tally is nearly four times higher since 2011-12, with 77.1% of their UCL victories coming since that takeover.

The investment in both PSG and Man City has obviously impacted the rest of Europe’s big clubs, but the fact remains that neither have been able to use their enviable wealth to secure a Champions League title.

Only Arsenal (83) have won more Champions League matches than PSG (70) without winning a UCL title, while Manchester City’s tally of 56 wins is the fourth most of the clubs yet to win the trophy.

With both Arsenal and Lyon absent from the 2022-23 Champions League, that leaves the pressure on PSG and Man City.

In Pep Guardiola, City have one of the only eight coaches to have won at least two Champions League titles since the competition was rebranded from the European Cup in 1992 – his two successes coming with Barcelona in 2009 and 2011. Should he win a third, he’d join just Zinedine Zidane (three) and Carlo Ancelotti (four) in winning at least three UCL titles as a coach.

Guardiola could well reach 100 wins as a coach in the Champions League this season, but he’d need his Manchester City side to at least make the knockout stages to make this happen.

It’s very likely that he’ll be beaten to the landmark by the most successful manager in European Cup/Champions League history, however. Carlo Ancelotti is the only manager to win the competition four times – across both the old era before 1992 and since and needs just two wins this season as Real Madrid boss to reach the century of victories in the competition (excluding qualifiers).

Ancelotti could even become the most successful manager in UCL history in terms of match wins, should his side secure five victories in the competition this season, overtaking Sir Alex Ferguson’s current record-tally of 102 wins.

Should Ancelotti lead his reigning champions to the UCL final in 2022-23, he’ll break the Champions League record for number of games managed in the competition – the final would be his 191st game as a coach, again overtaking Ferguson (190).

Jude Bellingham turned 19 years old on 29 June, meaning he will have another Champions League season as a teenager ahead of him.

The Borussia Dortmund midfielder has already played 1,189 minutes in the competition – the seventh highest tally for a teenager in UCL history. With a possible 540 minutes available in the group stage for Bellingham to play, it’s likely he’ll move up to fourth in the rankings and there’s every possibility that he could overtake the tally of minutes played by Mbappé in the competition as a teenager (1,715), especially if the Englishman’s side progress to the knockout stages.

Arguably the most exciting young English talent now, Bellingham has already been involved in six goals in his 16 appearances (two goals, four assists) in the Champions League.

Maccabi Haifa have become the first side from Israel to qualify for the UEFA Champions League proper since Maccabi Tel Aviv in 2015-16. The Greens themselves have qualified for a third Champions League edition, which is the most of an Israeli club, and their first since 2009-10.

The bad news for them is that no side from Israel has ever progressed from a UEFA Champions League group stage, with Israeli clubs winning just four of 30 previous matches in the competition (D4 L22 excluding qualifiers).

The slightly good news is that half of those wins, however, were by Maccabi Haifa in 2002-03 (two).

One of Maccabi Haifa’s biggest goal threats in the UCL this season could be Frantzdy Pierrot, who scored five of their 14 goals during qualification this season.

A Haitian international, he is likely to become the third player from Haiti to appear in the UEFA Champions League after Wilde-Donald Guerrier (six apps) and Réginal Goreux (three), but should he score he’d be the first UCL goalscorer from Haiti.

Haiti are currently one of 24 nations to have had at least one player appear for them but not produce a goal in UEFA Champions League history – Pierrot will be hoping to reduce that list to 23.

Nations to be Represented in UCL History Without Scoring

Who Will Qualify for the Last 16?

We all have our own views on who might qualify from the UCL group stages this season, but what does the data say? We asked our supercomputer for the numbers and it was able to tell us the likelihood of qualification for all 32 teams. You can find more information in our in-depth prediction overview of the 2022-23 competition via the supercomputer, plus the favourites for the 2022-23 UCL title.

Here are the supercomputer’s qualification prediction numbers for the UCL 2022-23 group stage: