Cover 3: Breaking Down the Must-See Matchups of the NFL’s Week 3 | The Analyst 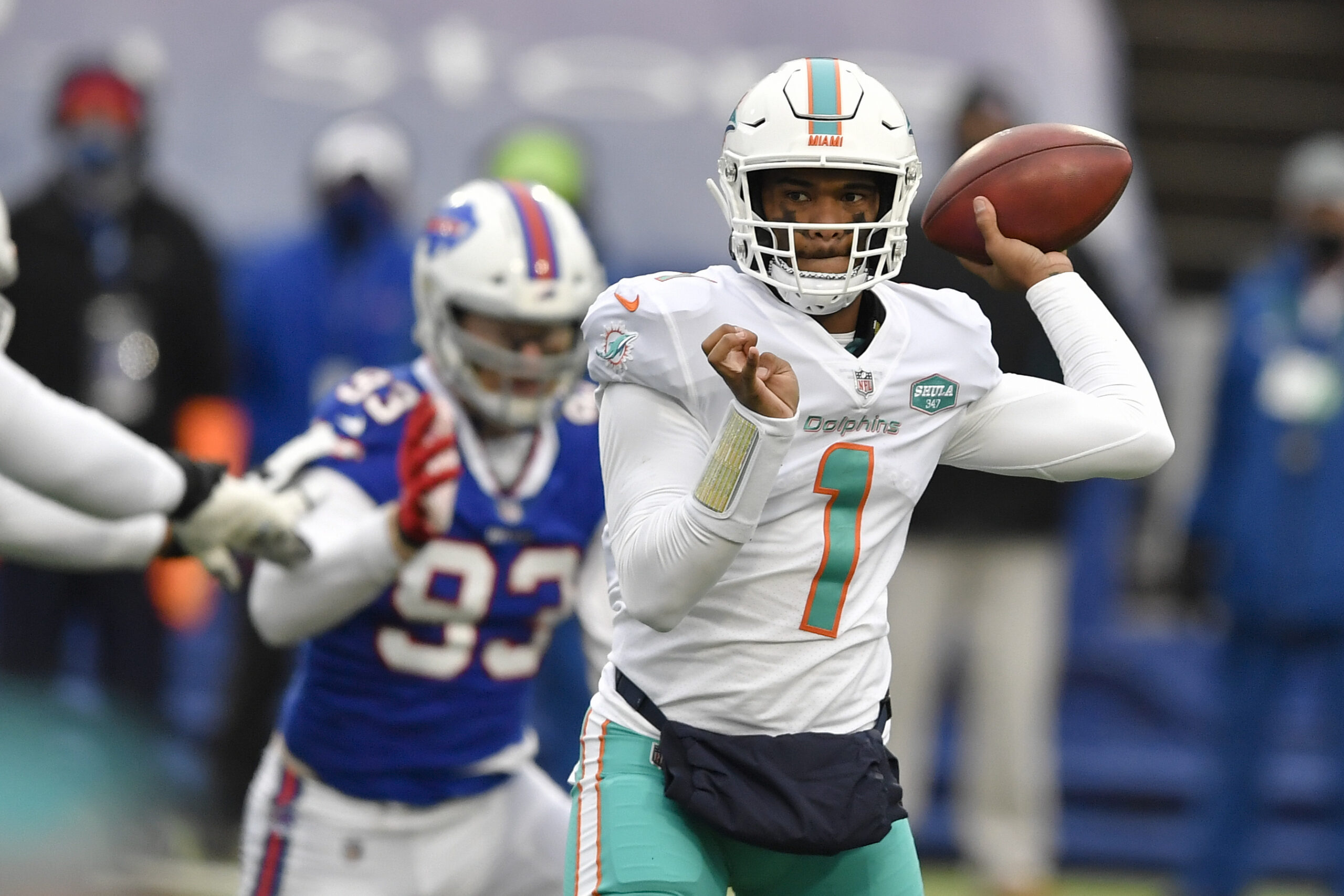 The Miami Dolphins have passed every test to date during the brief but so-far impressive Mike McDaniel era.

Acing the next one would really be something.

While the 2-0 Dolphins – and the suddenly prolific exploits of Tua Tagovailoa – rank as two of several candidates for the NFL’s most pleasant surprise through the first two weeks of play, there’s little debate about which team has been the most dominant.

The Buffalo Bills enter Hard Rock Stadium this weekend having run roughshod over both the defending Super Bowl champion Los Angeles Rams and the AFC’s top seed from last season, the Tennessee Titans. They’re the only team ranked in the top five in our EVE (Efficiency vs. Expected) ratings in both offense and defense, and have been no strangers to strong starts in recent years.

This AFC East clash between the goliath Bills and upstart Dolphins is one of three games SmartRatings has pegged among the most delectable on the Week 3 menu.

The Bills come into Miami tied for the NFL lead in both scoring efficiency and touchdown efficiency, having generated points on 52.4% of their drives and reaching the end zone on 38.1% of those possessions. And it seems highly probable that Josh Allen, who’s posted a league-best well-thrown percentage of 89.7% through the first two weeks, and the offense will have little trouble lighting up the scoreboard once again.

Lying underneath the surface of the Dolphins’ stunning 42-38 comeback win over Baltimore in Week 2, in which Tagovailoa tied a franchise single-game record with six touchdown passes and Miami scored 28 fourth-quarter points to erase a 35-14 deficit, was the defense’s futile attempts to stop Lamar Jackson and the Ravens’ passing attack for most of the afternoon.

The Dolphins are allowing a league-worst 2.193 yards over expected on passing plays, and their 17 quarterback pressures are the fewest in the NFL. That’s clearly a problem going into a matchup against an elite quarterback and a receiving corps that offers greater diversity than the one the Ravens trotted out last week.

Assuming Gabe Davis returns from an ankle injury that caused him to miss Monday’s blowout of Tennessee, the Bills have four receivers (Stefon Diggs, Davis, Isaiah McKenzie, Jamison Crowder) with burn rates of at least 80%, well above the league average of 60.4% (a burn is defined as a receiver winning his matchup with a defender on a play in which he’s targeted). And Diggs is clearly on top of his game after abusing an overmatched Titans secondary for 148 yards and three touchdowns on 12 catches despite Davis sitting out.

If the Dolphins are going to win this game, it likely has to be another firefight. And they may just have the weapons to keep pace.

Tagovailoa is coming off easily the best game of his career, but his 76.8% well-thrown rate and pickable pass percentage of 4.88 suggest he may not have completely arrived just yet. But as last week showed, Miami can’t be counted out of any game when it possesses two dynamic receivers that can rival any duo in the NFL.

The Dolphins may have pulled off the coup of the offseason by acquiring the ever-dangerous Tyreek Hill to pair with 2021 rookie sensation Jaylen Waddle, and the tandem’s gigantic potential was on full display against Baltimore as they became the first set of teammates in NFL history with at least 10 receptions, 150 receiving yards and two receiving touchdowns in a game.

Among wide receivers with 100 or more targets in 2021, Hill ranked second in burn rate (70.8%) and Waddle third in open percentage (86.4), which measures how often a receiver is open when targeted.

The task still won’t be easy for Miami, as the Bills’ 2.018 yards under expected on passing plays is the third-best mark in the league. Buffalo’s sturdy secondary could be down as many as two starters, though, with standout safety Micah Hyde and cornerback Dane Jackson each sustaining neck injuries against Tennessee.

The reigning world champion Rams have been giving some credence to the potential Super Bowl hangover theory after following up a lopsided season-opening home loss to the formidable Bills by barely hanging on to beat the rebuilding Atlanta Falcons last week, needing a Jalen Ramsey interception in the final minutes to preserve a 31-27 victory.

Arizona has had its issues as well in the early going, having been outscored 64-21 over the season’s first six quarters before Kyler Murray and the offense finally got untracked to pull out an improbable 29-23 overtime win at Las Vegas in a game the erratic Raiders blew a 20-0 halftime lead.

Puzzling results are often the norm with the Cardinals. They’re a league-best 9-1 on the road during the regular season since the start of the 2021 campaign but haven’t won at home in 11 months, having dropped six straight at State Farm Stadium.

They’re also still adjusting to life without DeAndre Hopkins as the game-changing receiver serves a six-game suspension, robbing the offense of its most consistent downfield threat. That invaluable missing piece has morphed Arizona’s passing attack into essentially a dink-and-dunk operation in which Murray has averaged a mere 5.42 air yards per attempt, with only Seattle’s Geno Smith posting a lower figure among starting quarterbacks.

That philosophy may still be effective enough for the Cardinals to avenge last season’s forgettable 34-11 playoff loss to the Rams, provided their NFC West rivals continue to oblige their opponents with turnovers and gaffes.

Los Angeles has had three giveaways in each of its first two outings, not to mention a huge special teams breakdown last week that allowed the Falcons to block a punt and return it for a touchdown to get back into the game. Two Matthew Stafford interceptions further aided Atlanta’s cause, and the veteran quarterback’s 22 picks since the start of 2021 are the most of any quarterback.

Needless to say, the Rams won’t be duplicating last season’s accomplishments if Stafford doesn’t lower the ugly 8.11 pickable pass percentage he’s produced through two games. Fortunately, he may have the perfect antidote to his turnover fever in this week’s opponent.

All but one of Stafford’s 22 interceptions since Week 1 of last season have come in non-blitz situations, and his 129.6 passer rating when blitzed in 2021 was the best in the NFL among quarterbacks with 50 or more pass attempts. The Cardinals have brought extra rushers on 45.6% of opponents’ pass attempts, the highest rate in the league through the first two weeks.

So, you may be saying to yourself, ‘Well, why don’t the Cardinals just back off a bit on the blitzing?’ Sounds simple, enough, right?

Well, consider this: Arizona faced Patrick Mahomes, another of the league’s most dangerous quarterbacks against the blitz, in Week 1. Defensive coordinator Vance Joseph called blitzes on over half of the Chiefs’ passing attempts, and the results were frighteningly predictable. Mahomes finished the day 30 of 39 for 360 yards and five touchdowns as Kansas City cruised to a 44-21 win.

The Rams are awfully tough to beat when Stafford takes care of the ball. Counting last season’s postseason run, L.A. is 13-2 when he throws one interception or less and 8-0 when he’s gone without one since the start of 2021.

It sounds strange to say that the X-factor in a showdown between two of the GOAT quarterbacks could be which team establishes a more effective running game. But when considering the amount of star power that likely won’t be in Tampa on Sunday, it’s reasonable to suggest that neither Tom Brady nor Aaron Rodgers could wind up having the greatest influence on the final outcome.

While the results were far better in Week 2 than Week 1, the Packers remain in a bit of an offensive transitional phase as Rodgers works on building a rapport with a group of receivers that no longer includes Davante Adams. The Buccaneers, meanwhile, are simply having trouble surrounding Brady with a viable supporting cast following a rash of early season depletions.

Bad luck (injuries to Chris Godwin and Julio Jones) and bad decisions (Mike Evans’ one-game suspension for shoving New Orleans cornerback Marshon Lattimore last week) could leave Tampa Bay without its three most accomplished receivers for this one. There’s also a chance the Bucs could be starting a third-string left tackle with Donovan Smith uncertain due to a hyperextended elbow and backup Josh Wells landing on injured reserve.

Factor in a fierce Green Bay pass rush – the Packers have three players (Kenny Clark, Rashan Gary, Preston Smith) with pressure rates above 25.0%, well above league average – and one can envision the Bucs leaning heavily on Leonard Fournette and their ground game once again.

Fournette has seen hefty workloads in each of Tampa’s first two games, but with vastly different outcomes. As we noted last week, he was highly productive running behind a front line that routinely controlled the line of scrimmage in the Bucs’ season-opening win at Dallas. Those holes weren’t there against the Saints in Week 2, though, with Fournette averaging a paltry 0.88 yards before contact while plodding his way to a 24-carry, 65-yard afternoon.

A better day could be in store this week against a Green Bay defense that ranks 29th in EVE against the run and was absolutely abysmal in that department last time out. Chicago backs David Montgomery and Khalil Herbert combined for 160 yards on 19 attempts (a massive 8.4 yards per carry) on a night in which Justin Fields and the Bears’ passing game offered little threat.

Rodgers has a challenge on his hands as well against a Tampa defense that’s been downright stingy against the pass through two weeks. Enemy quarterbacks have completed just 56.1% of their throws and are averaging a mere 5.3 yards per attempt with a 54.6 passer rating versus the Buccaneers, and the advanced metrics back up those superb numbers with Tampa Bay yielding a league-best 2.692 yards under expected on pass plays.

Aaron Jones was brilliant in Green Bay’s 27-10 win over Chicago, gaining 132 yards on 15 rush attempts with two total touchdowns, and the Packers may need another big effort from their top back considering the Bucs’ prowess against the pass. Jones is averaging an insane 9.1 yards per carry thus far, and over half of his 181 rushing yards have come after contact.

The Buccaneers have been in the middle of the pack in defending the run but will be without a key cog up front for Sunday’s matchup with Akiem Hicks out with a foot injury.

The veteran lineman owns an excellent run disruption rate of 35.0%, with the league norm for interior defenders being 22.0%.