A Rams Repeat? Our NFC Preview, Win Projections and Playoff Predictions | The Analyst 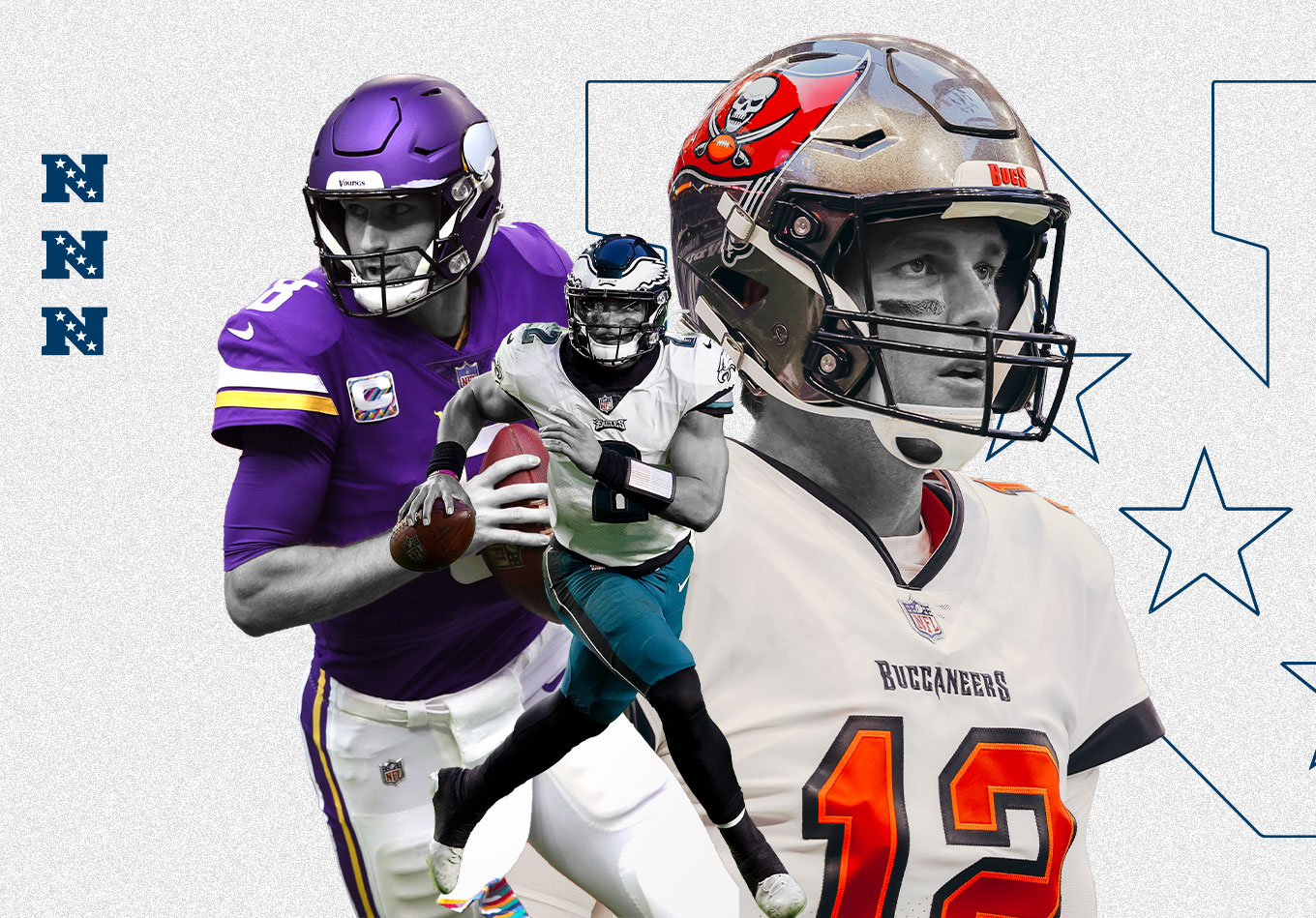 The NFC houses the reigning Super Bowl champions, but it enters the 2022 season viewed as the weaker of the two conferences.

Given the plethora of talented young quarterbacks residing in the AFC, the road to the Super Bowl appears to be an easier one in an NFC where the level of supply at the game’s most important position is not quite as impressive.

But it would be wrong to suggest this is a conference lacking in depth, and there are several teams that could emerge as new and legitimate contenders to represent the NFC in Super Bowl LVII in Arizona.

Which teams are most likely to earn that honor? We preview the NFC with the help of our AI season simulation and preseason position rankings.

No team in the league is seen as having a better chance to win the Super Bowl than the Los Angeles Rams, with our model giving the defending champions a 15.3% chance of retaining the Lombardi Trophy despite the loss of Von Miller and the absence of Odell Beckham Jr, who remains a free agent after tearing his ACL in the Super Bowl.

Here’s how our projections work: Every future game is projected to give a predicted win percentage for each team across its remaining games. The projections are calculated by looking at each team’s quarterback and performance in terms of EVE (yards added in expected passing situations) as well as team values for pass protection/pass rush, skill position players/coverage defenders and run blocking/run defense.

The projected win percentages are then aggregated to produce the forecasted standings, which, of course, have Los Angeles on top in the NFC West.

Even without Beckham, the Rams’ skill position players are ranked fifth, according to our positional rankings. On top of that, the Rams enter the season first in pass rush, third in pass defense and first in run defense. That’s what having Aaron Donald and Jalen Ramsey on the same team will do for you.

Their most obvious competition comes from the team they beat in a divisional round thriller last season, though the Tampa Bay Buccaneers are projected to have just a 6.6% chance to win the Super Bowl by stark comparison.

Despite the loss of center Ryan Jensen to injury and an offseason of change on the interior of the offensive line, the Buccaneers are still ranked sixth in pass protection. Tampa Bay’s ability to justify that lofty position will go a long way to deciding whether Tom Brady – who had more passing plays of 25 yards or more than any other quarterback (42) in 2021 – can lead Tampa to a second title in three seasons.

Brady will have the benefit of a stacked wide receiver group, which is a luxury Aaron Rodgers and the Green Bay Packers do not enjoy as the four-time MVP launches another quest for a second Super Bowl ring.

Rodgers will be tasked with elevating a Davante Adams-less supporting cast to contention. Though the trade of Adams to the Las Vegas Raiders dropped Green Bay’s skill position players to 23rd, the Packers are still projected to win 11.5 games – the third-highest total in the NFL.

That number also has some to do with the continued improvements of a defense ranked third in pass rush and 10th in pass coverage that could give Rodgers the support he needs for a deep postseason run.

Yet all three are projected to threaten double-digit wins in 2022.

Philadelphia, which was blown out in the wild-card round by the Buccaneers, has a win projection of 11.9. That’s the second-highest projection in the NFL behind the Rams, illustrating the strength of the roster and the level of pressure on quarterback Jalen Hurts as he heads into a critical second season as the starter knowing the Eagles have the draft capital to move on from him should he fail to deliver.

The NFC East rival Cowboys have a win projection of 11.0 even after an offseason in which they traded wide receiver Amari Cooper and lost edge rusher Randy Gregory in free agency. Dallas will also start the year without left tackle Tyron Smith after he suffered a knee injury that will keep him out until December.

Though the Cowboys head into the season ranked sixth in pass defense, much of their success in that area was tied to takeaways and an 11-interception season from Trevon Diggs that history says is unlikely to be repeated. This is a roster that lacks depth in several key areas and the onus will be on Dak Prescott to maintain the form that saw him finish 2021 fifth in quarterback EVE (our efficiency versus expected model) for the Cowboys to live up to their projection.

Minnesota is also predicted to produce an 11-win season in their first under the guidance of new head coach Kevin O’Connell, who will have a top-seven quarterback by EVE last season in Kirk Cousins and a skill-position group that goes into the campaign ranked eighth to work with as the Vikings aim to keep pace with the Packers in the NFC North.

The most pertinent question in the NFC surrounds the San Francisco 49ers, who are given just a 10.6% chance of making the playoffs for the third time in four seasons despite possessing one of the better all-round rosters in the league and coming within minutes of beating the Rams in the NFC championship game back in January.

Doubt around the Niners’ ability to contend again is based on the complete unknown that is Trey Lance, the third overall pick from 2021 with just two NFL starts to his name.

Lance takes over for his now backup Jimmy Garoppolo, who was 10th in QB EVE in 2021. The move put San Francisco in the hands of a quarterback who is, for all intents and purposes, coming off a redshirt year – a significant factor behind the Niners’ projection of just 7.1 wins.

Yet Lance is a quarterback with the big-play upside as both a passer and a runner to make an offense that finished first in EVE in 2021 to an even higher level, and he’ll be working with a group of skill-position players ranked as the league’s sixth best.

Supported by a defense that, according to the rankings, boasts the second-best pass rush and a top-seven pass coverage unit, Lance is in a tremendous situation to vindicate his lofty draft status.

Should he do so, an ultra-talented team will likely dramatically outperform their projection. If he endures the kind of growing pains associated with rookie quarterbacks, the Niners may be tempted to revert back to Garoppolo. It’s that range of outcomes that makes the 49ers the most interesting team in the NFC if not the NFL.

The final few days of build-up to the new season have brought some perhaps unexpected hype about the prospects of the New Orleans Saints.

Is it justified? Well, their projection seems to suggest they have a strong chance of making it to the dance. New Orleans is tied with the Los Angeles Chargers tied for the 10th-best playoff odds in the league at 60.0%.

It is not overly difficult to make a case for the Saints, who retain one of the premier defenses in the NFL. New Orleans’ defense is ranked first against the pass and fifth against the run. The coordinator who has overseen that defense, Dennis Allen, is now the Saints head coach after Sean Payton stepped away.

On offense, Alvin Kamara is a dual threat on the ground and as a receiver from the running back position, while the Saints are hoping Michael Thomas can get back to his All-Pro best at wideout after playing just seven regular-season games in the last two years.

The problem is that much of the external belief in the Saints appears to be built on hope rather than evidence. They are hoping Thomas can return to his old self, that Chris Olave can quickly become a rookie sensation at receiver and that Jameis Winston’s encouraging seven-game pre-injury stretch last season was not a mirage.

Simply put, the Saints need a lot to happen for them to truly contend as many seemingly expect them to, but the undoubted quality of their defense does at least give New Orleans a reasonably high floor.

Baker Mayfield and Carson Wentz will each ply their trade in new locations following offseason trades. Mayfield will look to rehabilitate his career with the Carolina Panthers, while the Washington Commanders are the latest team to take a chance on Wentz.

Reality, however, begs to differ.

Even in what was a largely turnover-free 2021 season for the Indianapolis Colts, Wentz was still only 23rd in QB EVE (minimum 100 attempts in expected passing situations).

It’s no surprise, then, that the Commanders are projected to win 7.9 games, and spend another year mired in mediocrity, with Wentz unlikely to be helped by a skill-position group lacking proven playmakers outside of Terry McLaurin and ranked 31st in the league.

Mediocrity will also be the order of the season in Carolina, with the Panthers’ reward for trading draft capital for both Matt Corral and Mayfield being a win projection of 6.9.

Seven wins would represent an improvement for Matt Rhule, but it’s unlikely to be enough to prevent the Panthers from cleaning house at the end of the campaign.