Stingy on the Slab: The Lowest ERA in a Season, Postseason and Career in MLB History | The Analyst 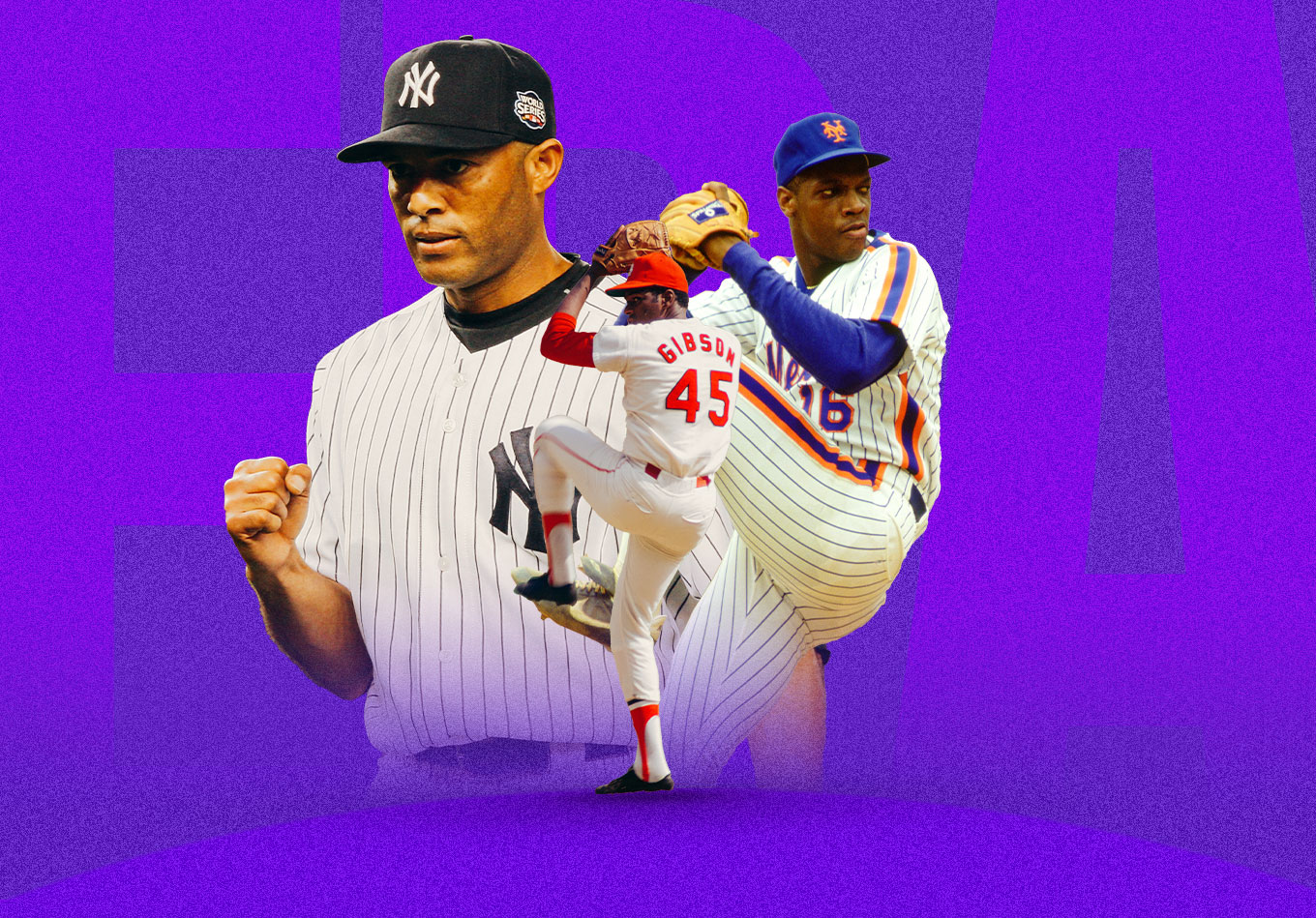 Traditionally, long before advanced metrics threatened to lessen its importance, earned run average has been the No. 1 measure of pitching performance.

Even in more recent years, ERA – along with modern data – has played a prominent role in the American and National League Cy Young races. In 2010, Felix Hernandez of the Seattle Mariners won the AL Cy Young with just 13 wins, largely because he led Major League Baseball with a 2.27 ERA.

In 2018, Jacob deGrom of the New York Mets took home the NL Cy Young Award with only 10 victories. That’s because he also finished with a 1.70 ERA that at the time was the sixth best in a season since the mound was lowered in 1969.

So let’s celebrate the statistic that has stood the test of time by looking at the best regular season, postseason and career ERAs of all time.

Everyone in our rankings has worked at least 73.0 innings over the course of the season.

Lowest ERA in a Single Season (All Time)

Keefe only made 12 appearances in 1880, but the right-hander completed them all and ended up pitching 105.0 innings in the Trojans’ 83-game season. Despite his efforts, Keefe, who was named to the baseball Hall of Fame, only managed a 6-6 record and Troy finished fourth in the National League at 41-42. Say what you want about eras, but Keefe remains the only qualifying pitcher with a sub-1.00 ERA.

With rookie teammate Babe Ruth looking on, Leonard went 19-5 to help the Red Sox finish 91-62 in 1914. Unfortunately, it wasn’t good enough to catch the Philadelphia Athletics in the American League standings. The left-hander was second in the majors with 7.05 strikeouts per nine innings and fourth with a 2.93 strikeout-to-walk ratio.

Brown famously got his nickname after losing parts of two fingers on his right hand in a farm-machinery accident. He ended up using it to his advantage by learning a devasting knuckle-curve grip. Brown was dominant in 1906 for the Cubs, who still holds the modern-era record for the best winning percentage (116-36, .763). He went 26-6 with three saves and nine shutouts over 36 appearances and 277.2 innings.

How good was Gibson in ’68? It’s the only performance in the top 10 that took place after 1915 (so after the dead-ball era). Gibson, who was named to eight All-Star Games, went 22-9 with 13 shutouts while completing 28 of his 34 starts – including one 10-inning effort, two 11-inning outings and one 12-inning gem. He’s one of the main reasons the mound was lowered the following season.

The Mets became a team to be reckoned with once “Doc” Gooden arrived in 1984. And a year after posting the seventh-best ERA by a rookie since 1969, Gooden was even more dominant in ’85 when he led the majors in wins (24) and strikeouts (268). The 1.53 ERA wasn’t too shabby either.

Led by Maddux, Tom Glavine and John Smoltz, Atlanta’s starting pitchers keyed a remarkable division-title run that began in the 1990s. Maddux was at his best in a ’94 season that was cut short by a players’ strike. He led the NL with 202.0 innings, was tied for the league lead with 16 wins and finished third with 156 strikeouts. And, oh yeah, he only surrendered four home runs.

In another shortened season, this time due to the COVID-19 pandemic, Bieber earned the pitching version of the Triple Crown by leading the majors with eight wins (tied with Yu Darvish of the Cubs), 122 strikeouts and a 1.63 ERA. It was the first pitching Triple Crown since Clayton Kershaw of the Los Angeles Dodgers and Justin Verlander of the Tigers both accomplished it in their respective leagues in 2011.

Maddux picked up where he left off a year earlier (second on this list) in a 144-game season that was also impacted by the players’ strike. There haven’t been many pitchers who have been better over a two-year span in baseball history. In fact, there have only been four since 1913 who have posted lower ERAs than Maddux’s 1.60 across 1994-95.

Lowest ERA in a Single Postseason (All Time)

We’ve listed the five pitchers who have had scoreless postseasons by the most innings. Hoyt and Mathewson both pitched 27.0 innings during the 1921 and 1905 World Series, respectively. Unfortunately for Hoyt, he allowed an unearned run in the first inning of a 1-0 loss to the rival Giants in Game 8 – the finale of that best-of-nine series.

Mathewson was nothing short of brilliant in the 1905 World Series, tossing three shutouts against the Philadelphia Athletics. He also had two hits at the plate as the Giants took the best-of-seven series in five games.

In 2006, Rogers worked 7.2 innings in a 6-0 win over the Yankees in the American League Division Series and 7.1 innings in a 3-0 victory over the Oakland A’s in the AL Championship Series. In the World Series, the left-hander allowed just two hits over eight innings in a 3-1 win over the Cardinals. It was Detroit’s only win in the five-game series.

Long before Madison Bumgarner’s epic performance in 2014, Cain had one of his own in the 2010 postseason. He started in the NLDS, NLCS and World Series, allowing 13 hits and one unearned run over 21.1 innings in the three outings. His victory in Game 2 of the Fall Classic helped San Francisco beat the Texas Rangers in five games.

Hubbell had a very old-school effort in the 1933 World Series against the Washington Senators. After giving up two unearned runs while striking out 10 batters in a complete-game 4-2 win in Game 1, the left-hander scattered eight hits and allowed one unearned run over 11 innings in a 2-1 victory in Game 4. The next day, the Giants closed out the Senators with a 4-3 win in Game 5.

Lowest Postseason ERA in a Career (All Time)

When it came to pitching with the game on the line, there was no one better than career ERA leader Mo Rivera. His 42 saves are easily the most in playoff history (Kenley Jansen is second with 19), as are his 96 appearances (Jansen and Ryan Madson are second with 57 apiece). Perhaps most importantly, the Hall of Fame reliever was part of five titles with the Yankees.

In his seven World Series starts, Koufax threw four complete games and struck out eight or more five times. He allowed no runs twice, one run four times and two runs once, but only had a 4-3 record in the postseason thanks to low run support (17). He didn’t need much in Game 7 of the 1965 World Series, firing a three-hitter while fanning 10 in a 2-0 road win over the Minnesota Twins.

Mathewson was off to a great postseason career when he allowed just two earned runs over 47.0 innings in his first five starts. In the 1913 World Series, Mathewson threw a 10-inning shutout to beat the Philadelphia Athletics 3-0 in Game 2. However, he was on the short end against Eddie Plank in the Game 5 finale when he gave up three runs – two earned – in a complete-game 3-1 loss. Speaking of Plank…

Despite his sparkling postseason ERA and his big win over Mathewson in 1913, Plank often ran into tough luck as he ended up with only a 2-5 record over his seven World Series appearances. That’s mostly because he was only given six runs of support over that stretch from the Philadelphia offense.

Believe it or not, the often-injured right-hander has been one of the best postseason pitchers of all time. He’s allowed just nine earned runs while striking out 71 over 55.1 innings in the playoffs. In 2019, Strasburg held the Houston Astros to four runs over 14.1 innings in a pair of victories to help the Washington Nationals win the first title in franchise history.

Lowest ERA Over a Career (All Time)

The right-hander had the eighth-best single-season ERA of all time in 1908, when he went 24-11 with a 1.16 ERA for the Cleveland Naps. That season was his best shot at an elusive World Series appearance. The Naps won 90 games but finished a half game behind Ty Cobb and the Tigers in the AL.

Brown played a key role in the Cubs’ success early in the 20th century, putting together six straight 20-win seasons from 1906-11. The Hall of Famer’s best season came in 1906 when he went 26-6 with a 1.04 ERA that we’ve already mentioned ranks third all time.

That’s right, heading into the 2022 season, Kershaw had the best ERA of any pitcher since the lowering of the mound (again, minimum 1,500 innings). The left-hander had his best season in 2014, going 21-3 with a 1.77 ERA to earn his third NL Cy Young Award. Kershaw also became the first pitcher to win the NL MVP since Rollie Fingers of the Milwaukee Brewers in 1981 (more on him later).

Fingers only made one appearance in 1968, so his career pretty much coincided with the lowering of the mound. The right-hander thrived during the rise of the relief pitcher in the 1970s. He racked up 341 career saves, including a career-high 37 while posting a 2.52 ERA for the San Diego Padres in 1978. During the strike-shortened 1981 season, Fingers saved 28 games while finishing with a career-best 1.04 ERA on his way to winning the NL Cy Young and MVP awards.