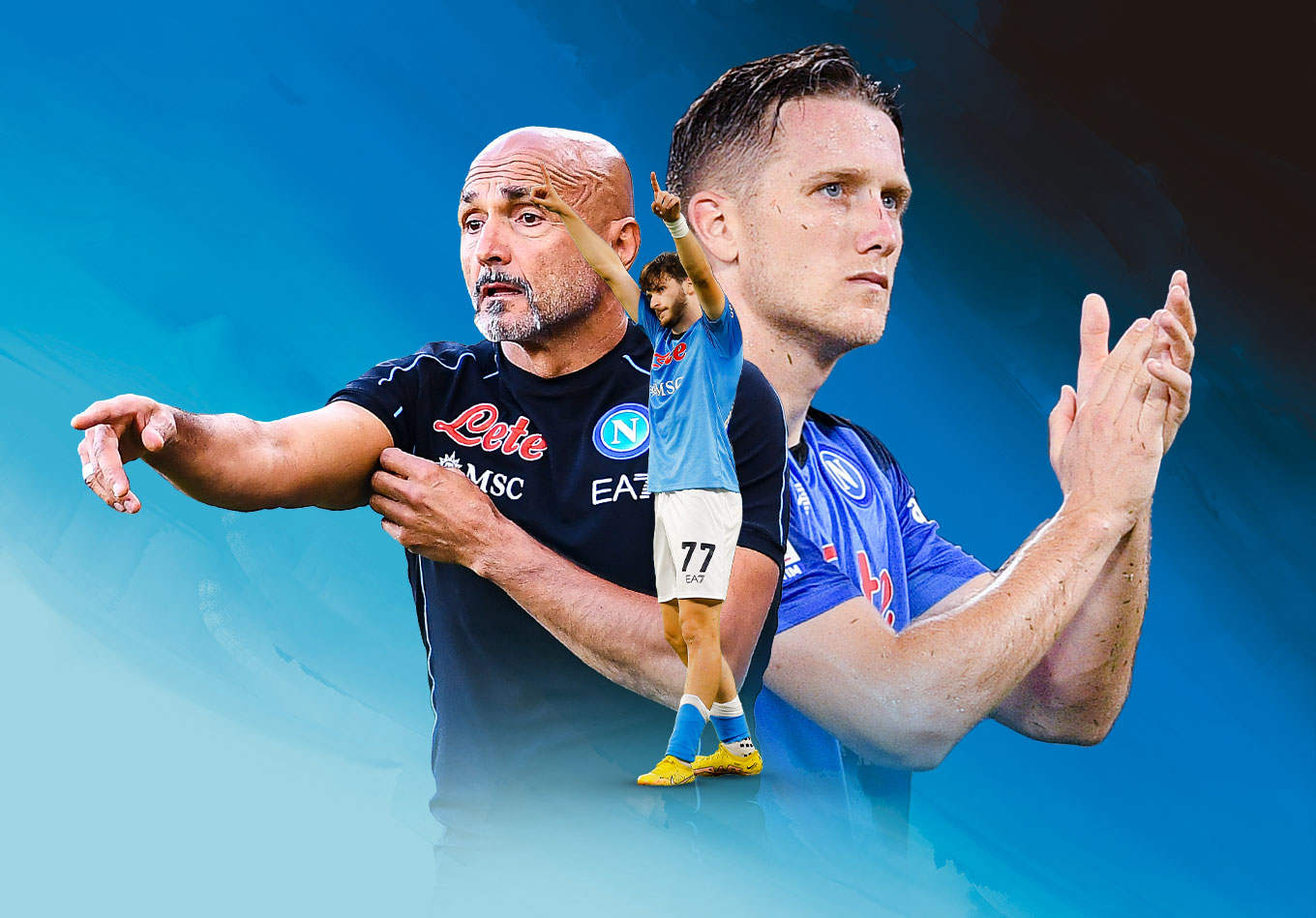 How does a side go about replacing a club legend? There’s always the temptation to go big in the transfer market to make a statement and to show that things are not going to change. Rarely is that the best approach though.

Even if it is possible to find an identical replacement, why should they? All that does is make life more difficult for the new signing. They are directly compared to the former player and supporters expect similar things. They aren’t necessarily being set up for a fall but it doesn’t exactly create an ideal environment for a new player to flourish. The pressure is on them from the off.

There are no right or wrong ways to rebuild a team because, ultimately, it depends on the execution of the plan. With that in mind, you have to admire what Napoli did this summer when tasked with arguably their biggest transfer window ever.

The Serie A side lost captain and talisman Lorenzo Insigne to Toronto FC on a free transfer while all-time leading scorer Dries Mertens, a key fixture within the squad for nine seasons, joined Galatasary after his contract in Naples expired. After years of rumours linking him with a move away, defensive colossus and vice-captain Kalidou Koulibaly swapped the Stadio Diego Armando Maradona for Stamford Bridge.

In the blink of an eye, Luciano Spalletti lost three instrumental players, three players responsible for 34% of the goals scored by the Partenopei last season. There is also uncertainty over the future of midfield maestro Fabián Ruiz, though he remains with the club at the time of writing.

Napoli did make moves, but they opted for shrewd ones as opposed to lavish ones.

Min-jae Kim joined from Fenerbahçe to replace Koulibaly, André Zambo Anguissa turned his loan move into a permanent one and Mathías Olivera was signed from Getafe. Giacomo Raspadori and Giovanni Simeone moved to the club on loan with the duo bolstering Spalletti’s options in attack, having scored a combined 27 goals in Serie A last season for Sassuolo and Verona respectively.

Tanguy Ndombele was signed on loan from Tottenham Hotspur, but it was the arrival of ​​Khvicha Kvaratskhelia that really caught the eye.

He was chosen as the player to replace Insigne.

There was a fear that it might be difficult to replicate the third-place finish from last season. There was even talk that it might be a season of transition. Yet two games into the new campaign, Napoli are top of Serie A having taken maximum points, scoring nine goals in the process.

Granted, the opposition has not been the toughest but the ruthless way in which both teams have been dispatched should not be ignored and Kvaratskhelia has been a game-changing factor in this.

The fleet-footed flyer has been responsible for three of the nine goals and is the club’s top scorer in the league. The ‘Georgian Lionel Messi’ signed from Dinamo Batumi just four months after moving back to Georgia following the suspension of his Rubin Kazan contract. The 21-year-old Tbilisi-native scored eight times in 11 outings in the Erovnuli Liga before Napoli made their move.

It was a bold move, but all signs point to it being the right one.

But how can the Insigne replacement be compared to the former captain when they’re nothing alike? This summer of chance has allowed the Partenopei to make tweaks to their system and we’re already seeing the results of this.

Napoli’s number 77 is the face of Spalletti’s new-look, dynamic side.

Loaded with runners and ball-carriers, the early Serie A leaders are well stocked to blitz opponents.

In the prior iteration of this Napoli side, Insigne was the beating heart of the team and Spalletti had to play to his strengths. He allowed the Italy international to drop deep and act as the playmaker at times. The 31-year-old would frequently move towards the ball and slow the tempo. He wanted to be involved in possession and the 54 passes he averaged per 90 minutes during his final campaign in Italy was the highest average of any forward in the division.

Kvaratskhelia is the complete opposite. The sample size is not the largest, but the difference is already noticeable. The left-winger averages just 33 passes per 90 and is attempting more than double the number of dribbles of his predecessor (7.8 compared to the 3.1 averaged by Insigne). In fact, only Torino’s Nemanja Radonjic (9.9) and Fiorentina’s Jonathan Ikoné (8.3) have attempted more dribbles across the opening two games than Napoli’s new signing.

His arrival has changed the dynamic in attack for Napoli. With so many teams opting for possessional dominance, it is rare to see players running away from the ball. That is exactly what Kvaratskhelia does though and it is why he’s been so effective.

In the scenario above, Insigne would’ve likely dropped into the space highlighted to show for a simple pass into feet. He would’ve looked to turn on the ball and then pick out a pass, perhaps even looking to thread one into the path of Victor Osimhen.

Kvaratskhelia, however, does the opposite.

The 21-year-old moves away from that space and makes a run between the centre-back and the right-back.

Ideally, the pass would’ve been played into the space behind the defensive as opposed to wide but if successful, it isolates Kvaratskhelia against a full-back with a lot of space to play in on the outside as well as inside.

Again, the Georgian sees his side pick up possession in a wide area and instead of holding his position for a simple pass into feet, he immediately looks to make a forward run.

His intelligent movement occupies two defenders, once again. The right-sided centre-back has stepped over to cover for the right-back and this has created space between the central defenders. Space that is noticed by Osimhen as he darts into it (shown by the arrow).

The pass is not played but the situation comes about because of the winger’s aggressive movement when out of possession.

He shows just as much intent when on the ball too.

His carries map (above) epitomises Kvaratskhelia as a player: direct and progressive.

If he is not able to carry the ball into the penalty area, he is looking to stretch the opposition by getting into areas deep on the left-hand side of the penalty area. This is perfectly visualised in the open-play touch locations comparison between him and Insigne (from last season) below.

It might be a cliche but defenders do not want to be pulled into those parts of the pitch.

With him doing this, Napoli are able to create one-on-ones in the final third and a lot of their goals have come during these moments. These situations don’t occur if the wide forwards are getting drawn to the ball and condensing play.

Another thing to note is how reliant Insigne was on penalties during his final year in Naples. He netted 11 times in Serie A but nine of those were via the penalty spot (82%). In fact, in the entire recorded history of Serie A, there’s only been one player to net 10+ goals in a season who’s scored a higher proportion of them via the spot (Franck Kessié in 2020-21 who scored 11 of his 13 goals (85%) via penalties). But despite Insigne’s penalty-kick reliance, he was still a volume shooter, averaging 3.7 shots per 90 last campaign.

In total, Insigne took 81 non-penalty shots during the 2021-22 campaign and these attempts yielded just two goals. As seen in the shot map (above), a high percentage of those efforts were from low-value positions, and he averaged just 0.07 xG per open-play shot.

Kvaratskhelia is much more a goal threat.

You can’t predict what will happen using a sample of seven shots, but this map is interesting nonetheless. His two goals from within the area are from high-value positions while the shots from distance don’t fall into the obnoxiously over-confident category.

If Kvaratskhelia can continue at this rate of 0.38 expected goals per 90, he will be amongst the goals and, perhaps more importantly, he will be impacting the scoreline in open play, not from the penalty spot. Penalties aren’t necessarily ”sticky” and are hard to sustain. But being an effective contributor in open play is far more repeatable. Repeatability breeds sustainability on a football pitch.  It is why the best in the world have unnervingly consistent underlying numbers.

Variance plays a part in goalscoring but, eventually, chances are converted. The skill is getting those chances on a regular basis and Kvaratskhelia appears to be on his way to doing just that.

His manager thinks there is even more to come from the youngster.

“He still has too much pressure on him. As soon as he frees himself from that pressure, he will show people what a player he is. Today there were a few more times when he held up the ball and doubted himself in the one-on-one.”

It is not just him. There are times when the midfield hold onto the ball for too long and ignore runs made by Kvaratskhelia, Osimhen and Hirving Lozano. There is always an adaption period and a few teething problems. We’re seeing this and yet Napoli have still been able to blow teams away. They rank second in Serie A for xG with 4.5, a total that only Roma can better.

The worrying thing for rivals is that this is not the final form of Spalletti’s vision.

The best way to replace a club legend is to give the supporters a new player to believe in. Napoli did just that with Kvaratskhelia. They hope the Georgia international can help deliver them a Serie A crown, their first since the Diego Maradona-led 1989-90 season. That would be more than enough to ensure the Insigne shadow doesn’t loom over the 2022-23 campaign.