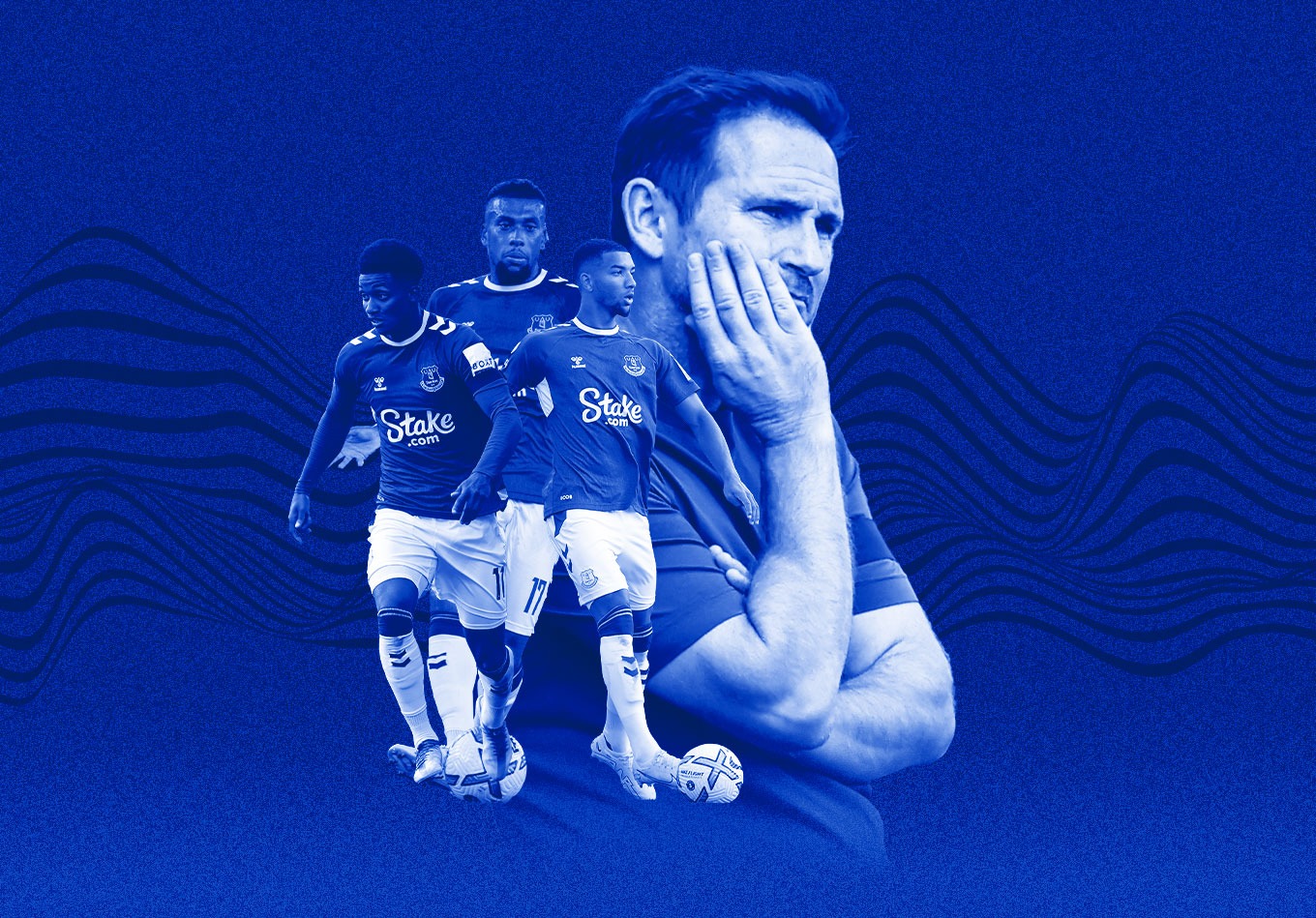 In a division fuelled by melodrama, there’s always a crisis going on somewhere in the Premier League. That’s never more true than during the August silly season, when the league table compulsively lies and it becomes the media’s sacred duty – for the sake of the brand – to ignore the rationalists in the corner pleading to acknowledge the small sample size.

There are plenty of crisis clubs at the moment, but arguably only one whose cowering start to the 2022-23 campaign reflects tactical flaws that stretch back to the season before – and even to the manager’s previous job.

The issues plaguing Frank Lampard’s Everton, namely porousness through central midfield, have been present since his stint as Chelsea manager, when his team’s openness, passivity through the middle, and decompressed formation meant Chelsea were built in his image: a team of Lampards, roaming forward without structural or positional awareness of the counter-attacking space left behind them.

His principles at Chelsea were towards high-pressing, high-energy, high-possession football, and the underlying numbers showed he did a decent job of it, at least in his full season in charge. In 2019-20, the Blues ranked in the top five for high turnovers (175), pressed sequences (573), and PPDA (10.6), and in the top three for total 10+ open-play passing sequences (642). However, this came at a cost: too often his team were overly stretched and unable to shield against breaks.

This feature has only become more pronounced at Everton, even with a possession share and pressing intensity lower than at Lampard’s Chelsea.

The evidence is pretty damning. Over the period of the 2021-22 season in which Lampard was in charge, Everton ranked fourth for total ‘progressive passes against’ with 555, behind only relegated sides Burnley, Norwich City, and Watford. They topped the league for ‘progressive carries against’, with 1462, and their PPDA was 15.5, the fifth highest.

In other words, it has been remarkably easy to pass or dribble straight through this team, likely reflecting an absence of detailed coaching that would ensure the overall shape is compressed and regimented to a Premier League standard.

These figures are scarcely any different so far in 2022-23, and although, yes, while we shouldn’t look too closely at a small sample size, the data shows something very similar to last year.

While their zones of control map shows how easily they are dominated in central areas:

The eye test also shows us it’s more of the same. Everton inevitably sat very deep against Chelsea, while Nottingham Forest’s direct football so far this season hid some of Everton’s weaknesses, but the 2-1 defeat to Aston Villa was a perfect example of their brittle central midfield.

Dropping Back to Plug the Gaps

When he first arrived at Everton, Lampard deployed similar tactical principles as at Chelsea, only to then concede territory and introduce a pragmatic backs-against-the-wall system – with a deeper line of engagement – to grind out results in last year’s relegation scrap.

A defensive setup, with less pressing from the front, inevitably means close support for the midfield and a more compressed shape. Players shuffle neatly across in their own half, rarely stretching their legs other than for targeted and low-volume counter-attacks. This was what we saw in their 1-0 wins against Manchester United and Chelsea at Goodison Park last season, in which the Toffees averaged 27% possession and 14 touches per game in the opposition box.

Lampard appears to have recognised the advantages of a more cautious setup, permanently adjusting his system in 2022-23 to shrink Everton into a conservative formation that minimises the risk of fanning out the midfielders. Significantly, he has switched to a 5-4-1 (the signing of Conor Coady suggests a back five is here to stay) that necessitates compact lines focused on defending within their own half.

The stats also show a change is in progress. Everton are actually applying more pressures per game this year (24.84, up from 15.33 under Lampard in 21-22) but these are happening in deeper areas of the pitch:

It may already be having a positive effect. Everton allowed 60 shot-ending carries from opponents last season under Lampard, the fifth most in the division, whereas in 2022-23 they have so far allowed just six, which is only the 17th most. This could be an early indication that by dropping deeper and inviting pressure, Everton are creating a stronger barrier against opponents carrying the ball into dangerous areas.

Lampard has also sought to address the problem by signing new central midfielders. It doesn’t take a genius to work out that Tom Davies and Iwobi isn’t the most defensively robust duo, hence the acquisition of Onana from Lille and the reported ongoing interest in Paris Saint-Germain’s Idrissa Gueye.

Onana’s inauspicious start at Villa shouldn’t worry Evertonians. Last season in Ligue 1 he recorded a 59.5% duel success rate and averaged 2.1 tackles and 2.0 interceptions per 90 – more than any other Everton player in all three metrics. He adds aggression and defensive resilience, as would former Everton midfielder Gueye. In 2018-19, the last time Gueye was playing in the Premier League, he attempted the joint-most tackles in the division with 142.

New signings and a somewhat shrunken tactical approach should improve the flaws with Lampard’s Everton, but it may also leave supporters wondering where the project is heading. Rafael Benítez was understandably criticised for his negativity and although Lampard is not operating on the same scale (nor does he come with Liverpool baggage) fans may eventually become restless.

Certainly it’s difficult to see Lampard’s tactical recalibration as a long-term solution. It isn’t the vision anyone was sold, and presumably at some point Lampard will want to begin opening up again, especially if he harbours ambitions of climbing back towards the top of the game. If he does so, will the cycle of a porous midfield and draining energy repeat itself?

A more immediate concern for Lampard, however, is the lack of points on the board – and the thought that Lampard’s newfound conservatism might be laying the groundwork for Sean Dyche, who waits in the wings. Signing Dwight McNeil and James Tarkowski is just tempting fate.

Lampard, hired for an aesthetic he no longer feels able to coach, may be running out of time.