Is Liverpool’s Premier League Title Bid Over After Two Games? | The Analyst 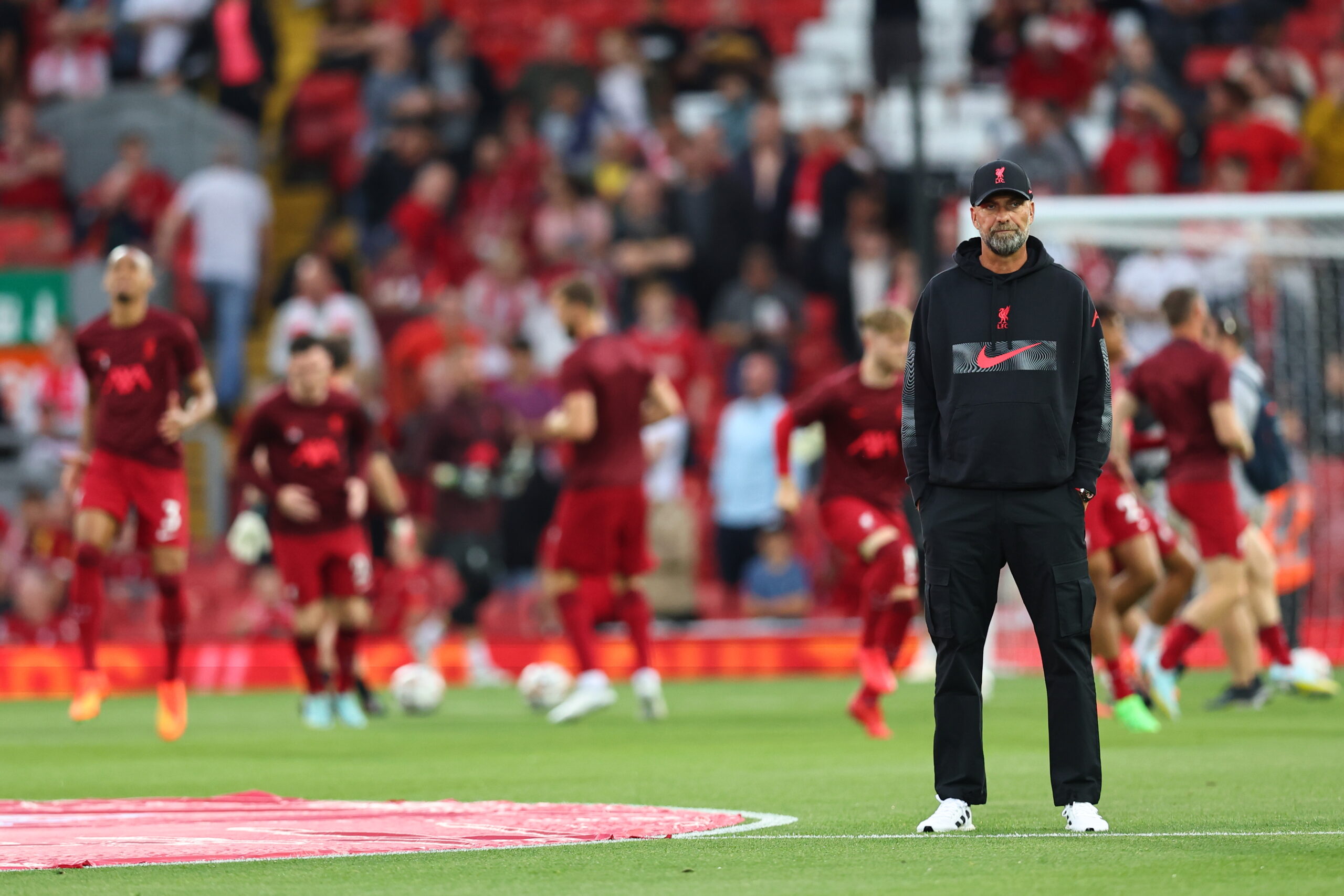 Having lost out on Premier League titles to Manchester City by a single point in both 2018-19 and 2021-22, Liverpool are well versed in how the smallest slip can cost you the biggest prize. So the fact Jürgen Klopp’s team already trail Pep Guardiola’s gleaming champions by four points is a huge early season red flag.

As it stands — and, yes, we realise how extreme this sounds in mid-August — City can already afford to lose to Liverpool this season and remain above them in the table. It’s not a marathon, it’s not even a sprint anymore, it’s a 24/7 HIIT workout where the comments section comprises of every single person in the world and they all have a strong opinion about what is and isn’t going wrong.

For the sort of person who doesn’t like looking at league tables until 10 games into the season the recent high points totals recorded by Premier League clubs is a concern. Because with only 114 points available all season, dropping, say, four in your first two games could very well be a disaster. There have only been 15 occasions in English top-flight history of a team posting 90+ points in a season and seven of them have come since 2017. Was the world a better place when a club could amble around in the autumn before picking up form in the New Year? It’s not for me to say, but there are many phrases that reference the conclusion of the season (business end, the run-in, squeaky bum time) yet very few about the start. Teams who find form towards the back end of a season have been historically respected for dealing with whatever autumnal existential issues they were suffering, but those days are seemingly gone. Only 15 clubs in English top-flight history have failed to win either of their opening two games and still won the title. Here they are, grouped into handy little era categories.

Footage of Newcastle playing Liverpool in 1901 emerged this week, and it’s as beautiful and alien as you might imagine. Semi-circular goal areas and ‘keepers in the same kit as their team-mates like Aaron Ramsdale, it was a different time. And only a few years after that game Liverpool became the first team to lose two in a row at the season’s start and still win the league, in this case four points clear of 19th century icons Preston North End. This was a time when travel to away games was often problematic, injuries disruptive and outcomes pretty random. Aston Villa lost 16 times in the 1929-30 season and still came fourth, not that it counted for a Champions League spot. Liverpool in 1906 started a trend that they’ll hope to extend in 2023, and Sunderland (D1 L1) and Burnley (L2) added their name to the list in 1913 and 1921 respectively.

Marathon Not A Sprint Rating: High

Before the Premier League began in 1992 people rarely used to compare achievements and records back to 1888 because they understood that the game had gone through many iterations. Post-war was the historical moment they used (football didn’t start in 1946, guys!) and it’s understandable, because the 1950s, 60s and 70s saw some of the most celebrated and varied title battles in the nation’s history. In the 20 years between 1956 and 1976 there were seven (!) instances of a team failing to win either of their first two games and still going on to win the league. This era is precisely why the idea that a team can not only recover from a slow start but that it might actually be preferable is so embedded in the footballing folk memory. Don’t start too quick, it’s unbecoming of a football club. Claw your way up the table in a respectable way.

Marathon Not A Sprint Rating: Extreme

If there is a poster season for an English football club starting slowly and still winning the league then it is surely Liverpool in 1981-82. They won only five of their opening 15 league games, were wallowing around in mid-table at Christmas yet still finished top after a run of 13 wins and three draws from their last 16. If Jurgen Klopp wants to lean on club history to convince his players it’s not over then this is the campaign to focus on. Merseyside rivals Everton did similar in 1984-85 while Manchester United in 1992-93 ensured that the Premier League era would contribute to this trend. United failed to win any of their opening three games in that season and the concern was so great that it hastened the look for a new forward, with Eric Cantona the result. Will 2022-23 Liverpool go back into the transfer market in the next few weeks? Should they?

Marathon Not A Sprint Rating: Iconic

Since performing well for the entirety of the season has become an important trait during the Premier League years, instances of teams failing to win either of their opening two games and still ending as champions have become almost vanishingly rare. Alex Ferguson seems to be the last of an old breed of managers who could stare out the league table and turn a slow start around. His 1998-99 team started slowly but were unbeaten in all competitions from December onwards and have the trophies to show for it. And 2007-08 — as it stands the most recent slow start/title win season — saw United and Cristiano Ronaldo (sent off in game number two away at Portsmouth) bounce back to win a Premier League and Champions League double. This sort of thing simply doesn’t happen any more, although everyone at Liverpool will, for once, be hoping they can emulate their great rivals.

Marathon Not A Sprint Rating: Fading

After next Monday’s game between Manchester United and Liverpool, one or both clubs will have recorded a three-game winless run. As mentioned above, United in 1992-93 and 2007-08 both bounced back from no wins in the first three to win the title, but overall this even sterner task has only happened eight times. Should Liverpool’s sloppy start continue then they may have to hope they can do a Sunderland 1912-13; who didn’t win any of their opening seven games (D2 L5) but still recovered to win the title. But those hopes would be forlorn. It’s almost impossible that Sunderland’s achievement will ever be repeated and if you look at every trend in contemporary Premier League football then it’s pretty likely that the 2022-23 title has already slipped out of Liverpool’s grasp.