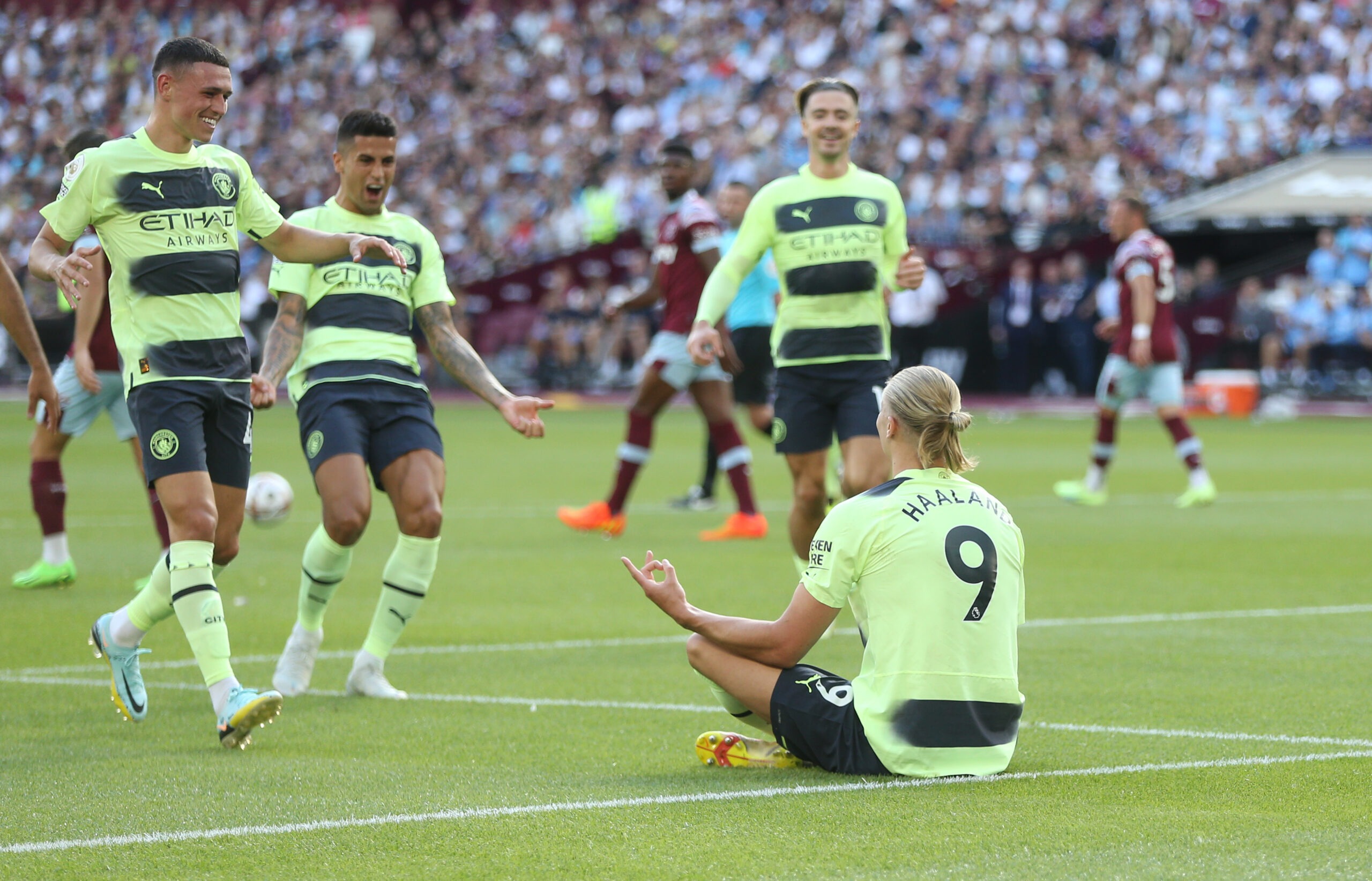 When Erling Haaland troubled the King Power crossbar against Liverpool in the Community Shield (a chance that was ultimately irrelevant given the scoreline and the amount of time remaining), the internet shook almost as much as the midlands goal frame. This was a glaring miss from arguably the Premier League’s most important import. A rising superstar has moved to the English top-flight in the embryonic stage of his career rather than later on, looking for a payday after it hadn’t worked out in another competition. A Bergkamp Situation, as it’s known.

Okay, Haaland being born in northern England to a father who played for the very club he now represents is the sort of marginal gain that has helped City out but it’s still one of the two biggest Gen-Z superstars on planet earth moving to a club that has – in living memory – lost league games home and away to Wycombe. Is he any good though? Was that close-range howler in Leicester a sign that Haaland is not ready for the Premier League?

No. The mistake some people made was treating the Community Shield as a real game. It’s a friendly, albeit one with an extensive Wikipedia page. The real football started this weekend and Haaland tore through West Ham like a bear demolishing a privet hedge. Two goals, a penalty and a neat finish from an effective and terrifyingly repeatable Kevin De Bruyne through ball got him off to the sort of start that launched a footballing reverse ferret, the sound of Haaland takes being shredded so loudly it could be heard in Norway.

Haaland thus became the 30th player in Premier League history to score 2+ goals in his first appearance. And while Fabrizio Ravanelli [import category: classy late 20s striker searching for a payday] survives another week as the only player to score three debut goals, if we study all of those multi-goal introductions then where, one match into Erling Haaland’s Premier League career, does it feel like he’ll end up?

Four of the 30 players to score 2+ on their Premier League did so on that holy date of August 15, 1992, aka Day One of the newly formed competition. Yet all four had scored in the previous iteration of the top-flight, so it feels slightly tenuous to include them, even if they include a certain Alan Shearer, making his Blackburn Rovers debut away to Crystal Palace. They were goals number one and two of a record 260 in the Premier League and while Harry Kane attempts to whittle his way to Shearer’s record, it doesn’t feel like Haaland will stay in the division long enough to shatter Shearer’s tally, or will he?

The other 15/08/92 representatives are Lee Chapman (23 career Premier League goals), Mark Robins (25) and the iconic Brian Deane (71). Can Haaland outscore each of them? Or perhaps all of them combined? Possibly.

Haaland’s brace at London Stadium unleashed a tidal wave of excitement but a debut Premier League brace can also be a footballing false dawn. Take Regi Blinker, a goalscoring winger who had scored regularly for Feyenoord and who bagged two against Aston Villa in his first Sheffield Wednesday appearance in 1996. Two goals was good, signing for two clubs (Wednesday and Udinese) at the same time was less ideal, and Blinker served a worldwide ban, as well as scoring only one more Premier League goal for the Owls. A lot of clubs were keen to sign Erling Haaland this summer but we can be 100% certain that he has only inked a contract with one of them.

There’s the young prospect who never follows up, like former Manchester United tyro James Wilson, who also only added one more Premier League goal after his debut brace against Hull City in 2014. And while it’s too early to say that Odsonne Édouard’s Crystal Palace career began with an incredibly rapid pair of goals that heralded a false dawn, he has only added four more since embarrassing Tottenham Hotspur last September. Will Haaland score more than three goals? Yes. More than six? Also yes.

Into the realm of the solid professionals. Players who started with a bang and who were absolutely referenced in that weekend’s MOTD analysis but whose Premier League careers, for whatever reason, can be categorised as decent, rather than spectacular. Michu, for example, scored the first goal of the 2012-13 Premier League season as part of a brace away at QPR but was very much a one-season wonder. The aforementioned Fabrizio Ravanelli followed up his debut hat-trick with 13 more goals for Middlesbrough in 1996-97 and then added nine more for Derby County five years later but as memorable as he remains, his Premier League contribution was short-lived and ephemeral, like the reverence for grey hair. See also: Mido, Milan Baros and Alen Boksic. You can see why clubs sought them out, and they arguably did what they were required to, but this isn’t the landscape Haaland wants to operate in. He surely has a reasonable chance of scoring more than 30 goals this season which would see him overtake all the players mentioned in this section in only one campaign.

This is where we expect Erling Haaland to figure. Like the Norwegian, Sergio Agüero started his Premier League career with a brace and ended it as the top-scoring overseas player in the competition’s history. Not many expect Haaland to remain with Manchester City for the vast majority of his career but back in 2011 people thought exactly the same thing about Agüero. Should City’s Norwegian move on in his 20s then a better potential proxy for him is Ruud van Nistelrooy, someone who played five seasons in England, and scored 95 goals in 150 Premier League games. Deadly, effective northern European goalscoring prowess. It never goes out of fashion.

Can Haaland become the new Ruud? He’s started off being a bit rude, if that helps.