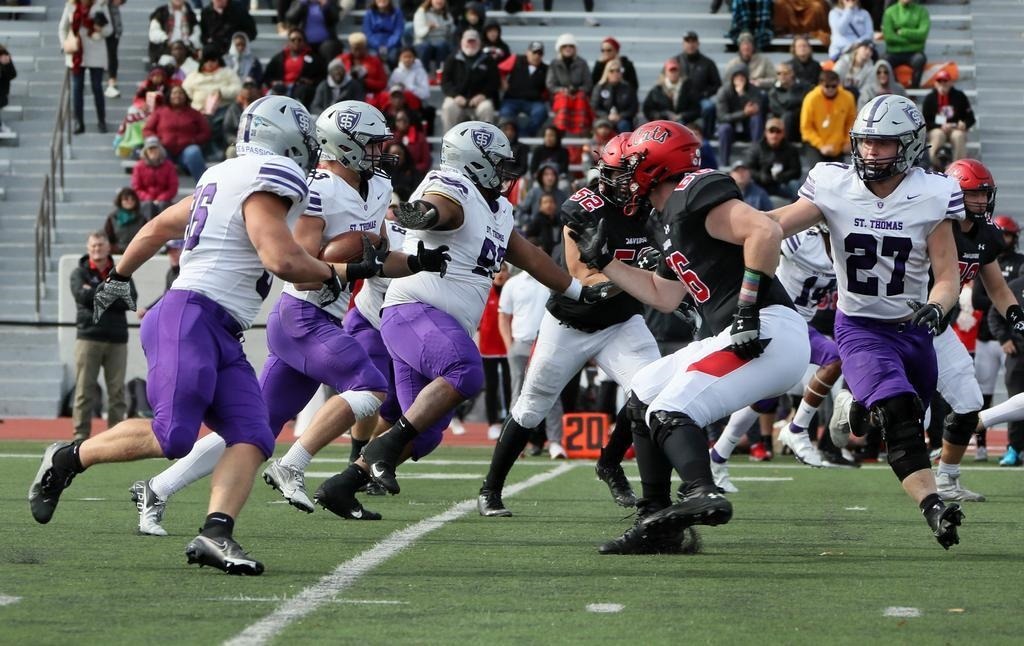 The wild card in the 2022 Pioneer Football League season is not a team, but a position – quarterback.

Many of the 11 teams will have a new starter, if not uncertainty, behind center.

Only one returning quarterback, Butler’s Bret Bushka, passed for even 900 yards last season. Stetson’s Alex Piccirilli was named to the PFL’s preseason team, even though he has thrown twice as many interceptions (14) as touchdowns (seven) over the last two seasons.

The QB factor should make for a wild ride across the PFL as the league celebrates its 30th anniversary season. Davidson and San Diego shared the league title last fall, although Davidson earned the automatic bid to the FCS playoffs for a second consecutive season.

Here’s a quick look at the upcoming PFL season:

1. St. Thomas (7-3, 6-2) – In their PFL debut, coach Glenn Caruso’s Tommies ranked first in the league in total defense (296 yards allowed per game) and scoring defense (17.8 points allowed per game). Senior offensive lineman Matt Weimann was the Tommies’ only representative on the 2021 All-PFL first team, and he’s back to block for Hope Adebayo, the league’s offensive freshman of the year. Even if it wins the PFL championship, the second-year Division I transitioning program is not eligible for the FCS playoffs.

2. *Davidson (8-3, 7-1) – The Wildcats aim for a PFL three-peat behind the FCS’ No. 1-ranked rushing offense (336.6 yards per game), which again features Dylan Sparks (1,624 career yards, 13 touchdowns) and Coy Williams (1,528, 25) plus slot back Aris Hilliard. Coach Scott Abell’s squad has won seven straight home games and is 18-5 at Richardson Stadium through his first four seasons.

4. Dayton (6-4, 5-3) – Coach Rick Chamberlin needs one more win for 100 in his career, and the Flyers enter the season just three games shy of scoring in 500 in a row. All-around threat Jake Chisholm (31 career touchdowns) will keep finding the end zone. While quarterback is the only position in need of a new starter, the Flyers return only three starters on defense.

6. Stetson (4-7, 2-6) – Although not a big-time passer, QB Alex Piccirilli has rushed for 749 yards and 11 touchdowns in his career. The Hatters’ premier player is defensive end Fermon Reid, who enters his final campaign with 31 tackles for loss and 14.5 sacks. The PFL road schedule is brutal: at San Diego, Dayton, Davidson and St. Thomas.

8. Drake (2-9, 1-7) – One of the charter members of the PFL suffered through its worst season in the league. The Bulldogs need a healthier season out of quarterback Ian Corwin, but whoever is behind center can always look to big-play wide receiver Colin Howard, who averaged 21.1 yards on 26 catches last season. Only punter Shane Dunning made the PFL’s preseason team.

9. Valparaiso (4-7, 4-4) – Valpo will find it hard to replace the offense of running back Robert Washington, who accounted for the highest percent of scrimmage yards (43.4; 1,443 of 3,415) on any FCS team last season. The Beacons surely won’t lack for special teams success with the likes of kicker Brian Bartholomew and returners Josh Bechton and Chuck Maxwell.

10. Butler (3-8, 1-7) – New coach Mike Uremovich, who spent the last three seasons on the Temple staff, has a solid returning trio in the offensive skills positions with quarterback Bret Bushka (1,663 passing yards last season), running back AJ Deinhart and wide receiver Johnny O’Shea. But the Bulldogs have to improve against the run after ranking last in the PFL while allowing 204.4 yards per game.

11. Presbyterian (2-9, 0-8) – A coaching change to Steve Englehart (previously Florida Tech’s coach) was good news after the Blue Hose had a reckless style in one season under Kevin Kelley, including an absurd -29 in turnover margin. The decline followed the Blue Hose going 4-3 in their first PFL season in spring 2021. Wide receiver Jalen Jones caught eight touchdowns and Delvecchio Powell II added another seven plus 1,121 yards from scrimmage last fall.

Hope Adebayo, RB, St. Thomas – Adebayo finished strong as a freshman, rushing for 535 of his 658 yards and 11 of his 12 touchdowns in the Tommies’ last five games.

Jake Chisholm, RB, Dayton (Walter Payton Award preseason nominee) – The two-time 1,000-yard rusher ranked first in the FCS in all-purpose yards per game in 2019 (204.3) and second last season (169.4). He racked up 334 all-purpose yards and matched the school record with five touchdowns as Dayton handed Davidson its only PFL defeat.

Fermon Reid, DE, Stetson – Consistency is the calling card for the two-time PFL first-team selection (with a second-team season as well). He’s had between 25 and 36 tackles (and six to nine for loss) in each of his four seasons (three full).

Davidson at San Diego (Nov. 12) – These two teams have combined on the last six PFL bids in the FCS playoffs.

The PFL and Ivy League, which have non-scholarship programs, are not playing FBS opponents this year.

Ten states, stretching from New York and Florida to California, are represented in Division I’s only non-scholarship football-only conference. Indiana is home to two members (Butler and Valparaiso).