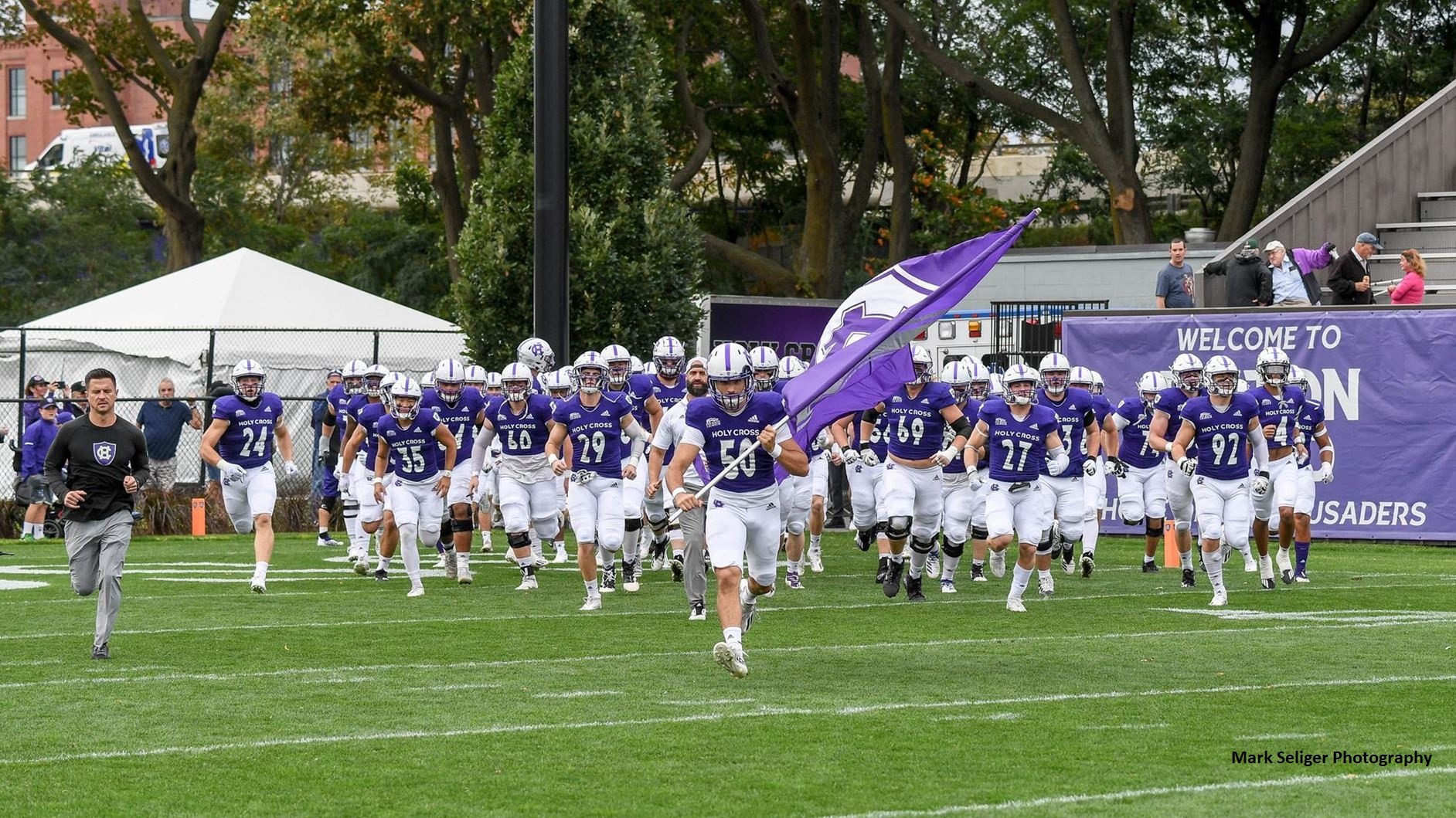 The 45-year-old Chesney has built a mini-dynasty in the Patriot League, winning the last three championships. This season, Holy Cross seeks to match the 1998-2001 Lehigh squads as a second PL program to win four straight titles. The Crusaders could become the first with four outright titles in a row.

The return of 17 players who earned a form of All-PL honors last season creates the possibility of Holy Cross being one of the strongest teams in league history. However, Fordham’s veteran lineup appears formidable, Colgate only lost in the league to Holy Cross last season, and veteran quarterbacks abound.

Here’s a quick look at the upcoming Patriot League season:

2. Fordham (6-5, 4-2) – A veteran lineup returns to take aim on what would be Fordham’s first PL title since 2014. Seven Rams were named to the league’s preseason team – quarterback and two-time PL offensive player of the year Tim DeMorat, wide receivers Dequese Carter and Fotis Kokosioulis, running back Trey Sneed, offensive lineman Phil Saleh, defensive lineman Jonathan Coste and linebacker and 2020 PL defensive player of the year Ryan Greenhagen – and that group doesn’t even include linebacker James Conway, who was second in the FCS in tackles per game (11.9). In addition, the Rams’ opponents were a combined 41-82 (.333) last season.

3. Colgate (5-6, 5-1) – The Raiders won their final three games to complete coach Stan Dakosty’s first season with a second-place finish. They finished fourth in the league in scoring offense, scoring defense, total offense and total defense, so there’s room for improvement. Michael Brescia, the 2021 PL rookie of the year, nearly rushed for as many yards (568 with nine touchdowns) as he passed for them (614), wisely following the blocking of 6-foot-4, 305-pound offensive lineman A.J. DeSantis. Linebacker Tyler Flick expects to build on a breakout season of 65 tackles.

4. Lehigh (3-8, 3-3) – After opening last season without scoring a touchdown in five games and starting 0-8, the Mountain Hawks went 3-0 in November. Coach Tom Gilmore’s squad seeks to build on the momentum behind the PL preseason trio of defensive lineman Mikhari Sibblis and defensive backs TyGee Leach (69 tackles, eight pass breakups) and LaTrell Wimberly. The offense has a number of veterans, including quarterback Dante Perri, running back Zaythan Hill (844 career rushing yards, 10 TDs) and running back Eric Johnson.

5. Lafayette (3-8, 2-4) – New coach John Troxell is only the third alum to guide the Leopards program that enters its 141st season. The defense ranked second in the league behind defensive end Malik Hamm (184 tackles, 38 tackles for loss and 23.5 sacks in a 37-game career) and and linebacker Marco Olivas (10.7 tackles per game last season to rank seventh nationally). Sophomore quarterback Ah-Shaun Davis will keep maturing after a solid rookie campaign, but the pass protection must improve a lot.

6. Georgetown (2-8, 1-5) – The Hoyas are the only PL team that is not returning its main quarterback from last season, but Pierce Holley started four times and played in six games, passing for 403 yards against Columbia and 1,295 overall. Wide receiver/returner Joshua Tomas ranks fifth in school history with 3,248 all-purpose yards. The Hoyas, who have never won the league title, must halt the late losses after dropping three games in which they were leading or tied through three quarters.

7. Bucknell (1-10, 0-6) – Bucknell often fell behind in the first half while being outscored 417-104 last season – a -313 point differential that was the worst in the FCS. A healthier campaign out of defensive back Gavin Pringle will go a long way with improving a defense that ranked an uncharacteristic sixth in the league. The offense particularly struggled, but gets back its two QBs who split playing time – Nick Semptimphelter and Ethan Grady.

Ryan Greenhagen, LB, Fordham (Buck Buchanan Award preseason nominee) – An NFL prospect, Greenhagen played only four and a half games last season due to a knee injury. His 31 tackles against Nebraska marked the Division I single-game high since NCAA defensive statistics began in 2000. A week later, he corralled 28 stops against Monmouth.

Holy Cross at Colgate (Sept 24) – Colgate was the PL’s most recent champ before Holy Cross (2018). Only one game separated them in last year’s standings, but the Crusaders won the head-to-head meeting 42-10.

Fordham at Holy Cross (Oct. 29) – The Crusaders have outscored Fordham 194-108 in winning the last five meetings, including 52-24 last season. DeMorat has passed for 1,282 yards and eight TDs in four career matchups, but he’s been sacked 15 times.

Lehigh at Lafayette (Nov. 19) – College football’s most-played rivalry will turn 158, with Lafayette leading 80-72-5 all-time. In seven of Lehigh’s last 10 wins in the series, including last season, it has scored a defensive or special teams touchdown.

Holy Cross will seek a second consecutive FBS win, having opened last season with a 38-28 triumph at UConn. Four of the Patriot League’s six FBS opponents (Army, Buffalo, Ohio U. and Temple) have lost to FCS teams since 2015.

The PL schedule of FBS matchups: