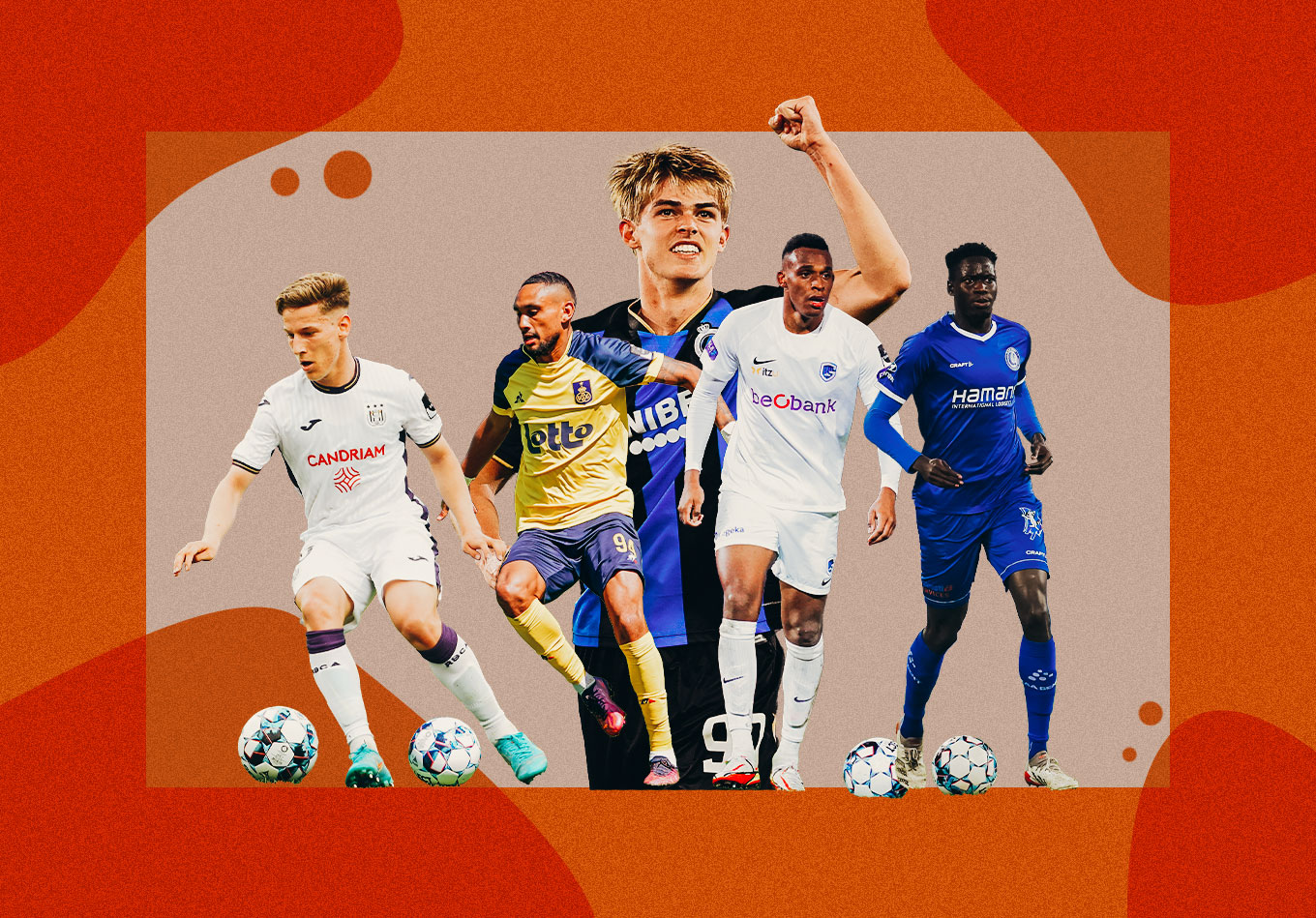 Young Guns: Five Stars in Belgium Who Your Club Might Buy Next

After winning their third straight title, Club Brugge are looking to become the first club since Anderlecht in the 1960s to record a streak of four. But while Blauw-Zwart have an almost exclusive right on the title nowadays, that most definitely is not the case for talent.

In recent years, the talent factory that is the Belgian Pro League has produced top-tier talent all around the league.  For Kevin de Bruyne, KRC Genk turned out to be the perfect spot for his development; Jonathan David made his way to Lille through AA Gent, Axel Witsel calls Standard Liège’s Stade Maurice Dufrasne his old stomping ground and of course, it all started at Anderlecht for Romelu Lukaku. Club Brugge have done their part by delivering players like Ivan Perišić and Arnaut Danjuma too.

With the new season coming up, there are again some exquisite talents looking to graduate from the Pro League School of Excellence and conquer the world one step at a time. The Analyst looks at five players that we expect to make the grade soon.

Recently, RSC Anderlecht have developed a tradition of finding, nurturing and developing young, talented and technically gifted midfielders. After selling youth products Youri Tielemans, Albert Sambi Lokonga, Dennis Praet and Leander Dendoncker to Monaco, Arsenal, Sampdoria and Wolves respectively, another one might soon follow them to one of Europe’s top competitions.

Yari Verschaeren – having just turned 21 – made his Pro League debut for the Mauves back in November 2018, at the tender age of 17 years and 136 days old, scoring his first Belgian top-flight goal just two months later against KAS Eupen.

Having played more than 20 matches in each of his four seasons for the Brussels side in the Pro League, Verschaeren ended the 2021-22 campaign on exactly 100 league games.  In doing so, he became the second-youngest player to hit the 100-cap mark in recent history. Look who’s top.

In his 100 Pro League matches, Verschaeren has scored 17 goals and assisted 13 more, making the small midfield maestro the youngest player still active in the competition to have had a hand in at least 30 goals.

While the youngster is still a work in progress, especially defensively, Verschaeren has already displayed a lot of maturity when in possession. He is by far the youngest of only four players to average at least 85% passing accuracy paired with at least 25 created chances from open play in the league last season.  In fact, in recent years, the only players that managed that feat at age 21 or younger were Verschaeren, Sambi Lokonga and Praet. His future looks bright.#

Charles De Ketelaere, already dubbed CDK because we live in 2022 and abbreviating things is cool, burst onto the scene when he surprisingly started for Club Brugge in their UEFA Champions League home match against European giants Paris Saint-Germain. Weirdly, this game meant he was one of the few players to have played in a Champions League tie before actually making their league debut.

Scoring in both group league games against Zenit St. Petersburg in October and December 2020, ‘King Charles’ ended up in a very exclusive list, one that also contains the likes of Raúl, Kylian Mbappé, Erling Haaland and Phil Foden: the Belgian international (four caps as of the summer of 2022) is one of only ten players to have scored in both UEFA Champions League group stages games against a specific opponent in a single season before turning 20.

In his three Pro League seasons so far, Charles De Ketelaere has been directly involved in 35 goals (19 goals, 16 assists), with 23 of those coming in the 2021-22 campaign (14 goals, nine assists) – only six players had a hand in more goals in the past Pro League campaign. In fact, among all players with at least 10 goal contributions in the Belgian top-flight last season, only Verschaeren (born in July 2001) and Joshua Zirkzee (born in May 2001) were younger than de Ketelaere (born in March 2001).

But aside from his direct offensive output, the light-footed de Ketelaere has another weapon in his arsenal: his dribbling skills. In the Pro League 2021-22, just four players completed more take-ons than CDK.

His dribble success rate of 49.6% (55 of 111 completed) is also the highest in the competition among players with 90+ attempted dribbles. The fact that Italian giants AC Milan have already come knocking isn’t that surprising for an attack-minded player that is comfortable as both a false nine and as an attacking midfielder.

This Belgian Pro League 2022-23 scouting guide wouldn’t be complete without a player from last season’s big upset. Royale Union Saint-Gilloise, newly promoted to the Belgian top-flight, ended up winning the regular season, before seeing Club Brugge claim their third consecutive Pro League title after a good run in the play-offs.

Last season’s top scorer Deniz Undav got his big break last season with his summer move to Brighton already agreed last winter, while other standout players such as versatile forward Dante Vanzeir and versatile central midfielder Casper Nielsen could still yet depart from Brussels. A big win for Union was the fact that left wing-back Loïc Lapoussin promised to stay, even renewing his contract until 2025 with an option for another season.

Lapoussin, born in France but internationally representing Madagascar, was one of last season’s revelations with his dribbles, carries, runs, speed and – especially important in his position – his gigantic lung capacity.

Lapoussin boasts all the characteristics of a modern offensive wing-back, outperforming even the most technically gifted wingers when it comes to dribbling, while his carry numbers are even more impressive as there is usually less room to easily move the ball upfield on the wings of the pitch.

Lapoussin even managed to add substance to it, by either creating or taking a shot after 32 carries, a tally only second behind Joris Kayembe (34) among defenders. Union fans can be very happy that their Malagasy marathon runner has extended his contract at the Stade Joseph Marien, hoping that he might eventually bring them their first title win since 1935. They should cherish their best-kept secret for as long as they can.

Jhon Lucumí could be Colombia’s leading centre-back for the next decade. The tall, strong and fearless KRC Genk stopper has lured many admirers with his passing skills and ability to almost exclusively make the right decisions in possession.

As can be seen in the table above, Lucumí has a hand in a lot of KRC Genk’s attacking output. Among central defenders, the Colombian giant finished last season in the top five in almost all involvement-related statistics.

Among all players with 1000+ passes in the 2021-22 Pro League campaign, Lucumí ranks first with a passing accuracy of over 90%, completing a whopping 1629 of his 1803 attempted passes to a team-mate. His ability to both be secure in possession and be productive with it is what makes him a much-coveted defender.

For a central defender, the 24-year-old is remarkably shy in duelling opponents. His rate of 5.6 duels per 90 actually ranks near the bottom in volume when it comes to defenders. But when he does engage, he wins those duels more often than not (56%).

In a summer in which big European sides scour the leagues for left-footed centre-backs that are actually able to handle responsibilities in possession, Lucumi could well soon come into demand.

One can be forgiven for mixing up Gent and Genk when travelling to Belgium and as much as Gent will have hoped for Lucumi to take a wrong turn and end up at the Buffalos, fans of Racing Genk must have hoped that Joseph Okumu would’ve ended up in their neck of the woods as well. In terms of defensive talent, Okumu is Gent’s rock-solid answer to the more polished Lucumi.

Signed from Elfsborg last summer, the Kenyan defender has developed himself as one of the most interesting natural defenders in the league, dominating attackers at will and boasting the second-highest duel success percentage in the league.

His reputation as a hands-on defender is only enhanced by the fact that he ranks in the top 25 for blocks (12th with 24) and clearances (24th with 92). On average, he won possession 7.7 times per 90 last season, the fourth highest rate in the league among defenders with over 1,000 minutes played.

In possession, there is still plenty for the 25-year-old to work on. His passing in general is fairly pedestrian compared to his defensive qualities, only managing a passing accuracy of 77% last season. That has not deterred clubs from showing interest though, with Dortmund, Celtic and Arsenal among those interested. Can Okumu take another step in his development next season?