They Were Shown the Money: The Highest Paid Players in NFL History | The Analyst 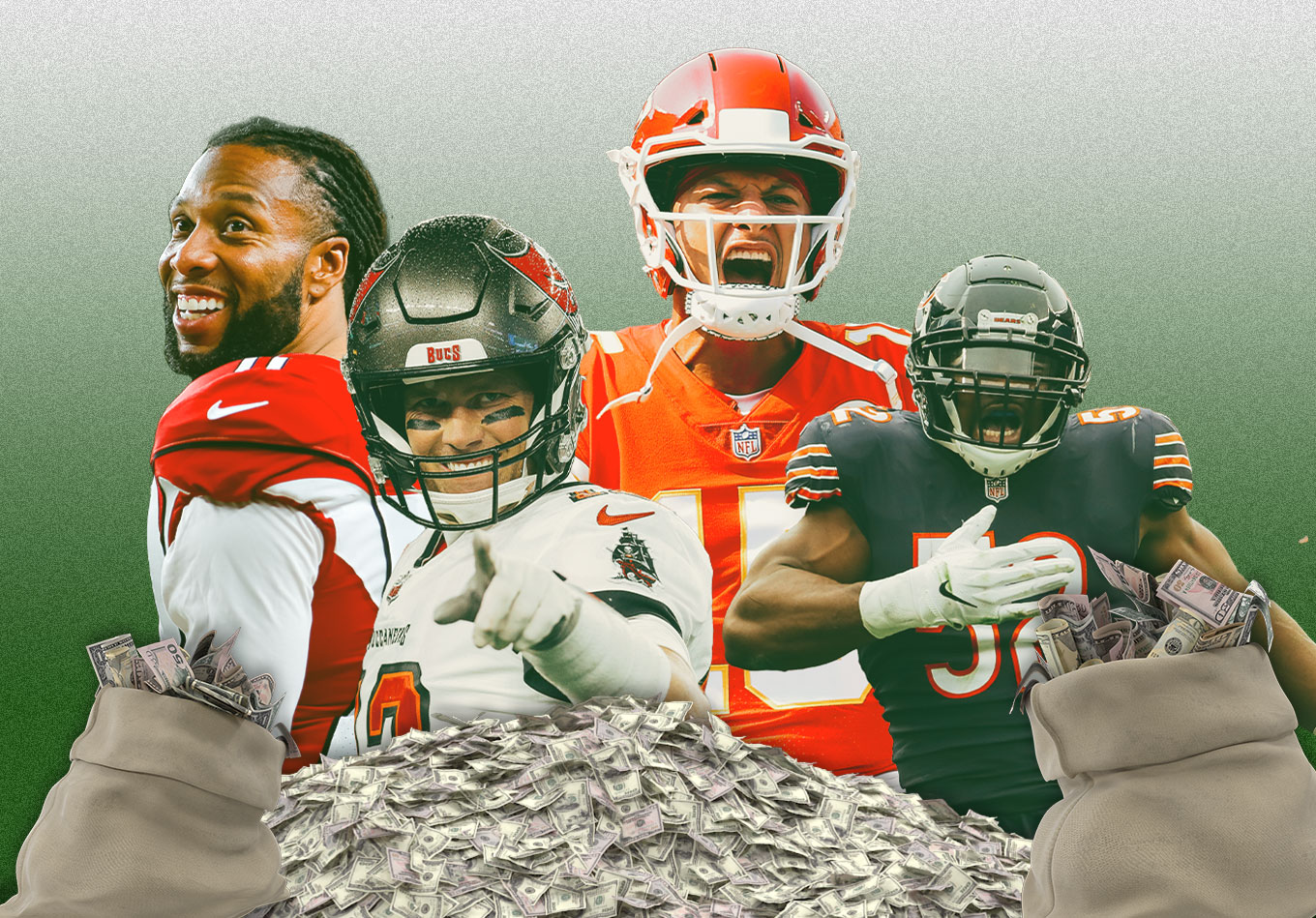 It pays to be a quarterback.

The NFL rewards players at its most prestigious position with fame, endorsements, and lots and lots of money.

It seems like a new quarterback contract with nine figures of guaranteed money is coming out each week. And, as the revenue for the league continues to increase, the numbers in these contracts are just going to keep getting higher.

And while most of the top contracts in history have come at the quarterback position, some players at other positions have done well for themselves too.

Below, we take a look at the top earners in NFL history. Money talks, and these guys have had a lot said to them over the years (all contract data via Spotrac).

Mahomes laps the field with the enormous 10-year pact he signed with the Chiefs prior to the 2020-21 season. It was the perfect confluence of events for Mahomes; he was the consensus best quarterback in the league at age 24 coming off a monster season that ended in a championship win. Mahomes earned so much in this deal, he was able to become a minority stakeholder in another team in town – the Kansas City Royals.

Allen didn’t quite get the Mahomes deal, but he came close in terms of average annual value. The Bills were met with some derision after taking Allen with the seventh overall pick in the 2018 NFL Draft, but the team had the last laugh as he developed into one of the best quarterbacks in the league.

The Broncos had been searching for a quarterback since Peyton Manning retired, and finally found their man in the Seattle Seahawks legend. After spending a lot of capital to acquire him, it was only a matter of time before the team paid him his money, and he agreed to a new deal a week before the 2022-23 season began.

There was a lot of debate about whether the Cardinals would commit to Kyler Murray, but the team ponied up to keep their franchise quarterback. Murray clearly cared about his standing on the highest paid players’ list, since he exceeded the contract below him by a mere $500,000.

Watson got a new deal from the Browns after the team acquired him from the Houston Texas prior to the 2022-23 season.

The Chicago Bears saw Mack as the difference maker for their team in 2018. They spent a lot of draft capital to get him, sending two first-rounders, a third-rounder and a sixth-rounder to the then-Oakland Raiders for Mack, a second-rounder and a conditional fifth-rounder.

The Bears invested a lot of real capital in Mack too, giving him the largest deal for a non-QB ever. And while Mack was the force on defense the Bears hoped for a couple of years, the offense was never good enough to compliment his unit, and the Bears traded Mack to the Chargers prior to the 2022-23 season.

The Raiders didn’t view the Mack trade as a cautionary tale of giving up assets to sign a non-quarterback to a lucrative deal, as the team sent first- and second-round picks to the Green Bay Packers for one of the top wide receivers in the game and signed him to a deal that pays him $28 million per year.

Left tackle is a premium position, and Williams is an elite player. It makes sense that the 49ers were willing to give him the most money ever for an offensive lineman, even if he did sign it at the age of 32.

When the Chargers acquired the previously mentioned Mack, they did it to pair him with the owner of the second-most lucrative deal for a pass rusher. Bosa earned his extension with elite production throughout his tenure with the Chargers, which started with a NFL Defensive Rookie of the Year Award after he was selected third overall in 2016.

Garrett was the first overall pick the year after Bosa went third, and his team was quite happy with his early production as well. The Browns were so thrilled with the defensive end that they gave him close to as much as Bosa got to be the face of their defense for a long time. In comparison, Aaron Donald’s new contract totals $95 million over three years, but it has a higher AAV of around $31.7 million.

Widely known as the GOAT, the Tampa Bay Buccaneers star is also the GOAT when it comes to career earnings. And this is even with the sense that he was underpaid at the end of his New England Patriots years.

Brees played for 20 seasons with the Chargers and New Orleans Saints and was elite for most of them. New Orleans continued to invest in its franchise quarterback through contact extensions, and he kept earning that money, leading the league in passing yards five times.

Roethlisberger comes in just shy of Brees, earning almost $270 million in his 18-year career with the Pittsburgh Steelers. He’s also earned the most money for a first-round pick ever.

Ryan spent the first 14 years of his career with the Atlanta Falcons, winning NFL MVP in 2016 and leading the team to a Super Bowl appearance in Super Bowl 51. The rebuilding Falcons finally said goodbye to their stalwart at quarterback when they shipped him to the Indianapolis Colts prior to the 2022-23 season.

It seemed like Green Bay was inclined to move on from Rodgers in 2020 when they selected Jordan Love in the first round, but Rodgers rewrote that script by winning his third and fourth MVPs in the two years that followed. Winning four MVPs and producing into your late 30s is a good way to end up on this list.

Fitzgerald is behind 11 quarterbacks on the earnings list, but he’s first among non-signal callers. He spent a lot of his career with suspect quarterback play for the Arizona Cardinals, but at least he was well-compensated for it.

The top-earning defensive player of all time may be a little surprising, but Suh made a lot of money on his rookie contract after being selected second overall in the 2010 draft. He continued to score big money in free agency afterward, playing for the Lions, Miami Dolphins, Rams and Buccaneers.

Timing is everything in free agency, and Peppers is proof of it. Because he became a free agent in the uncapped year in 2010 (a new salary cap agreement had not been reached, so there was no salary cap), the Bears awarded him a six-year, $84 million deal that accounts for over half of his career earnings.

It’s not a coincidence that the three names at the top of the non-quarterback earnings list are all top-three picks who produced right away. Miller is no different, being selected second overall in 2011 before winning NFL Defensive Rookie of the Year.

Jones was “only” selected sixth overall in 2011, when the Falcons moved five total picks – including two first-rounders – to move up and grab the talented wideout. He did not disappoint, leading the league in receiving yards per game in three of his 10 seasons with the Falcons.