Leveling Up: Projecting the Breakout Players of the 2022 NFL Season | The Analyst 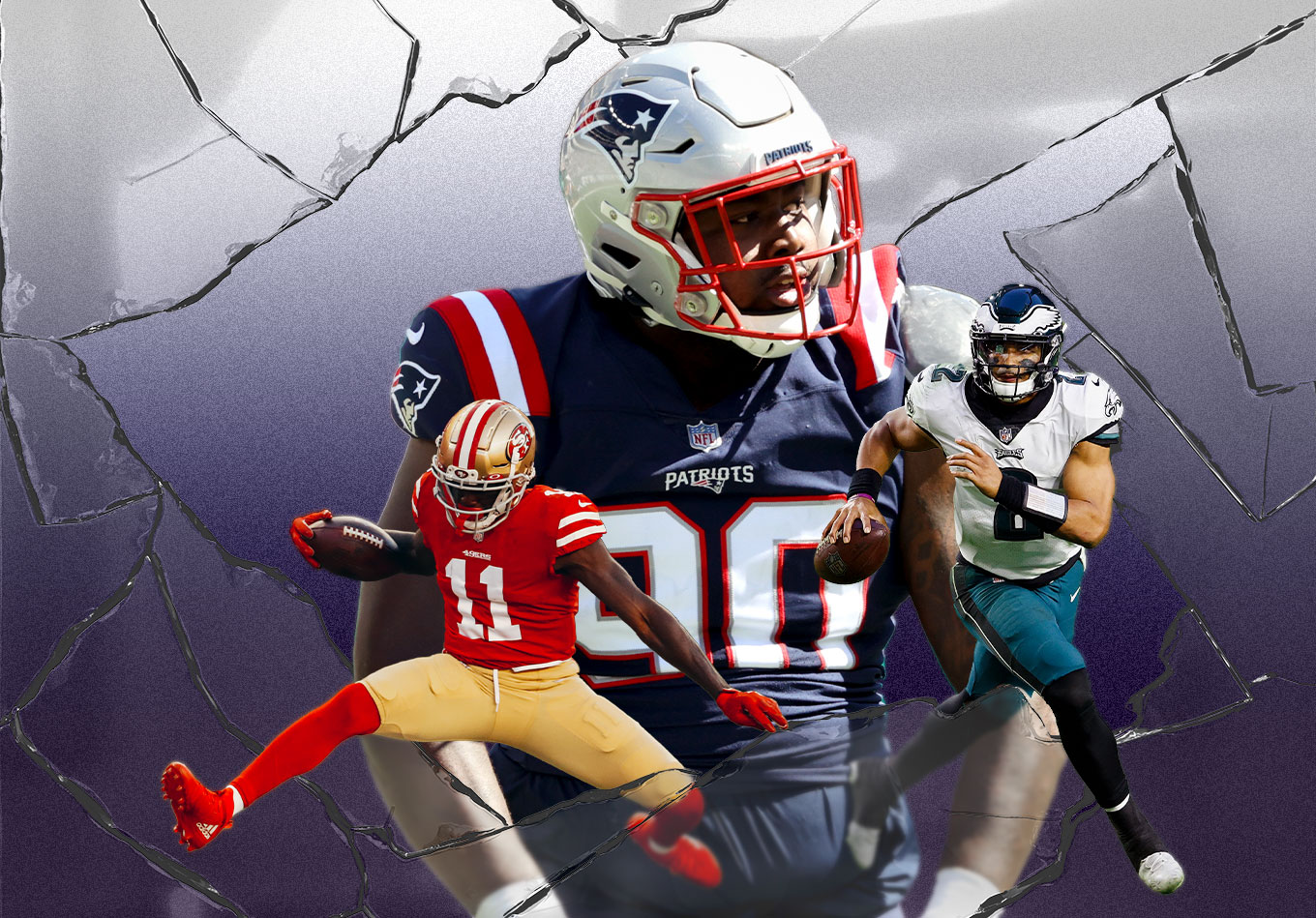 Forecasting which players will break out in a given NFL season is a difficult exercise.

New stars can come from anywhere. Highly drafted rookies can swiftly justify their selection, while others who have endured a less linear path to the highest level often emerge from the wilderness to become well-known names.

But, for those players who have already had the benefit of experience in the league, we can look at the data to judge who is in a spot to potentially make the jump to stardom.

Such ascents are regularly a product of situation. Here are three offensive players and three defenders who find themselves in spots conducive to a possible breakout year in 2022.

Hurts making the leap in his third season in the league is largely contingent on how his skill set is utilized by the Eagles.

Playing behind an excellent offensive line that ranked fifth in pass-block win rate last season and with a host of playmakers now including A.J. Brown, Hurts looks set up for success in 2022.

But for that success to be realized, the Eagles must tailor their offense to what he does well. In 2021, where Hurts clearly excelled was in the play-action game. Hurts ranked sixth in the NFL with a well-thrown ball on 80.4% of his play-action pass attempts, averaging 16.78 air yards on those throws.

Though they averaged 9.2 yards per play when they ran play-action, the Eagles did so on only 13.07% of their passing plays. By contrast, they ran straight dropback pass plays on 39.21% of snaps but averaged just 7.35 yards per play. Philadelphia went to the quick game on 21.57% of snaps with an average of 5.31 yards per play.

Having acquired Brown, who thrived playing in a heavy play-action offense with the Tennessee Titans, the Eagles must lean more into the play-action looks to give Hurts the best chance of improving on a quietly efficient 2022.

It would not be a seismic shift in their offensive approach, but with the talent level on their roster, it is one that could propel the Eagles to a deep playoff run and allow Hurts to end questions about his legitimacy as the long-term starter.

Drafted from the star-studded receiver class of 2020, Aiyuk has not produced at the same level of Justin Jefferson, CeeDee Lamb and Tee Higgins.

That is partly a product of the many mouths there are to feed in the San Francisco offense and partly a result of him falling out of favor with head coach Kyle Shanahan early last season.

However, Aiyuk worked his way back to being a focal point of the Niners offense down the stretch in 2021, producing a string of key plays during their surge into the postseason.

Aiyuk produced a big play on 40.8% of his 98 targets last season – fourth among wide receivers with at least 50 targets in 2021. Delivering a burn, which is when a receiver wins his matchup with a defender on a play where he is targeted, on 65.3% of his targets, his 16 receptions of 20 yards or more were tied for 12th in the NFL.

His numbers in that regard appear likely to improve as the 49ers transition from Jimmy Garoppolo to Trey Lance at quarterback. Only one quarterback with a minimum of 50 attempts last season – Drew Lock (10.20) – averaged more air yards per attempt than Lance (10.10). Garoppolo’s 7.38 per attempt was below the league average of 7.99.

Aiyuk is an excellent route runner who brings yards-after-the-catch upside and has already shown signs of building a rapport with Lance, catching four passes for 94 yards in the 2021 third overall pick’s second start against the Houston Texans.

If that rapport is furthered with a quarterback who should greatly improve the downfield threat posed by the San Francisco passing attack, 2022 could be the season in which Aiyuk establishes himself as another gem from a receiver class that has already emphatically lived up to its billing.

The Browns have been waiting for an Njoku breakout since drafting him in the first round in 2017, and they are seemingly banking on it coming in the near future.

Cleveland signed Njoku to a four-year, $56.75 million extension this offseason having initially placed the franchise tag on the former Miami Hurricanes tight end. Those moves were made despite Njoku having a career-high in receiving yards of 639, which was in 2018.

Njoku has struggled with injuries – never starting more than 14 games in a season, but there’s evidence to suggest this will be the year he puts it all together. Last season, Njoku had a mediocre burn rate of 57.7%, but Rob Gronkowski (12.87) and Dallas Goedert (12.39) were the only tight ends with at least 25 targets to average more burn yards per target.

The Browns offense has recently been built around the running ability of Nick Chubb and Kareem Hunt, but Deshaun Watson (if and when he is allowed to play) offers the passing game a significantly higher ceiling.

With the Browns’ wide receiver options beyond Cooper lacking in experience, Njoku stands to benefit greatly from that additional upside through an increased target share and the efficiency numbers from 2021 paint the picture of a player who will take advantage of his extra opportunities.

New England suffered a self-inflicted talent drain in the secondary, but the impact of the loss of J.C. Jackson and Co. may be minimized if it can get more from the defensive front.

The Patriots were seventh in pass-rush win rate last year, so it is fair to question how much more of a jump they can make in that regard. But Barmore is the one who may fuel such a leap.

New England’s second-round pick from 2021 had just 1.5 sacks last season. However, he ranked eighth among defensive tackles with at least 100 one-on-one pass rush matchups with a stunt-adjusted win rate of 38.34%.

He achieved a top-10 finish in that metric despite being double-team blocked 127 times. Only seven defenders were double teamed more often.

Converting those pass-rush wins into sacks will be the aim in 2022 and, if he continues to dominate his matchups in his second year and the Patriots get the consistency from edge rushers Matthew Judon and Josh Uche to reduce the number of double teams, Barmore’s production should see a significant improvement.

Off-ball linebackers might not move the needle like they once did, but Werner is set to step into a starting role alongside Demario Davis on a Saints defense that is still expected to be among the best in the NFL.

His burn yards per target allowed average of 8.08 yards was 18th for the players at his position to meet that threshold. Werner allowed a big play on 17.4% of his targets, also putting him comfortably on the right side of the ledger for that metric (the average was 19.8%).

On top of that, his run disruption rate of 12.1% was eighth for all linebackers with a minimum of 50 run defense snaps.

In a hugely encouraging rookie year, Werner proved he is ready to step up to the starting role.

Playing on a defense stacked with talent on the front and in the secondary, he’s in a situation to make a massive impact for a unit that may have to carry the load if the Saints are to return to the playoffs in 2022.

The Chiefs suffered an underrated loss in free agency as cornerback Charvarius Ward departed for San Francisco. Ward allowed a burn on just 39.8% of targets in 2021 – the fourth-best rate among corners with at least 50 targets.

His departure will likely see Fenton and L’Jarius Sneed start at corner this season, though the Chiefs did add Trent McDuffie to their secondary in the draft.

He gave up a big play on just 15.2% of targets – the third-best ratio in the league for the position. Fenton’s consistency in producing tight coverage should fuel optimism he can ensure Ward’s exit is not one that will cause the secondary to struggle.

Fenton has only two interceptions and 18 pass breakups to his name in three seasons. Another year of stingy coverage combined with more on-ball production for a Chiefs team likely to go deep into January again would raise the profile of an under-the-radar but very talented corner.