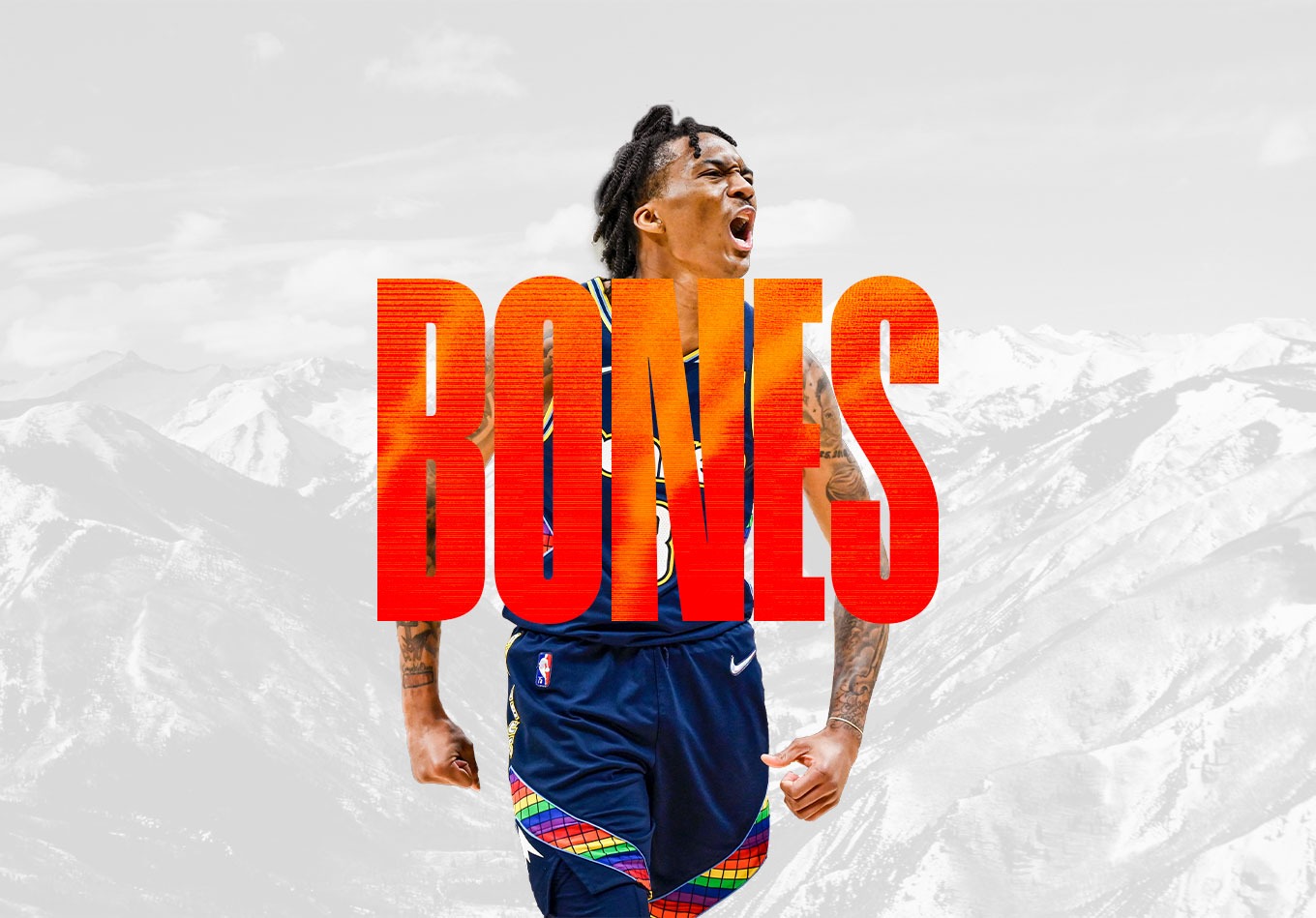 Between entering the playoffs down their second- and third-best players and facing the eventual NBA champions in the first round, this past postseason was none too kind to the Denver Nuggets.

One of their bright spots amid a gentleman’s sweep, however, occurred during Game 4, the only contest they won, and was authored by rookie guard Bones Hyland. From the 10:10 mark to the 9:05 mark of the second quarter, Hyland splashed home a trio of long balls that stretched Denver’s lead from 31-21 to 40-23. He teed up the third one well beyond the arc and after it submarined through the net, the electric joy that endears Hyland to so many emanated from him.

During his inaugural NBA campaign, Hyland asserted himself as a rotation guard and by midseason, had garnered lead ball-handling duties off the bench. He averaged 10.1 points, 2.8 assists and 2.7 rebounds on 55.8% True Shooting (.403/.366/.856 split) and received an All-Rookie Second Team nod.

Earlier this month, the Nuggets swapped Monte Morris and Will Barton for Kentavious Caldwell-Pope, signaling a confident investment in the dazzling 21-year-old’s immediate future. The primary motive was almost assuredly to upgrade their porous wing defense and the floor-spacing around Nikola Jokic. A tangential effect of bidding farewell to a pair of complementary ball-handlers is entrusting the second-year Hyland to play a critical role for a team touting title aspirations in 2022-23.

With Jamal Murray re-entering the fold, Hyland will maintain his reserve initiator status. The ball-handling brigade is much less crowded now, though. Gone are Morris, Barton, Facu Campazzo and Austin Rivers. Hyland and Murray hold the mantle in the backcourt. Aside from Nikola Jokic, virtually every other member of the projected rotation is an ancillary offensive talent and/or defensive-minded personnel.

The film and data from Hyland’s rookie season completely justifies the organization’s credence, too. In 23 games after the All-Star Break, he averaged 12.8 points and 4.3 assists on 63.8 percent true shooting (.465/.400/.833 split). Hyland brandishes a rare and immensely valuable intersection of advantage creation tools with alluring shooting and passing prowess. His handle, burst, flexibility and change of direction are paired with ball-screen savvy, crafty footwork and a buttery jumper.

He keenly recognizes how and when to leverage his shooting gravity, excels at enacting subtle openings with fakes, and interacts with open space exceptionally well. In ball-screens, his pacing belies his youthful label. He’s an adept interior passer, particularly on wraparounds, and can rifle dimes inside from a live dribble.

He ranked in the 78th percentile on shots off the dribble (0.978 points per possession), while his 49.3 effective field goal percentage on pull-ups paced all rookies (min. 125 attempts), per Synergy. His blend of space creation and confidence quickly rendered him an effective pull-up scorer through one season, and he subsidized that with downhill juice as a facilitator.

A critical development for Hyland to actualize the tantalizing scoring ceiling he previews is completing strides inside the arc. He shot 46.5% on twos (53.3% was league average) and often struggled to function through contact downhill. Fortunately, his handle, burst and flexibility enabled him to avoid contact altogether rather frequently. But his slender, 173-pound frame and underdeveloped core strength left him susceptible to being pushed off his driving routes.

From my vantage point, this bugaboo is exactly the sort of hurdle offseasons and further reps are designed to help alleviate. Hyland’s arsenal of burst, change of direction and slippery handle, as well as natural, presumptive strength gains, should prove fruitful enough to counter these occurrences in due time. Maybe they don’t happen consistently in 2022-23. Eventually, though, I’m confident he will overcome this current fault.

He also can be neutralized by mobile size and has a habit of dribbling himself into dubious spots in the paint. Refining the latter will be important with Denver instilling such faith in him, and he improved in this regard over the course of last year.

The creativity he wields over defenses sometimes devolves into a stale, particular approach that extinguishes his efforts. These three shortcomings are minor problems. Maturation in enduring physicality and growth as an interior scorer are the two foremost offensive developments for his game.

Regardless, the good news is Denver only needs Hyland to provide supplementary on-ball creation as long as Jokic triumphs on as its offensive nucleus and NBA’s premier offensive talent. Hyland showcased encouraging comfort and viability as an off-ball scorer last season, and the hope is he earns increased minutes alongside Jokic moving forward.

That duo only played 505 minutes together (about eight per game) and the Nuggets generated a plus-8.3 net rating during that time. Hyland is a perceptive cutter, a tremendous entry passer (his touch is impeccable) and a shrewd, reliable release valve shooter who flows well through dribble handoffs. Murray may be the platonic secondary star in a Jokic-led offense and, while Hyland is not of the same caliber, he’s of the same mold. His fit next to the MVP is delightful.

The Nuggets’ three best players, Jokic, Murray and Michael Porter Jr., are all homegrown pillars of the franchise’s title intentions. Although Hyland is not fourth-best at the moment, he’s going to vault up the rankings by season’s end and be yet another member of that pivotal homegrown cast. His decision-making and conviction as a creator expanded considerably during his rookie year.

Guards like him, ones with the duality to sufficiently operate on and off the ball, are not a commonality across the league. Hyland’s athleticism and skill profile merged for quite the alluring draft prospect. After one year, he looks primed to notably outplay that late first-round selection, already a fixture of both the short- and long-term success of this Nuggets ball club. At the very least, they certainly see it that way.