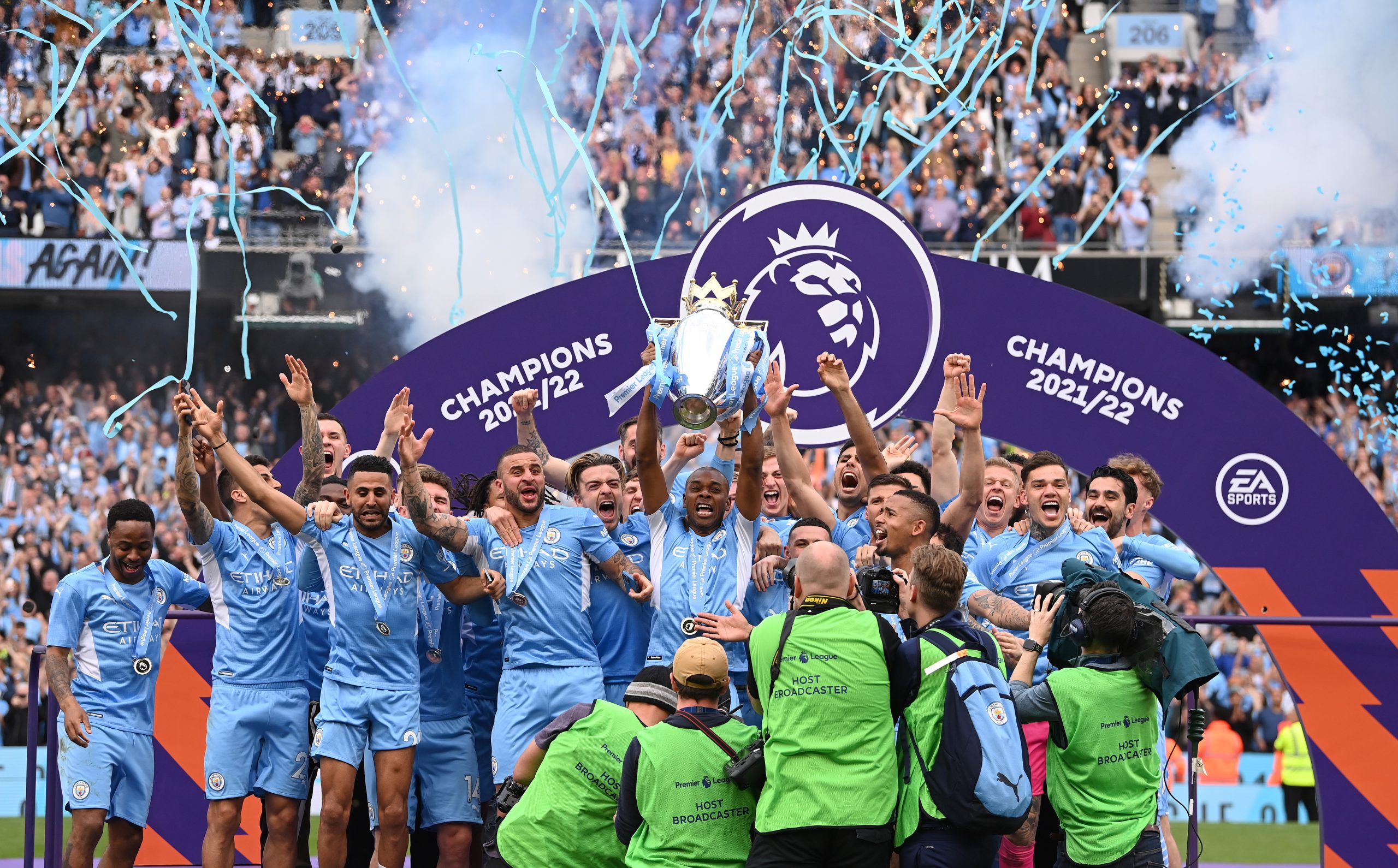 The 2021-22 Premier League season has ended, with a dramatic final day of action deciding not only the title, but the final Champions League qualification place and the last team to be relegated to the Championship for 2022-23.

You’ve no doubt seen the key facts from the campaign, but here we look back at some of the stats that might have slipped under the radar this season.

We Nearly Saw a Goal Record

In terms of total goals, the first-ever Premier League season in 1992-93 (1,222 goals) still leads the way and is unlikely to ever be beaten unless of an increase in teams within the competition.

Spurs Led the Premier League for Longer than Liverpool

Liverpool came close to winning the Premier League for the second time, but despite Manchester City losing to Aston Villa for 77 minutes on the final day, the Reds never once spent time at the top of the table during the final round of games.

All 13 of Spurs’ days top of the table also had rivals Arsenal sit bottom of the table – never before had an English league table ended a day like that before August 2021.

Overall, Man Utd conceded eight goals against the three relegated sides in the Premier League this season – only Everton conceded more often (11) across those encounters versus Watford, Norwich and Burnley. The Red Devils also won 11 of a possible 18 points in these games. Both Manchester City and Liverpool won maximum points (18/18) in these matches.

Southampton Squandered the Most Points from Leads

Southampton’s inability to hold on to a lead should be a worry ahead of 2022-23. They dropped a league-high 29 points from leading positions – a tally that only four teams have ever dropped more than in a single Premier League season.

This was even more than last season, when their tally of 23 points dropped from winning positions was only topped by Brighton & Hove Albion (25).

Across the last two seasons, Saints have dropped a huge 52 points from leading in games – 12 more than next-most Newcastle United (40).

Arsenal Had the Youngest Team in the Premier League

Yes, Arsenal did miss out on the top four and subsequently won’t play Champions League football for a sixth successive season in 2022-23. However, they achieved fifth place in the Premier League this campaign with the youngest side in the competition with their average starting XI age being just 24 years and 308 days old.

Only in 2008-09 (24y, 225d) have Arsenal had a younger average starting XI age in a Premier League season than in 2021-22. They finished one place higher that season (fourth), but the competition for top-four places certainly wasn’t as fierce as it is now, plus that Arsenal side only secured three points more (72) than the current crop (69).

Only Norwich City (9,487) handed more Premier League minutes to players aged 21 years old and younger this season than Arsenal (7,898), but the Gunners led the way for both goals (27) and assists (16) from players in this age range.

The two players to score the most in Premier League games this season while aged under 22 years old were Bakayo Saka (11) and Emile Smith Rowe (10), while Saka also led the assist total for players in this age range (seven) ahead of another Gunners’ star Gabriel Martinelli (six) and Spurs’ Dejan Kulusevski (six).

Bukayo Saka is the fifth player to play every league game in a season for the #Arsenal while under the age of 21:

The season ultimately ended in disappointment for Arsenal, but there’s much to be excited about at the Emirates’ Stadium.

Ultimately, it wasn’t a goal that kept them in the Premier League – Burnley’s failure to defeat Newcastle at home on the final day meant Leeds only needed to secure a point at Brentford – but Jack Harrison’s injury-time goal was the eighth that Leeds had scored in the 2021-22 top flight.

Overall, only champions Manchester City (nine) scored more goals in second-half injury time that Leeds across the season, but half (four) of Leeds’ tally ended as match-winners, including Harrison’s strike on the final day. Three of the other four goals scored in the 90th minute or later secured Leeds a point in matches, so without these eight goals, Leeds would have been 11 points worse off and probably be playing Championship football in 2022-23.

By leading Watford 1-0 at half-time of their final match of 2021-22, Chelsea broke a new Premier League record by becoming the first side in the history of the competition to not be losing a match at half-time within a season.

Of their 38 Premier League games, Chelsea found themselves ahead at half-time on 15 occasions and drawing in the other 23 matches. Despite this, Chelsea fans shouldn’t be thinking ‘what if games ended at half-time,’ as they would have actually been six points worse off than the standard ‘we play 90-minute games here, pal’ table and would still be the third-best team behind Liverpool and Manchester City.

Hats off for being hard to beat in the first half of matches this season, though.

Watford Might Just Have Been the Worst Home Team Ever

Watford were just minutes away from picking up a draw on the final day at Chelsea and sealing a 16th away point of the 2021-22 Premier League season – had they done so, it would have meant that they’d won twice as many points away from home (16) as they did at Vicarage Road (eight) this season. Alas, it wasn’t meant to be, and they just had to settle for 65% of their points tally coming on the road.

Were Watford the worst home team we’ve seen in any Premier League season? They’re certainly in for a shout.

The Hornets’ eight points won at home is only better than one team in Premier League history – Sunderland’s measly seven points at the Stadium of Light in 2005-06 (W1 D4 L14), while they equalled Derby County’s eight from their horrendous 2007-08 campaign.

Against Burnley in April, Watford became the first side in English top-flight history to lose 11 consecutive home games, while their overall tally of 15 home defeats in 2021-22 draws them level on the top-flight record in a season alongside Blackpool in 1966-67 and Stoke City in 1984-85.

Just for extra displeasure for Watford fans, their club decided to concede 46 goals at Vicarage Road this season – the most by any Premier League club in a season and the highest in a top-flight season at home since Chelsea (48) and Newcastle (49) in 1960-61.

2021-22 was a game of two halves for Newcastle United. Yes, we know why that was, but still Eddie Howe did a fantastic job in turning around their season and finishing 11th and just two points off the top half.

If Newcastle can perform like this across a whole Premier League season and secure 76 points, they would near certain be enough to secure a top-four finish and Champions League football.

Their financial might hasn’t even been flexed to its full capacity in the one transfer window since their takeover, so expect a challenge in 2022-23.

Spare a thought for Dwight McNeil. Not only was he part of a Burnley side that were relegated this season, but no player attempted as many shots as he did without scoring in 2021-22 (52).

That tally is the highest number of shots without scoring a goal in a Premier League season by a player since 2011-12, when Stewart Downing (72), Shaun Wright-Phillips (65) and John Arne Riise (52) failed to score despite a plethora of chances.

Luckily for you, we know have the handy expected goals metric, to tell you exactly how many goals he should have been scoring from his 52 shots this season – 2.94. If we’re being really unkind to the 22-year-old, those three goals might just have kept Burnley in the Premier League, had he converted them.

Still, this was absolutely nothing on Jay Jay Okocha in 2003-04. The Nigerian attempted a mind-boggling 137 shots without scoring a single goal for Bolton Wanderers that season – only Thierry Henry attempted more shots (191) in the competition, and he scored with 30 of those. Since our records began for this metric in 1996-97, this is the highest by a single player without a goal and is unlikely to ever be beaten.

No Outfield Players Played Every Minute

For only the third Premier League season ever, no outfield player managed to play every single minute of the campaign – the other seasons were in 2005-06 and 1997-98.

Some came close – Aston Villa’s Matty Cash was 40 minutes short (3,320) and Wolves’ captain Conor Coady played just 57 minutes shy of the total 3,420 (3,363), while goalkeepers Hugo Lloris and David de Gea were the only two players to play every single minute of the Premier League season.

At the other end of the spectrum, West Ham introduced young midfielder Daniel Chesters in a 1-0 defeat at Anfield to Liverpool on March 5. That appearance would be Chesters’ only Premier League appearance of the season – as well as his only career appearance in the competition to date – with just three minutes and 33 seconds on the pitch (including injury time) and without making a single touch of the ball. No player appeared for a shorter period of time than Chesters in 2021-22, while he was the only player to play and not have a single touch.