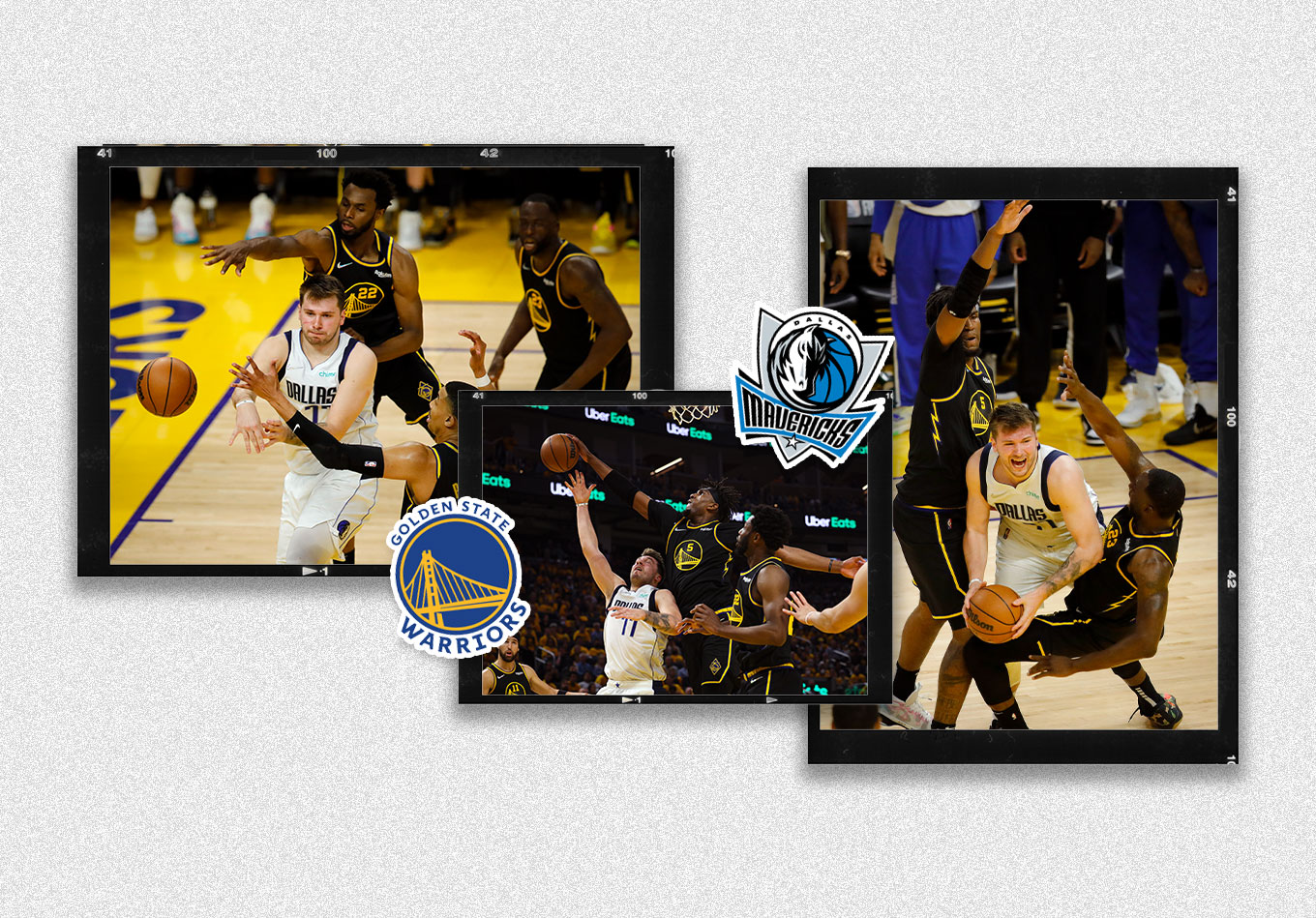 The Golden State Warriors just held Luka Dončić – one of the best playoff scorers in basketball – to the second-worst game score (7.1) and third-lowest point total (20) of his playoff career.

The immediate aftermath of this clash has plagued us with two overarching questions.

The dirty little secret that everyone seems to forget is that before Draymond Green went down on Jan. 9, he was the runaway favorite to win NBA Defensive Player of the Year (even with the injury, he ended up finishing second in our D-DRIP metric). And the Warriors were not only the best defense in the league, but a historically great defensive unit.

Through 39 games, the Warriors touted a 101.9 defensive rating, which was 7.3 points lower than the league average. Since 1955, only 10 teams have ever achieved a relative defensive rating that matches or surpasses that mark (Basketball Reference). Those teams include the likes of Bill Russell’s Boston Celtics, Tim Duncan’s San Antonio Spurs, and Patrick Ewing’s New York Knicks.

By the end of the season, the Warriors had finished No. 1 in our adjusted team defensive ratings, which uses defensive data to calculate how many points per 100 possessions better or worse a team was compared to the average club during that specific season.

The point being, the Warriors are an elite defense, and what they accomplished in Game 1 should come as no surprise.

One of the major differences between the playoffs and regular season is the depth of defensive coverages.

In the regular season, most teams use one general coverage that everyone on the team follows, with a few exceptions. For instance, the Miami Heat’s general scheme (during the regular season) was to switch everything one through five. However, when Dwayne Dedmon was on the floor, he would drop on ball screens because of his inability to tango on the perimeter.

In the playoffs, things get far more complex. Players receive specific principles they must follow based on who they’re guarding or the situation they find themselves in.

Let’s take a gander at what these principles were for the Warriors in Game 1.

Andrew Wiggins (Dončić’s primary defender) was instructed to force Dončić towards the help, and fight through screens and stay attached to him unless it was someone Golden State trusted to contain Dončić in a switch – like Green, Otto Porter Jr., or Klay Thompson.

Dončić finished 5 for 8 from the field against Wiggins, but that was far from the entire story. Wiggins used his combination of strength, length and athleticism to keep the defense “flat” (allowing the other four defenders to stay on their man) and avoid forcing the Warriors to commit any hard double teams to Dončić.

If Dallas tried to get Stephen Curry or Jordan Poole switched on Luka, the tandem was told to hedge the ball screen and recover back to their man (with hands up, of course).

Warriors writer Joe Viray pointed out (below) that Golden State’s hedges were most effective when they managed to high-tag the ball screens (show higher up). This subtlety afforded more time for Curry and Poole to recover and more time for the backline to rotate over.

Early on, the Warriors had him drop deep on ball screens to see if Wiggins could wiggle his way back onto Luka. These plays would often turn into a late switch (similar to what Dallas was doing with Maxi Kleber against Chris Paul), so later on Golden State decided to cut the middle man and just let Looney switch onto Dončić immediately.

The Mavericks came into this series hoping to attack Looney the way they did Deandre Ayton, but Looney made it clear in Game 1 that he was not going to let that happen. He stood his ground, forced Dončić towards the help, and used his bouldering force to avoid getting moved by the bulldozing Slovenian.

The on-ball execution was great, but the defense as a whole was absolutely phenomenal. They communicated well, executed timely digs/stunts, and made multiple efforts on each possession.

Overall, just an iconic performance from one of the best defenses we’ve ever seen.

Despite the suspense of the intro, the Warriors did not completely figure out Luka, and there’s still plenty for Dallas to be optimistic about as they prepare for Game 2.

We already mentioned that the Mavericks had more success targeting Curry and Poole when they set lower screens because they reduced the amount of time available for the Warriors defense to recover and react.

On top of that, Dallas had some great moments when it started actions with Dončić off the ball. One sequence that immediately comes to mind was this play in which the Mavericks used a dribble handoff followed by a double drag screen to put Wiggins through a whirlwind and manufacture an open Dončić 3-pointer. As a general rule of thumb, it’s way harder to scheme against players when they start actions off the ball.

Also, despite the Warriors taking away his scoring (a playoff-low 20 points on 6-of-18 shooting), Dončić still had an underrated playmaking outing. Coming into this series, Luka was averaging 13.5 potential assists (passes to a player who shoots within one dribble) through 10 games. In Game 1, he commandeered 15 potential assists. The problem was his teammates weren’t cashing in on these opportunities. According to NBA.com, the Mavericks shot a combined 5 of 18 (27.7%) off passes from Dončić.

That’s why Dončić is one of the best postseason performers in recent memory. His scoring and playmaking chakra is so balanced that it’s impossible to hone in on one without amplifying the other.

In Game 1, the Warriors did an incredible job of taking away one piece of the puzzle. Maybe their defense finds a way to take away the other in Game 2. Or maybe Dončić punches back, evens the series, and reminds everyone just how special he is.