The Battle of the Bridge: Relived in All Its Glory | The Analyst 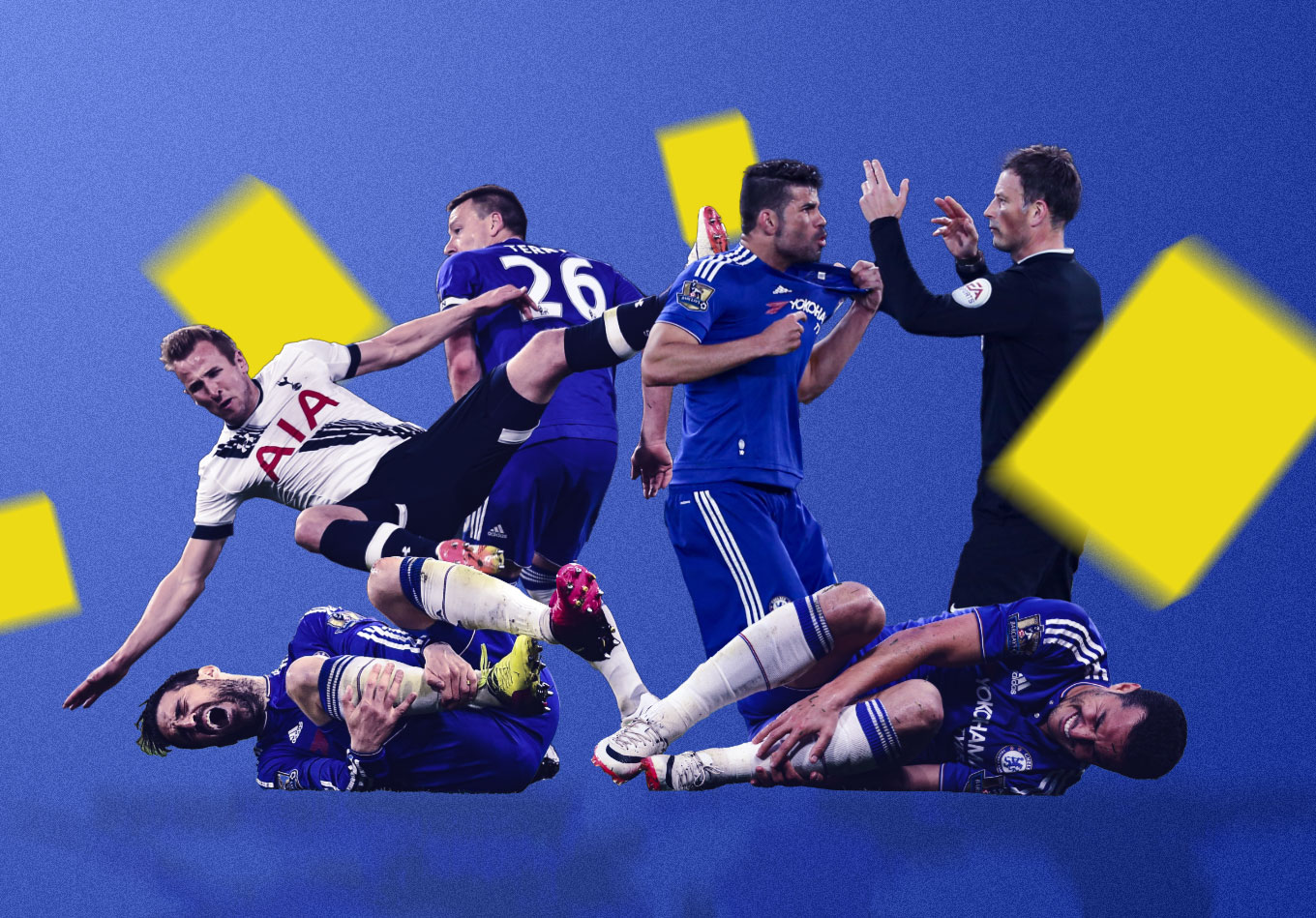 The Battle of the Bridge

this article was originally published in May 2021

Can a football match be considered a true classic if it doesn’t have its own Wikipedia page? Probably not, so it’s a minor shame that the May 2016 encounter between Chelsea and Tottenham gets only a paragraph on a bigger entry about the wider rivalry between these two clubs. Because make no mistake, this game has a strong claim for being one of, if not *the* greatest match in Premier League history. It had decisive impact on the overall season, it had excellent goals, and it had the sort of low-level air of menace found in an impromptu game between sworn enemies in a suburban pub car park. There are those, both at the time and subsequently, who would turn up their noses and moralise a game that descends into wild aggression, but what is football if not 150 years of grudge and mockery?

London is an odd football city in that it has six or seven large clubs but only two European Cup wins. It has mismatched rivalries too, with a sort of scalene triangulation of bristling intensity connecting Chelsea, Tottenham and West Ham. Chelsea started the Premier League era with half as many league titles as Spurs and right now have three times as many. That’s important, to them. As it would be to any of us. Accumulate the numbers, celebrate the wins.

Back in early 2016, Chelsea were only on five titles to Tottenham’s antique two, but the north London side had spent much of 2015-16 markedly improving under Mauricio Pochettino. And, in a season where most of the Premier League’s usual challengers had taken a gap year, it was down to Tottenham, seemingly, to prevent Leicester City winning their first title and closing the gap on Spurs to one. Leicester’s 1-0 win at White Hart Lane in early January was one of a series of statement wins, but Pochettino’s team then won six in a row.

As a leap year February ended and March began, Leicester were top of the pile with 56 points, Tottenham were two behind and Arsenal were three further back. Leicester under pressure, sure, but from a pair of clubs who had forgotten what it was like to win the league and forgotten how to win the league respectively. And the mutually assured destruction tendencies of London football was illustrated by Tottenham’s next two games. A 1-0 defeat to West Ham followed by a useful-for-no-one 2-2 draw with Arsenal.

Chelsea, meanwhile, were the defending champions, yet at the start of March were 11th having won the same number of games as West Brom. José Mourinho had led them to the title the previous season but for whatever reason, the club’s defence had been one of the most shambolic ever seen in England’s top flight. Mourinho was predictably yet summarily dispensed with in December, replaced with kindly Guus Hiddink and Chelsea’s role in the division was reduced to that rare thing, a very good team ambling through the remaining games landing punches if they truly thought it was worth it.

As Tottenham travelled to Stamford Bridge on Monday 2nd May, 2016, they were eight points behind Leicester. Claudio Ranieri’s team had two games to play, Tottenham had three. It was almost over but among other instructions, Pochettino must have pressed home the importance of not losing all chance of being champions at Chelsea. Not here. Not tonight.

The game contained the perfect ingredients for what was about to follow. A night game on a Bank Holiday, wounded champions at home to a team laughably (in their eyes) trying to take their crown, line-ups containing the likes of Cesc Fàbregas, John Terry, Diego Costa, Eric Dier and Erik Lamela. Also Tottenham, and remember this is May 2016, had not won a game at Stamford Bridge in any competition since February 1990. The starting line-ups that day contained the likes of Kevin McAllister (not that one), Dave Beasant, Paul Gascoigne and Gary Lineker. A different time.

The game by the numbers are these: Tottenham were two nil up at half-time. Harry Kane scored his 14th goal in the last 13 London derbies he had played in. Christian Eriksen supplied his 13th assist of the campaign. At the time only Darren Anderton in 1994-95 had assisted more goals for Spurs in a single Premier League season. The following season Eriksen would go on to beat both Anderton and himself, but 2016-17 held its own psychic pain, as we’ll find out below. Harry Kane went on to assist 14 Premier League goals last season, but the presence of Eriksen three times in the top five certainly goes some way to explain the frustrated ennui he showed in Amazon’s All or Nothing in 2020.

In May 2016 expected goals existed but, in a reversal of contemporary football, it was consumed behind closed doors while fans could were permitted to attend games. Tottenham, having committed the cardinal sin of throwing away a two-goal lead, can at least point to winning the xG contest by 1.0, but Eden Hazard’s equaliser in the 83rd minute felt as deserved as it was predictable. Spursy, typical, inevitable.

The game by the vibe, was very different. The former Premier League referee Mark Clattenburg has since confessed that his decision not to show a single red card in a match that may have deserved at least two or three was premediated.

Speaking to NBC in 2017, Clattenburg admitted, “It should have been three red cards to Tottenham. I allowed them to self-destruct so all the media, all the people in the world went: ‘Tottenham lost the title.’ If I sent three players off from Tottenham, what are the headlines? ‘Clattenburg cost Tottenham the title.’ It was pure theatre that Tottenham self-destructed against Chelsea and Leicester won the title.”

That’s all well and good, but you can’t help feel that this approach only sped up the introduction of VAR. This was common sense in a world that wanted consistency, before the footballing world pivoted to consistency ahead of common sense. Clattenburg’s timeline meddling meant that he had to keep handing out yellow cards at an extraordinary rate. By the time he blew the final whistle – which by no means ended the game’s aggression – nine Tottenham players had been booked. It was, and it remains, a Premier League record.

Whether Clattenberg was right or not to artistically legitimise Leicester’s title by keeping 11 Tottenham players on the pitch, we shouldn’t let this moment pass without paying tribute to the sheer destructive physicality that both teams, but mainly Spurs once the game was slipping away, showed. In roughly chronological order, we had Danny Rose fouling Willian, then Kyle Walker cleaning out Pedro. Lamela and Jan Vertonghen then teamed up on Diego Costa, then Rose went in on Willian which led to the type of brawl where Pochettino ends up on the pitch and ends with Mousa Dembélé trying to gouge Diego Costa’s left eye out. The Tottenham player was handed a six-game ban which I don’t think anyone, including Mark Clattenberg, claimed devalued Leicester’s Premier League win.

Into the second half and Eden Hazard was targeted, with Eriksen clattering into the Belgian, before he suffered retribution at the hands of Branislav Ivanovic shortly afterwards. Lamela was everywhere, Walker snots into his hand at one point and flings it towards Costa, Lamela again, standing innocently* (*not innocently) on Fàbregas’ hand. Even Kane gets involved, fouling Willian, then Dier isn’t sent off for nearly cutting Hazard in two like the world’s slowest missile. Ryan Mason, currently the actual manager of both Kane and Lamela, also gets involved on Hazard late on. It’s all there. It’s all happening. Watching it now, your emotions are: 1.) Listen to the fans 2.) look how happy everyone seems and 3.) there’s no VAR.

It was the first time since 1987-88 and 1988-89 that the league title had been decided at the same ground for two seasons in a row. Hazard’s equaliser meant he had scored at Stamford Bridge in the Premier League for the first time in exactly 365 days, and both goals had been pivotal. Against Crystal Palace in 2015 for Chelsea. Against Tottenham in 2016 for Leicester. And Chelsea. In fact very much for Chelsea. It cannot satisfactorily be proven, but by spending many of the closing stages trying to waste time by holding the ball in the corner, Chelsea may be the only reigning champions of England to have actively willed on their own deposition. Behaviour that won’t get you into a Super League but is incredibly indicative of a super league.