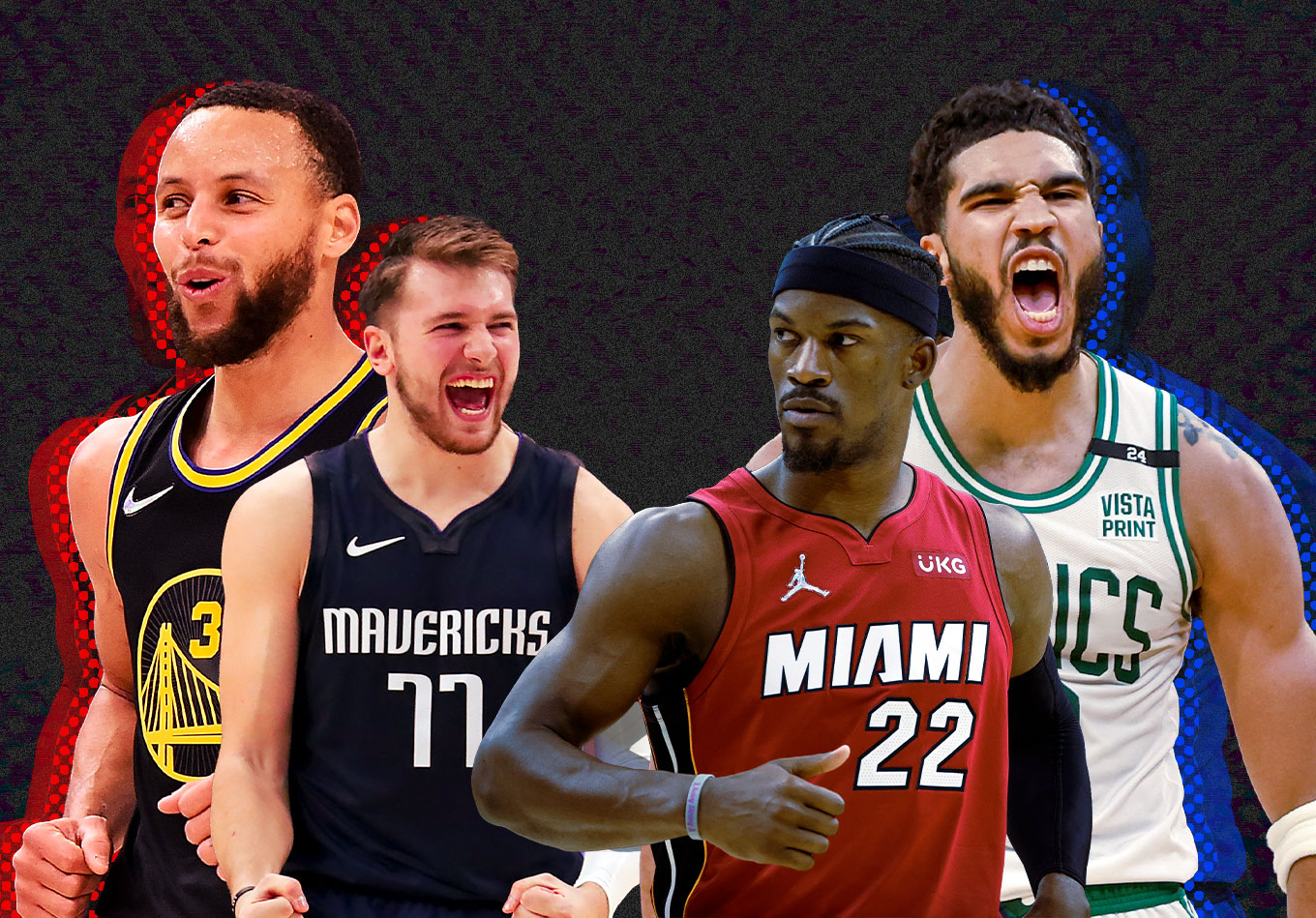 NBA Playoffs: What to Watch for as Four Teams Vie for a Trip to the Finals

With the conference finals set to tip off tonight, the stakes have never been higher for analysis purposes as we try to ascertain which teams will duel it out in the final stage of the 2022 NBA Playoffs.

So we’ve run a model that uses our adjusted team ratings and other data to determine which clubs are most likely to fight for the Larry O’Brien Trophy. Adjusted team ratings only look at what we’ve already seen, though it weights recent performance heavily in determining win probability.

You’ll also notice when we reveal the win probabilities below that the gap between the Boston Celtics and Miami Heat is far narrower than the one between the Golden State Warriors and Dallas Mavericks. That’s because home-field advantage gives the Heat and Warriors a boost in our algorithm.

Still, after just having watched the last year’s Finals opponents get knocked out of the dance prematurely, we know the fate of this round is far from predetermined.

Here are two things to watch for each of the four remaining teams – one from an optimistic lens and one from a pessimistic lens – along with those series win probabilities:

Boston Through an Optimistic Lens: If you asked 100 people who the top-five players in the world were heading into the playoffs, both Giannis Antetokounmpo and Kevin Durant would likely be mainstays on most ballots.

This postseason, the two elite forwards have experienced a significant dropoff in scoring volume and efficiency at the hands of the Celtics’ squad of superstar stoppers (alliteration is fun).

The unit’s next challenge lies in the form of one Jimmy Butler, who – to his credit – has a legitimate case as the postseason’s best player up to this point. He has the third-best DRIP among remaining players, and he’s gone bonkers through two rounds, averaging 28.7 points on 61.8% true shooting.

Slowing him down will be tough, but if anyone can do it, it’s these Celtics.

Boston Through a Pessimistic Lens: While much has been made of Jayson Tatum’s Game 6 heroics against the defending champion Milwaukee Bucks, he’s not yet the isolationist that many of the greats he’s compared to were during their heydays.

This postseason, he’s averaging a mere 0.89 points per possession (43rd percentile). That’s troublesome because the Heat’s propensity for switching 1-5 could serve to muck up the Celtics’ offense in a way the Bucks (primarily a drop coverage team) could not afford to because of their personnel (sorry, not sorry, Grayson).

Miami Through an Optimistic Lens: You may recall that these two teams did battle in the conference finals not too long ago. And when their paths crossed in 2020, the series concluded with a Heat victory and a coronation of Bam Adebayo’s ascendency into stardom.

Earlier, we briefly alluded to his value on the defensive end (he finished ninth in defensive DRIP during the regular season) and he’s probably the best switch big in basketball. Plus, he authored this game-saving rejection on Tatum once before.

But he’s also a high-level offensive contributor. The last time these two teams met, he touted 21.8 points and 5.2 assists on a team-high 66.3% true shooting.

Adebayo’s blend of size and strength is something the Celtics have yet to see in these playoffs (he’s even denser than Antetokounmpo). And it’ll be interesting to see how much their interior resistance has grown in the last two years.

Miami Through a Pessimistic Lens: The Heat’s fatal flaw comes in the form of their uneven half-court offense.

The culprit for their inconsistency has been their lack of a table-setter who can continuously burn defenses with off-the-dribble 3-pointers. Having that kind of threat forces defenses to respect the ball handler, and this increased focus can lead to 4-on-3 situations.

Here’s an example from Game 6 against the Philadelphia 76ers:

They have that guy sometimes, but no one can bend the defense like that consistently.

Butler is incredible, but defenders will go under screens against him and dare him to shoot (23.3% 3-point shooter) over conceding an advantage. Lowry has looked like a wounded lion for most of these playoffs and is out for Game 1. Herro can get buckets with the best of them, but he struggles to facilitate when faced with increased pressure.

And while Max Strus played the part honorably in Game 6, relying on him as your primary drink stirrer at this stage of the game is a good way to get booed off.

Golden State Through an Optimistic Lens: When the Warriors’ offense is humming, not a single team left on the field has the firepower to go blow for blow with them in a shootout.

You may have heard that the Warriors’ fabled death lineup has come out with a new iteration. The Splash Trio (Stephen Curry, Klay Thompson and Jordan Poole), along with Draymond Green and Andrew Wiggins, has put up 180 points on 50.8% shooting from the floor in 69 playoff minutes together (a rate of 125.2 points per 48).

In this 11-game span, the quintet had a stretch in which it put up 70 points in 19 minutes during Game 2 of the first round and had a hand in the second-highest true-shooting performance (76.1%) in the postseason since 2015 against the Memphis Grizzlies in Game 3.

Golden State Through a Pessimistic Lens: Notice how we said when the Warriors’ offense is humming. One of the main reasons the Warriors became such a smash hit among fans during their rise in the mid-2010s was the aesthetically pleasing nature of their free-flowing, perpetual motion offense.

However, this anti-structure approach does come with some pretty damaging drawbacks. At its worst, Golden State’s offense looks more wildly reckless than radically creative. Examples that stick out are Curry’s errant behind-the-back pass to no one in Game 7 of the NBA Finals or their recent dud in Game 5 against the Ja Morant-less Grizzlies.

This issue has plagued this unit for the duration of their dynasty. With the exception of their 15-50 year in 2019-20, the Warriors have finished in the bottom 10 in turnovers per game every season since 2015-16.

Doncic’s supreme blend of scoring and playmaking makes him the Platonic Ideal of postseason scorers. Defend him in a drop, and he’ll burn you with his feathery touch in the midrange (career 44.5% shooter). Blitz him with two defenders, and he’ll pinpoint the blindspot faster than even the staunchest of defenses can scramble back to recover.

And if you try to switch against him, he’s either too strong or too skilled for you to hinder his path towards the rim (67.6% this season). Even his pull-up 3-point shooting has progressed to a level (35.8%) in which going under on screens is no longer a viable last resort.

This amalgamation of abilities has morphed him into one of the greatest postseason performers ever. Just look at how he holds up next to some modern-day all-timers (albeit in a smaller sample size):

Career Changes in Scoring/Efficiency From Regular Season to Postseason

As you can see, he’s the only player in this group who experiences an increase in scoring volume and efficiency from the regular season to the playoffs.

Dallas Through a Pessimistic Lens: One of the major keys to Dallas’ success against the Phoenix Suns was the team’s ability to pressure Devin Booker and Chris Paul by blitzing them with two defenders. This worked because of Dallas’ ability to rotate and split the difference until the second defender recovered back to his man.

This enabled the Mavs to force a ton of turnovers (17 per game in Dallas’ wins), which, in turn, served to bolster their early clock offense.

The problem is that the Warriors’ lead ball handlers, Curry and Poole, are not only accustomed to such conditions, but they thrive in these situations.

As we mentioned against Memphis, the tandem is adept at hitting the slipping roller in these instances, which puts the roller in an advantageous 4-on-3 scenario. And no offense to Deandre Ayton, but he isn’t nearly as potent a short roll passer as the venerable Green.

Dallas’ rotations and communication will need to be even more crisp than before if it wants to avoid wide-scale exploitation at the hands of Golden State.