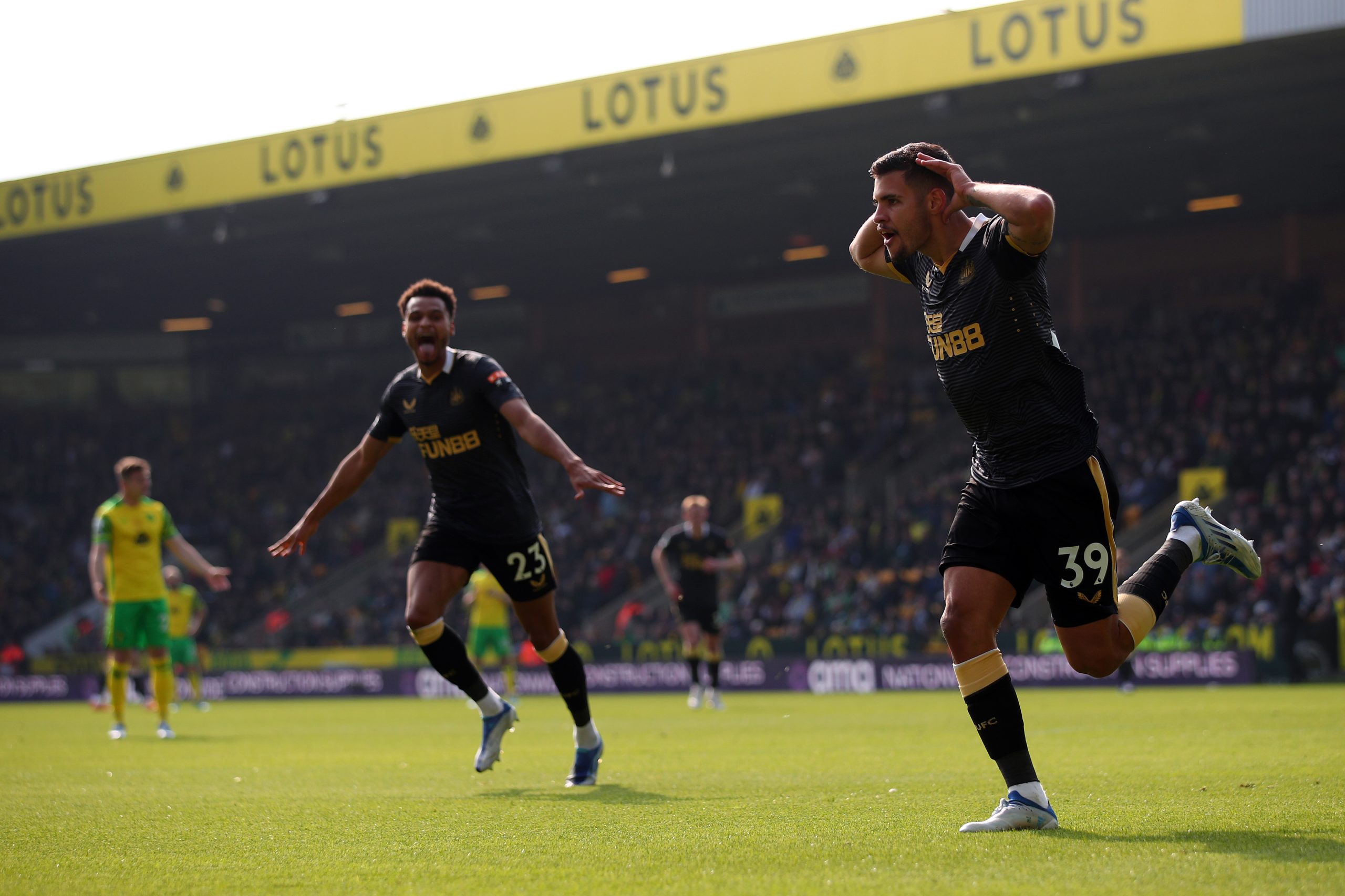 Why Newcastle Could Be Kingmakers Against Liverpool or City

Few would be surprised if Manchester City and Liverpool, the Premier League’s two dominant teams, each won their five remaining matches this season.

Liverpool have 12 victories in their last 13 games, with their sole aberration a 2-2 draw against City.

Yet that run will not be enough to take the title should City themselves continue to win, maintaining the tiny one-point gap that represents a chasm in this rivalry.

Perhaps the distraction of huge Champions League tasks could instead encourage one side or the other to take their eyes off the prize – or maybe a Premier League rival can provide an upset.

Liverpool must still tackle two of the other three opponents to have taken points off City this term (Tottenham and Southampton) but first face a team transformed since they were swatted aside by both the Reds and the champions back in December.

As back then, Newcastle United take on Liverpool and City in consecutive matches. The top two also each have Wolves and Aston Villa to play, yet it is Eddie Howe’s men who look primed to be kingmakers.

So, heading into a daunting double-header comfortably in midtable after 150 days in the relegation zone this season, could Newcastle shake things up?

The last time Newcastle beat Liverpool, Georginio Wijnaldum scored one goal and created the other. He has since been relegated with Newcastle, joined Liverpool, won the Champions League and the Premier League and moved on again.

The Reds are 10 without defeat against Newcastle, including a four-match unbeaten run on Tyneside – albeit with two of those clashes behind closed doors. Newcastle have failed to win in five successive home league games against Liverpool only once previously, back in the 1960s.

Liverpool did come out on top the last time they played in front of fans at St James’ Park in 2019 but only courtesy of a controversial late winner. The hosts were clear of relegation trouble with little to play for after a strong second half to the season, while the visitors briefly set aside a Champions League semi-final in their pursuit of City.

That sounds familiar, and the home crowd are likely to be up for it again, with Jürgen Klopp remarking last time: “Is there any history between Newcastle and Liverpool that I don’t know about? The atmosphere was like something happened in the past.”

Howe’s side have their own streak to extend this weekend, meanwhile, having won six Premier League games in a row at home for the first time in 18 years.

In fact, only three times previously in the competition have Newcastle enjoyed a longer such stretch at home, even if their 1995-96 record run of 14 wins remains a long way out of reach.

City at least have the benefit of playing Newcastle at the Etihad Stadium, although the Magpies’ four away wins this season have all come since the turn of the year.

For the first time since 1996-97, Newcastle have won three games in a row on three separate occasions, including an ongoing run of four straight victories in which they have conceded only once…

Built From the Back

Newcastle’s development into a solid defensive outfit was far from expected. They ended 2021 having conceded a record 80 Premier League goals for the calendar year, while Howe’s Bournemouth team shipped at least 61 in each of their five seasons in the competition.

A 3-3 draw at home to Brentford in his first match in charge hinted at the continuation of a campaign of chaos, and Newcastle were still conceding 2.3 goals per game – on course for more than 86 for the season – when City won 4-0 at St James’ Park in December.

However, Howe – widely considered an attacking coach – spent time at Atlético Madrid in his spell out of the game, and Newcastle have since represented something akin to Diego Simeone’s side.

They have conceded more than once in only a single game since the City defeat, an uncharacteristic 5-1 collapse at Tottenham that included four home goals in just over 20 minutes either side of half-time.

Again, only Liverpool’s Alisson (10) and City’s Ederson (seven) can top Martin Dubravka’s six league clean sheets for Newcastle in 2022, while he has let in 13 goals in 15 games – or a hugely impressive eight in 14 outside that Tottenham game.

Dubravka has played a key role in keeping Newcastle up in previous seasons, but this time the players in front of him are doing the bulk of the work.

Newcastle have allowed their 2022 opponents chances worth 1.0 expected goals per game, third behind City (0.62) and Liverpool (0.93). Their defence is sixth in terms of shots faced over this period (10.8 per game) and fourth for shots on target faced (3.1 per game).

The Magpies will back themselves to frustrate either Liverpool or City, yet the top two have won 10 of the 17 games this season in which they have scored no more than a single goal, so Howe’s men will have to threaten at the other end, too.

Outsiders have attributed much of Newcastle’s upturn to their January investment in new players, yet that ignores the improvement of previously failing individuals like Joelinton and Emil Krafth – key men in a side missing England internationals Callum Wilson since December and Kieran Trippier since February.

Howe is therefore yet to come close to naming his strongest Newcastle team, but that XI will undoubtedly have his most expensive signing, Bruno Guimarães, at the heart of it.

With Trippier likely still out, Guimarães is perhaps the one Newcastle player who would not look out of place in either the Liverpool or City line-ups.

The Brazil midfielder has been as outstanding as expected both in and out of possession, showing the quality that helped Lyon to knock City out of the 2019-20 Champions League.

Guimaraes has completed 85.8% of his passes in the Premier League, the highest rate of any Newcastle player to play 500 or more minutes since their promotion in 2017, while also averaging a tackle every 24 minutes – third behind Arthur Masuaku and Liverpool’s Naby Keita this season.

What was not anticipated was the goal threat Guimaraes has also brought. After scoring three times in 56 Ligue 1 games with Lyon, the 24-year-old has four in 13 – including just seven starts – at Newcastle.

Since first breaking into the Newcastle XI, only Cristiano Ronaldo (eight), Son Heung-min (six) and Gabriel Jesus (five) have found the net on as many occasions in the Premier League.

“Goals aren’t the strongest part of my game,” Guimaraes insisted when he arrived in England, but he poses as big a danger to Liverpool and City as anyone, looking to extend his streak of goal involvements in three straight matches.

Guimaraes spoke in that same interview of winning the Champions League during his time at Newcastle, while his agent this week suggested the club would be targeting qualification as soon as next season.

These next two fixtures present Guimarães and Newcastle with the opportunity to test themselves against the best Europe can offer – and potentially decide the Premier League title race in the process.