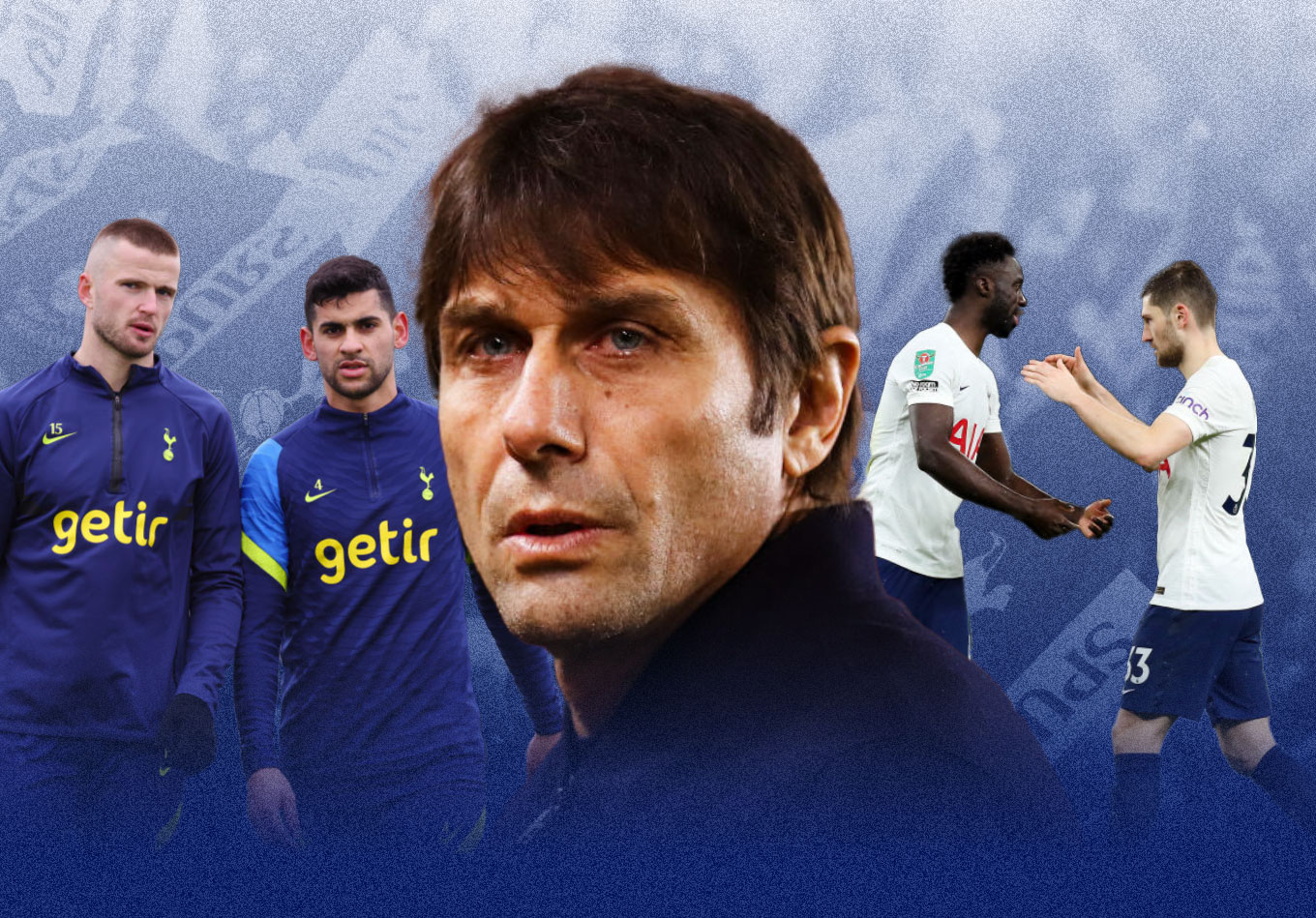 Tottenham Hotspur have conceded 36 goals in 29 Premier League games this season, at an average of 1.24 goals per game (slightly up from 1.18 last season). Only the top four and Wolves have a better defensive record this term, while Brighton’s is identical to Spurs’. It looks better for Antonio Conte when you break his team’s record down – they conceded 1.6 goals per game under Nuno Espirito Santo in the first 10 matches of the 2021-22 season, compared to just 1.05 since Conte’s arrival on 2nd November.

On the face of it, Tottenham have improved defensively since the managerial change, but does that still ring true when you dive into the numbers?

It is important to first note the inconsistency of Tottenham’s defensive selections this season. Spurs have selected nine different centre-back combinations in the league this season – the fifth highest in the Premier League.

This does not include September’s 3-0 defeat at Selhurst Park where Joe Rodon came off the bench to play 78 minutes after an early injury to Eric Dier. There are multiple factors behind these changing selections, most notably the injury Cristian Romero suffered on international duty just two weeks after Conte was appointed.

Their most common centre-back setup of Eric Dier, Cristian Romero and Ben Davies has started each of the last seven Premier League games, with their only other outing coming in Conte’s first league game as Tottenham manager when they kept their first clean sheet in eight league games. It is a trio that may not be what Spurs need in terms of quality, but undoubtedly fits what Conte needs stylistically – two wide centre-backs who are comfortable on the ball and capable of stepping out of defence with or without possession, and a strong, aerially dominant centre-back who can command the defensive line.

All three of these defenders rank in the top 10 for carry distance per 90 in Premier League centre-backs who have played over 1000 minutes this season. For a team that struggled with ball progression all over the pitch in the preliminary stages of the season, this trust and confidence that Conte has instilled in his central defenders has been crucial in his team keeping themselves in the race for Champions League football next season. Not too many Tottenham fans will deny that this is an area of the pitch that needs to be strengthened in the summer, but the Italian manager is doing an incredible job with the assets he has at his disposal.

The transformation within these defenders’ ball-playing ability since the departure of the former Wolves manager at the end of October is clear to see. Dier and Davinson Sanchez have both seen their progressive ball carrying distance per 90 more than double, with Romero’s increasing by 89%. The three starting centre-backs are in the Premier League top 12 for this statistic.

Despite being signed during Nuno Espirito Santo’s reign, Cristian Romero has proven himself an invaluable asset for Conte. While it may surprise some fans to hear that the North London side concede slightly more goals with Romero on the pitch, the Spurs faithful have quickly fallen in love with the Argentinean’s tenacious and determined manner, and his willingness to progress high up the pitch in possession. I was caught by surprise when Romero played seemingly as a right-winger at times on his first start away to Pacos Ferreira in August, but it is a part of his game that has only become more prevalent as he grows more into the side.

This aspect of Romero’s game has been very evident in his last three Premier League appearances against West Ham, Brighton and Manchester United. A sizeable percentage of his touches come in the opposition’s half, where he has developed a strong ability to feed the ball forward to Matt Doherty, Dejan Kulusevski and Rodrigo Bentancur. The Atalanta loanee even managed to bag his first goal for the English club, as he found himself in the Brighton box to deflect a tame Dejan Kulusevski effort into the bottom corner.

Of course, this clearly doesn’t settle the debate in any way – both defenders stand out over each other in various aspects of the game, but it is a slightly difficult comparison to make as White has played over 1,000 minutes more than the Argentinean this season and has prior Premier League experience. Both have very similar success rates in duels (White: 59%, Romero: 61%) and in aerial duels (White: 60%, Romero: 56%), but Romero is seemingly more crucial to Spurs’ build-up than White, seeing more of the ball – he makes 10 more touches per 90 minutes than White (78 vs. 67) and completes nine more passes per 90 on average (56 vs. 47).

On the opposite side of the defensive trio, Antonio Conte has used Ben Davies to occupy a similar role on the left. Davies has plenty of experience as a left-back in this Tottenham side and has competently adapted to a more reserved position in the team in recent years. It helps that he often plays there for Wales, alongside his Spurs teammate Joe Rodon. In his Scudetto-winning Inter Milan team last season, Conte used Alessandro Bastoni and former Spurs target Milan Skriniar in the same roles. It is a key tactic within a Conte system, it is proven to be effective, and Daniel Levy should be looking to strengthen the LCB option this summer so Conte can progress this team even more if he remains in charge next season.

Ben Davies and Cristian Romero’s willingness to step out of defence has also proved crucial to Tottenham out of possession. The two players rank in the Premier League top five for pressures per 90 and pressures on players in possession per 90. That is not to say either of these players are flawless when advancing to press an opposition player. Davies’ added experience has potentially allowed him to adapt to this new style with more calculated moves, but Romero has been rash at times. At just 23 years of age, there is plenty of time for the former Juventus man to perfect his trade before his current contract runs out at Spurs in 2027.

It is easy to focus solely on the fact that Spurs are conceding fewer goals with Antonio Conte in charge but while the Italian will be happy to point that out, he has added so much more to this Spurs defence. They are progressive in possession, proactive out of possession, and stabilising this side to provide a platform for a top four push.

The fixture list is not easy for Spurs though. Next up, they welcome in-form Newcastle United to the Tottenham Hotspur Stadium. The Magpies hit a bump in the road with two defeats before the international break, but they had picked up 19 points out of the previous 21 available and will look to continue increasing the distance between themselves and the dreaded drop zone starting on Sunday.