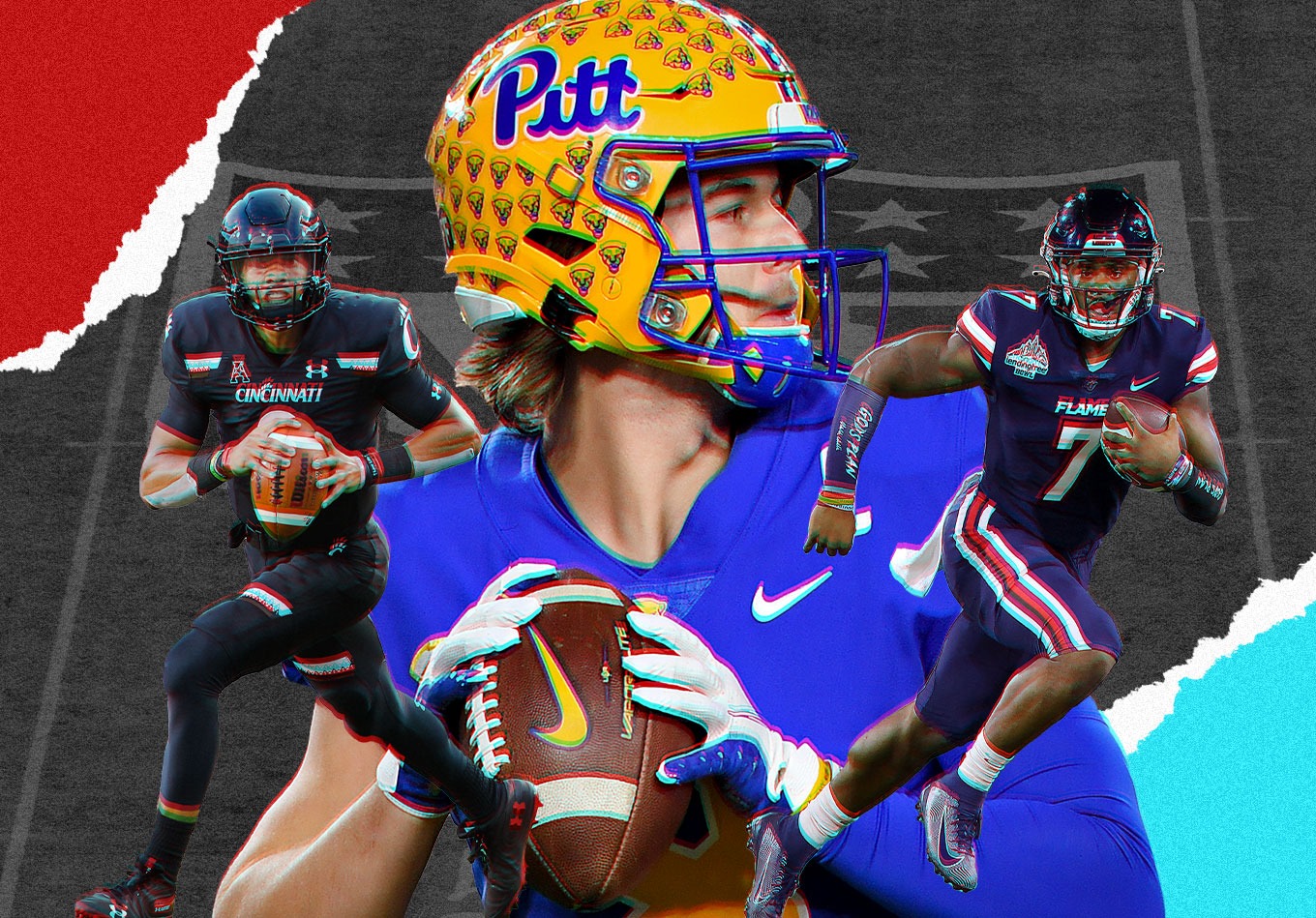 The Forgotten Five: Is This Year’s Quarterback Class Really That Bad?

The 2021 NFL Draft was unreservedly the year of the quarterback. The 2022 draft is anything but.

A year after quarterbacks went 1-2-3 in a first round that saw five taken in total, it’s tough to make the case for any of the consensus best five from this year’s uninspiring crop going in the top 10.

None of that quintet come without significant concerns that will make it hard for franchises to justify spending a premium pick to make them the quarterback of the future.

But there’s a clear hierarchy among the group, with two players being the standout choices for teams eyeing a potential day-one starter and one prospect standing alone as the home-run swing who brings as much risk as he does reward.

Quarterbacks inevitably get pushed up the board in the draft, but the case for the group best placed to receive that bump is not an easy one to make.

Talk of Kenny Pickett going in the top 10, with the Carolina Panthers viewed as a landing spot due to his connections with head coach Matt Rhule, has raised plenty of eyebrows.

Yet for all the justifiable concerns about taking a quarterback whose ceiling at the highest level may be limited due to arm strength that can make deep throws outside the numbers a challenge, the reality is that the former Pittsburgh quarterback is the most pro-ready player at the position in this class.

Last season, Pickett produced an 82.7 well-thrown percentage – the highest ratio of anyone in the draft. His pickable pass rate of 2.11% was also the best in class.

Pickett excels at throwing with timing and anticipation, frequently hitting his receivers in stride to maximize their potential to create yards after the catch. He can make throws with pressure in his face and moves well in the pocket to escape pressure while also succeeding at breaking structure and creating with his legs.

Having displayed accuracy in throwing across his body on the run, Pickett will not enter the league with the “statue” concerns that Mac Jones faced last year. In fact, he led the class with an 88.2 well-thrown percentage when scrambling.

And, though the ball does often die in the air when he goes deep, Pickett’s completion percentage of 51.4% on 20-plus yard throws put him top of the class, while he was second in well-thrown percentage (68.1) on such attempts.

The upside of a top-10 selection may be absent from Pickett’s game, but he should be the leading candidate if a team is looking for a rookie who can play right away and the gap between him and Cincinnati’s Desmond Ridder is perhaps larger than many would believe.

Ridder will go into the league having had the benefit of succeeding while being asked to operate in a manner that should help him adjust to the NFL quicker than most. He showed calm under pressure, negating it through intelligent pocket movement. And he consistently worked through his progressions before finding his checkdown option.

Another impressive timing thrower who is a better athlete than he’s given credit for and boasts a stronger arm than Pickett, deep accuracy will be the main concern surrounding Ridder at the next level. His overall well-thrown percentage of 75.7 was the third worst of the class and his 58.6 mark on downfield throws was second from the bottom.

Ridder can offer a baseline of quarterback play because of what he was asked to do at Cincinnati, but teams must decide whether that’s worth the cost of a late first- or high second-round pick when there is the possibility to swing for the fences on a higher ceiling quarterback who may take significantly longer to blossom into a starting-caliber player.

Unquestionably the most divisive quarterback of the 2022 class is Liberty’s Malik Willis, who between his elite-level arm and his remarkable proficiency running the ball in the open field has the highest upside of any signal-caller in this year’s crop.

With his 27 rushing touchdowns tied with Malik Cunningham for the most by an FBS quarterback over the last two seasons, Willis has demonstrated speed, vision, elusiveness and contact balance as a runner – making him a threat with the ball in his hands from anywhere in the field. Willis led all quarterbacks in this class with a yards per carry average of 6.64 on scrambles and was second with 7.42 on designed runs.

Yards Per Carry on Scrambles and Designed Runs Among QB Prospects

Adept at completing off-platform throws and displaying unerring accuracy throwing on the move, it’s extremely exciting to think about what Willis could become. His ability to blend touch and velocity when going deep allowed him to post the fourth-best well-thrown percentage (61.1) in the class on throws of 20 yards or more.

Willis fits the role of modern-day NFL quarterback better than any of his contemporaries in the draft, but harnessing his obvious potential will take time.

So little was asked of him by Hugh Freeze at Liberty that there are question marks over whether Willis will be ready to start in the NFL even after a year on the bench.

Though he can get through his progressions and perform full-field reads, Willis struggles significantly as a processor. He plays far too slow in working through his reads, leading to him holding the ball too long and failing to hit open receivers underneath.

Playing too slowly at the NFL level is a recipe for disaster. A team will fall in love with Willis’ traits, but they must be prepared to be ultra patient in waiting for the right moment to maximize them.

A Rebel With a Cause…for Optimism?

Willis has remained in the QB1 discussion despite struggling in his only 2021 game in which he went up against one of his quarterback counterparts in this class.

Perhaps unsurprisingly given their respective supporting casts, Willis was outplayed when he and Liberty faced off with Ole Miss and quarterback Matt Corral.

Corral isn’t in the first-round discussion even after a season in which he helped the Rebels to a 10-win season and delivered a well thrown ball on 80.7% of his pass attempts.

He displayed that accuracy while averaging the lowest air yards per attempt (8.20) of any of the top quarterbacks. A decisive thrower to the short and intermediate areas, Corral had the confidence to let it rip with impressive velocity due to playing in an offense that relied predominantly on run-pass option plays that provided him with open looks.

When the throwing windows got tighter, Corral struggled to display the same accuracy and consistently risked turnovers on deep passing attempts. No quarterback in the 2021 class had a higher pickable pass rate on throws of 20-plus yards downfield than Corral’s 9.80%.

Corral, though, does have the arm to push the ball downfield with success. That was reflected by his well-thrown percentage of 60.8 on deep attempts, which put him less than a percentage point behind Willis.

Possessing the elusiveness in the pocket to evade pressure and the athleticism to be a viable threat on the ground, Corral ticks a lot of the boxes required for a quarterback to succeed in the modern NFL.

However, after playing in such a simplified offense at Ole Miss, it would be a significant stretch to expect him to be able to helm an NFL attack early in his pro career.

The team that invests in Corral will likely initially view him as a high-end developmental backup and that’s also the role North Carolina’s Sam Howell can expect to fill for many of the same reasons.

Howell understandably struggled to adapt after losing NFL draft picks Dyami Brown, Michael Carter and Javonte Williams following the 2020 season and there was little in last year’s tape to build a compelling case for him as a first-round pick.

Blessed with the arm strength to make throws to every level, Howell averaged more air yards per attempt (11.45) than any quarterback in the class. However, only Willis had a lower well-thrown percentage than Howell’s 75.6 and that declined to 50.0% on throws of 20 or more yards.

Simply put, the consistency throwing the ball was not there for Howell in his final season as he was reliant on one-read RPO passes and scrambles or designed runs. He frequently ran the ball if his first read was not open, showing the contact balance to stay on his feet through attempted tackles when he did so.

Howell’s 8.42 yards per carry average on designed runs was the highest among quarterbacks in the class. The blend of his huge arm and intriguing running ability is likely to entice a team into taking a bet on him as a project on Day 2, but the seemingly unlikely road to Howell being a viable NFL starter will be a long one.

6 hours ago The Analyst