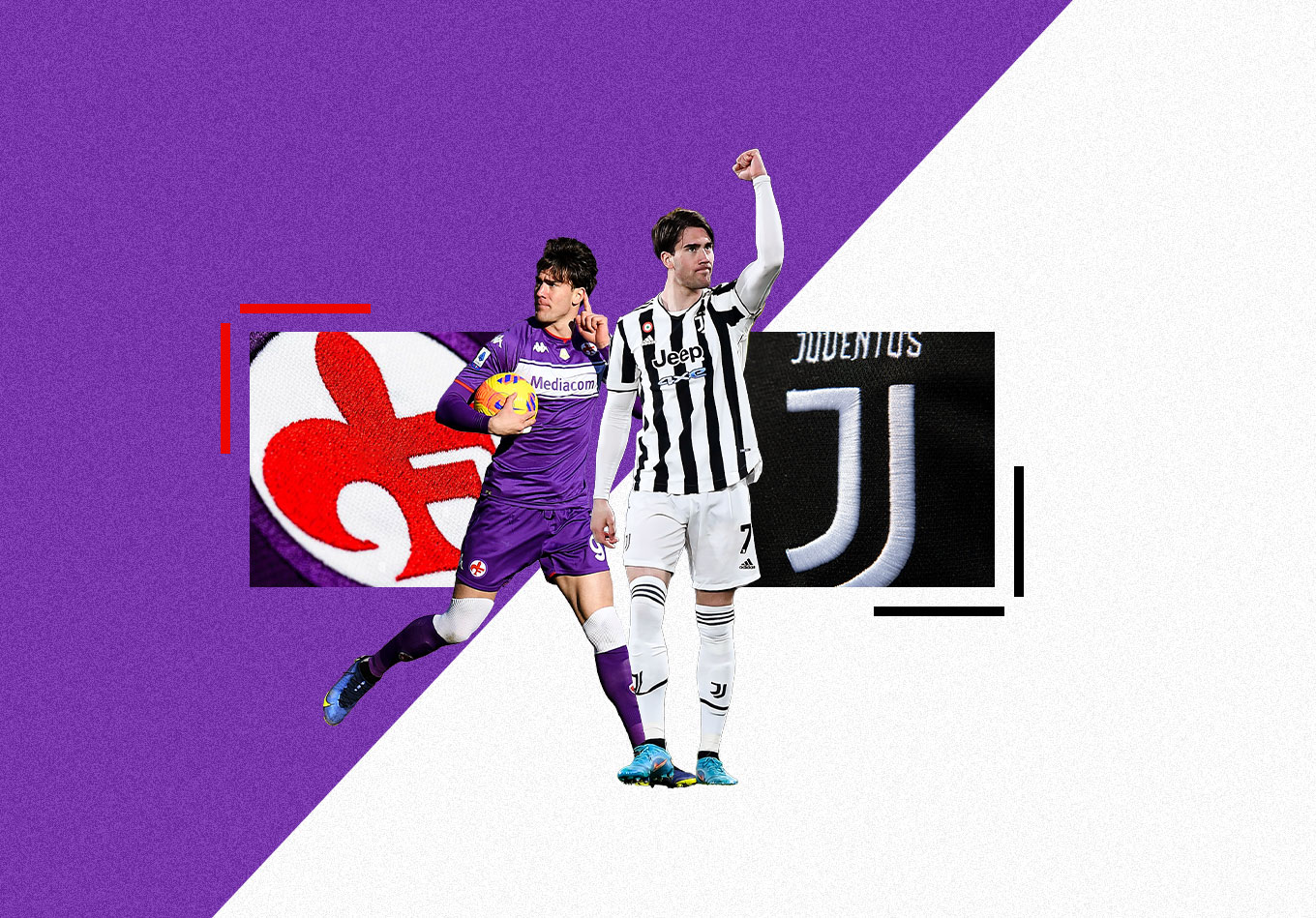 Dusan Vlahovic is not the first to leave Fiorentina for Juventus, but he is unlikely to get a warm reception in the Coppa Italia semi-final.

What do Dusan Vlahovic, Dodi Lukebakio and Gaetan Laborde all have in common?

As of this moment, not much – aside from having been touted as the next Newcastle United signing. But if Vlahovic gets a goal for Juventus against Fiorentina on Wednesday, he will join Wolfsburg’s Lukebakio (who joined on loan from Hertha Berlin) and Rennes’ Laborde (who signed from Montpellier) as the only players in Europe’s top five leagues to score for and against the same team this season.

Vlahovic said his feelings were “a bit mixed” as he contemplated facing the Viola at the Artemio Franchi, where he spent four years after joining as an 18-year-old from Partizan. “It’s a bit strange,” he told DAZN, to prepare for a game against the team for whom he scored 33 times in Serie A in 2021, equalling the competition’s calendar-year record set by Cristiano Ronaldo – the man he was bought to replace in Turin.

The sentiment among Fiorentina’s faithful will be a bit more, well, partisan. Vlahovic’s January transfer, completed on his 22nd birthday for an initial fee of €70million, sparked levels of fury among the fan base arguably not seen since the Roberto Baggio riots of the early 1990s. Fiorentina ultras vented their anger not just at the player, but at the club itself, lambasting president Rocco Commisso for doing deals with “the ultimate evil” after previously promising never to sell their best players to the hated Bianconeri.

Meanwhile, Vlahovic has got on with the day job of scoring goals, with three in his past two games. He certainly hit the ground running on the European stage, scoring after only 32 seconds of Juve’s first leg against Villarreal. In doing so, he became just the third player in UEFA Champions League history to score inside the first minute on their very first start in the competition, after Andreas Möller (for Borussia Dortmund vs. Juventus) and Ishak Belfodil (for Hoffenheim vs. Manchester City). His underlying numbers (4 shots and 0.45 xG per 90) are slightly down from his Fiorentina spell but are still very healthy. Those will surely only climb as he gets more acclimatised in Turin.

Juve are beginning to hope of a surprise late challenge for the Champions League and Serie A titles. Before then comes the small matter of a Coppa Italia semi-final in Florence, and the chance for Vlahovic to take a step closer to a first trophy outside Serbia by knocking out his old employers.

Baggio isn’t the sole reason Fiorentina don’t like Juventus, but ask someone to explain the rivalry and his name will likely come up pretty quickly.

The pony-tailed posterboy of Italian football developed into a star in his five years in Tuscany even before his rise to global fame at the 1990 World Cup on home soil. It was in that same year that Juve signed him from Fiorentina for an approximate fee of £8million, smashing the world transfer record and sparking furious Fiorentina fans to take to the streets in protest.

Baggio claimed he never really wanted to leave and, when he returned to face them in Bianconeri colours on April 7, he refused to take a penalty ostensibly out of concern that goalkeeper Gianmatteo Mareggini would know where he would put it. Luigi Di Biagio stepped up instead, missed, and Juve lost. Picking up a Fiorentina scarf didn’t help Baggio to endear himself to the Juve faithful, either.

Still, over the next five years, Baggio would fire them to Serie A, Coppa Italia and UEFA Cup glory and become the first Italian since Paolo Rossi in 1982 to win the Ballon d’Or (it would be 13 more years before another, Fabio Cannavaro, did the same).

If Baggio’s transfer sparked a riot, Giorgio Chiellini’s permanent move to Juve in 2005 prompted more of a quiet grumble. He spent 2004-05 with the Viola after they and Juve reached a co-ownership deal, so it was always anticipated the suits in Turin might stump up the full amount for his registration rights.

Of course, watching Chiellini win nine Scudetti, five Coppa Italia crowns and Euro 2020 as part of a glittering Azzurri career has left plenty of Fiorentina fans with an unshakeable sense of ‘what if’.

In December 2005, Chiellini started against Fiorentina in a frankly unfair back four that also featured Lillian Thuram, Fabio Cannavaro and Gianluca Zambrotta, with Juve claiming a 2-1 win thanks to Mauro Camoranesi’s 88th-minute goal.

He’s since gone on to face Fiorentina 17 times in Serie A, losing just twice. But, more importantly, Chiellini has become a Juve great – he is just two games away from putting himself third behind Alessandro Del Piero and Gianluigi Buffon on the club’s all-time appearances list.

Bernardeschi may have moved out of season, but that didn’t stop Fiorentina fans venting their anger in response to his €40m switch. They hung a banner outside the stadium that made their displeasure fairly clear. It read: “Who wouldn’t like to spit in your face… you s***** hunchback”.

His move to the Old Lady came after a something of a breakthrough season as he scored 11 times in Serie A – that was an improvement of nine from the two he’d got the previous campaign.

Unsurprisingly he was jeered and targeted by banners on his first return to Florence in February 2018, though Bernardeschi had the last laugh, curling a free-kick in as Juve won 2-0. It’s fair to say he didn’t abstain from celebrating, letting out a huge scream.

“I celebrated when I scored because I believe a professional should respect the fans. I’ve always been grateful to Fiorentina, and always will, for the way they looked after me and helped me develop, but I made a career choice and now I play for another team,” he told Sky Sport Italia at the time.

But Bernardeschi’s struggled to have the same kind of importance to Juve, rather being used as more of a utility and back-up player, which is reflected by the fact he’s scored just eight league goals for the club.

If Fiorentina fans are upset on Wednesday, just wait until next season when Federico Chiesa is fit again and lining up alongside Vlahovic. The pair appeared together 41 times for the Viola before Chiesa’s October 2020 departure for Turin.

Chiesa, who is out for the rest of the season following damage to his anterior cruciate ligament, will be a permanent Juve player in 2022-23. For now, remarkably, he is merely on loan from Fiorentina.

Such deals that appear to favour the buying club are not uncommon in Serie A, but Fiorentina supporters could be forgiven for being furious as their club again accommodated the transfer of a star player to their bitter rivals.

Chiesa – the son of former Fiorentina forward Enrico – dazzled in his final full season in Florence, with 11 goals and six assists, and has done likewise for Juve following a slightly tricky start. At the time of his injury – before Vlahovic’s arrival – he was the Bianconeri’s standout performer.