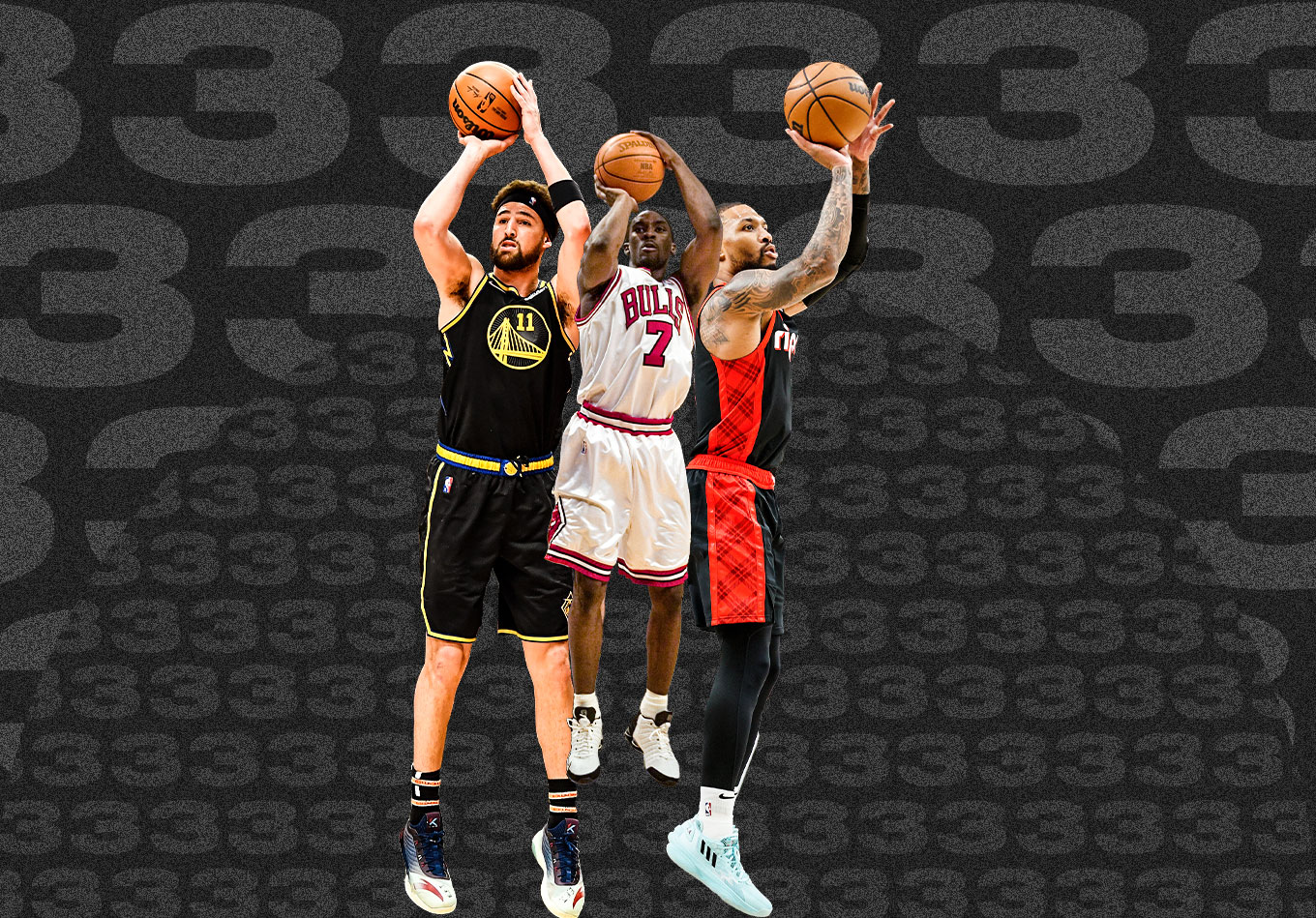 Making It Rain: The Most 3-Pointers Made in an NBA Game

It didn’t happen all at once, but eventually, several analytical minds realized something that was so staggering it changed the game of basketball forever.

And with that, we started trending toward the 3-point revolution. Now, the game is drastically different than it was just a decade ago.

This generation of NBA players all grew up learning how to shoot from distance and while the aesthetics of a game with so many 3-point attempts can be debated, there is no denying how fun it is when a player or team gets hot and hits several long-range shots in a row.

So we’re highlighting the best 3-point shooting performances of all time by players and teams. And, not surprisingly, we start with a Golden State Warrior.

It’s the other half of the Splash Brothers that owns the single-game 3-point record, which is something Thompson probably reminds Steph Curry of occasionally.

The amazing thing about Thompson’s performance is that he could’ve made even more 3s if the Chicago Bulls would’ve kept the game close. But Thompson helped make sure that wouldn’t happen, hitting an incredible 10 3s in the first half as the Warriors led 92-50 – at halftime.

Thompson hit another four 3-pointers in the second half to break the record of 13 in a game held by Curry. With the huge second-half lead, Thompson played just 27 minutes, meaning he hit a 3 every two minutes he was on the court. There’s a reason he’s considered one of the best shooters of all time.

Most of the other players who have hit at least 12 3s in a game aren’t surprising names. Curry is the best shooter ever, Zach LaVine of the Bulls is an extremely talented volume scorer playing in the modern era, and Kobe Bryant of the Los Angeles Lakers was one of the best scorers ever. But Donyell Marshall is the one that sticks out.

Lillard has built up a resume of great playoff moments for the Portland Trail Blazers, including two series-winning buzzer-beaters. And his 12 3-pointers in one game stand alone atop the playoff record book, although it ended up being in a double-overtime loss that allowed the Denver Nuggets to go up 3-2 on the Blazers in the first round of the 2021 playoffs.

It’s impossible to put the loss on Lillard, though. He also finished with 55 points, which is tied for the fifth-most points in a playoff game. He scored 17 of his team’s 19 points in the two overtime periods and played a game-high 51 minutes.

A familiar name has the second-most 3s in a playoff game, and he did it in one of the best playoff comebacks ever. The 73-win Warriors famously lost in the NBA Finals, but the team came dangerously close to not making it there at all. Down 3-2 in the series and 83-75 entering the fourth quarter of Game 6, the Warriors needed a huge fourth quarter to keep their season alive. And Klay Thompson delivered.

He had already hit six of 12 3-point attempts through three quarters, but he took it up a notch in the fourth, torching the Oklahoma City Thunder for 19 points on 6-of-9 shooting – including 5 of 6 on 3s. The Warriors went on to win the game 108-101 behind Thompson’s 41 points and closed out the Thunder in Game 7 in a series that may have shifted the balance of power in the league in a monumental way, as Kevin Durant joined the Warriors the following season.

Ben Gordon was a guard before his time. He would’ve been a great volume scorer off the bench in today’s NBA. He could get hot in a hurry and no stat is more telling of that than the fact there are three games in NBA history in which a player made nine 3-pointers and didn’t miss any – Gordon has two.

His first one was in 2006 for the Bulls against the Washington Wizards, and Chicago needed every one of them to come out on top. Gordon hit four of his 3-pointers in the fourth quarter and saved the most important one for last, as he hit a game winner with 54 seconds left to put the Bulls up for good in a 103-101 win.

Gordon only tied the record after Latrell Sprewell had accomplished the feat before him. Sprewell knocked down all nine of his 3-point attempts in 2003 against the Los Angeles Clippers. He ended the day with 38 points in a 105-92 win.

And while his Detroit Pistons tenure didn’t go quite as well as his Bulls one did, Gordon still had his moments. He duplicated his feat of nine 3-pointers without a miss en route to 45 points in 2012. The Denver Nuggets got the last laugh, though, as JaVale McGee dunked a missed free throw with five seconds left to lift the Nuggets to a 116-115 victory.

It was the first full week of the season and the Miami Heat were coming off an NBA Finals appearance in which the team stomped the Milwaukee Bucks 4-1 in the second round.

And while you can’t avenge a playoff series in one regular-season game, the Bucks did as much as they could to show they were a new team. They hit an NBA-record 29 3-pointers in a 144-97 victory. Nine of the 10 Bucks who played hit at least one 3-pointer, with Jrue Holiday leading the way with six 3-pointers made.

The one Bucks player who didn’t hit a 3? That would be reigning MVP Giannis Antetokounmpo, who missed his two attempts and only had seven points on the game. He was probably okay with the 47-point victory and NBA record, though.

There have been six other instances of teams hitting at least 27 3-pointers and all but one came in 2021. The lone exception, the 2018 Houston Rockets, did not spread the wealth as much as the Bucks did. Eric Gordon and James Harden combined for 13 of the 27 3s as the Rockets blew out the Phoenix Suns 149-113.

The Warriors get all the credit for the 3-point revolution, but their rivals from the Eastern Conference at the time were pretty good at knocking them down too.

It’s hard enough to guard LeBron James, but it’s near impossible when the team around him is hitting 3-pointers like the Cavaliers did against the Atlanta Hawks in Game 2 of the Eastern Conference semifinals in 2016.

J.R. Smith led the way by hitting seven of his 13 attempts, and Kyrie Irving and James himself chipped in four 3s apiece. The Cavaliers led by 15 after one quarter and the game was never close after that. At the end, the Cavaliers took a commanding 2-0 lead in the series with a 123-98 win.

The team would go on to win the championship, in large part due to their phenomenal outside shooting. Thirty-six teams have hit at least 20 3-pointers in a playoff game and all but one have come since 2011. The one exception also came in Game 2 of a conference semifinal sweep, although this one was a bit more surprising.

The 1996 Seattle SuperSonics hit 20 3s to take Game 2 against the defending-champion Rockets. The Sonics only took 27 3-point shots in the game, meaning the team shot an absurd 74.1% on treys. It’s the highest percentage in a game – regular season or postseason – for a team that made at least 20 3-pointers.

The Sonics would go on to lose to the Bulls in the NBA Finals, as Michael Jordan and Co. got the first title in the team’s second three-peat.