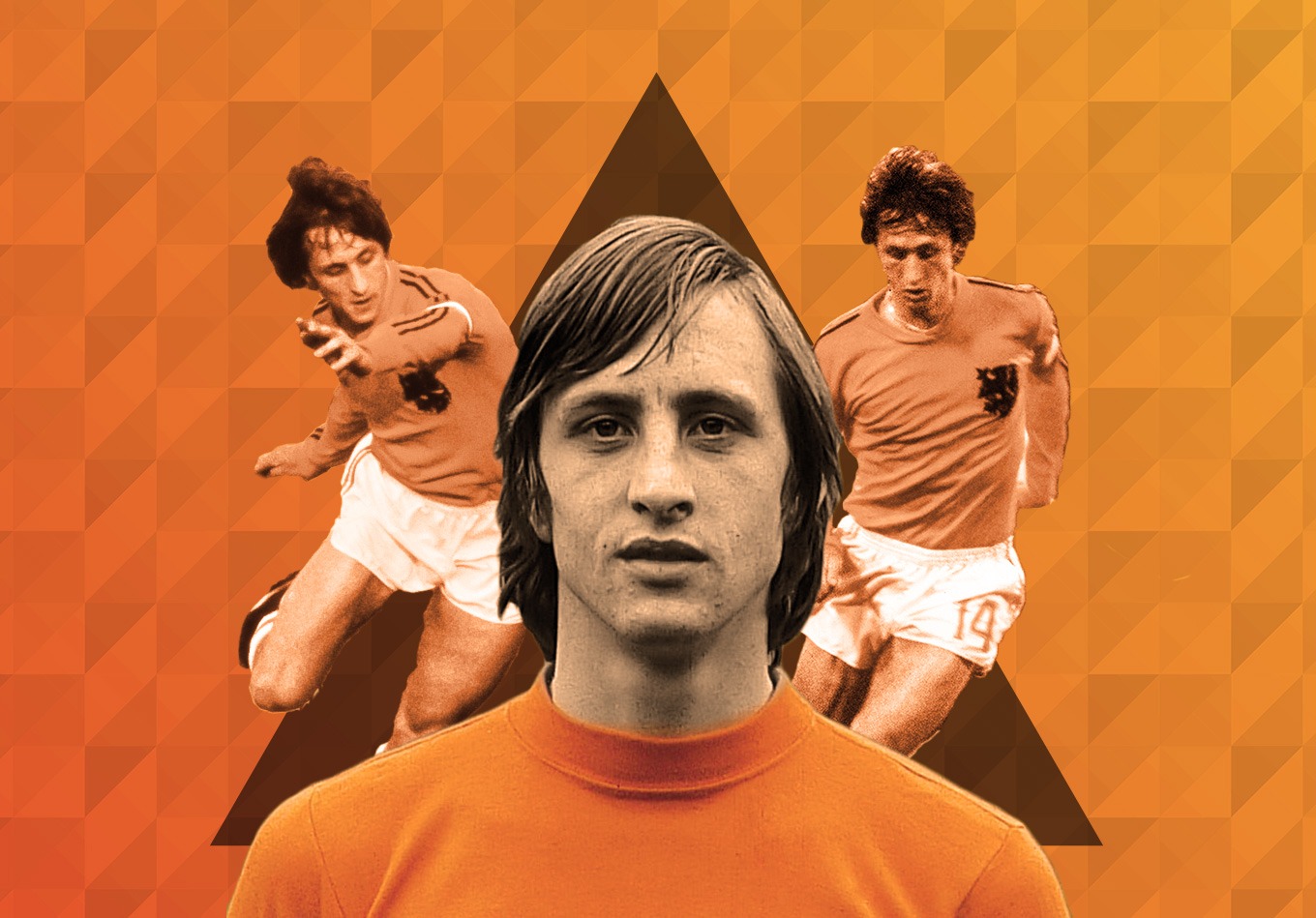 It’s been six years since one of football’s greatest players passed away at the age of 68. Johan Cruyff, pioneer of the Dutch Total Football Philosophy, captained his nation to the World Cup final in 1974 and put the Netherlands on the football map forever. We take a deeper look into his legendary performances at that tournament and the numbers that made it so special.

The Road to Germany

After dramatically failing to qualify for the 1972 European Championships, František Fadrhonc appointed Johan Cruyff as the captain of the Dutch national team. And had it not been for Cruyff, the Netherlands might not have even qualified for the 1974 World Cup in West Germany. Cruyff scored a joint-high seven goals in the UEFA qualifiers leading into the finals, which helped the Netherlands narrowly hold off Belgium on goal difference and qualify for their first major tournament since 1938.

Rinus Michels – Cruyff’s manager at Ajax until 1971 and at Barcelona in 1973-74, took over Fadrhonc’s duties after the qualification campaign to prepare a talented generation of players for the finals.

The Dutch World Cup squad was about perfectly balanced, from 22-year-old youngsters Johan Neeskens and Johnny Rep to the more experienced Rob Rensenbrink, Wim Suurbier and Willem van Hanegem. With the majority of the squad having won at least one European Cup with Feyenoord (1970) or Ajax (1971, ’72, ’73) in the years leading up to 1974, and with the 27-year-old Cruyff as their orchestrator, the Netherlands were certainly considered contenders for the upcoming World Cup tournament.

On the first matchday of the tournament, the Netherlands recorded a routine 2-0 victory over Uruguay. It was a game in which the Dutchmen fired 25 shots while facing only one, and in which Johan Cruyff dictated the pace by recording 107 touches, at least 23 more than any other player in the game. This tally included 16 touches in the Uruguayan area, a tally of touches in the opposition box that has since been topped by just one player in a match in the 11 World Cups since.

Sweden awaited on the second matchday, a game in which Jan Olsson famously became the victim of Cruyff’s soon-to-be signature move. The Netherlands’s star fooled Olsson, turned him inside-out and the ‘Cruyff Turn’ was born. Although the turn wasn’t followed by a shot, it was one of the 12 times Cruyff successfully dribbled past a Swedish opponent on the day. Only two players have managed to complete more take-ons in a World Cup match since, showing just how elusive Cruyff was in the game.

Sweden may have stopped the Netherlands from scoring (0-0), but they secured their progress in the third game against Bulgaria. Cruyff was magnificent – again – by making the final pass leading to 11 of the Netherlands’ 23 non-penalty shots in the match. No other player has managed to create 11 goalscoring chances in a World Cup game since 1974, and Cruyff also won a penalty in the match against the Bulgarians. The captain assisted the Netherlands’ final goal against Bulgaria (4-1) as the Dutch won their group. Although Cruyff had thus far been involved in just one goal, the Dutch captain was leading the tournament charts for created chances (22), completed take-ons (25), touches in the opposition box (36) and passes into the opposition box (50). His talent was certainly shining through.

Keeping these figures in mind, it was hardly a surprise Cruyff scored three goals and assisted two more in the games against Argentina (4-0) and Brazil (2-0). Between those victories, the Dutch team faced two obstacles in East Germany (2-0 win) and a late-night dive in the Wald’s Hotel swimming pool, but Cruyff’s abilities brought the Netherlands to their first World Cup final.

Besides scoring and assisting goals, Cruyff’s value for the Dutch Total Football was expressed in his high tally of progressive ball carries – the number of times he moved the ball at least five metres upfield. The captain had the most progressive carries per 90 minutes at the 1974 World Cup (19.7), the most famous of which was the dribble leading up to the first penalty in the final, where opponents’ West Germany didn’t record a single touch of the ball until fouling the Dutch talisman.

The 1974 World Cup final was 45 seconds old when Cruyff was fouled by Uli Hoeneß, after the forward drove with the ball from near the halfway line into the box. Johan Neeskens’ third penalty goal of the tournament – 86 seconds after kick-off – is still the fastest goal in a men’s World Cup final.

Having scored three goals and assisted three more, plus his penalties won against Bulgaria and West Germany, Cruyff had a direct involvement in eight of the 15 Dutch goals to that point. However, in the remaining 88 minutes of the final, the Germans managed to hold off the Dutch star, allowing him to register just two key passes without firing a single shot – both tournament lows for Cruyff.

West Germany had already turned the match in their favour before half-time, thanks to a penalty from Paul Breitner in the 26th minute and a 43rd-minute strike from Der Bomber Gerd Müller. The second half didn’t bring the Netherlands and Cruyff what some thought they deserved as arguably one of the best international teams ever.

And so it follows they’re widely regarded as one of the best sides to not win the World Cup.

Cruyff created 36 chances for his team-mates during the 1974 World Cup, an average of 5.1 per 90 minutes. It’s an average that hasn’t been matched by other legendary players at their best, including Pelé (4.7 in 1970), Diego Maradona (3.9 in 1986) and Xavi (4.3 in 2010). A dozen of the goalscoring chances he created came following a ball carry, which was twice that of any other player in the tournament.

The legendary performances of Cruyff in 1974 saw the Netherlands rise to the top world of football. Layer on top of his individual legend the much-adored Total Football Philosophy, and the memories of the second-place side in Germany will always remain a part of World Cup history.

Legend in the Netherlands

Almost 10 years before the 1974 World Cup, Cruyff made his league debut for Ajax in November 1964. He was 17 years and 204 days old, and it was the day he initiated the tradition of talented young Ajax players scoring in their club debut. He was certainly a promising young player, but the legend he would become was far from written.

Cruyff won the Eredivisie a joint-high nine times (level with Danish PSV icon Jan Heintze) in the 12 seasons he spent in the division. He won it six times in the eight Eredivisie seasons between 1965 and 1973 with the last three complemented with European Cups. The Dutchman transferred to Barcelona in the summer of 1973, joining former Ajax coach Rinus Michels. After his move to Spain, Cruyff helped Barcelona win their first league title in 14 years. By scoring 16 goals, Cruyff finished the season as the club’s second-highest scorer and the fourth-highest in the league.

However, following a conflict with the board, Cruyff moved to Ajax’s eternal rivals Feyenoord. It was a seemingly impossible move for Ajax’s greatest player ever, and it was one that helped the Rotterdam side to their first Eredivisie title in a decade.

Cruyff was victorious just about everywhere he touched a ball, winning 80% of the Eredivisie matches he played (245/308). Unsurprisingly, now six years after his death, that’s still the highest win percentage among players with 100+ appearances in Dutch top-flight history. That record may disappear one day, but Cruyff’s status as a pioneer of modern football won’t go with it.