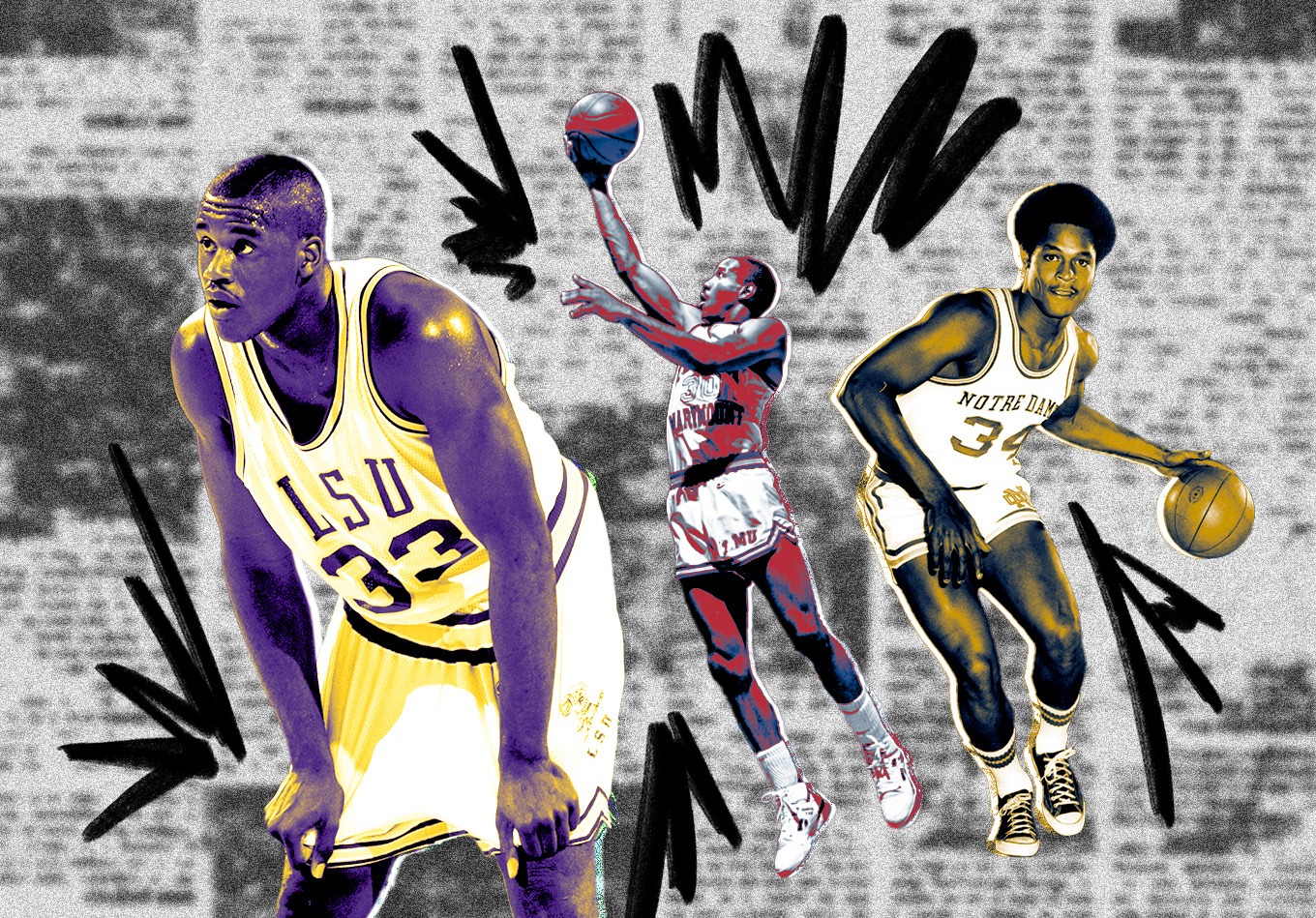 Here are the most notable NCAA Division I men’s basketball tournament records in March Madness history.

Carr was a walking bucket at Notre Dame. In three years with the Fighting Irish, he averaged 34.6 points, including a career-high 38.1 per game in the 1969-70 season. Against Ohio, Carr exploded for 61 on 25-of-44 shooting. Remember, this was before the implementation of the 3-point line, so Carr scored 50 on field goals alone. He added 11 points from 14 free-throw attempts, helping push the Fighting Irish past the Bobcats 112-82. Carr averaged 52.7 points over three tournament games (also an NCAA record), as Notre Dame lost to Kentucky in the regional semifinals.

Wade is tied for 97th in career assists in NCAA history with 698 despite sitting out one season after transferring from Oklahoma to UNLV. Though he was just sixth in scoring on a Rebels team that claimed the No. 1 seed in the West Region, he led the team with 10.7 assists per game. Despite just scoring four points in the national semifinal against the Hoosiers, Wade dished out 18 assists, breaking a record set by Keith Smart, Wade’s Indiana counterpart that night, earlier in that same tournament (15 assists). However, Indiana outlasted UNLV 97-93 to advance to the national championship game against Syracuse.

Most Rebounds in a Game: 34

To understand this record, you must first understand the team’s shooting performance. The Owls and Huskies combined to miss 114 shots, shooting 30.5% from the field collectively. So there were plenty of opportunities to grab missed shots. And Cohen took advantage. He missed 16 shots of his own, leading to his NCAA-record 34 rebounds in a single tournament game. The Owls also set the then-tournament record for team rebounds with 76. Temple advanced to the Final Four but lost to Iowa 83-76.

This is not the only time you will see a stat from Loyola Marymount’s 149-115 win over Michigan. Head coach Paul Westhead’s “System” took college basketball by storm and led Loyola Marymount to the best era of men’s basketball in school history. Fryer hit 11 of 15 3-pointers (73.3%), scoring a game-high 41 points. In four tournament games against New Mexico State, Michigan, Alabama and UNLV, Fryer hit 23 3-pointers on 43.3% shooting.

Most Free Throws Made in a Game: 23

Bob Carney of Bradley University and Travis Mays of Texas each made 23 free throws in a single NCAA Tournament game, but accomplished the feat nearly 36 years apart to the date. Carney’s 23 points from the charity stripe contributed to his game-high 37 as Bradley knocked off Colorado 76-64. Bradley advanced all the way to the national championship before losing to La Salle 92-76. Mays also led his game in scoring as he totaled 44 points in the 10th-seeded Longhorns’ victory over Georgia 100-70 in the first round. Texas advanced all the way to the Elite Eight before losing to Arkansas 88-85.

Shaq at LSU was a sight to behold. In three seasons with the Tigers, O’Neal blocked 412 shots, which now stands at 19th all time. Against BYU, O’Neal blocked 11 shots as the Cougars shot just 36.2% from inside the arc. LSU beat 10th-seeded BYU 94-83 before falling to Indiana 89-79 in the second round. O’Neal blocked five shots against the Hoosiers.

Most Steals in a Game: 8

I told you we’d come back to this game. The Lions dropped 149 points on the Wolverines in what is also the highest scoring game in NCAA Tournament history. LMU led 65-58 after the first half, which is not an uncommon final score to see in an NCAA Tournament game. The Lions then beat the brakes off of Michigan, outscoring the Wolverines 84-57 in the second half. In addition to Fryer’s 41 points, Bo Kimble scored 37, Terrell Lowery had 23 and Per Stumer added 21. Loyola Marymount’s Cinderella story would continue until the Elite Eight, where they lost to top-seeded UNLV 131-101.

Largest Margin of Victory in a Game: 69

Before Loyola Chicago were the darlings of the 2018 NCAA Tournament, they had only reached the Final Four one other year: 1963. That tournament run tipped off with a blowout of Tennessee Tech 111-42. This one was over in the first half, as the Ramblers outscored the Golden Eagles 61-20. Loyola scored 50 more points in the second half in the biggest rout in NCAA Tournament history. All five Loyola starters scored in double figures, with Ron Miller leading the way with 21 points. The Ramblers rode this momentum all the way to their first and only NCAA men’s basketball national championship, as they defeated Cincinnati 60-58 in overtime.

Hey, look at that! We’re back to this Loyola Marymount game, when the Lions connected on 21 3-pointers against Michigan. Yes, Fryer contributed 11 of those, but Per Stumer hit five 3s, Terrell Lowery made three, and Bo Kimble and Marcellus Lee each added a 3 of their own. As a team, LMU shot 52.5% from behind the arc in a 149-115 victory.