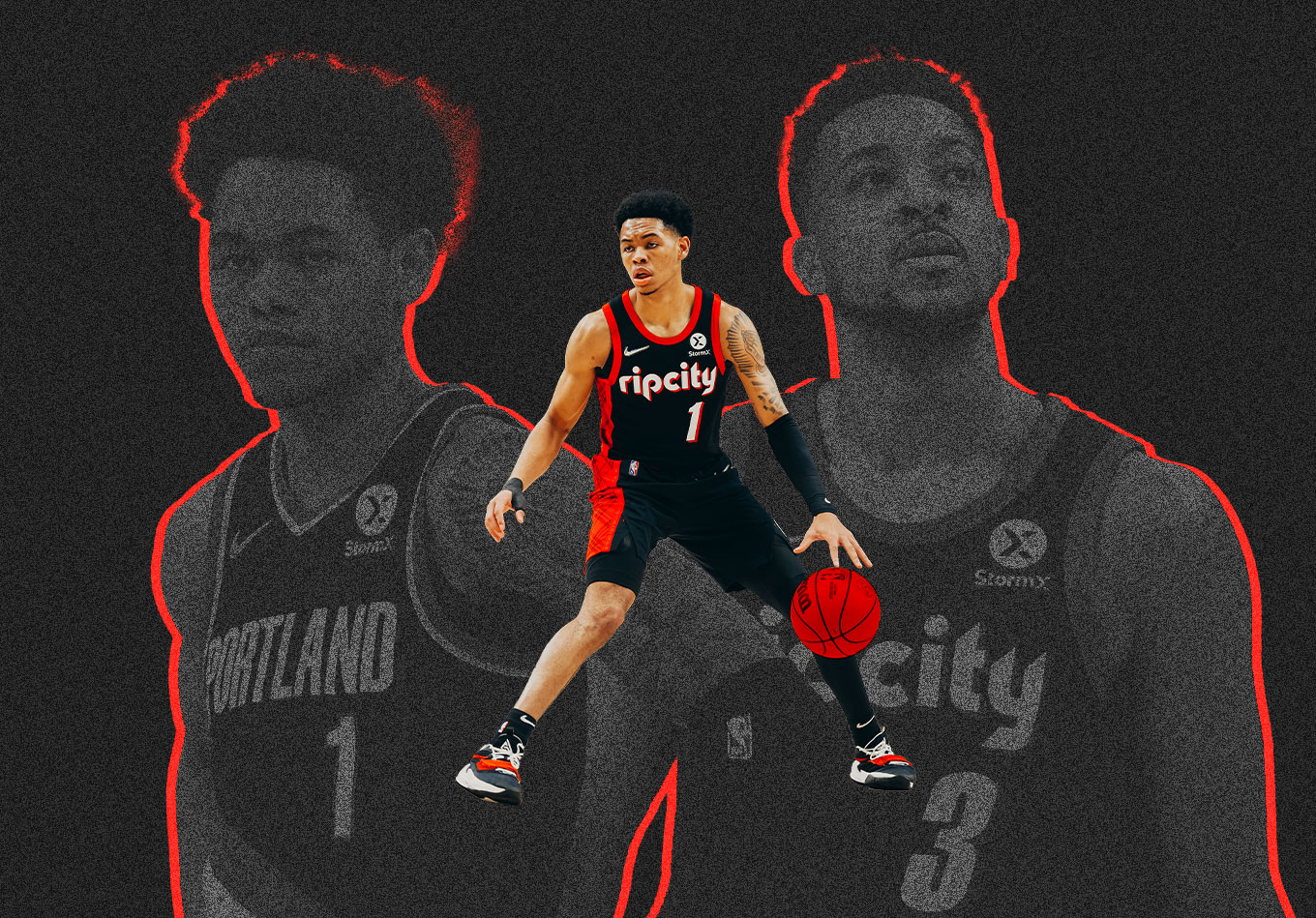 Every year, one of the most inspiring storylines revolves around the discourse surrounding the NBA’s Most Improved Player Award.

Well, we have a convenient tool for this dialogue in the form of a DELTA metric that highlights the change in one player’s DRIP – our Daily-updating Rating of Individual Performance – from the beginning of the season until now.

Currently ranking fifth in this measure is Anfernee Simons of the Portland Trail Blazers.

A major factor in his rapid ascension up the league hierarchy has been his scoring, which has escalated from a pedestrian 7.8 points per game last year to an astonishing 23.4 points since the turn of the calendar. The credit for his bonkers scoring outputs can be divide up into two play-type categories: pick and roll ball-handling, and spot-up shooting.

As pointed out in a recent Nerd Sesh video, Simons boasts one of the highest offensive ratings (1.04) when operating in the pick-and-roll – second only to Donovan Mitchell among players that run at least four a game (minimum 30 games played).

He’s a resilient contributor in these spots, flashing a counter for the various coverages teams try to deploy against him. If you try defending him in drop, he’ll hit you with his patented pull-up jumper or a crisp pocket pass to his original screener (first two clips). If you hedge or blitz, he’ll follow up with a step-back or a jump pass to a roller (the latter two clips).

Similar diversity exists with his spot-up game as well (94th percentile, according to NBA.com). Simons can relocate around the perimeter, cut from the wing to the corner when the paint collapses, stand pat when his man helps out one pass away, or trail road runners on the break to give them a release valve when they get stonewalled by a defender.

This season, Simons is still shooting 40.5% from 3-point range despite far less of his attempts from beyond the arc being of the open/wide-open variety (42.4% this season compared to 55.1% last season).

This phenomenon speaks to his pedigree as a tough-shot maker. A further indication of his proficiency in these spots is his career-high 46.8% midrange conversation rate. For comparison, his backcourt companion Damian Lillard – a man revered for his clutch heroics (the part of the game where tough-shot making often comes most in handy) – shoots only 42.1% for his career.

Having the ability to consistently knock down contested jumpers from multiple zones on the floor while still posting above-average efficiency (58.3% true shooting) gives the Blazers cause to believe that Simons is an inelastic scorer they can lean on in future playoffs – a setting defined by more focused defense and a lower frequency of open looks.

Of course, as is the case with most promising young players, Simons’ development into a bonafide 20 point per game scorer has prompted many to compare him to the last Blazer to dawn the Robin mantel in Portland:

When you dig deeper into the detail, you see that the two have far more in common than a backcourt running mate. Since CJ McCollum took on full-time starter duties in 2015-16 when he won the NBA’s Most Improved Player Award, he has never placed lower than the 71st percentile in pick-and-roll ball handling efficiency and the 77th percentile in spot-up shooting.

On top of that, he’s shooting a dazzling 47.2% from midrange over his career.

However, what differentiates the two at this point is McCollum’s luster in isolation. Last season (arguably his best as a pro), McCollum managed to blend success in the two aforementioned play types (83rd and 98th percentile, respectively) with DeRozian midrange shooting (49.0%) and 89th percentile isolationism.

Meanwhile, Simons currently sits near the bottom quadrant of the league in this taxonomy (28th percentile).

If I had to diagnose the underlying reason for this disparity, I would hypothesize that it has something to do with the spry young Simons not yet understanding the technical nuances of the art, such as identifying and being able to immigrate over to one’s “sweet spots” on the court. Still, the fact that Simons’ scoring production at 22 is impressive enough to garner comparison to McCollum’s is cause for praise nonetheless.

Unfortunately, the similarities between the two persist when assessing their unspectacular rim-finishing percentages and free-throw rates. While a gifted vertical athlete, Simons lacks the elite north-to-south speed necessary to consistently get two feet in the paint and, because of this, his numbers in these categories bear a stark contrast to the leading experts in the field:

When viewing Simons, you see not only an inability to finish in traffic but some trepidation to do s0. You may have noticed when I was breaking down his pick-and-roll game earlier, but I intentionally failed to mention how he takes advantage of switches, and that’s because, as of right now, he doesn’t.

While adept at neutralizing the other ball-screen coverages we analyzed, when he has a big switch on him, Simons typically opts for a less-efficient step-back triple over taking the slower defender downhill – a massive win for the defense in most cases.

As we’ve seen with Gilgeous-Alexander, Morant and Beal, being able to routinely take and make shots at the rim not only makes you an unstoppable pick-and-roll monster, but also allows you to transform into a paint-collapsing machine. That in turn enables you to create free-throw opportunities and easy perimeter looks for your teammates.

This is where the hour of reckoning comes into play with Simons’ development. If he strengthens his isolation scoring and continues to add to his already plentiful bag of tricks, the McCollum offensive threshold is well within grasp. However, even with his splendor, we know the limitations of a team featuring McCollum as its second-best offensive player.

For a Simons-Lillard pairing to reach uncharted horizons, the new blazing star will need to learn how to get to the rim more frequently and generate easy looks that way.

And maybe then the tandem can coalesce to reroute the franchise’s trajectory and, in the process, bring a title back to Portland.