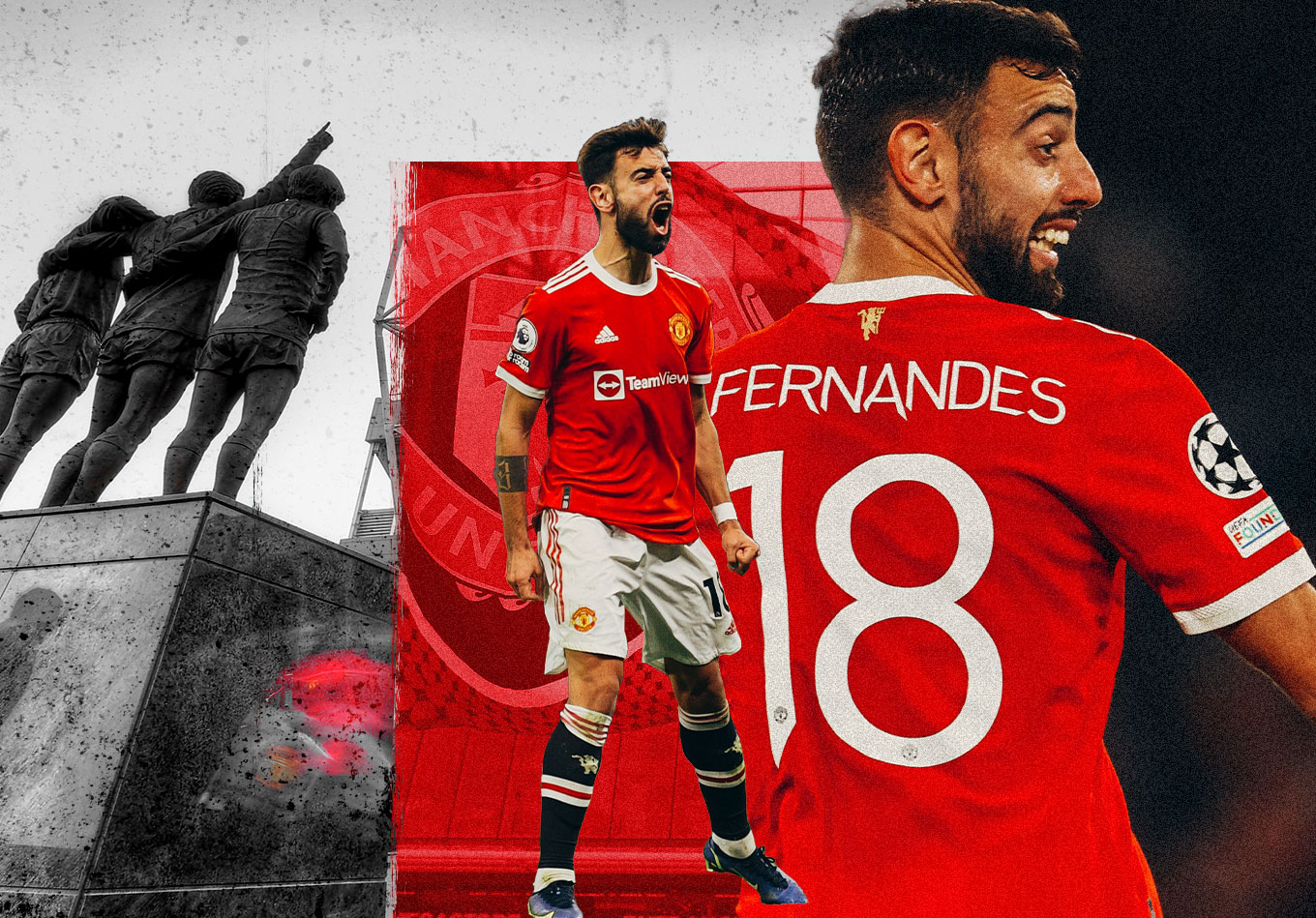 We Don’t Talk About Bruno: Two Years of Fernandes at United

Rewind to January 2020. At the time, Bruno Fernandes just seemed like he was becoming the latest in a long list of players who had been linked with Manchester United but ultimately never set foot in Old Trafford. Remember Nico Gaitan?

But, as it happened, United did get a deal done for the Portugal midfielder, who – on the evidence of his time at Sporting CP – was going to bring goals, craft and fire to the Red Devils’ engine room.

It would be fair to say he has surpassed the expectations of many fans and neutrals alike. While he undoubtedly has the capacity to frustrate, anyone who doubts his ability is surely just being contrarian.

Tuesday marks two years since his United debut, a disappointing 0-0 draw with – fittingly – Portugal Lite, or Wolves as they are known in the Midlands.

During his two years at United, Fernandes has become arguably their key man, best player and general lynchpin, the individual who most things are built around.

Yet, the noise around him this season would suggest United’s wider issues have started to catch up with him – but just how accurate is that? Has his level truly dropped?

Regardless of your opinion on Fernandes’ form, we can all agree he has been largely an excellent addition for United. Even when you take away the penalties, his 44 Premier League goal involvements since his debut is bettered only by Mohamed Salah (55), Harry Kane (46) and Son Heung-min (45).

His arrival introduced some much-needed creative consistency to the United midfield. Paul Pogba didn’t quite provide that – whether that’s entirely his fault is a debate for another time – but Fernandes has shown an ability to habitually unlock defences, with his 148 chances created in open play at least 18 more than any other player since 1st February, 2020.

But in a season that has proven so tumultuous at Old Trafford, not even Fernandes has escaped criticism, which appears to be levelled at him now more vociferously among fans than at any other point in his two years there.

His off-the-cuff style undoubtedly feeds that. If a player is trying the killer ball at every opportunity and it frequently fails, that’s obviously going to feed fan frustrations.

And to be fair, there has been a slight drop-off in his creative threat. He averaged 0.25 expected assists (xA) per 90 minutes across his Premier League career before 2021-22, the fourth-highest among players to play at least 1,000 minutes, and that’s at 0.21 for the current season – though that’s still only bettered by six players (minimum 1,000 minutes).

He’s never just been about threatening with his passing ability, though. Fernandes has been the club’s best source of goals from midfield in years – his nine non-penalty (np) top-flight goals last season has only ever been bettered twice by a United central midfielder in the Premier League era: Paul Scholes in 1995-96 (10) and 2002-03 (14).

To his credit, Fernandes already has seven this season despite his non-penalty xG slipping from 0.24 to 0.17 per 90 minutes. So, although he’s not getting into as good goalscoring positions, he remains a potent weapon, which highlights the class he possesses. Of course, some might suggest that goals haul is somewhat skewed by his hat-trick against a notoriously open Leeds United on Matchday 1, but he still deservers his dues for that performance.

Furthermore, his average of 2.9 chances created every 90 minutes in 2021-22 is actually up slightly on his record for his first 18 months at Old Trafford (2.6) – so, while certain factions of the United support might be growing frustrated by particular aspects of Fernandes’ game, it’s clear to see he still offers a lot.

Sequences information shows that too. In total so far this season Fernandes has been directly involved in 133 attacking sequences that have resulted in a United shot – whether that be through taking the shot himself, creating the chance of being involved in the build up to it. That’s more than any other player on the team. And the balance between those three facets shows Fernandes’ all-round importance to the side.

Out of His Comfort Zone

Another key element to be taken into consideration is the overarching institutional mess that has been Manchester United in 2021-22. The club is enduring a difficult season, with Ole Gunnar Solskjaer’s reign coming to an end and Ralf Rangnick coming in.

There have been considerable changes to the backroom staff and the team is undergoing a significant philosophical shift, both in terms of tactics and formation. Solskjaer’s plight came down to a collective failing, with so many players suffering a dip in form, and Rangnick’s introduction may well have been something of a shock to the system – he and the Norwegian are hardly cut from the same cloth.

This has clearly impacted Fernandes, given his usual ‘number 10’ role suddenly became less assured. While Rangnick has shown a certain degree of tactical flexibility, with United appearing to operate with a 4-2-3-1 against Brentford, for the most part they have played 4-2-2-2 or 4-3-3.

As such, Fernandes has had to adapt and that’s meant becoming something more closely resembling a roaming number eight, but with greater emphasis on operating towards the left.

As his touch locations map shows, Fernandes is averaging as many as 9.8 touches more per 90 minutes on the left flank under Rangnick than he was with Solskjaer this season. While his touch frequency through the middle hasn’t changed massively, his numbers are down slightly except for in the zone just past the halfway line, where they have increased.

The passes he is receiving also tell a very similar story. He’s picking the ball up deeper and wider than under Solskjaer.

Perhaps, then, it should come as no surprise that Fernandes is having fewer shots (1.9, down from 2.5) and creating fewer chances (2.4, down from 3.1) under Rangnick than he was for Solskjaer, but here is every chance this is deliberate.

Rangnick may have felt Fernandes wasn’t having enough influence in United’s general play, with his touches per 90 minutes averaging at 69.1 this season under Solskjaer and Michael Carrick. That was well below his average pre-2021-22 (81.8) but it has since been boosted to 78.7.

Similarly, Fernandes – perhaps owing to operating more in less congested areas of the pitch – is playing 10.4 passes into the box on average every 90 minutes, which is 2.6 more than before.

Again, this may be a deliberate ploy to try to make the most of Fernandes’ passing range, but it could also be argued this is where he’s at odds with the new role and system. With his xA slipping to 0.19 per 90 for Rangnick, those extra passes into the box aren’t – seemingly – hugely reliable in terms of good chance creation, meaning they are likely more hopeful than expectant.

Given Rangnick’s desire for “control”, one would think he’d want fewer hopeful deliveries into the box, favouring a more careful approach to attacking, but this could feasibly be put down to Fernandes still requiring time to adapt to a new function, which would be reasonable.

What’s clear is the fact Fernandes’ two-year anniversary arrives at a time when he’s personally going through probably the most testing period of his United career, with the spotlight being shone directly on his contributions amid the wider narrative of team’s general woes.

Maybe his levels have dropped slightly, but that’s a common theme across this United squad. Either way, he’s still proving effective, and it remains difficult to imagine them being a better attacking unit without him.