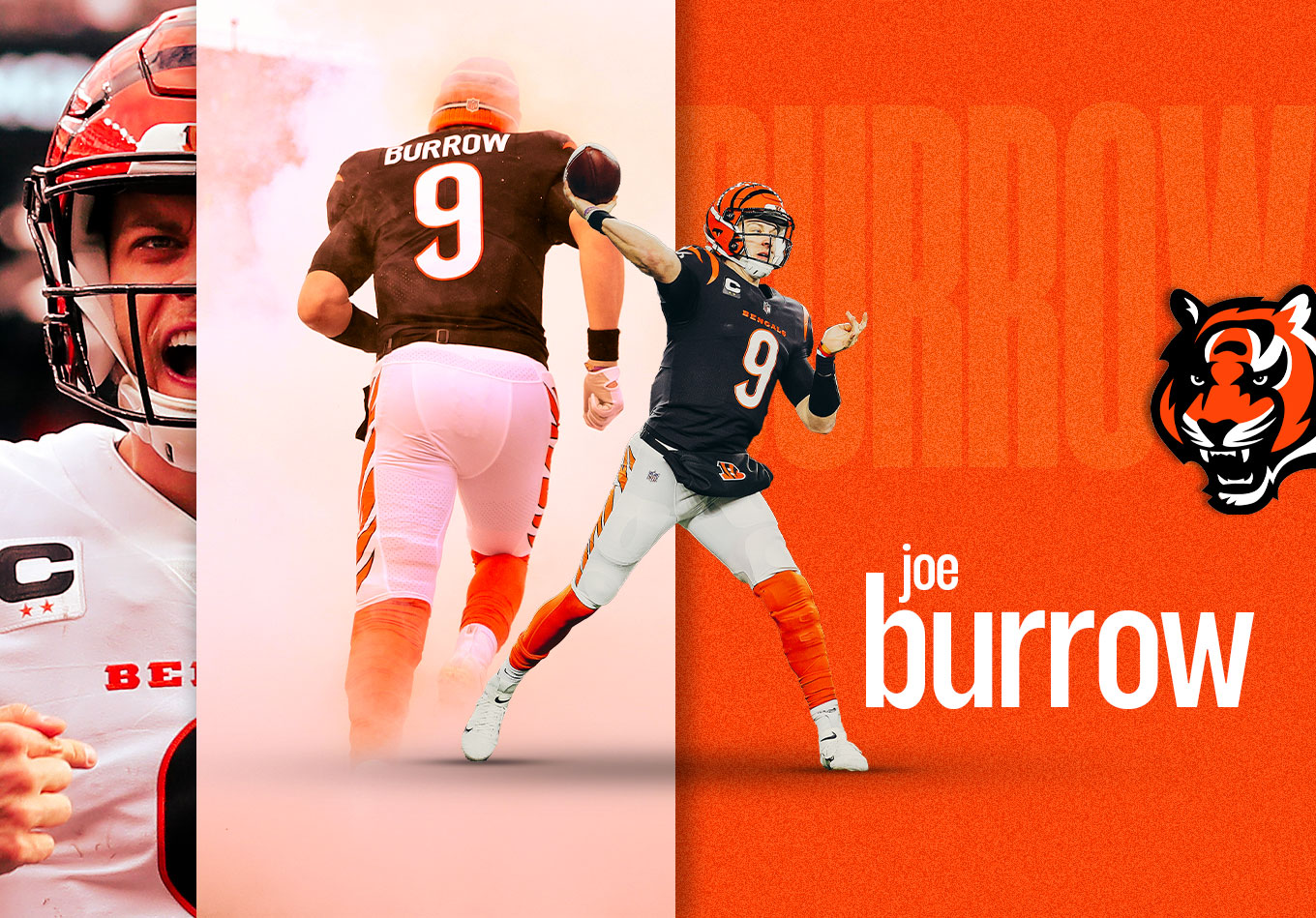 How Joe Burrow Is Winning Without the ‘Big Arm’ Label

Even without the desired arm talent in today’s NFL, Cincinnati’s young star quarterback has the Bengals on the brink of greatness.

Quarterback dialogue is all about who has the big arm, who can throw from a multitude of arm slots, and who makes the sexy play deep down the field and outside of the pocket. It’s why Patrick Mahomes, Josh Allen, and Justin Herbert dominate the highlight reels (and rightfully so.)

And yet, the quarterback taking over the storyline in Los Angeles is doing it without the rocket launcher that is desired in today’s NFL. As we approach Super Bowl Sunday, we have to understand just how Joe Burrow has gotten a bottom dweller to the promised land in just one year.

It begins with an element of “fake it until you make it.”

The Bengals failed to make much of an upgrade to their offensive line, drafting a non-factor in Jackson Carman in the second round of the 2021 NFL Draft. They have shuffled out right guard after right guard even in the playoffs, and Burrow led the league in sacks this season.

And despite the continued lack of protection around him, Burrow remains as poised and confident as ever. There is not a quarterback with more moxie and swagger in the NFL than Burrow as he continues to solidify himself as the face of the Queen City.

As we become fascinated with the tools of a quarterback, and it is warranted to an extent, we also tend to forget about the other elements of the quarterback position. There is a fixation on finding the next Josh Allen, but Burrow thrives because he can routinely get his eyes where they need to go and get the ball out of his hand on time and on schedule when his protection allows.

For over two decades Tom Brady has dominated the NFL despite his lack of mobility or ability to operate outside of structure. He did so because he thrived at executing both pre and post-snap, getting his speedy eyes where they need to be, and delivering the football on time to his intended targets.

While it’s the opposite for Burrow where he has the mobility, but lacks the arm, the sentiment about his eyes and anticipation remains true.

Even when throwing deep, Burrow does not need the big arm to anticipate where his receiver will be and where he will have room to fit the football in. Despite the lack of top-tier arm talent, Burrow still managed to finish in the top 10 in air yards this season. The arm matters, but so do the eyes and timing.

His ability to improvise certainly helps as well.

While Burrow does not have elite arm strength, or even above average arm strength, the level of athleticism in his lower half allows him to compensate for the lack of a pocket around him. As evidenced in the AFC championship game, Burrow’s athleticism led to clutch play after clutch play despite having Chris Jones and company constantly in his face.

Going back to his Heisman Trophy-winning and national championship season at LSU, Burrow has proven to be a wizard outside of the pocket and when structure breaks down around him. He just has the uncanny ability to wiggle himself out of inopportune situations, a trait that will need to show up on Sunday as his subpar offensive line takes on Aaron Donald, Von Miller and Leonard Floyd on Sunday.

Including the playoffs, Burrow is the only QB with both a well-thrown percentage (80.9) above 80.0 and an average air yards per attempt (7.68) above 7.0 while either moving or scrambling.

The big arm does not matter much if a quarterback and his receivers can work the scramble drill and make defensive backs work well after the three-second mark they are typically asked to play within. Burrow continuously pushes secondaries to their limits as he makes them work past their limits as he remains a threat well after his protection gives in.

It certainly helps to have a wide receiver room as Burrow has around him, with newly named NFL Offensive Rookie of the Year Ja’Marr Chase, second-year dependable target Tee Higgins, and one of the best slot receivers in the league in Tyler Boyd as the primary options. But make no mistake, Burrow is elevating the play of those around him.

Just look at tight end C.J. Uzomah, who could play Sunday despite spraining his MCL in the AFC championship game. Before Burrow’s arrival, Uzomah had just one season of over 300 yards receiving and never cracked five touchdowns in a season. This year, Uzomah has reached new heights across the board as he has set new career highs in receptions, yards and touchdowns with Burrow throwing him the football.

Sure, Burrow has weapons. However, his accuracy is just another trait that allows him and those around him to thrive without possessing the arm talent of the other top quarterbacks in the league. It should not come as a surprise to hear that Burrow led the league this season in well-thrown percentage in addition to completion percentage.

Burrow then paired that accuracy with the ability to take care of the football down the stretch, throwing just three of his 14 interceptions over the last seven games of the regular season (and two in the postseason thus far). He was second only to Aaron Rodgers (0.51) with a 2.50 pickable pass percentage over that seven-game stretch.

Playmakers cannot make plays without getting the ball in their hands, and Burrow does just that. He gives his guys a chance to make a play. Two receivers over 1,000 yards and a third less than 200 yards away, this level of production would not have happened with Andy Dalton under center no matter the targets.

Even with an underwhelming play-caller and a bottom-tier offensive line, Joe Cool continues to defy odds. And now, with ice in his veins, he’s just one game away from pulling a team that has no business playing in the Super Bowl to eating free Skyline Chili for life.