He Gone: The Most Strikeouts in a Game and Season in MLB History | The Analyst 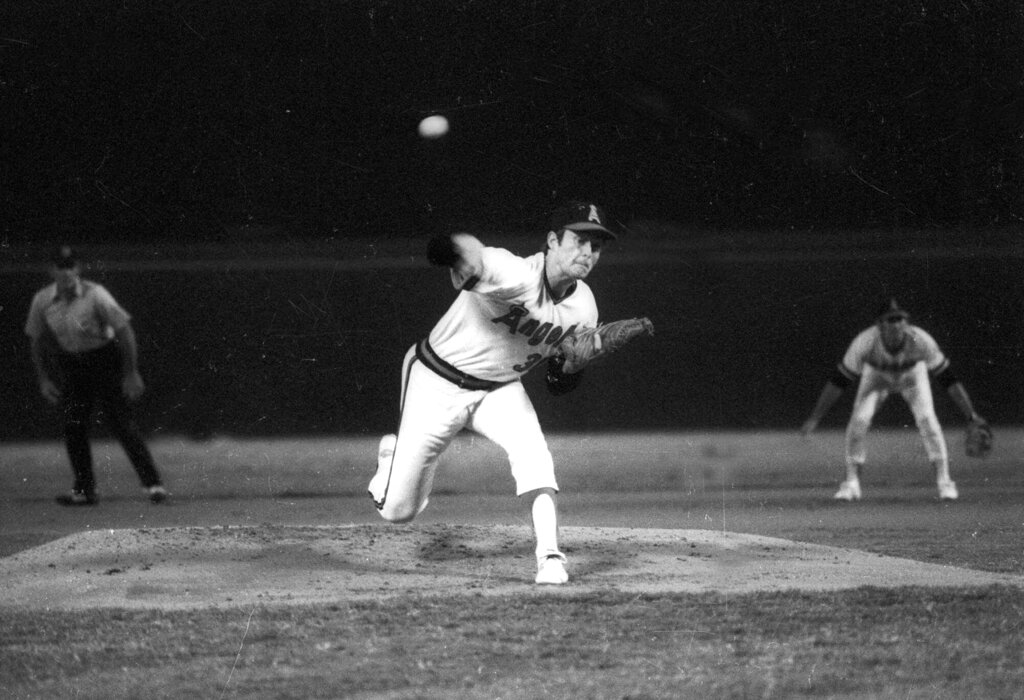 He Gone: The Most Strikeouts in a Game and Season in MLB History

Have you ever watched these guys and asked yourself who recorded the most strikeouts in a major league game and season?

Well, we’ve delved into the history books to bring you the all-time single-season and single-game leaders in our latest countdown.

Most Strikeouts in a Single Season (All Time)

Strap yourself in for some 1880’s baseball history! And with good reason, as back in 1886, pitchers did not have to contend with the mound, finding themselves pitching from a flat rectangle just 50 feet away from home plate. And modern-day batters complain about play favoring the pitcher. They don’t know how good they’ve got it.

Matt Kilroy, a 19-year-old rookie, took advantage by registering a monumental 513 strikeouts and probably giving old blue a bit of arm ache in the process. The left-hander recorded this feat in 583 innings of work and even found the time to record 182 walks, a fact even more staggering with the knowledge that six balls were required for a pass in 1886.

Most remarkably, all these strikeouts didn’t result in the Orioles having a winning season. They finished at the bottom of the American Association with Kilroy registering a league-leading 34 losses to his 29 wins. So perhaps some things in baseball don’t actually change that much over time.

A fellow left-hander in the same season managed to do slightly better in the win-loss column, but Toad Ramsey’s 499 strikeouts still only led to a 38-27 record for Louisville, with the so-called godfather of the knuckleball seeing his Colonels winning just 66 games overall.

A lot of his success was apparently due to his ability to lay off the bottle. It was said the 1886 season was the year he drank the least, with a contract explaining how much he could and could not drink being key. The lack of such temperance in the following years saw performances, and his temper, fall away before departing the majors in 1870.

The dominance of pitchers during the 1886 season led to more changes to the rules, including switching to four strikes for a strikeout and removing the batters ability to call for a high or low pitch, probably meaning the likelihood of these records being broken are slim to none. Kilroy did manage to record 355 strikeouts in the 1887 – best for 15th on the list – as Ramsey tumbled down to 217 but saw his effectiveness increase, recording 46 wins. That’s still the single-season record for a left handed pitcher.

Prior to Kilroy and Ramsey, the single-season strikeout record was held by a pitcher who played for two different clubs during 1884 and was even released with a month of the season to play. But that doesn’t get near to telling the story of Hugh Daily.

A shooting accident through his left wrist at the age of 13 earned Daily the nickname ‘One Arm’ and seemingly with it a volatile temper which incurred the wrath of baseball officials, umpires and teammates (with Daily famously once punching his own catcher who he deemed to be returning the ball to him too hard) but delighted fans of the clubs he played for.

It would take ‘One Arm’ until age 34 to break into the league, but three years later would come his greatest achievement as he overpowered the Union Association’s lack of talent for the Chicago Browns, Pittsburgh Stogies and Washington Nationals during the league’s only season of play. He racked up 483 strikeouts, while also recording 19 strikeouts in a single game.

In fact, 1884 proved to be a real boon for pitchers across the nation with the next four pitchers on the list all achieving their single-season record in the same year.

Most Strikeouts in a Single Season (Since 1900)

The nearest a pitcher has come to the single-season record in the modern era came courtesy of Nolan Ryan’s incredible run in the 1973 campaign for the California Angels.

Coming off the strike-shortened 1972 campaign, Ryan’s ability as a workhorse was already known and with the Angels slipping out of contention. But with a chance to grab a piece of history, the Texan needed 57 strikeouts over his final five starts to do so in a campaign which had featured a couple of no-hitters.

It looked like Ryan would end up tied with Sandy Koufax after recording three outs in the ninth inning of his final start against the Minnesota Twins without a strikeout, but a scoreless home half and then 10th inning for both eventually allowed him to strike out Rich Reese and set his final mark for the season at 383.

It has been argued that Ryan would have struck out even more if he had been pitching in the National League, rather than the American which had introduced designated hitters that very season. Instead, the Texan will have to just make do with owning the modern-era record.

The youngest player ever to be elected to the Hall of Fame, Sandy Koufax would retire just a season after setting the previous best marker in the modern era. But at one point, even recording one of his 382 strikeout in 1965 looked in jeopardy.

Waking after a spring training start, Koufax found his arm black-and-blue with warnings from doctors he would only be able to pitch once a week. The Los Angeles Dodgers star turned to pain medication and eventually threw a league-leading 335.2 innings in taking the team to another pennant. He won a second unanimous Cy Young Award.

Fourteen of those strikeouts came on Sept. 9 when he became the sixth pitcher of the modern era, and eighth overall, to throw a perfect game. It was the fourth no-hitter of Koufax’s big-league career. Koufax and opposing pitcher Bob Hendley of the Chicago Cubs carried no-hitters into the seventh with the only run of the game coming when Dodgers Lou Johnson walked, reached second on a sacrifice, stole third, and then scored on a throwing error by Cubs catcher Chris Krug in the fifth.

Koufax’s record of 14 strikeouts in a perfect game was matched by Matt Cain of the San Francisco Giants in 2012, although the Dodger was able to strikeout an opponent in each inning while Cain fell short in the ninth.

When it comes to the current century we’re all living in, it’s Randy Johnson who has recorded the best single-season strikeout total with 372.

Yes, it’s hard to believe that even in a season when the Arizona Diamondbacks would go on to win the World Series and Johnson would prove himself to be lights-out on the mound, perhaps the moment he still must talk about most from the 2001 season came in spring training.

Thankfully for Johnson, we won’t dwell too much further on that here but will use this space to show how the game has evolved from when Kilroy ruled the diamond.

That’s right, 37.4% of batters that Randy Johnson faced in the 2001 season were set down on strikes. This included a game against the Cincinnati Reds in which he came the third pitcher, and first left-hander, to record 20 strikeouts over nine innings (see below).

It’s a game that has been somewhat lost in the annuals of history when compared to Kerry Wood’s effort for the Chicago Cubs in 1998, mainly because the game would go to extra innings with Johnson having turned things over to the bullpen. But 18 of his 20 strikeouts came on swinging strikes – with 36 of his 124 pitches also going the same way – a 29% swing and miss rate.

Oh how that bird wishes he missed them in spring training though.

The closest since to Randy Johnson’s effort in 2001? Well that would be Randy Johnson in 2002 when he recorded 334 strikeouts – tied for 30th on the list. But apart from the Big Unit, the most strikeouts in a single season came back in 2019 when Gerrit Cole was suiting up for the Houston Astros.

His 326 strikeouts wouldn’t be enough to win Cy Young honors (that going to Astros teammate Justin Verlander), but would be enough to earn a $324 million, nine-year contract with the New York Yankees. He also set a variety of major league records during the season, including becoming the first pitcher to go through nine consecutive starts striking out at least 10 batters in each outing.

Now it just leaves us to wonder what the likes of Matt Kilroy, Toad Ramsey and ‘One Arm’ Daily would be earning in the modern game.

Most Strikeouts in a Single Game (All Time)

Now here’s a look at those who have reached the celebrated 20-K mark in a single game. It’s something only the Rocket has done twice in baseball history.

Most Strikeouts in a Postseason Game (All Time)