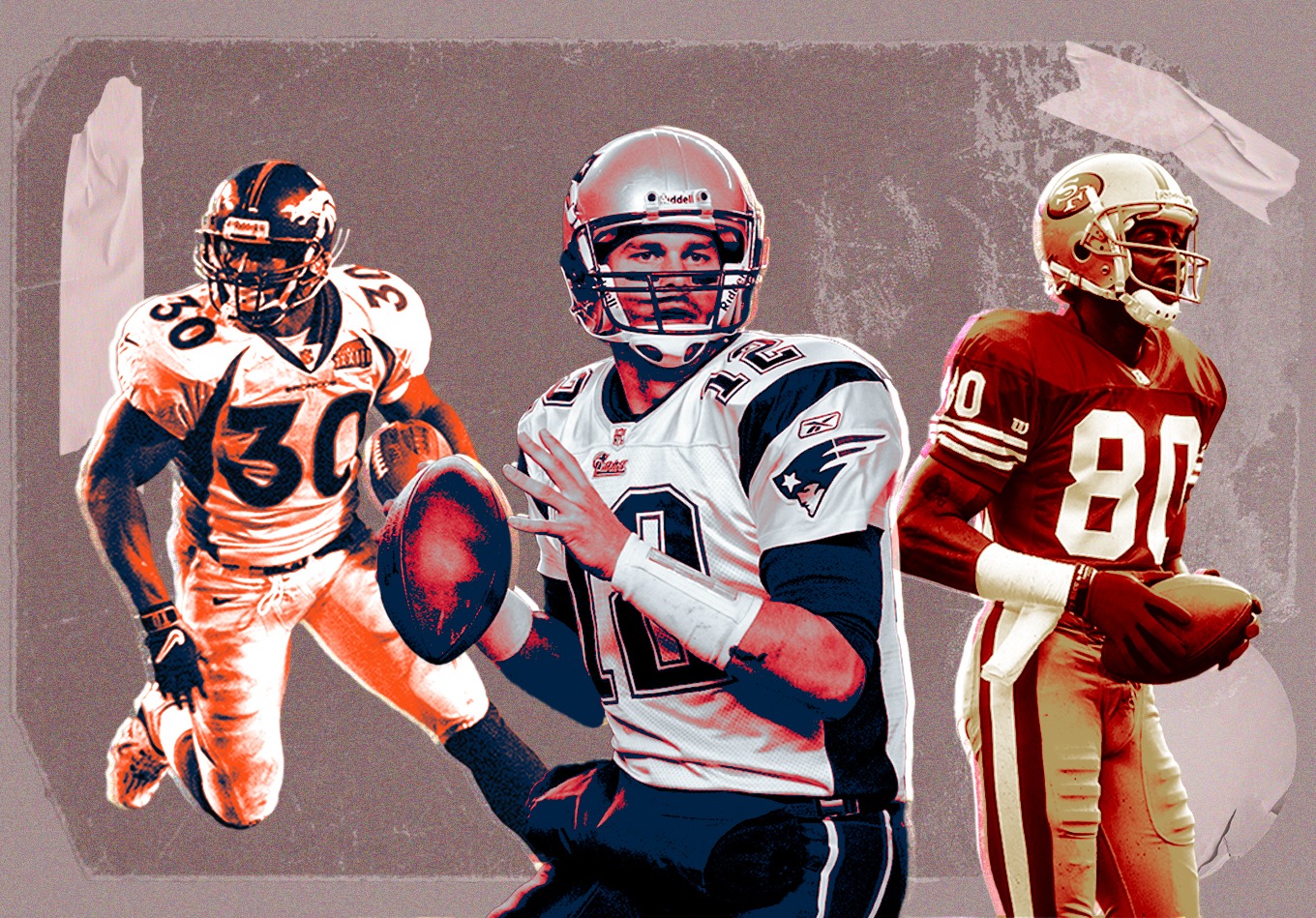 Dexter Jackson of the Tampa Bay Buccaneers. Deion Branch of the New England Patriots. Santonio Holmes of the Pittsburgh Steelers.

These are names that, if you know of them, it’s not because they are pro football Hall of Fame-level players.

No, it was because they’ve had performances under the brightest of lights that have etched their names into NFL’s annals for good.

One good game or one shining moment while the whole country is watching is all it takes for immortality.

That makes us wonder about who has had the best – and in some cases, the worst – statistical performances in Super Bowl history.

Most Passing Yards: Tom Brady with 505 in Super Bowl LII

It’s not surprising that the only quarterback to throw for 500 yards on Super Sunday is Tom Brady of the Patriots, but it’s a little surprising that it came in one of the Super Bowl appearances in which he lost.

Brady was sensational against the Eagles in 2018, throwing for 505 yards with three touchdowns and no interceptions, but it wasn’t enough as Nick Foles, who had the fifth-most passing yards in a Super Bowl with 373, got the last laugh. Brady had 28 completions in 48 attempts and finished with a 115.4 passer rating.

Getting back to Brady. For one day, Foles was good enough to beat the future Hall of Famer, who was left with the passing record as a consolation prize (and, you know, his seven Super Bowl wins in other years).

It’s not fair that some franchises have been waiting for an elite quarterback for decades, and the 49ers had Joe Montana and Steve Young. They’re the only players to throw for five or more touchdowns in the Super Bowl – back-to-back.

Montana dominated John Elway’s Denver Broncos in a 55-10 drubbing in Super Bowl XXIV in 1990 that remains the largest margin of victory in the Super Bowl history. He only threw for 297 yards, but he wasn’t needed much late as the 49ers ran in their two touchdowns in the fourth quarter. Elway had a miserable day, throwing for 108 yards and two interceptions on 26 attempts. It was the second consecutive and fourth overall title for Montana.

Young decided to outdo his predecessor by throwing for six touchdowns in a 49-26 win over the San Diego Chargers in Super Bowl XXIX in 1995.

Rich Gannon threw only 10 interceptions on 618 pass attempts in the 2002 regular season, earning him MVP honors.

He threw half that many in Super Bowl XXXVII. Gannon threw five interceptions, three of which were returned for touchdowns. He was also sacked five times as the Buccaneers handled the Raiders 48-21.

The Bucs defense was incredibly talented with Warren Sapp and Simeon Rice lining up on the same side of the line, NFL Defensive Player of the Year Derrick Brooks at linebacker and a secondary that included safety John Lynch and Super Bowl MVP Dexter Jackson. And that team made Gannon’s life miserable all night, leaving him with a record he’d rather not have.

Most Rushing Yards: Timmy Smith with 204 in Super Bowl XXII

Smith had 602 rushing yards in the regular season over his entire career. But he had a whopping 204 against the Broncos in a 42-10 rout in Super Bowl XXII.

Denver scored the first 10 points of the game before Washington ripped of 35 in the second quarter to all but wrap the game up by halftime. Smith was a big part of that with a 58-yard touchdown, and he added the cherry on top in the fourth quarter with a 4-yard TD.

As the number of bell-cow running backs and running plays, in general, have decreased, it’s getting harder and harder to see anyone breaking Smith’s record. In fact, only Frank Gore of the San Francisco 49ers, Damien Williams of the Kansas City Chiefs and Marshawn Lynch of the Seattle Seahawks have rushed for more than 100 yards in the Super Bowl since 2010.

After some one-sided losses in the Super Bowl earlier in his career, John Elway and the Broncos finally broke through and won the first of consecutive Super Bowl victories with a 31-24 win over the Green Bay Packers in 1998.

But it wasn’t Elway who led the way offensively. Davis carried the load with 30 carries for 157 yards and became the only player with three rushing touchdowns in a Super Bowl.

All three of Davis’ scores were from 1-yard out, capping big drives in a game that was tight the whole time. He scored in the first quarter to tie the game, then gave the Broncos the lead twice in the second half. He plunged in what would be the winning TD with 1:47 left, giving Denver a 31-24 lead.

Fourteen other players have scored two rushing touchdowns in the Super Bowl, the most recent being James White (more on him next) in 2017.

Most Receptions: James White with 14 in Super Bowl LI

Speaking of White, no player has had as many receptions in the Super Bowl as he did. I guess it helps to be the outlet for Tom Brady when he’s making a historic comeback.

While two of his three touchdowns came on the ground, White was a huge factor through the air as he caught 14 of his 16 targets for 110 yards. He scored the first touchdown of the game for the Patriots in the third quarter, sparking the comeback from a 28-3 deficit. Then, after helping lead the Pats down the field on several drives with catches out of the backfield, White got handoffs for the game-tying touchdown with under a minute left in the fourth quarter, and the game-winning score in overtime.

In terms of wide receivers, Demaryius Thomas of the Denver Broncos has the most receptions with 13 in 2014, as he did his best in being a one-man show against the vicious Seattle Seahawks defense in a 43-8 loss. Thomas had 13 of the Broncos’ 34 receptions that day for 118 yards, including the team’s only TD.

Most Receiving Yards: Jerry Rice with 215 in Super Bowl XXIII

In Super Bowl XXII, it wasn’t just Timmy Smith that broke a record for Washington. Sanders had 32 more receiving yards than anyone had in Super Bowl history. But his record lasted all of one year before the greatest wide receiver of all time broke it.

It was the last time the Cincinnati Bengals were in the Super Bowl before 2022, and the game didn’t seem to follow the script of one that would have any offensive records broken, especially at halftime when it was 3-3. The Bengals took a 13-6 lead on the NFC champion 49ers in the third quarter with a kick return for a touchdown before Jerry Rice scored the first offensive TD of the game for either team to tie it. In the fourth quarter, the Bengals took a 16-13 lead before the 49ers scored with 34 seconds left on a pass from Joe Montana to John Taylor. Rice had three catches for 51 yards on that game-winning drive.

Montana locked into Rice and running back Roger Craig to pull out the victory, as the two combined for 19 of San Francisco’s 23 catches that day. And Rice was far from done with dominating Super Bowl performances.

Most Receiving Touchdowns: Jerry Rice with Three in Super Bowls XXIV and XXIX

There have been 17 instances when a player has had multiple touchdown receptions in the Super Bowl, but Rice is the only one with three – and he’s done it twice.

Amazingly, due to the monster quarterback games, Rice didn’t win Super Bowl MVPs in either game, settling for the one he got in 1989 when he set the yardage record.

Ron Jaworski must see Rod Martin in his nightmares.

The Eagles quarterback was intercepted three times, all by Martin, in a 27-10 loss to the AFC champion Oakland Raiders in Super Bowl XV. Martin had just two picks the entire regular season, but the linebacker became the only player in NFL history with three in the Super Bowl.

There have been 11 other instances of two interceptions, most notably when Dwight Smith of the Tampa Bay Buccaneers returned both his picks against the Raiders for touchdowns in 2003.

Three of the four instances of a player having three sacks in the Super Bowl came in losing efforts.

Darnell Dockett did it for the Arizona Cardinals in a 27-23 loss to the Pittsburgh Steelers in Super Bowl XLIII in 2009. Kony Ealy had three sacks and an interception of Peyton Manning in Super Bowl 50 in 2016, but the Carolina Panthers offense stalled and the Denver Broncos won 24-10. And Grady Jarrett got to Tom Brady three times before the Atlanta Falcons blew a 28-3 lead to the New England Patriots in Super Bowl LI in 2017.

The only three-sack player on the winning team was Reggie White, who sacked Drew Bledsoe three times in the Green Bay Packers 35-21 win over the New England Patriots in Super Bowl XXXI in 1997.

The Minister of Defense failed to hit double-digit sacks for only the second time in his career that season, but he more than made up for it in the Super Bowl.