Not All Walk-off Home Runs Are Created Equal | The Analyst 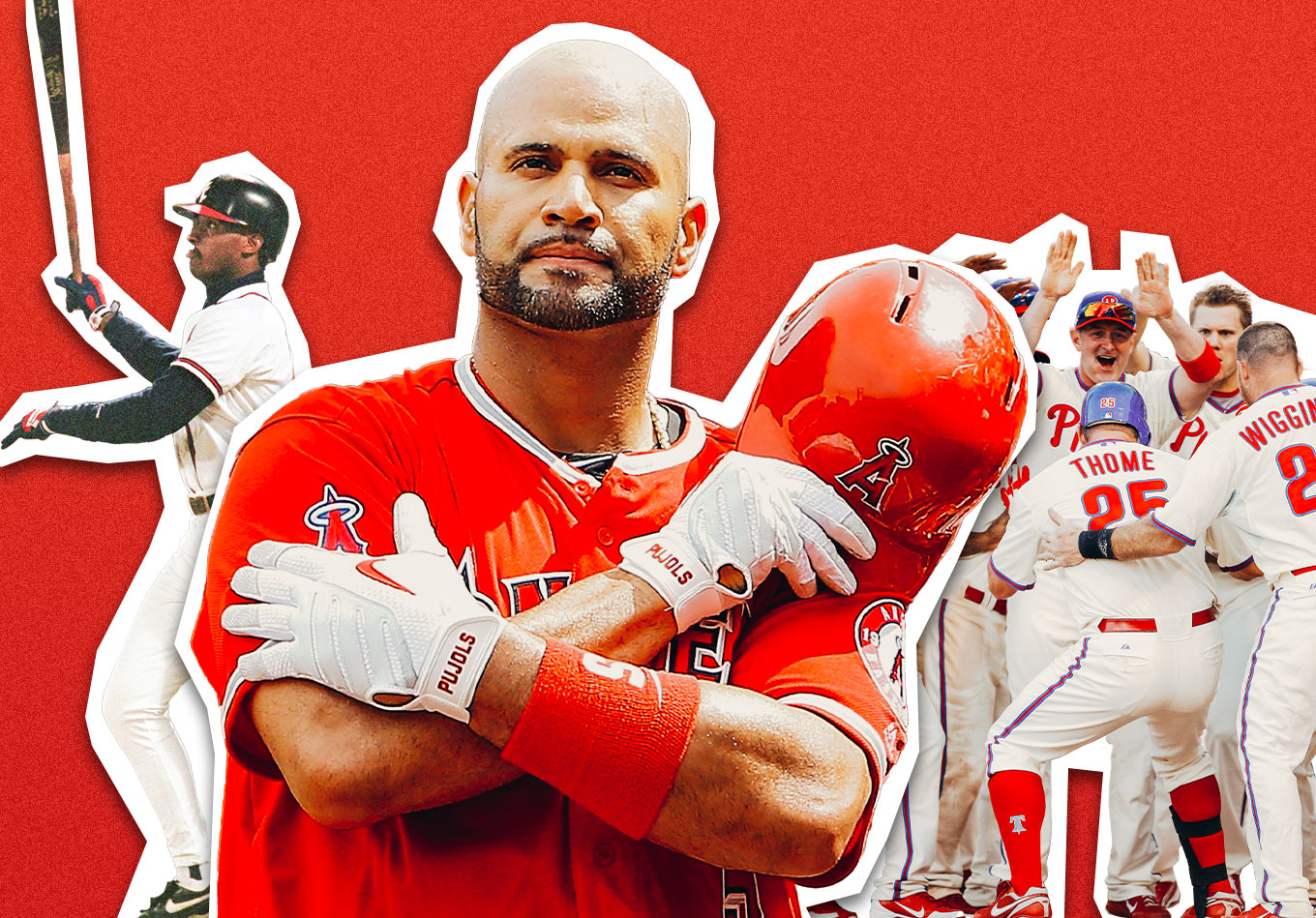 Not All Walk-off Home Runs Are Created Equal

The game’s most exciting play has thrilled us in a variety of ways. We’re taking a historical look at most of them and discovering which walk-off kings have a shot at the all-time record, who holds the single-season mark, who has done it most when trailing, and more.

The walk-off hit is one of the most unforgettable, moving moments in baseball.

Some of history’s greatest walk-offs are likely coming to mind, like Bobby Thomson’s “Shot Heard ‘Round the World” in Game 3 of the 1951 NL playoffs, Bill Mazeroski’s homer in Game 7 of the ’60 World Series, Carlton Fisk waving on his shot in Game 6 of the ’75 Series, Kirk Gibson limping around after his improbable homer in Game 1 of the ’88 Series and Joe Carter leaping after his walk-off in Game 6 of the ’93 Series – just to name a few.

So we’re celebrating the walk-off dinger by unveiling the game’s all-time walk-off kings in various scenarios.

First, let’s start by taking a look at the players who have come through when the tension has been at its peak. Some call these ultimate grand slams, others refer to them as super slams. It could be argued these are the most dramatic walk-offs of all:

Big Dan Vogelbach has the most recent one, crushing a one-out pitch in the bottom of the ninth as the Milwaukee Brewers rallied with five in the ninth to stun the St. Louis Cardinals. Three players lead the way with three career walk-off grand slams of any kind: Alex Rodriguez (1994-2016), Vern Stephens (1941-1955) and Cy Williams (1912-1930).

Since 1988, Dante Bichette, Brian Jordan, David Ortiz and Charlie Blackmon are the only players with multiple two-strike, two-out, walk-off home runs with their teams trailing.

Maybe the situation isn’t quite as tenuous as being down three runs in the final inning, but here are the players who have supplied the most walk-offs with their team simply behind:

Ryan Zimmerman – known as Mr. Walk-off or Mr. National – has announced his retirement. But he’s joined some Hall of Fame company with Babe Ruth and Frank Robinson, who is also tied for most extra-inning walk-off home runs of all time. And some believe Fred McGriff should be a Hall of Famer given his resume.

Seven of McGriff’s 493 career homers came in extra innings. In an extra-inning affair when one swing can end it, these are the guys that teammates have wanted at the plate – and the ones the opposition has feared:

We’ll see more of Robinson and Jim Thome later. Perhaps Albert Pujols’ most famous homer was a three-run rocket off Brad Lidge with two outs in the ninth inning of Game 5 of the 2005 NLCS. But it came in the top of the inning and Jason Isringhausen still had to close out a 5-4 win at Houston.

Pujols has made a couple of our leaderboards, including a place among the latest walk-off home runs ever hit. His came in the bottom of the 19th against the Boston Red Sox on Aug. 9, 2014.

Pujols also pulled off a rare feat in June 2011 when he walked off the rival Chicago Cubs on consecutive days – both in extra innings:

Pujols’ back-to-back walk-off performances against the Cubs had been the most recent until Jonah Heim ended the 10-year drought by breaking the Seattle Mariners’ hearts two days in a row.

Both of Albert Belle’s winners against the Toronto Blue Jays came in extra innings and were part of Cleveland’s magical run to its first World Series appearance since 1954. Note that this is walk-offs on consecutive days, not in consecutive games as there are others who did so with an off day in between. This also includes players who played another game in between as part of a doubleheader.

As mentioned earlier, Pujols sent sleepy Los Angeles Angels fans home happy with a walk-off shot off Brandon Workman in the 19th inning of a 5-4 win over the Boston Red Sox on Aug. 9, 2014. But it’s not nearly the latest walk-off in baseball history – that honor goes to Hall of Famer Harold Baines:

Baines’ blast mercifully ended the longest game in Major League Baseball history as the Chicago White Sox outlasted the Brewers 7-6 in 25 innings and over eight hours, six minutes, on May 8, 1984.

In case you’re wondering, the latest walk-off homer in postseason history came in the 18th inning. The Los Angeles Dodgers’ Max Muncy did it against the Red Sox in Game 3 of the 2018 World Series and the Houston Astros’ Chris Burke clinched a series win over the Atlanta Braves in Game 4 of the 2005 NLDS.

Speaking of Burke’s blast, here are the homers that sent a team through to the next round or won them a ring:

There are only three players in baseball history with multiple walk-off homers in the postseason: David Ortiz, Bernie Williams and Carlos Correa. And one of Ortiz’s shots took out the Anaheim Angels in the 2004 ALDS.

Joe Carter’s iconic home run in 1993 remains the most recent to end a World Series. There have been 16 walk-off dingers in the Fall Classic, with the previously mentioned Muncy homer being the most recent. It was the only game the Dodgers won against the Red Sox in the series.

Texas Rangers slugger Nelson Cruz’s bomb against the Detroit Tigers in Game 2 of the 2011 ALCS was the only walk-off grand slam in postseason history.

Carlos Guillen, like Cruz a former Mariner, delivered a walk-off single that closed out a sweep of the White Sox in Game 3 of the 2000 ALDS and hit for the cycle six years later as a member of the Tigers.

Some players have achieved the impressive individual feat by slugging a walk-off homer:

George Brett had a walk-off dinger and hit for the cycle against the Baltimore Orioles on May 28, 1979, but the walk-off was his second homer of the game and he had already reached the cycle earlier.

Hitting for the cycle certainly isn’t the only important personal feat that’s been achieved while walking an opponent off. Thome’s shot in 2007 might be the best milestone homer reached on a walk-off:

There have been 107 occasions on which a player’s first career homer was a walk-off. Yadiel Hernandez did this for the Washington Nationals against the Philadelphia Phillies on Sept. 22, 2020, while the Phils’ Luke Williams had the most recent one versus the Braves on June 9, 2021.

Three players have belted walk-off grand slams for their first career home runs: Rick Joseph of the Phillies in 1967, Danny Kravitz of the Pittsburgh Pirates in 1956 and Al Unser of the Tigers in 1944.

Foxx hit a total of 534 home runs during his Hall of Fame career and Sievers smashed 318. Ethier only hit 162 over his 12 seasons with the Dodgers, but he went deep a career-high 31 times in 2009 and joined a club that had only Foxx and Sievers for 52 years.

His heroics earned him the nickname “Captain Clutch” from Dodgers fans. Ethier led the majors with six walk-off hits overall that year, including back-to-back winners against the Phillies in June.

That leads us to the ultimate list, the who’s who of walk-off home runs in baseball history. These are the offensive closers, the ones pitchers have feared late in close games, and those who have made careers out of changing the outcomes.

As expected, there are plenty of the game’s biggest names. But there are also some surprises:

Thome’s record 13th walk-off homer was his only one as a pinch-hitter and came 18 years after his first one with Cleveland in June 1994. He belted the first walk-off home run at Target Field in 2010, crushed a walk-off grand slam against the Tigers in 2002 and ended a win over the Angels with his 500th career home run in 2007.

Who has a chance to catch him? Pujols, who may have another year in him, figures to have the best opportunity to get there first as he tops all active players with 12 career walk-off homers.