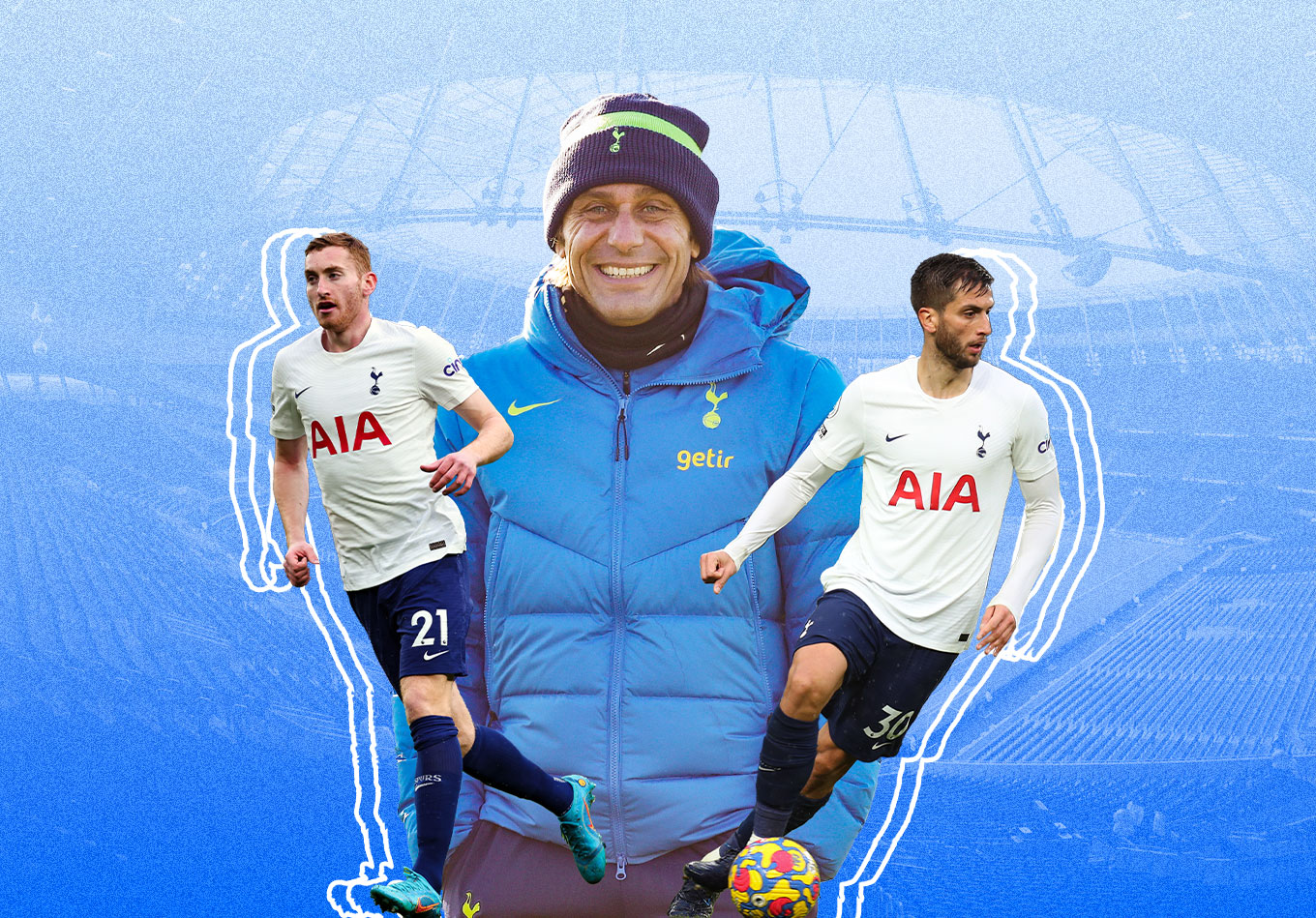 It was a transfer window all too familiar for Tottenham fans. Reports in the media linked Antonio Conte’s side to players around the globe, from Diego Carlos to Adama Traoré to Luis Díaz. In typical Spurs fashion though, everything pointed to them heading out of the window empty-handed.

That was until the last 12 hours of the window. Spurs were the busiest Premier League club on Deadline Day with six deals completed, revamping their central midfield options. Uruguayan midfielder Rodrigo Bentancur was the first of two players to join the north London side from Juventus, but a midfield exodus on the same day saw moves away from the Tottenham Hotspur Stadium for Tanguy Ndombele, Giovani Lo Celso and Dele Alli.

“For sure it was strange to send out on loan four players and one transfer in January. You have to buy players to reinforce your team but if you send away players you bought in the last two or three years it means you did something wrong in the past.”

It could be argued that Spurs have strengthened their first-team options by signing a player who has already staked his claim in the team, while letting go of three players who have only made a combined three starts since Conte took the reins back in November. On the other hand, Conte does have a point. Spurs have fewer options, and less room for manipulating the starting eleven as the new manager continues searching for his best system. Take Tottenham’s 2-2 draw with Liverpool in December, for example. Dele Alli played a crucial tactical role in occupying the half-space on the left to keep Trent Alexander-Arnold pinned back as much as possible. He doesn’t have that option anymore, and the onus of making these changes worthwhile ultimately falls on the new signings.

More of the Same Defensive Acumen

Antonio Conte needs ball-winners in his midfield. It’s crucial that he doesn’t lose the defensive abilities in his midfield with the personnel changes he made. Conte’s had some of the best ball-winners of the last decade at his disposal, including N’Golo Kanté in his Premier League title-winning season at Chelsea. Juventus were keen to point out Bentancur’s ball-winning abilities when they announced the sale of the player last month. The Boca Juniors academy product completed more tackles (205) and interceptions (147) than any other Bianconeri player during his time in Turin.

But how do these numbers compare to Tottenham’s pre-existing midfield options? With 2.5 tackles and 2.0 interceptions per 90 since the beginning of the 2020-21 season, Bentancur stands out as the most prolific ball-winner Spurs currently have at their disposal. Danish midfielder Pierre-Emile Højbjerg has his nose out in front for recoveries (8.1 per 90), but the new signing also comes out ahead on duels won with 5.7 per 90.

We have seen Conte’s side look to implement a high press at times this season, admittedly with varying success. Bentancur is an astute signing for a team that needs to improve in that area, having won the ball back in the attacking third more times than Højbjerg, OIiver Skipp and Harry Winks combined despite playing over 2,500 minutes fewer. The Uruguayan has done so 20 times, with his new team-mates combining for a total of 18.

It is worth noting that Højbjerg dominates with possession won in the midfield third. His 91 is more than double that of Bentancur and Skipp, who both have 41. This won’t be a concern for the former Juve midfielder though, as over 20% of his possessions won come in the final third.

It’s safe to say Conte won’t be losing anything in terms of winning the ball back if Bentancur is to announce himself as a regular starter in this Spurs team. However, Conte’s midfield has been crying out for one thing all season: creativity, a spark, someone with the ability to change the game with their eye for a pass. Is Bentancur that man?

The numbers are favourable for Tottenham fans. While we won’t claim his numbers come anywhere close to the best playmakers in world football, Bentancur has some very impressive attacking and progression statistics for the balanced midfield player that he is.

Among the four midfielders below, Bentancur’s averages rank just third in progressive passes, and second in successful passes in the opposition half.

He is in a league of his own, however, when it comes to how effective his involvement in the game is. As we saw with his possession won statistics, Bentancur prefers to operate higher up the pitch. 58.1% of his successful passes come in the opposition half, again more than the other three. He is also more efficient than his colleagues for initiating sequences that lead to shots for his side, both in terms of winning the ball back and starting passing sequences.

He is also involved in more sequences of play (without initiating them himself) that lead to shots, with more secondary chances created too.

The Uruguayan is effective on the ball, something that he proved at Juventus, despite the world-class talent surrounding him during his time in Italy. Bentancur had the third most attacking sequence involvements for Juventus in the Serie A last season. He is far behind runaway leader Cristiano Ronaldo, but only eight behind Danilo in second. He was more involved than the likes of Dejan Kulusevski, Alvaro Morata and Paulo Dybala.

This trend continues with Bentancur’s ball carrying statistics. The 24-year-old ranks comparatively low for overall progressive distance carried per 90 at 52.2 metres,behind Hojbjerg (52.4m), Skipp (66.5m), and Ndombele (81.9m). Again though, Bentancur’s carries consistently lead to more shooting chances. None of the midfielders mentioned have had more carries followed by shots (5) or carries followed by chances created (9) than Bentancur. This suggests that he provides quality over quantity, and that he can be penetrative when needed.

One player who outperforms all of these centre-midfielders in this department is Dejan Kulusevski. Tottenham will be hoping their two new signings can link up and build on a relationship that already has some foundations installed from their time together in Turin.

One slight concern Tottenham may have is how rarely Bentancur and Kulusevski actually linked up on the pitch at the Allianz Stadium. Their time on the pitch at Juve was somewhat limited last season, playing just 1089 minutes together. This ranks 25th of 31 different partnerships analysed. They passed the ball to one another just 106 times, the lowest figure by a significant margin. When you break it down to passes per 90 between the two, it still ranks as fourth fewest.

As Conte seems adamant to continue with a midfield duo, rather than a three with Kulusevski in an advanced central role as suggested by some fans, it begs the question if much will change in the footballing relationship between the two players. If it does, and Spurs can get Kulusevski on the ball more often, the 21-year-old could become that creative spark that they are lacking. While Tottenham could benefit from Bentancur being a long-awaited replacement for Moussa Dembele, they certainly wouldn’t be disappointed if the Swedish winger was their replacement for current Brentford player Christian Eriksen.

You’ll see in the attacking sequence involvements for Juventus last season that Kulusevski was also high up on that list, in fifth. That gets even better when you break it down to a 90-minute average, when he leaps up to fourth in the list. He comes out with the most chances created per 90 (2.2), narrowly ahead of Rangers loanee Aaron Ramsey.

The former Parma man also boasts the highest expected assists (xA) per 90 from open play at Juventus last season with 0.17. The highest such return at Spurs for players who played over 10 games was Harry Kane (0.11) and Heung-min Son (0.10). In fact, the last Tottenham player to surpass that number set by Kulusevski was Christian Eriksen himself who registered 0.21 xA from open play per 90 in 2017-18 and 2018-19.

Next up for Tottenham is a trip to the Etihad to face Manchester City on Saturday, as they face the prospect of four consecutive Premier League defeats for the first time in 18 years. They will need everyone on top form, especially the new signings.

We might see Bentancur in a midfield three for the first time since joining. Conte has been vocal of the fact that he thinks the player is better suited to a midfield two, but can work in a three as he has done with Juventus and his national team in the past. Juventus predominantly utilised a classic 4-4-2 last season but switched it up at various points throughout the campaign without too much success. They sometimes used variations of a 3-5-2, which Conte has implemented in some of Tottenham’s best recent performances against Liverpool and Leicester.

If Bentancur gets the nod for this fixture, it will no doubt be his toughest challenge in a Spurs jersey so far. Given the quality he has shown in his first few games with the club, arguably the biggest midfield question facing Conte is who to play alongside the Deadline-Day signing in the heart of Tottenham’s midfield. The numbers are promising – he adds a dynamic that is undoubtedly missing from this Tottenham midfield. He offers balance, a bit of flair that Spurs fans have already fallen in love with, and the ability to move his team up the pitch. If Heung-min Son had taken the chance created for him by Bentancur in the first-half of the defeat at home to Wolves, we would already be talking about the new man’s first assist.

This team is better with Rodrigo Bentancur in it. Long may it last.