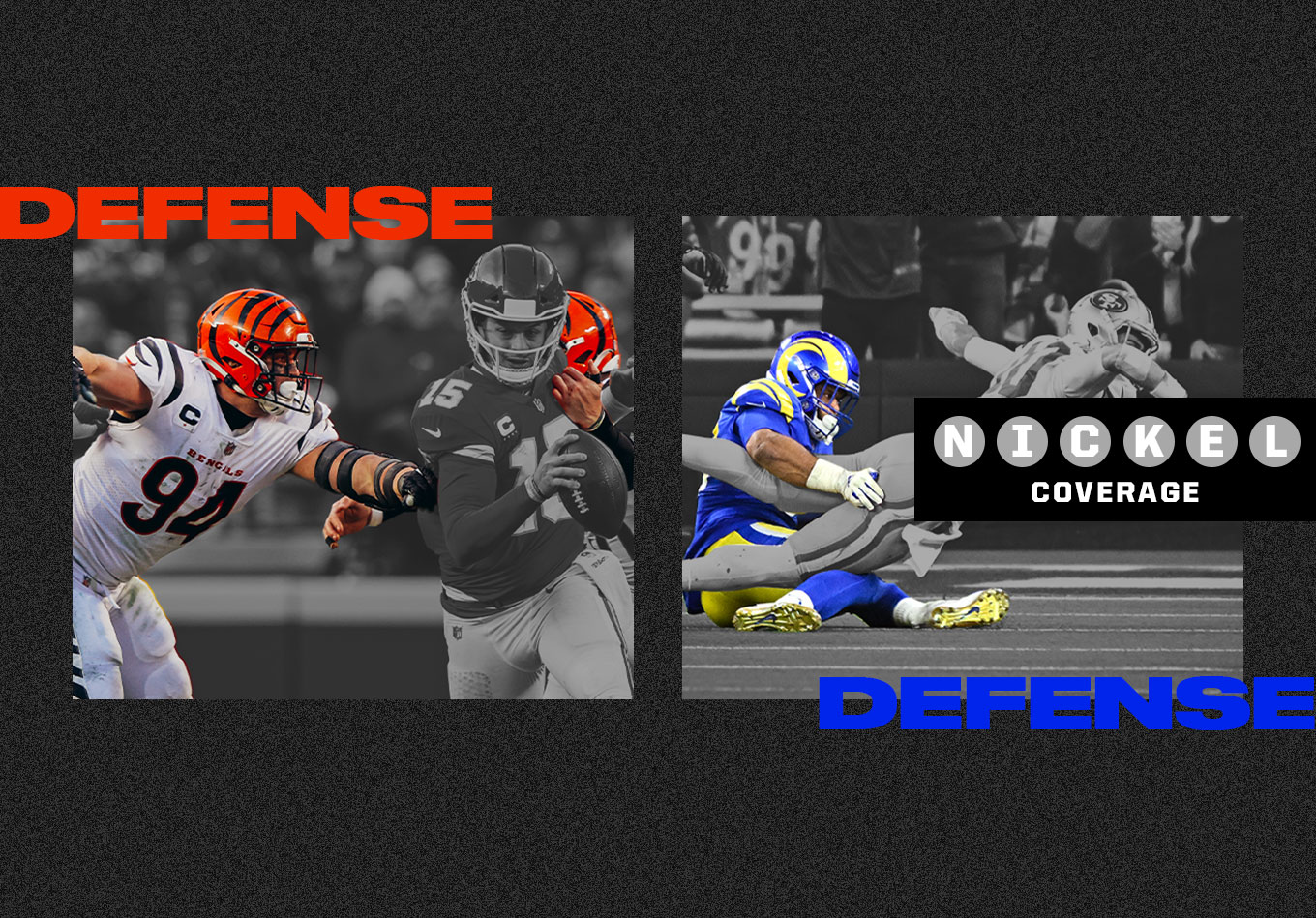 How the Bengals and Rams Turned the Tide on Defense

It’s not how you start, it’s how you finish.

The old adage rang true for the victorious defenses on conference championship weekend. A stunning upset pulled off by the Cincinnati Bengals appeared extremely unlikely when they fell 21-3 behind to the Kansas City Chiefs.

But the Chiefs scored just three points across the second half and overtime, with Patrick Mahomes intercepted twice as the Bengals fought back to claim an improbable 27-24 win.

Similarly, the Los Angeles Rams looked to be on the ropes at 17-7 down to the San Francisco 49ers when Jimmy Garoppolo hit George Kittle for a 16-yard touchdown late in the third quarter.

Yet the Rams outscored the Niners 13-0 in the fourth as Garoppolo and the San Francisco attack collapsed when the pressure was at its highest.

So how did both the Bengals and the Rams stymie their opponents when it mattered most and punch their tickets to Super Bowl LVI?

Arguably as important to stopping Mahomes through the air was the move the Bengals made to prevent him from doing damage with his legs.

The Bengals deployed defensive end Sam Hubbard as a de-facto spy of Mahomes, protecting against him rolling out and making throws on the move, as he did twice for touchdowns in the first half, or picking up yardage on the ground.

That meant relying on their coverage to hold up while sending only three-man rushes up front. The Bengals rushed three on 30.4% of their defensive snaps, and the results speak for themselves.

Mahomes attempted just six passes on the move and had five scrambles for an average of just 1.0 yard per carry (including lost yardage on sacks). In other words, when there was not a clear option for Mahomes when operating from the pocket, the possibility to escape and extend the play was taken away.

Travis Kelce had 10 catches for 95 yards and a touchdown while Tyreek Hill registered seven catches for 78 yards and a score. However, Hill did not have a catch after the first half and Kelce only had one across that second half and overtime that went for double-digit yardage as the Bengals’ ploy of sporadically bracketing both worked perfectly.

The combination of Hubbard’s deployment in an unfamiliar role and the attention paid to both Kelce and Hill led to the sight of a quarterback who was unstoppable in the divisional round running backwards as the pocket collapsed in a vain effort to produce explosive plays that were not there.

Mahomes had done an excellent job down the stretch of the regular season and in the playoffs of being patient and taking what the defense gave him. In the second half against Cincinnati, the Bengals afforded him no options, and that patience ran out.

Rams Give No Room to Run

The Rams did not need to lure Garoppolo into the bad decision, as Los Angeles knew that, with enough pressure on the much-maligned 49ers quarterback, a mistake is always on the horizon.

Los Angeles only pressured Garoppolo 12 times, but the pass rush came at the ideal time in the closing minutes of the fourth quarter as Aaron Donald and Co. took advantage of a banged-up offensive line when it mattered most.

The level of joy the Rams enjoyed late was in part a result of their success in defending the run. With the scoreboard turning rapidly in Los Angeles’ favor, San Francisco became one-dimensional after having been consistently stymied by the Rams run defense.

The often dominant 49ers running game was held to 2.6 yards per carry in the second half, putting the emphasis on Garoppolo and his O-Line to deliver. Kittle explained San Francisco’s struggles running the ball were due to the Rams employing a new wrinkle in blitzing the A and B gaps when the 49ers went in motion, leading to stacked boxes.

As the Niners tight end put it: “It’s hard to run the ball when there are nine guys in the box.”

After erasing the Niners’ 10-point lead, the Rams defense could go in attack mode with the ground game shut down and no reason to fear the opposing quarterback.

Given the struggles of the Bengals offensive line, a similar approach could well be used in the Super Bowl.