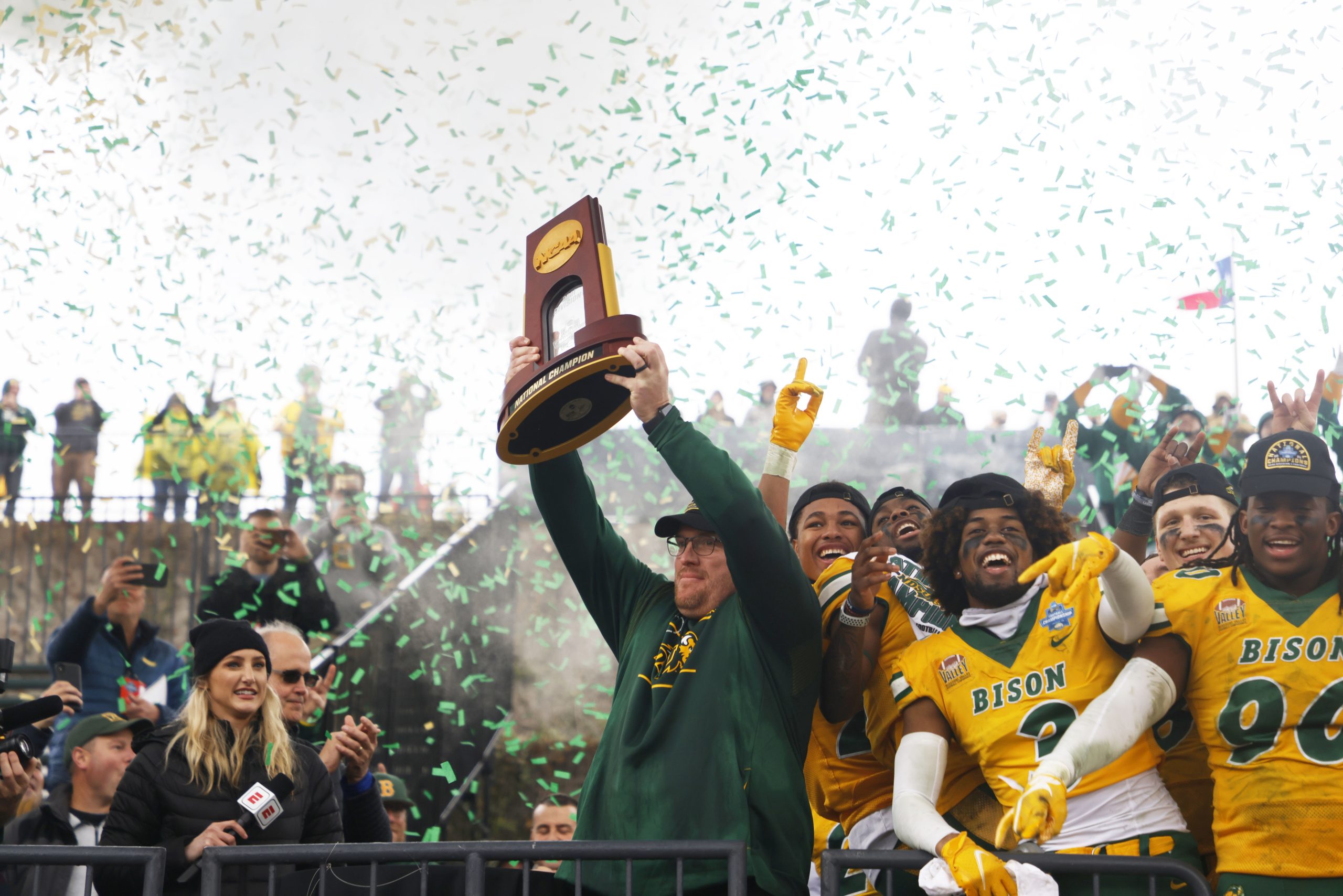 Watson, appropriately wearing a No. 1 jersey, held an index finger up high for nearly 30 yards of the jaunt.

The Bison were No. 1 again and doing it with style while pounding Montana State 38-10 in the NCAA Division I FCS championship game before 18,942 Saturday at Toyota Stadium.

While third-year coach Matt Entz won his second national title, NDSU extended its record total to nine since 2011. Montana State coach Brent Vigen was there for the first three as offensive coordinator, but, as Entz explained after his team completed a 14-1 season, “It was going to be hard to beat the Bison today.”

Same ‘ol, same ‘ol, of course, but winning doesn’t get old for the FCS dynasty.

The dominance of the offensive line has been at the center of North Dakota State’s FCS dynasty. By the time Hunter Luepke, the game’s most outstanding player, had scored three touchdowns and the Bison had an insurmountable 28-0 halftime lead, the big men up front – a unit affectionately known as the “Rams” and anchored by All-America right tackle Cordell Volson – had paved the way for a 268-70 advantage in rushing yards, and it was 380-156 by game’s end. Johnson (106), backup quarterback Quincy Patterson (99) and Luepke (82) were the leading rushers, and the Bison became an incredible 130-1 when they’ve rushed for 162 or more yards since 2011.

“O-linemen are cult heroes in Fargo, North Dakota,” Entz said. “Everybody knows who No. 67 (Volson) is.”

The footing on the Toyota Stadium turf wasn’t 100% following morning rain and two recent bowl games, but Montana State’s offense may as well have been operating in quicksand. North Dakota State ranked No. 1 in the FCS in scoring defense this season, finishing at 11.1 points per game, which is the best of the Bison’s Division I era (since 2014).

Bobcats quarterback Tommy Mellott, who had been sensational in three playoff wins, was knocked from the game with a left ankle injury after the game’s opening drive, and it took until the second half before backup Tucker Rovig gained effectiveness.

“I think it definitely changed us,” Vigen said.

One Season at a Time

NDSU eliminated Montana State in the playoffs for the third straight time – each win by at least 28 points – leaving Vigen to lament that while the Bobcats continue to close the gap, the Bison are not slowing down.

That NDSU was eliminated early (quarterfinals) in the spring season playoffs, the Bison played a lot of younger players, including quarterback Cam Miller, and were primed for a banner fall campaign. They played 25 games in less than nine months, yet seemed strong and fresh for the trip to their home away from home in Texas.

It would have been easy to point to the nine national championships and overall dynasty, but Entz instead talked about how this season’s national title was the first for the 2021 team.

“What an amazing finish to an unbelievable year,” said Entz, whose team is well-stocked, and already favored, to be back in Frisco.