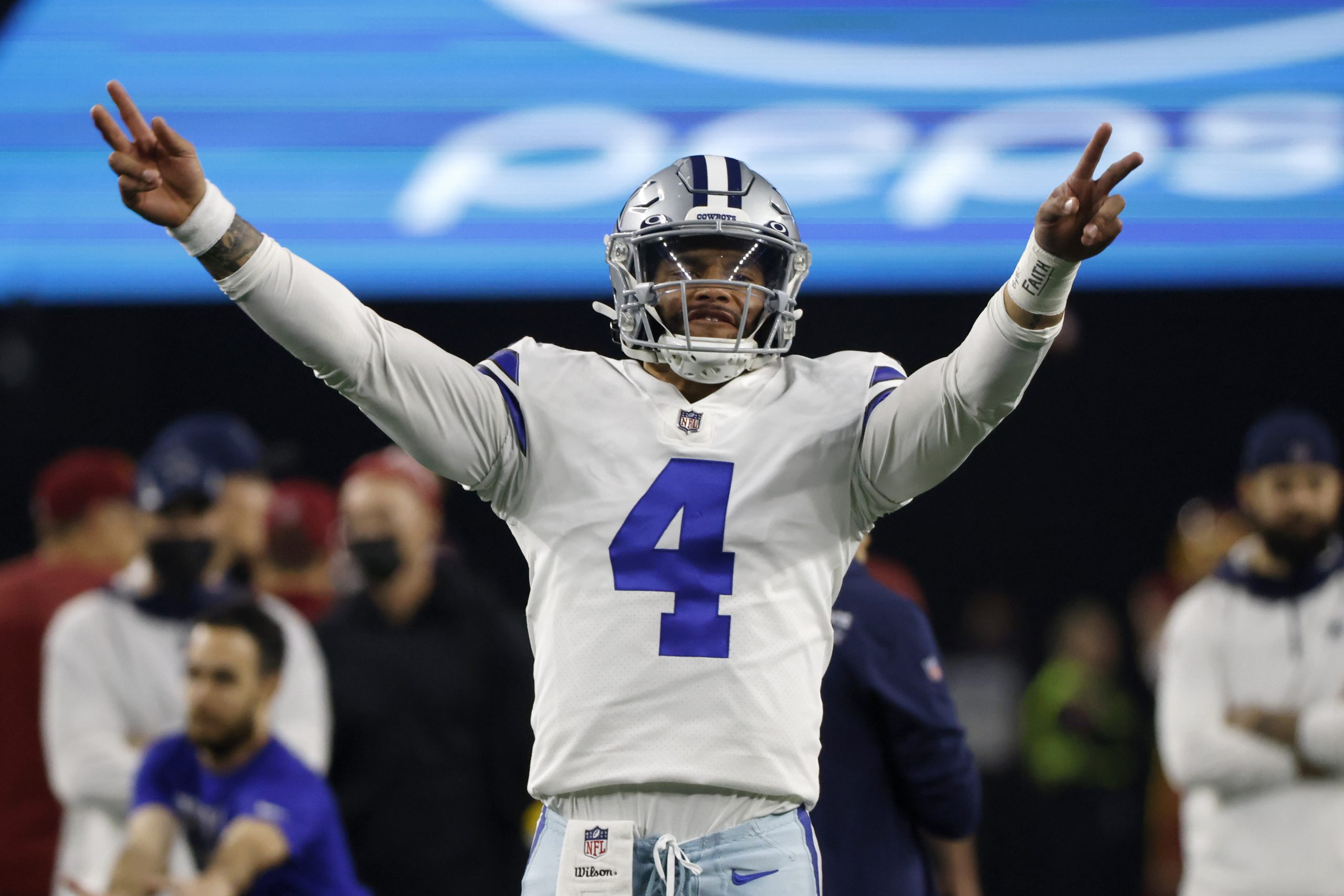 Cover 3: For Some Teams, the NFL Playoffs Have Already Begun

The playoff picture is becoming clearer, but there’s still much to be decided over the final two weeks of this NFL season.

The suspense is starting to dissipate in the NFC, where now five of the seven postseason berths have been claimed after the Dallas Cowboys, Tampa Bay Buccaneers, Los Angeles Rams and Arizona Cardinals all punched tickets last week. The two remaining spots could be decided as soon as Sunday, with the San Francisco 49ers and Philadelphia Eagles now well-positioned to join the party.

With the No. 1 seed and its coveted opening-week bye still up for grabs, those with bids locked up continue to have plenty to play for, however. The Green Bay Packers remain on the inside track with their league-best 12-3 record, with the Cowboys looming as their greatest threat by virtue of a stellar 9-1 mark in conference games that could end up as a valuable trump card in any tiebreaker scenario.

Dallas still faces something up an uphill climb to reach that goal, though, as the Packers can clinch by winning out and will be massive favorites in their season finale at lowly Detroit.

That increases the level of importance for Green Bay’s upcoming game, a home date against the rival Minnesota Vikings this Sunday night in which the Packers get an opportunity to avenge one of their three 2021 defeats. It’s the highest-rated contest on our Week 17 watchability index and one of three we’ll break down in further detail, a list that includes Dallas’ showdown with the playoff-bound but downward-trending Cardinals.

So, without further ado, here’s what to look for in the three most watchable games of this weekend:

Why to Watch: The AFC race remains quite cluttered and would take a novel to fully explain. Still, five teams (the Buffalo Bills, New England Patriots, Cincinnati Bengals, Tennessee Titans and Indianapolis Colts) carry high probabilities of joining the front-running Kansas City Chiefs in this season’s tournament based on our projections.

That leaves one spot entirely in limbo with three main candidates to fill it in the up-and-down Chargers, the resurgent Miami Dolphins and the spiraling Baltimore Ravens, though the Las Vegas Raiders could join that group should they manage to pull out a victory in a tough matchup at Indianapolis this weekend.

This AFC West clash likely wouldn’t be at the top of many people’s lists when ranking this week’s interconference games – the Chiefs’ visit to Cincinnati for a showdown of division leaders would probably win that vote. Still, it’s a sneaky good matchup and a crucial one for the Chargers, who suddenly find themselves on the wrong side of the playoff bubble following an inexplicable Week 16 loss at Houston.

The Broncos’ chances have become slim and bordering on none after dropping their last two games, but they still rate as a tough draw for a Los Angeles team they beat by double digits back in Week 12 – even with the spectacularly mediocre Drew Lock set to start at quarterback in place of a concussed Teddy Bridgewater.

Sure, the Chargers were without several key players for last week’s 41-29 setback to the Texans due to an extensive COVID-19 outbreak, but most of them were on the offensive side. That doesn’t explain – or excuse – the fact that a supposed playoff contender was manhandled at the point of attack by a three-win team that had nothing to play for but pride and was starting a rookie quarterback.

Houston sits dead last in our team run blocking rankings, having won a substandard 66.0% of its individual matchups for the season, yet was still able to pave the way for a 149-yard, two-touchdown day for Rex Burkhead as it dictated terms all game long.

It wasn’t the first time an opponent has run at will on Los Angeles this season. The Chargers have surrendered 175 or more rushing yards a league-high six times in 2021, and they’re 28th in the NFL in defensive EVE against the run.

It’s no secret that the Broncos are going to try to pound the football with their two-back combo of Melvin Gordon and rookie Javonte Williams, who’s averaging a league-best 2.61 yards after contact. Denver is 4-1 when rushing for 140 or more yards this season and had 147 in its 28-13 home victory over the Chargers in late November.

If the Chargers are able to contain Denver’s solid ground attack, which ranks eighth overall in rushing EVE, and force the Broncos to throw more than desired, they should have a more than reasonable chance of coming away with a much-needed win. Lock can be very vulnerable to mistakes, as his pickable pass percentage of 6.56 in limited action this season is near the bottom of the league.

Why to Watch: It’s a battle between playoff teams, even if the Cardinals haven’t been playing like one lately with three straight defeats that have made their 7-0 start seem like it occurred during the franchise’s days in St. Louis.

As we previously discussed, Dallas remains a viable contender for the NFC’s top seed but is almost certainly going have to win out to have any chance of grabbing it. And Arizona is still very much in the hunt for an NFC West title despite its struggles. Though the skid has dropped the Cardinals a game back of the surging Rams for first place, they can go back to controlling their own destiny with a victory in Big D combined with a Los Angeles loss in Baltimore this weekend.

Arizona faces a very tall order, however, as the Cowboys are rolling again with four straight wins including last week’s 56-14 bludgeoning of the Washington Football Team. The league’s most opportunistic defense continues to bait opponents into mistakes, and if one game is any indication, Dak Prescott is back to playing like an MVP candidate again after he torched the Football Team for 330 passing yards and four touchdowns.

The Cardinals and Kyler Murray were at the top of the NFL world a little over two months ago, but things have gone south for both team and quarterback since. Murray led the league with a 116.8 passer rating and a 73.5% completion rate during Arizona’s season-opening seven-game streak, but those numbers have dropped dramatically as the Cards have lost four of his last five starts. Over that stretch, the 2019 No. 1 overall pick has completed an ordinary 63.5% of his throws with an Andy Dalton-esque 80.4 rating.

So, what’s changed to explain Murray’s steep decline? The truth is, he hasn’t been all that great under pressure, and he’s been facing more of it during the second half of the season.

Murray’s pickable pass percentage of 2.06 when not pressured is the fifth lowest of any quarterback with at least 200 attempts in those conditions this season. Under duress, that mark rockets up to an unsightly 8.89%. Only rookies Justin Fields and Davis Mills have a higher rate among the 34 quarterbacks with 75 or more pass attempts under pressure.

Murray’s accuracy has also waned sharply when pressured, as the chart below illustrates.

Arizona’s offensive line was doing an outstanding job of protecting Murray during the 7-0 start, having yielded pressures (any play with a sack, hit, hurry or knockdown) on a very low 35.1% of dropbacks over that time frame. That number has climbed to 40.9% over the last four weeks, still above league average but enough of a drop-off to suggest it’s negatively impacted its quarterback’s performance.

Unfortunately, Murray and his linemates now have to go up against a Dallas defense that’s been among the league’s fiercest at generating heat, especially since getting back standouts DeMarcus Lawrence and Randy Gregory to complement rookie sensation Micah Parsons. The Cowboys have gotten pressures on 50.6% of opponent dropbacks in the four games since Lawrence returned from a broken foot, with their ball-hawking unit producing 14 takeaways in that stretch.

Gregory (28.6%) and Parsons (28.0) own the second- and third-highest pressure rates, respectively, among edge players with 100 or more pass rush opportunities this season, trailing only Cleveland star Myles Garrett’s 31.3%.

Why to Watch: Though Green Bay is squarely in the driver’s seat to earn the NFC’s No. 1 seed for a second straight season, it can ill-afford a slipup with the Cowboys, Rams and Buccaneers still breathing down its neck. Still, this prime-time affair looms even larger for the Vikings, who stand a good chance of being eliminated from postseason consideration with a defeat. Minnesota trails San Francisco and Philadelphia by a game for the conference’s two open wild-card spots, and both the 49ers (vs. Houston) and Eagles (at Washington) have very winnable games on tap this weekend.

The erratic Vikings, who came through with a thrill-packed 34-31 victory over Green Bay in Week 11, would be a dangerous opponent at full strength, but they’ll be without quarterback Kirk Cousins (reserve/COVID-19 list). Minnesota now heads into a must-win contest with journeyman Sean Mannion set to start an NFL game for only the third time in his seven-year tenure.

To no surprise, the Packers have gone from solid to heavy favorites as a result of the Cousins news, and keep in mind the win probability projected above was factored in prior to the quarterback change.

That Week 11 clash featured a terrific aerial duel between Cousins and Aaron Rodgers, with both quarterbacks amassing over 340 passing yards and combining for seven touchdowns. Don’t expect a repeat, however, if Mother Nature has her way.

The previous meeting took place in the cozy indoor environment of Minnesota’s U.S. Bank Stadium, and the conditions won’t be anywhere near as comfortable for the rematch with single-digit temperatures forecasted at Lambeau Field on Sunday night.

Also don’t expect the Vikings to alter their original game plan much with Mannion under center. They figured to rely heavily on the legs of Cook, perhaps freshened after sitting out Week 16 with his own COVID issue, regardless of the circumstances.

That was very much the case in Minnesota’s most recent visit to Lambeau Field, when Cousins threw the ball a mere 14 times as Cook carried the Vikings on his back in a 28-22 win. The standout running back was clearly the X-factor on that chilly afternoon with a superb 163 rushing yards and three touchdowns on 30 attempts.

That needs to be the Vikings’ M.O. once again to have their best chance at an unexpected season sweep of their storied rivals, especially with Cousins unavailable and the ultra-dependable Adam Thielen also unable to serve as Minnesota’s best red-zone threat and to help draw coverage away from fellow wideout Justin Jefferson.

The Packers may very well oblige, as their run defense has been an absolute sieve during the season’s stretch run.

Green Bay has yielded a troubling 166.3 rushing yards per game and 6.7 yards per rush attempt over the last three weeks, with some supporting numbers that are equally as bad. The Packers have a stuff percentage (opponent rushing plays of negative yards) of 2.7% during that three-game stretch, the second lowest in the NFL for that period.

They’ve also allowed gains of 10-plus yards on a startling 25.7% of run plays in that time frame, by far the highest in the league.