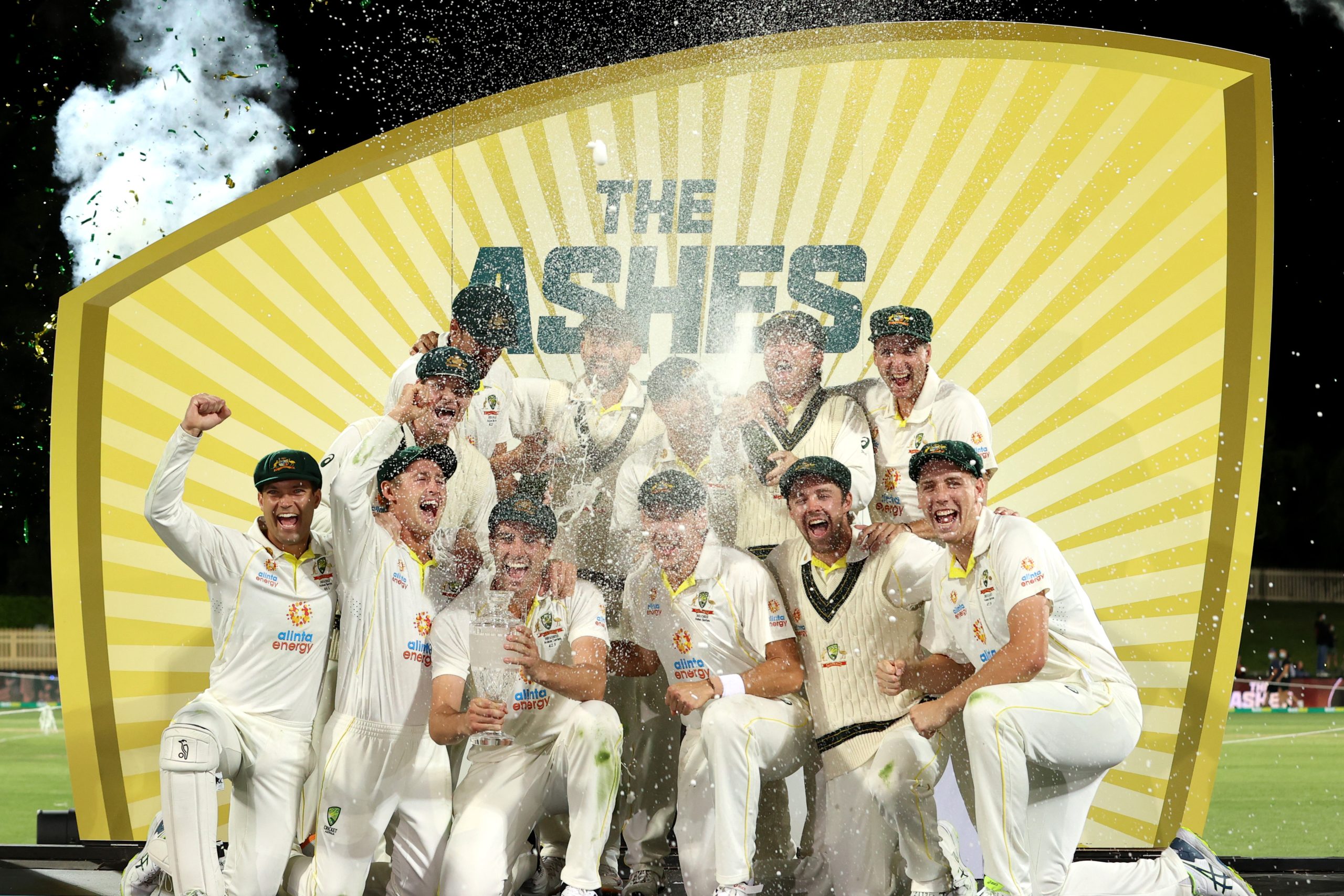 For a moment, England had a sniff. At 68-0, chasing 271 to win, they had an outside chance of pulling off an unlikely victory. Someone would need to go big, but it was not beyond the realms of possibility.

Then Cameroon Green bowled Rory Burns, as the left-hander tried to awkwardly leave a delivery outside off-stump. In less than two hours, England would have lost the match, as 68-0 very quickly became 124 all out. This particular vintage of collapse was the loss of 10 wickets for 56. Not bad.

In a game where ball has continually dominated bat, particularly as day turns to night, it should have come as no surprise. Add to that, that the highest fourth-innings chase in any Day/Night Test to date is 187, chased down successfully by Australia against New Zealand in Adelaide in 2015, then the writing was on the wall long before England strode out to bat.

England’s opening partnership of 68 is not only the highest opening stand in the series so far, it’s England’s highest against Australia since Alastair Cook and Michael Carberry added 65 at the MCG Test in 2015.

Earlier in the day, Mark Wood had been the key man in England’s bowling attack. He finished with figures of 6-37, not only his career-best figures, but the fourth-best six-wicket haul of any England bowler against Australia in Australia. Wood has had a fantastic series, and ends as England’s highest wicket-taker. But despite his best efforts, Australia managed to scrap from 63-6 to finish 155 all out, with Alex Carey’s 49 the highest score for any Australian wicketkeeper at this venue since Matthew Wade notched 68* against Sri Lanka in December 2012.

Once Burns fell, it was a procession, with all Australian’s seam bowlers picking up a wicket. Cameroon Green claimed a career-best 3-21, while Scott Boland’s incredible start to Test match cricket continued. He picked up three wickets himself, and his Test match bowling average dipped below 10 once again, after it had alarmingly breached that mark in the first innings of this Test.

The leading runs scorers in this series tell you all you need to know about how the 2021-22 Ashes were won:

Unsurprisingly Travis Head was named player of this Test and also the series as a whole.

And Australia dominated the bowling too, with skipper Pat Cummins ending the series as the highest wicket-taker:

England and Joe Root avoided the ignominy of a 5-0 whitewash. But that will be of little solace to this group as they begin to pick over the bones of this dismal tour.

The tour cannot end soon enough for England. Bowling on the second morning, Mark Wood picked up two quick wickets, before Australia’s tail counter-attacked through Nathan Lyon, taking their total to 303. That’s a total, by the way, that England still have yet to surpass in 12 innings. In response, England could muster only 188 as the Aussie quicks did the damage again. A late burst from Broad, Wood and Chris Woakes reduced the hosts to 37-3, but they still hold a commanding lead of 152 runs.

England came out with a clear plan to bowl short at Australia’s lower order. Wood got the early breakthrough they wanted, with Mitchell Starc holing out to Rory Burns at square leg. Just like Starc, Pat Cummins also top-edged a bouncer down to square leg.

Wood continued an aggressive short length to new batsmen Nathan Lyon, who had more luck taking him on, smoking him for three huge sixes. It marked a brilliant cameo from Lyon, who scored 31 off 27 balls, taking Australia beyond 300. He was eventually dismissed by Broad, who now goes to 129 wickets, ahead with Bob Willis as England’s second-most prolific wicket-taker against Australia.

Despite those two early wickets, Wood’s figures of 3-115 were his most expensive spell in Test cricket (min. 1 over bowled).

Given where England had Australia yesterday, a first innings score of 303 felt at least a hundred runs too many.

England’s reply started horribly, with Rory Burns run out via a direct hit from Marnus Labuschagne. Burns is the first English opener to be run out in a Test since he himself was run out against New Zealand in Hamilton in 2019.

Prior to that, the last English opener to be run out in a Test was… Rory Burns against Sri Lanka in Galle in 2018.

After that, it was a day of starts for England with players getting in and out. Crawley made 18, Malan 25, with his a particularly soft dismissal, strangled down the legside. Cummins got each of them, before prising out the key wicket of Joe Root. Cummins later dismissed Wood for the final wicket of the innings, taking him to 20th in Australia’s all-time list of scalps. The next name on the list for Cummins to mark off is Alan Davidson with 186.

Stokes and Pope fell cheaply, before Sam Billings gave a pretty good account of himself on debut. Woakes top-scored with his 36, having been dropped on 0 and 5 in the slips. Broad then managed four deliveries against Starc and in truth, every single one could have got him out.  England’s senior paceman now has 39 ducks in his Test career, second only to the West Indies Courtney Walsh (43) as the most in Tests.

The one, and only positive, about England’s collapse was that they had a chance for a burst at Australia under favourable conditions. Broad got his favourite man, David Warner, for a duck. For Warner, it was his second pair in Test cricket (the other one at Old Trafford in 2019).

Including this game, when winning the toss and electing to field first, England have conceded 290+ runs in a first innings on 50 occasions in Tests. Of the prior 49 occasions, England have five wins, 20 losses and 24 draws.

Oh, what could have been for England? After winning the toss and electing to bowl on a green wicket, they started the day on fire, reducing Australia to 12-3 inside the first 10 overs.

With the ball doing all sorts off the pitch, England bowled a fuller length inside those first 10 overs than in any other innings so far, and they were justly rewarded.

Stuart Broad and Ollie Robinson started brilliantly, and their lengths remained fairly impeccable throughout the day, both hitting 77% of their balls on a length. Robinson struck first, getting David Warner caught in the cordon for a 22-ball duck. Since ball-by-ball data became available, Warner’s was the longest innings without a run for an Australian opener in Test Cricket, and it was only the third time that he’s been dismissed for a duck in a home Test.

Then Broad nipped out Usman Khawaja for 6. Even Khawaja, who of course recorded back-to-back hundreds in the last Test match, was not immune to the nagging lengths and assistance from the pitch that England were getting.

Then a costly drop from Zak Crawley in the slips saw Marnus Labuschagne granted a life on 0. Given England’s frailties with the bat, and the way the ball was behaving, it felt like England had missed a big chance to really roll out Australia for a low score.

Crawley did regain his composure to dismiss Steve Smith moments later, as Robinson got him for a two-ball duck. Robinson was able to induce false shots at a far higher rate than any of his team-mates, doing so with 40% of his deliveries.

England have kept Smith relatively quiet in this series, certainly compared to recent Ashes tours. Smith has scored 217 runs so far at an average of 31. Granted, only two England batsmen have scored more runs than him, but that’s not exactly been a barometer of success in this series.

However, Labuschagne was to make England pay for his drop, scoring 44, as he and Travis Head counter-attacked effectively. They brought up their 50 partnership off just 43 balls as England’s change bowlers, particularly Mark Wood, were unable to maintain the stranglehold that Broad and Robinson had applied. After his first three overs, Wood had 0-31.

Labuschagne and Head put on 71 together at almost a run a ball, before the former was bowled comically around his legs by Broad.

But Cameroon Green then joined Head at the crease and the counter-attack continued. They brought up their 100 partnership from just 117 balls, making 121 in total. It was one-day stuff, especially from Head who attacked 42.5% of the deliveries he faced, over double the level of aggression shown by any other batter.

Travis Head smacked his way to his second hundred of the series from 112 balls. The left-hander is now the leading scorer in this series, but perhaps more damaging has been the rate at which he’s accumulated those runs. His strike rate of 87.5 is the most of any player to have appeared in more than one match. On a green surface, coming in at 12-3, it is a potentially match-winning knock.

Rain brought an early end to proceedings, with Australia finishing on 241-6, after Head had gone for 101 and Green for a punishing 74. It already feels like a good total on this pitch, particularly against an England bowling attack that looks to be falling apart. Stokes is obviously still injured, and Robinson looked like he picked up a niggle.

With Wood and Chris Woakes not at their best, it’s a lot to ask 35-year-old Broad to continue to put this team on his back.

Joe Root bowled 10 overs under the lights. That’s not what he’d have envisioned having put the Aussies into bat this morning.

Our Win Predictor again gives the edge to the Australians. Their 66% chance of a win is very similar to the 69% the model gave them at the start of play, while our Score Predictor model estimates Alex Carey to lead the tail to a score of 324 all out.