The Rashford Files: Manchester United's Mr Endeavour Is Trying Hard, but It's Not Working Right Now | The Analyst 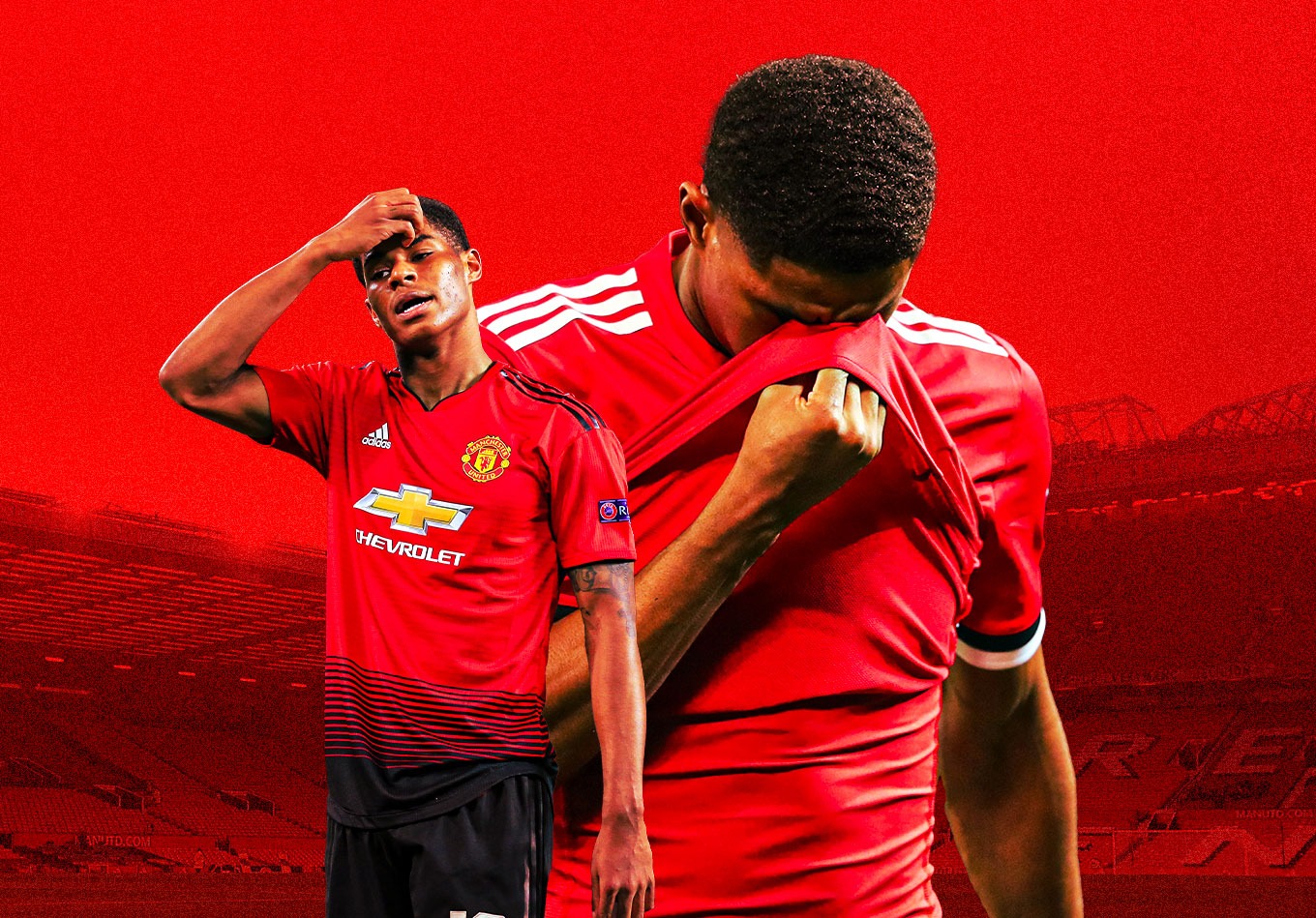 Marcus Rashford is enduring a tough time with Manchester United, his form and morale a concern for those watching on.

Ole Gunnar Solskjaer came in for just a smattering of criticism during his final weeks in charge of Manchester United. The fact that his team had apparently forgotten how to play professional football matches was quite the talking point.

But few things put quite so many noses out of joint as his comments about Marcus Rashford some weeks before his departure.

In October, as Rashford prepared to make his first appearance since shoulder surgery two months earlier, Solskjaer suggested the forward needed to “maybe prioritise his football” after 18 months of dominating headlines for philanthropy rather than finishing.

Later, Solskjaer was forced to clarify his remarks as some felt he was criticising Rashford for tallying up free school meals instead of goals. That felt unfair given Solskjaer was generally speaking in glowing terms, but if there was a hint of brutal honesty there, it’s only grown more pertinent.

Rashford is an estimable young man, one who has forced a government into two U-turns over providing for disadvantaged children, who was awarded an MBE for his charity work at the age of just 24. He is also an elite footballer who has produced far too many uninspiring performances in the past year, whose form only seems to be getting worse, who has only played a full game on two occasions all season and who caused astonishment in the Stretford End when he gave up chasing a loose ball in the penalty area in the FA Cup win over Aston Villa.

For United interim manager Ralf Rangnick, Rashford is potentially one of his greatest assets. Right now, his form – and his mood – represent one of his biggest problems.

Rashford started 2021 in promising fashion, with six goals and five assists in 20 starts in all competitions beginning with one of each in an FA Cup win over Liverpool at Old Trafford. Soon came a seven-game run in which United went into pragmatic mode, keeping clean sheets in all but one match but scoring only four times. Rashford then netted in consecutive games and looked to be firing again.

He would only score another four goals for United all year.

Some important context is needed. Rashford went through some personal upheaval last year that would have been hard simply to shrug off. He also spent much of 2021 playing through injury: ankle and shoulder problems were a big hindrance when he was on the pitch, and the latter required an operation following Euro 2020, a tournament to which even he admitted he probably shouldn’t have gone. He did go, of course: he played 83 minutes, all as a substitute, failed to score and missed a penalty in the final shoot-out. He did not then appear in 2021-22 until October 16. While he marked his return with a goal, it came in a 4-2 defeat to Leicester City that spelled the beginning of the end for his manager. This was hardly the smoothest of years.

Part of the reason Rashford played through pain for so long was he embraced being Solskjaer’s Mr. Reliable. He played 135 games under the Norwegian, more than any other United player. In that time, he also scored the most goals – 55, 11 more than Bruno Fernandes – and provided 22 assists, a tally behind just Fernandes (33) and Paul Pogba (23). In the nearly three years Solskjaer was in charge, both as caretaker and permanent boss, only seven Premier League players scored more goals than Rashford in all competitions.

Like many managers, Solskjaer had his favourites. It gave his team a consistent structure and meant that, when things were going well, good habits and good spirits could permeate the side. But when it started to go wrong, when players kept their places even as their form took a nosedive, the scrutiny and pressure to improve grew exponentially. This took its toll in real-time: Harry Maguire went from England rock to a running joke, Fernandes looked more forlorn with every flail of his arms. And Rashford, as former United star Rio Ferdinand pointed out, has looked like he has the weight of the world on his shoulders, running himself further into the ground with every poor display.

From April 9 until the end of 2021, Rashford scored four goals in 23 games in all competitions. Among Premier League players, he had a worse strike rate than Burnley’s Jay Rodriguez (five goals in 23 games) and Leicester defender Jonny Evans (four in 21). Former Red Devil Danny Welbeck scored the same number in just 14 Brighton and Hove Albion appearances.

Over the same time frame, Rashford managed three assists, as many as Pierre-Emile Hojbjerg and Joshua King, and one fewer than Conor Gallagher. That left him on seven direct goal involvements, while midfielders John McGinn and Declan Rice managed eight.

Rashford created 19 goalscoring chances over that time, marginally more than Leicester’s close-season signing Patson Daka (18) and Chelsea centre-back Antonio Rudiger (17). Rashford (45) had only two more shots than Rudiger over that time, with just 14 on target, the same number as Liverpool right-back Trent Alexander-Arnold.

On average, Rashford was involved in 0.4 goals per 90 minutes; among United players with at least two goals in that time, only three come off worse. One is July signing Jadon Sancho, a 21-year-old trying to adapt to a new club, new systems and new expectations. The others are Fred and Scott McTominay.

Just after his appointment, Rashford spoke positively about Rangnick’s attention to detail.

“He’s done a good job because prior to him coming in he spent a lot of time analysing the team and analysing individuals and he knows what our strengths are,” he said to Sky Sports.

“We’ve got a lot more together, we’ve obviously been working on pressing and we’ll still improve on that, but the main thing is just doing everything together as a team, whether we are attacking or defending.”

For his part, Rangnick doesn’t appear outwardly worried about Rashford’s form, even though he was at a loss to explain it. Speaking after the win over Villa, he said: “Of course, it would be good, for example, for Marcus if he could score a goal but as long as he’s trying, as long as he’s training well, I don’t see that much of a problem.”

“Trying” doesn’t seem to be an issue. Rangnick, we know, is a stickler for hard running and high pressing, and only Cristiano Ronaldo (93) has made more sprints than Rashford (85) in the Premier League since the German was appointed in late November (including the 3-2 win over Arsenal, when Michael Carrick was still in caretaker charge of the side). Similarly, only McTominay (82) has contested more duels than Rashford (53), and nobody has attempted more dribbles (22).

Going back to the start of last year, Rashford has recorded 500 sprints in the Premier League, the fourth-most among United players at a rate of about one every four and a half minutes. The only United attackers to play at least 10 times with better rates are Sancho (4.4 mins) and Dan James (3.1 mins), now at Leeds United. Ronaldo, if you’re interested – and let’s face it, you are – averages roughly one sprint every five and three-quarter minutes, which is more frequent than Fernandes, who is closer to one every six minutes.

On and off the pitch, you can’t fault Rashford’s endeavour. The story of the past year hasn’t been one of attitude, but aptitude. Rashford runs, but not always at the right moments; he dribbles, but in the wrong areas; he finds an opening, and he makes the wrong choice.

You don’t need to look too closely to see that Rashford’s output is below par this season, but the deeper you dig, the starker that reality becomes.

Across all competitions since January 1 last year, Rashford has attempted 207 take-ons, way more than any other United player (Mason Greenwood is next on 170), 178 of which have been in the opposition’s half. His 21 drives into the box are at least 10 more than anyone else at United, he is joint-top for take-ons with a shot (seven, with Greenwood) and top for take-ons with a chance created (four). He is also United’s attacking player with the most progressive carries in which he has moved with the ball 10 metres or more towards the opponents’ goal (158).

However much the Villa incident suggested otherwise, there’s no obvious lack of effort.

Yet there is a verifiable, worrying lack of efficacy in these attempts to make things happen. Looking at the Premier League alone, only five players since last January 1 have attempted more take-ons in the opposition half than Rashford (128). The man top of that list, Adama Traore (184), is the only player with more drives into the box (26 to Rashford’s 16). But the Wolves winger, so often derided for lack of end product, has 11 take-ons with a shot and 14 take-ons with a chance created, 14 more than Rashford when you combine the two.

Over the same period, Mohamed Salah (41) had the most carries to end in a shot, with Greenwood second alongside Harry Kane with 38. There are 25 players who had more than Rashford (18). When it comes to a carry ending in a chance created, Traore is top of the table with 36. Rashford, with 10, is below 49 other players.

It reflects a recurring concern: that when Rashford runs at defenders with the ball, it’s less a calculated attacking move and more one of hope, or desperation. It’s a symptom of both Solskjaer’s system, which relied on the spontaneity of the individual, and of Rashford’s own conviction that any problem is just waiting for him to solve it. He tries to play like a man who has earned the famous United number 10, a superstar performer in a squad bursting with talent. In reality, the shirt looks heavier with every passing minute.

In some ways, Rashford is emblematic of United’s wider problems. He desperately needs not only a morale boost, but a tactical one: he needs hardline instructions, and to play in a system in which he feels confident as well as competent. Ironically, he is one of the few for whom the Solskjaer-Rangnick transition should be simplest since both Ole’s 4-2-3-1 and Ralf’s 4-2-2-2 offer the kind of wide left attacking role Rashford likes best.

Whatever the root cause of his malaise, he will be desperate for things to change, and change quickly. Perhaps they will. Perhaps he’ll light up Villa Park on Saturday, kick-start his return to form and United’s road to redemption.

After all, U-turns are a Marcus Rashford speciality.