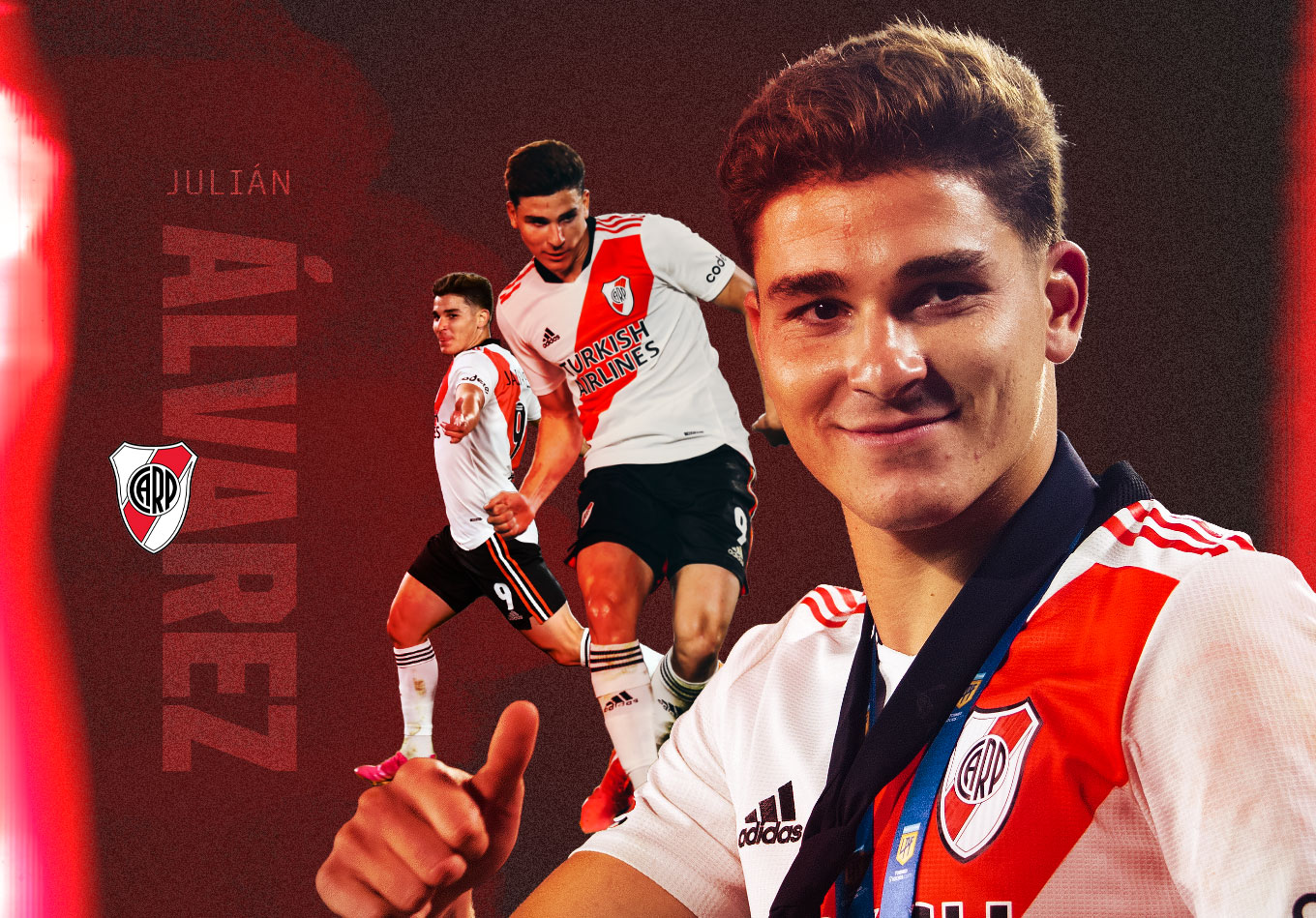 Argentina’s Next Star: How Good is Julián Álvarez?

Julián Álvarez has emerged as the new jewel of Argentine football in recent months. Scoring 19 goals and assisting seven more across only 16 appearances has elevated him into a new dimension – but could he transfer that form over to European club football?

“Where the stars are born” was the slogan of the Argentine Primera División until a few years ago, because the top-flight league in Argentina has been known to serve as a cradle for talent and a source of stars for competitions all over the globe. According to CIES via FIFA, Argentina is the third largest exporter of football players behind Brazil and France.

The Argentinian player production is not homogeneous, but can be divided into at least three main categories:

Even though Argentine football has produced good players in recent years, few of them have been placed in the most important European teams, and when that has been the case, it was more as a development project (such as Gio Lo Celso to PSG and Lautaro Martinez to Inter) than for players to have an immediate impact.

Julián Álvarez emergence at Marcelo Gallardo’s River Plate – mainly because of the leap in quality he has made over recent months (19 goals and seven assists in 16 games) – makes the possibility of a transfer from an Argentine team to a top European team more likely and even one that could make an instant impact.

A Long Way to the Top

Julián Álvarez hails from Calchín, a small town in the interior of Córdoba (the second-most important province in Argentina). He’s always attracted attention for his talents, to the point that by the age of 11, he had already passed his River and Boca trials.

During Boca’s trial, he was spotted by a Real Madrid scout, who brought him to Europe where he played with the Blancos, winning the championship, and scoring several goals. The main reason for not signing a deal at Casa Blanca was a rule prohibiting the club from signing foreign players under the age of 13.

After deciding to be patient, he stayed in Calchín for a few years to play for his hometown team following the advice of Matías Almeyda – former River star and until recently coach of the San José Earthquakes. He then joined the youth team at River Plate, where he won multiple championships both at home and abroad.

His first team debut for River was against Talleres on September 9, 2018, where he scored the only goal in his team’s 3-1 friendly defeat. During the local tournament, Gallardo quickly made him the starter in several matches at the local tournament, where River used an alternative lineup because they were in the final stages of the famous Copa Libertadores 2018.

Alvarez’s performances were good but not great, so it was a surprise to see him come off the bench in the CONMEBOL Libertadores final with the game still tied in the historic derby between River and Boca at the Santiago Bernabéu.

In those first matches, Álvarez played as a winger, and sometimes as a fourth midfielder, in a River team with experienced and proven forwards that included Lucas Pratto (whose transfer is the biggest investment in the history of the team from Nuñez), Rafael Santos Borré (a Colombian striker on loan from Atlético Madrid who now plays in Germany), Ignacio Scocco (champion at Newell’s and with a long career including six appearances for Sunderland) and from 2019, Matías Suárez (a former star at Anderlecht in Belgium).

In 2020, Álvarez became more involved (seven goals and three assists in 19 games), and with the departure of Pratto and a few injuries to the team, he started to become a more regular starter. In any case, at this point he had more confidence from Gallardo than the River Plate fans, who still looked at him with scepticism.

Gallardo explained why he had given him a starting place against San Pablo in a crucial group stage clash (2-2), where the striker scored a goal and provided an assist: “He is a player that coaches love for his quality, for his generosity, and for his playfulness. Any coaching staff would love to have him. He’s very young and has a long way to go”.

Álvarez became a regular starter for the River after the pandemic, playing most often as a striker, sometimes as a centre-forward, and sometimes as a second striker.

It was he who led (a goal included) a very youthful River team to a 1-1 draw in La Bombonera against Boca against Carlos Tévez and other stars, versus whom they would end up falling on penalties.

A few months later, he scored in another epic contest, when River, with multiple absentees and former Benfica midfielder Enzo Pérez as goalkeeper, defeated Independiente Santa Fe of Colombia to reach the round of 16 of the CONMEBOL Libertadores 2021.

A noteworthy achievement of Marcelo Gallardo at River was the conquest of a local league championship (in addition to the international titles he had won three times the Copa Argentina) but the start of Torneo LPF 2021 was not an impressive one.

During the first seven games (W3 D2 L2), Álvarez featured in six, with just two in the starting XI and scored only one goal. With River already out of the CONMEBOL Libertadores after losing to Atlético Mineiro, Álvarez scored in the 2-0 win over Aldosivi played on 27 August of this year.

From then on though, the player’s performance would increase exponentially.

With Matias Suarez’s injury confirmed, River had selected Braian Romero and Álvarez for the remaining games of the season. The question was whether Romero, who had recently joined from CONMEBOL Sudamericana champions Defensa y Justicia, and Álvarez himself were up to the job.

In the following match, River traveled to Rosario to take on struggling Newell’s, who still had former Liverpool player Maxi Rodriguez and former Millonario striker Ignacio Scocco. It was there where Álvarez delivered the first of his big performances of the season: two goals and two assists helped his team beat “Los Rosarinos” 4-1 and add the second of eight wins in a row that made them the main candidates for the title.

Against Arsenal at home, Álvarez and the rest of his teammates came up against Sarandi’s wall – attempting 24 shots to their opponents four and only scored in a fortuitous play at the end of the match (1-0).

In the midst of some doubt that his previous performance against Newell’s had been a one-off, Álvarez once again scored and assisted in the win over Central Córdoba, arriving at the Argentinean superclásico in the best possible form.

River, thanks to Marcos Rojo’s well-deserved red card, dominated Boca at times, with an exceptional Alvarez netting both goals: the first a brilliant solo effort via a mazy run and long-range shot, before capping a great team move by scoring the second. A new River hero was born.

Álvarez’s high level of performances continued with a hat-trick against San Lorenzo, an assist in the key win against title-rivals Talleres and another goal and assist in the win against the tricky Argentinos Juniors coached by former Barcelona Gabriel Milito.

He did not score in the draw in La Plata against Estudiantes but compensated with four goals in the 5-0 home win over Patronato. After scoring in the narrow win over Platense, he scored twice in the 4-0 against Racing, on a night that drove the whole Avellaneda defence insane allowing River to win the league championship that Gallardo had been missing.

After winning the championship, River relaxed a bit and drew away from Rosario Central (2-2), lost a difficult game with in-form Defensa y Justicia (2-3) and drew against Atlético Tucumán (1-1), with their young star scoring their only goal.

Álvarez’s final appearance of 2021 came on December 18, with two goals and an assist in a fantastic display during River’s win over Colón in the LPF Champions Trophy, a Super Cup match played by the league and League Cup champions.

Alvarez’s unstoppable form across these final 16 matches saw him become both a scorer (19 goals) and a creative force (seven assists, with 41 chances created) – his dribbling talents causing opposition sides many issues.

Even though he played in a single game during the Copa América – the 4-1 win over Bolivia, it was enough for him to go down as one of the players who won a major tournament with Messi. It is even more remarkable if we consider that just three years earlier Alvarez was just one of the sparring partners (young players who train with the senior national team) of Messi, Mascherano, Agüero and company in Russia 2018.

Álvarez has since become a regular in Scaloni’s squad, and he appeared in the second half of the recent 0-0 World Cup qualification draw with Brazil in San Juan.

It was reported in the Argentine press that Álvarez had passed up offers from MLS at the end of 2020 and mid-2021. These reports stated that the player was in no rush to move to another club, although River will find it difficult to keep him if he continues to perform as he has over the past few months.

As Álvarez continued to score and provide assists, bigger clubs with bigger wallets became interested in signing him: in mid-October, there were rumours of Fiorentina, in the early days of November, it was AC Milan, and in December, it was Real Madrid who were rumored to finally sign him.

Some critics point out the same issues that surfaced with Lautaro Martínez at Racing before he transferred to Inter: performing in the local championship but not proving decisive at the same level in the CONMEBOL Libertadores and even when he played against Brazil with the national team.

No matter what, there seems little doubt that Julián Álvarez will be playing for a European team within the major leagues in the coming years. A move in January could prove risky with a possible place in the Argentinian squad at the 2022 World Cup at stake next December – but that risk could be worth taking for the 21-year-old.