Another Sting in the Scorpions’ Tail? | The Analyst 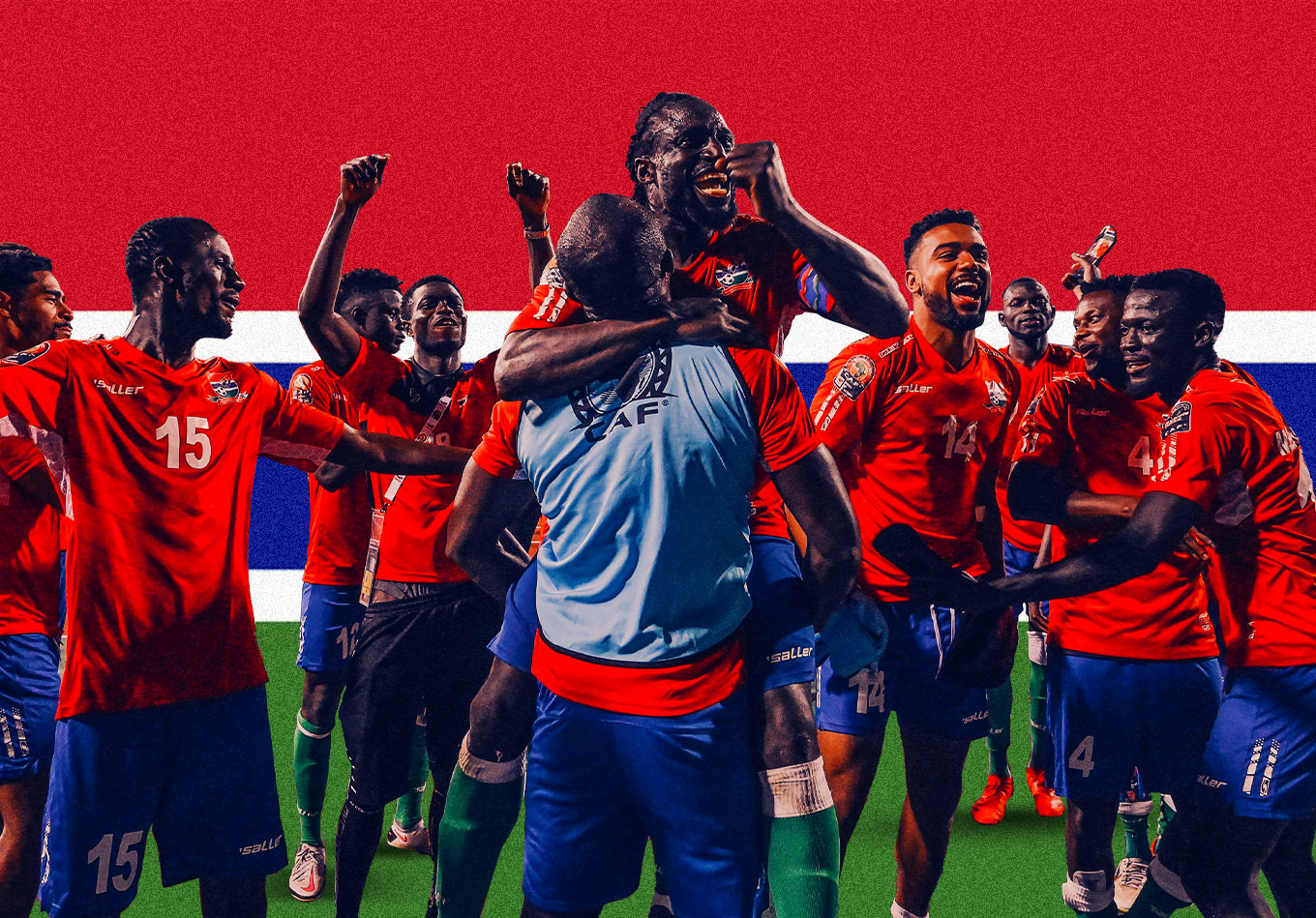 The Gambia came into AFCON 2021 as the underdogs. They’ve surpassed expectations so far, but could they provide yet another shock and defeat host nation Cameroon to take the debutants to the semis?

Minutes before The Gambia played arguably their most important football game in history against Guinea, at the round of 16 stage of the ongoing AFCON, head coach Tom Saintfiet was instilling a great sense of belief into his players.

In the dressing room of the Stade Omnisports de Bafoussam, Saintfiet was seen urging his players to further enhance their status and keep on writing history. Even a word from a CAF official could not stand in the way of the speech from the Belgian coach. The message, as clear as daylight, and filled with passion and desire saw Saintfiet firing up his players to grab a spot in the last eight.

His speech worked the trick as the West Africans booked their spot in the quarters with a 1-0 victory over the much-fancied Guinea. While the continent has largely tagged the Gambians as underdogs, the Belgian has instilled a great sense of belief in his players to perceive themselves as favourites going into every game. Up next is the litmus test for Saintfiet’s men who seek to continue their journey in the continental showpiece.

On the Brink of More History

Constituting part of the lowest-ranked teams on the continent, the Scorpions had to go through the preliminary round where they oversaw the challenge of Djibouti – winning 3-2 on penalties after a 2-2 aggregate score.

The qualification process was equally as nail-biting as The Gambia topped a group with Gabon, DR Congo, and Angola. A 3-1 victory over Angola in Luanda was The Gambia’s first-ever competitive away win in football. That win set the pace for the Scorpions, who ended up level on points with Gabon. The pair had 10 points each and were level on five tiebreakers. In the end, The Gambia’s overall goals scored did the trick that saw them qualify for their first-ever AFCON tournament.

The Gambia, ranked 150th in the world, qualified to the continental football festival in Cameroon as the lowest-FIFA ranked team ever. Expectations were well and truly low. The Scorpions were pitted in Group F alongside 2004 winners Tunisia, runners up in 1972 Mali and Mauritania.

The Scorpions qualified as runners up from Group F with seven points from a possible nine. The Gambians beat Mauritania and Tunisia, whilst sharing the spoils with Mali. They became the fifth debutant in the history of the AFCON to go past the group stages of the competition.

AFCON Debutants since the 1990s:

Saintfiet has led the hungry Gambians to want more, and they’ll need it when they face hosts Cameroon in Saturday’s quarter-final.

The Gambia could become the first debutant since the turn of the century to reach the semi-finals of the AFCON. There is more history to be made as the Scorpions will seek to become the first country since South Africa in 1996 to win the AFCON on the first try.

A Pragmatic Approach That Yields Results

The Gambia’s journey in Cameroon has been incredible. They don’t play the most attractive football, but they get results. Since Saintfiet took charge, he has aligned the team to be streetwise and punch clever.

In the past, the Scorpions placed a premium on playing mouth-watering football. The emphasis was placed on slick passing and movement whilst committing bodies forward. Fans enjoyed it but there was no end product to show as they were on the losing side for most of these games.

Saintfiet, a coach with more than 10 years of coaching experience in African football, decided to switch things up and make the West African country a more result-oriented team. This method has worked wonders for the Belgian coach at the AFCON with his side yet to concede an open play goal.

The team is set in a compact nature, dropping deep and blocking up spaces. They have only had eight high turnovers all tournament (the lowest of any side) and they start their open play sequences on average just 33.8m from their own goal-line, which is the deepest of any side in Cameroon.

It is evident that The Gambia’s style is not to apply a high press as none of the eight high turnovers have come close to the opposition goal – just one of the turnovers resulted in a shot.

Despite the emphasis on keeping a low block, The Gambia have allowed their opponents a non-penalty expected goals total of 4.76 in the tournament so far, with the only goal they have conceded coming from the penalty spot.

Conceding 75 shots which accumulates to an XG of 4.8 without conceding could mean either the Scorpions have been lucky or their goalkeeper has been brilliant. Saintfiet has called on two keepers this tournament with both Baboucarr Gaye and Modou Jobe playing 180 minutes each. The pair have together prevented 2.10 goals combined suggesting they have played a role in this Gambian defensive fortress.

Saintfiet’s desire to be resolute at the back has been made easier by the fact that his squad is dominated by six Italy-based players. Tactical discipline and defending are the main features in the playbook of Italian football.

Of course, playing deep will compromise the attack and The Gambia have not been as fluid as they were in AFCON qualifiers where they were averaging 1.5 goals per game. That figure has taken a hit as the Scorpions are scoring a goal per game in Cameroon.

Of the teams that are in the quarter finals of the AFCON, The Gambia are the team to have had the lowest quality non-penalty shots at AFCON (2.23 xG). With an average of 0.06 xG per shot, which is also the third worst at the tournament behind only Sudan and Mauritania (0.05 xG per shot).

The Gambia defend as a unit, but on the offensive, it is all about one man. Musa Barrow’s importance to his country has shot over the roof during this tournament with his scintillating performances. He is one of three Gambian players to have played every single minute of the tournament so far.

It comes as no surprise as the 23-year-old has been the talk of Serie A for some time now scoring five league goals this season for Bologna.

Barrow scored a crucial goal against Gabon in the qualifiers and has continued in the same vein in Cameroon. The forward has had 19 shots, while every other Gambian player has had 17 combined, Hiss effectiveness is proven contributing to seven of their 10 shots on target. The Bologna man has either scored (two) or assisted (two) every one of Gambia’s goals at AFCON 2021 – it has been the Barrow show.

Barrow has stolen the headlines, but his supporting cast have equally contributed to the team’s success. Ablie Jallow has also provided a threat going forward scoring two goals and creating three chances – the most by any The Gambia player. In midfield, Yusupha Bobb has been an effective tool of destruction consistently breaking up play. The Piacenza midfielder has won the most tackles (4), made the most interceptions (6), and recoveries (18) in the Gambian team this AFCON.

Cameroon Yet to Peak

Opta’s updated tournament predictions see Cameroon ranked fifth with just a 10% of winning the AFCON. Despite playing as hosts the indomitable lions have rarely roared. They are the only team remaining in the competition yet to keep a clean sheet and have conceded in each game so far.

In the opening game against Burkina Faso, António Conceição’s men survived a scare after going down in the early minutes of the game. Lightning struck twice as the Indomitable Lions went behind again in the next game against Ethiopia – but this time the hosts made light work of the Walias. Cameroon failed to pull a rabbit out the hat in the final game, dropping points against Cape Verde after conceding again.

In the round of 16, Comoros played more than 80 minutes with 10 men after their captain Nadjim Abdou was sent off. Cameroon barely made the handicap count and squeezed a 2-1 win against a team that had left back Chalker Alhadhur in goal. Comoros still managed more shots on target against the hosts.

Cameroon’s leaky defence will be a major concern for Conceição heading into the quarter final against a very efficient Gambian attack. The five-time AFCON champions have so far conceded quality non-penalty chances (4.92 xG) which is more than their opponents the Gambia (4.76 xG) have this tournament – looks like Saturday will provide a very open game.

Although Cameroon have had defensive issues, there has been no problems as such going forward. The Indomitable Lions have scored nine goals in four games so far. This comes as no surprise looking at how much control they’ve had of games. Conceição’s team love to have the ball and have had the most open play sequences of 10 or more passes (51) in the tournament.

In the midst of Cameroon’s goal scoring festival has been Al Nassr forward Vincent Aboubakar. The bulky forward is having the tournament of his life as he remains the only player to score in every game so far at the AFCON. His tally of six goals sees him become the first player since 1998 to score more than five goals at a single AFCON.

The 30-year-old forward has surpassed Samuel Etoo’s record (five) of the most goals scored by a Cameroonian at an AFCON tournament. Aboubakar will still have his eyes on the ultimate which is Pierre Ndaye Mulamba’s record of nine goals for Zaire at the 1974 AFCON hosted in Egypt.

So far, Aboubakar leads in shots (19), shots on target (10), goals (six), and chances created (five) for Cameroon at the AFCON. If the hosts are to go all the way, the numbers do suggest Aboubakar could be on his way to leaving a mark in African football history.

But first, he will have to try to be the first player to breach a resolute Gambian defence from open play at this tournament.

Frenzy in The Gambia

There has been a party since Saintfiet’s men knocked out Guinea in the round of 16. The decibels racked up from The Gambia, the smallest country on mainland Africa, could probably be heard by neighbouring countries and beyond. It has been weeks of joy for the 2.4 million people of Gambia. In The Gambia everyone loves football and everyone plays football. Before the tournament, there were public concerns surrounding Saintfiet’s selection criteria and style, but who cares now?

The Gambia is usually referred to as ‘the smiling coast’ because Gambians are extremely friendly people. Everyone in the country whether friends or complete strangers always have a smile. That smile is definitely wider than with the exploits of the Scorpions at the AFCON.

In the animal kingdom, the battle between a scorpion and a lion will be very straightforward. The lion especially if it is an indomitable one can crush the scorpion in a million ways but there is one way the scorpion could pull a surprise, and that’s when the lion is vulnerable. There will be hope for The Gambia when they face Cameroon because the hosts won’t be playing in Yaoundé – a city they have been unbeaten in for 33 years. The Scorpions make the 271km trip from Bafoussam to Douala for the quarter-final tie.

The Gambia will have their names written in the folklore for the 2021 AFCON but knocking out the hosts will ensure that no one misses that tiny strip of land that stretches into the south of Senegal the next time they look at the African map.