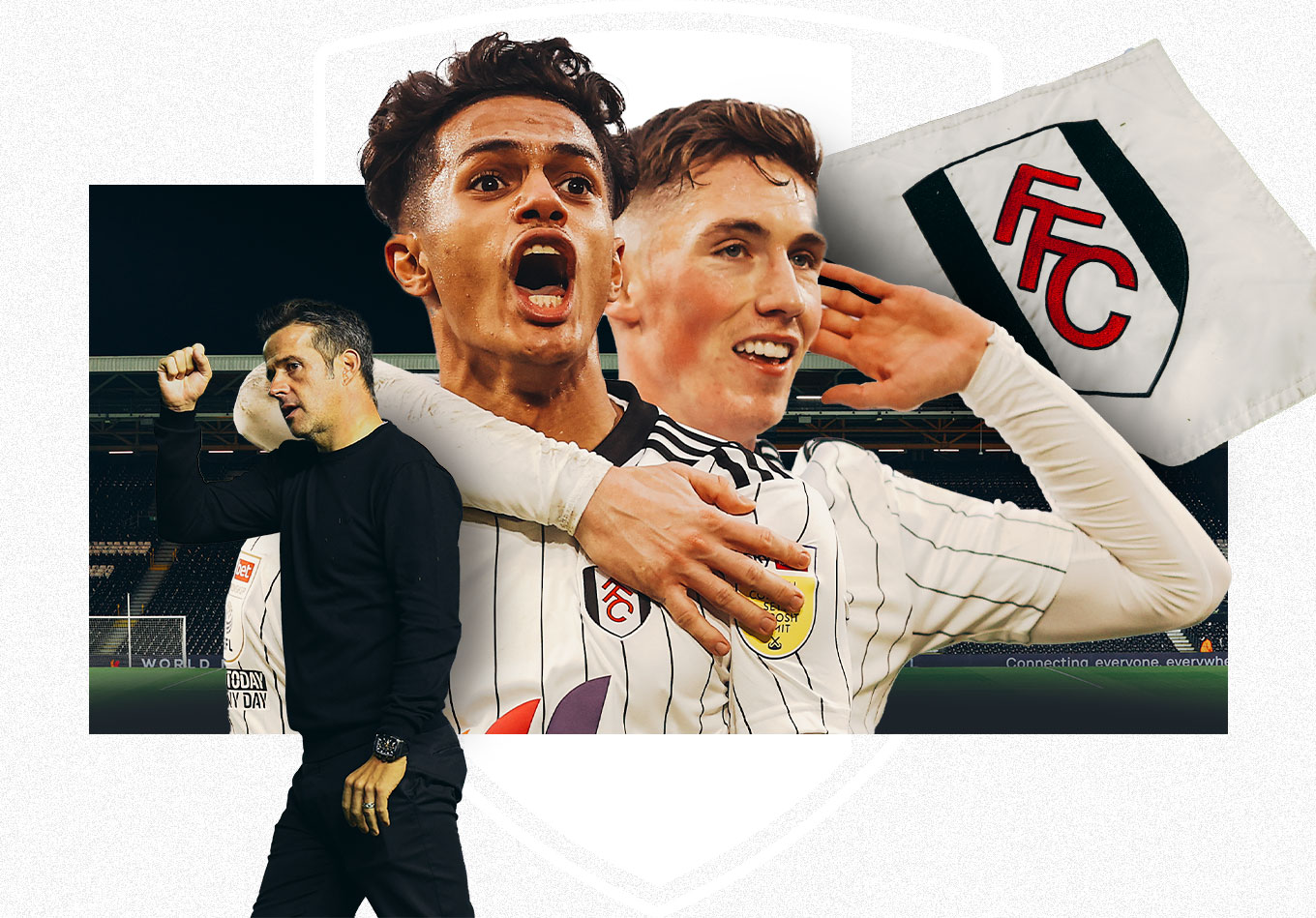 Fulham scored their 65th goal of the Championship season last night, and just for good measure added a 66th, 67th, 68th, 69th and 70th. Marco Silva’s side are on course to score an astonishing tally of goals in the 2021-22 league season, but how special could their accomplishments be? We’ve looked back at the historical records across the English Football League since 1888 to see the potential targets for the south-west London club to hit.

Fulham’s tally of 70 goals is by far the most across the professional leagues in England so far this season. It’s 15 ahead of Liverpool and 26 more than the next highest-scoring Championship club, Blackburn Rovers (44). Marco Silva’s side have also unsurprisingly created the best chances per game both overall (2.22 xG) and from non-penalty shots (2.07 xG) in the Championship this season.

With them benefitting from three own goals, Fulham players have scored 67 of those goals from an expected goals total of 57.8, with their overperformance of 12.2 also being the highest across the top four tiers in England as it stands.

The Whites are the first team in England to score 70 or more goals in 26 league games since Manchester City in the 2017-18 Premier League (74), while they are the first to do so in the second tier of English league football at this stage of a season since Sheffield Wednesday in 1958-59 (74) – a good omen for Fulham is that both of those sides went on to win the league.

They tally is someway off the all-time English league record for most goals in the opening 26 games of a season, however. 26 goals off, to be exact. That record is held by Birmingham City in 1893-94, with 96 goals in 26 matches.

14 different Fulham players have scored a goal in the Championship this season – the highest tally of scorers by a team in the second tier, but outdone by Chelsea (16), Manchester City (16), Fleetwood Town (16) and Liverpool (15) across the top four tiers.

Of course, the main source of those goals has been Aleksandar Mitrovic, with the Serb scoring 27 Championship goals this season and currently the highest-scoring player across the top four tiers in England. More on Mitrovic later…

What a Way to Start the Year

Fulham’s three Championship matches in 2022 so far have seen them beat Reading 7-0 away, followed by back-to-back 6-2 wins at Craven Cottage against Bristol City and Birmingham City.

Winning consecutive league games 6-2 is obviously rare, but Fulham’s feat was the first time it’s happened in English league history in just over 60 years, since September 1961:

One for the tennis ultras:
Fulham are the first English team to win 6-2, 6-2 since Burnley did it in September 1961 pic.twitter.com/nIKaFw1ZPn

Fulham’s three wins in January have come over the space of just eight days – this is the quickest period that an English Football League club have scored six or more goals in three competitive games in history, beating the previous record set by Arsenal across 11 days between October and November 1932.

So, how ridiculous could Fulham’s January get? They have two more Championship games scheduled in the month: away to Stoke City and at home against Blackpool. If they score six more goals across these two matches, they’d be the first team to score 25 or more goals across a single month of action in the second tier of English league football since Bolton Wanderers in September 1964 (28), while the last team to score more than 20 goals in the second level across a single month were Watford in April 1996 (22).

The English Football League record for goals in a single month? That would be Chester in February 1936, who scored 32 goals. Fulham would need to score 13 goals across those two matches versus Stoke and Blackpool to match this tally, but ridiculously, it can’t be ruled out with their current form.

6 – Fulham are the first English second tier side to score 6+ goals in three consecutive league matches since Everton back in February 1954, with the Toffees going on to be promoted at the end of that campaign. Mesmeric. https://t.co/qfp0Fm0Cec

Fulham’s 70 goals from 26 games is great, but they still have 20 Championship games remaining this season – how impressive could it get by the end of 2021-22?

At their current rate of 2.69 goals per game, Fulham could end up with 124 goals after the whole 46-game Championship campaign. Should they do that, they’d beat the English second-tier record of 122 goals, currently held by title-winning Middlesbrough in 1926-27, although that tally came across 42 matches.

The last second-tier English league club that posted a goal tally of at least 100 were Manchester City in 2001-02 under Kevin Keegan, with City scoring 108 goals in 46 matches that season – Shaun Goater helping himself to 28 of those.

Before that, Bolton Wanderers hit 100 goals exactly in 1996-97 on the way to the league title, while Southampton in 1963-64 and Ipswich Town in 1960-61 also scored 100 goals in their 42-game seasons within the second tier. Spare a though for Saints, though – their 100 goals only helped them finish fifth that season.

The all-time English Football League record for goals by a team in a single season is held by Peterborough United in their fourth-tier title-winning campaign of 1960-61, with the Posh scoring an incredible 134 goals in 46 games.

Aston Villa scored 128 goals in the English top-flight in 1930-31 across 42 matches, but this still wasn’t enough to hand them the title, losing out to Arsenal, who scored one goal fewer (127).

In terms of goals per game, Small Heath’s (aka Birmingham City) title-winning 1892-93 season saw them score 90 goals in just 22 games – the only team in English league history to average at least four goals per game (4.09). Small Heath went on to lose a test match against Newton Heath (aka Manchester United) at the end of that season, meaning they were to remain in the second tier despite winning the title. They then followed this up in 1893-94 with 103 goals in 28 matches at a rate of 3.68 goals per game (the second-highest average ever) but astonishingly lost out to an unbeaten Liverpool, who only scored 77 times. Goals don’t always win titles.

Fulham’s current goal difference of +47 is impressive, but to match an all-time English Football League record they’ll need to get this to +85 by the end of the season. That record is held by Bradford City in 1928-29’s Third Division North, while the second-tier record is held by Liverpool in 1895-96 (+74).

The Whites’ current club record for goals within a single English Football League season stands at 111 in 1931-32’s title-winning Third Division South campaign – one of only two occasions that they’ve reached a century of goals in a single league season, alongside 1928-29 (101) in the same competition.

Fulham’s promotion-winning Championship season in 2017-18 saw them score 79 times (excluding playoffs) – fewer than the season before (85 goals) when they eventually lost out in the playoffs to Reading. Their last title-winning campaign in 2000-01 saw them score 90 league goals – a tally that they’ll now only need to average a goal a game to replicate this time around.

As mentioned earlier, Aleksandar Mitrovic’s 27 goals have contributed towards 38.6% of Fulham’s entire league tally so far in 2021-22 and he’s still got 20 possible games to add more to this tally for the club in the Championship this season.

The Serbian has scored in 17 of his 25 Championship appearances this season, with three hat-tricks already – including a treble versus Bristol City in the 6-2 victory at Craven Cottage last weekend.

Ivan Toney hit 31 goals in 45 games last season in the Championship for Brentford – 33 in 48 if you include the playoffs – and that was considered extraordinary. With Mitrovic now only three away from the 30-mark with us not even out of January, it looks likely that he’ll replicate, or even better, Guy Whittingham’s astonishing 42 goals in the second tier for Portsmouth back in 1992-93.

Mitrovic ended as Fulham’s top scorer in their promotion-winning 2019-20 campaign in the Championship, with 26 goals in 41 appearances including playoff matches – he’s already gone one better this season and looks set to fire the Whites back to the top-flight at the first time of asking following relegation from the Premier League last season.