Dušan Vlahović: The Next Phenomenon to Come to the Premier League? | The Analyst 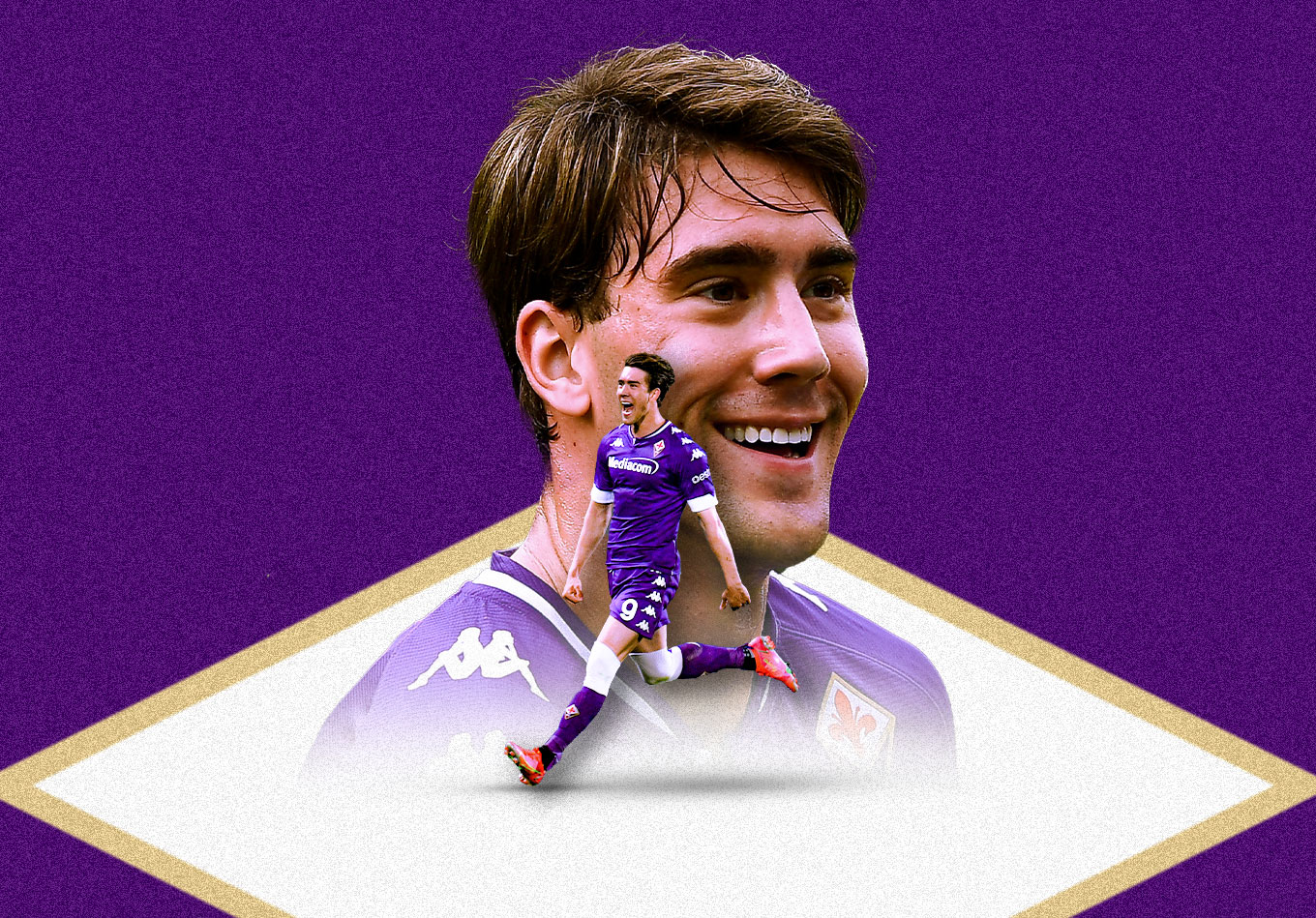 Dušan Vlahović: The Next Phenomenon to Come to the Premier League?

He’s been linked to various Premier League clubs over the last 12 months, but those links are getting louder by the day. Will Dušan Vlahović make his way to England in the next six months, and if so, what attributes will he bring to the Premier League?

“I am the Zlatan Ibrahimovic of Belgrade, I will play for the strongest clubs”.

Dušan Vlahović repeated this line week after week to his Partizan teammate Valeri Bojinov at training. Bojinov believed the big Serbian striker to be crazy. “Really crazy”, he said.

A few weeks later, the Bulgarian was already revising his opinion.

With Partizan trailing 2-0 at home at half time against Radnik on a balmy day in April 2016, coach Ivan Tomić turned to his bench and his highly rated 16-year-old striker. It was just Vlahović’s fifth appearance for the club, but he was already proving a menace for Serbian Super Liga defenders in his short time in senior football.

After eight minutes on the field, Vlahović had his chance. Nemanja Mihajlović was fed into space on the left-hand side of the penalty box. Vlahović, sensing his opportunity, peeled away to the far post. The ball across from Mihajlović with the outside of right boot had to be judged to perfection. It was. Vlahović moved away from the defender’s grasp, leapt and powered his header inside the post. In that moment that Vlahović became Partizan’s youngest ever goalscorer.

The next month, just five months after his 16th birthday, Vlahović replaced top scorer Bojinov with 20 minutes to go in the Serbian Cup final. Partizan were expected to win the final comfortably, but opponents Javor were providing a stubborn test. With time ticking away, Partizan were on the back foot but broke through Alen Stevanović on the right-hand side. Vlahović again sensed his chance, got free at the back post, and headed home a perfect cross in added time to grab the second in a 2-0 win.

“I told Corvino [Director of Football at Fiorentina] to sign him at 16,” said Bojinov. “Vlahović trains and works hard as if every match were a final. He is hungry, determined and willing.

“Now, he’s working towards that goal of becoming the heir to Zlatan Ibrahimovic.”

Five years on from the brash young striker that lit up the 2016 Serbian Cup final, this season, the protege Vlahović finds himself nine goals ahead of his idol Ibrahimovic in the Serie A goalscoring charts.

Indeed, in 2021 as a whole, only Robert Lewandowski (43) has more goals in league competition than the Serb (33). Vlahović also equalled Cristiano Ronaldo’s Serie A record of goals in a calendar year with his goal against Sassuolo in December.

Since moving to Fiorentina in 2018, Vlahović has netted 47 times and at the age of just 21, is already competing alongside some of Europe’s best and being compared to legends.

One stylistic comparison that is tough to dismiss is one with Italian World Cup winner and former Fiorentina striker Luca Toni.

Tall, powerful sharpshooters, both Vlahović and Toni are exceptional at using their large bodies to generate space from defenders and using their deadly ball-striking ability to leave goalkeepers hapless. Both possess intelligent movement, a nous for knowing where to be in the box, quality finesse in their touch and a forceful desire to be first to a loose ball.

Where Vlahović does have the upper-hand on Toni is in his long-range shooting ability which he seems to have taken from his hero Ibrahimovic.

But along with the whipped long rangers, Vlahović scores all types of goals: first time snapshots, well-taken placed strikes, predatory tap-ins, beautiful headers, free kicks, penalties, with his xG inside the box even more efficient than outside, scoring nine non-penalty goals in Serie A this season from within the box, from an xG of 5.7. In 2020-21, the Serbian striker scored 14 non-penalty goals from inside the box from shots totalling 13.3xG, so this season has seen an uptick in close range conversion so far.

Though away from his goal scoring prowess, there are things that Vlahović needs to work on.

In possession and when linking play, he needs to be tidier. In the penalty box Vlahović’s first touch is usually excellent, but when back to goal it can be heavy and his passing sloppy. His 71% pass competition is worse than league average, and only five players to have attempted 300+ passes in Serie A this season have averaged lower. In fact, all of Fiorentina players this season, Vlahović is involved in the fewest open-play sequences per 90 minutes at 27.4, showing that he’s not really involved in his side’s build up play.

However, with more direct shot involvements (i.e where his only involvement in an open-play sequence is taking the final shot) than anyone else, it’s clear to see what his role in the team currently is. Across 2021-22, 9% of his open-play sequence involvements (46/516) have seen his only involvement being the shot – of players to have played 1,200+ minutes in Serie A this season, the only two to have a higher ratio are Andrea Pinamonti at Empoli (11.7%) and Ciro Immobile at Lazio (9.5%).

That said, it’s important to consider his age and the style of football he plays. At 21, he’s far from the finished product and his frame has not finished filling out. It’s expected that at 6-foot-3 and 75 kg he’ll be a little untidy – just like 6-foot-4, 88 kg Erling Haaland who has an almost identical pass completion ratio to Vlahović.

Pressing too is something that has not been asked of him yet. Fiorentina manager Vincenzo Italiano’s role for Vlahović when out of possession instead is to cut the passing lanes off and preserve energy, while the likes of Giacomo Bonaventura, José Callejón and Nicolás González will initiate the press. So, it is potentially something Vlahović can do, though we’ve not seen it.

Yet, if Vlahović is to succeed at some of the clubs he’s touted to join, these are two sides of his game he’ll need to improve and learn. It’s almost certain that Vlahović will leave Fiorentina in January or the summer. The Serb made it clear he will not be signing an extension to his contract that runs out in 2023 and that, along with his goalscoring numbers, has put Europe’s biggest clubs on high alert.

Tottenham, Manchester City, Arsenal and Newcastle are the frontrunners according to the bookies, and a Premier League move would suit his physical attributes. It’s also almost the only league that will be able to afford his touted €70m asking price. But to make it at somewhere like Manchester City, Vlahović will have to become tidier in possession and work more for the team.

It’s also important to express caution when it comes to those topping the Serie A goalscoring charts. In the past five years, the only Serie A goal scorer who has been able to truly better himself away from Italy is Mohammed Salah. Mauro Icardi, Ciro Immobile and Krzysztof Piatek all struggled, and even Cristiano Ronaldo and Romelu Lukaku have failed to replicate their Serie A form in England so far this season.

Dušan Vlahović is different though and offers all the raw materials that would make a top Premier League striker. His idol Zlatan Ibrahimović did a pretty good job of it in England too, even at the age of 35.

Vlahović met him in February 2020, posting this photo on Twitter:

You need to find someone to look at you in the same way that i look at Zlatan 🍼 @Ibra_official Dream pic.twitter.com/x7wJraZsC6

Before that game, he’d only scored six Serie A goals in 30 games. Since, he’s scored 37 in 67 appearances.

Whether something changed in Vlahović that day or not, it’s an amusing coincidence to see the uplift in form which will almost certainly lead to him keeping half the promise he made to Bojinov six years ago.

Now we wait to see if he can keep the other half so he can justifiably call himself the Zlatan Ibrahimović of Belgrade.