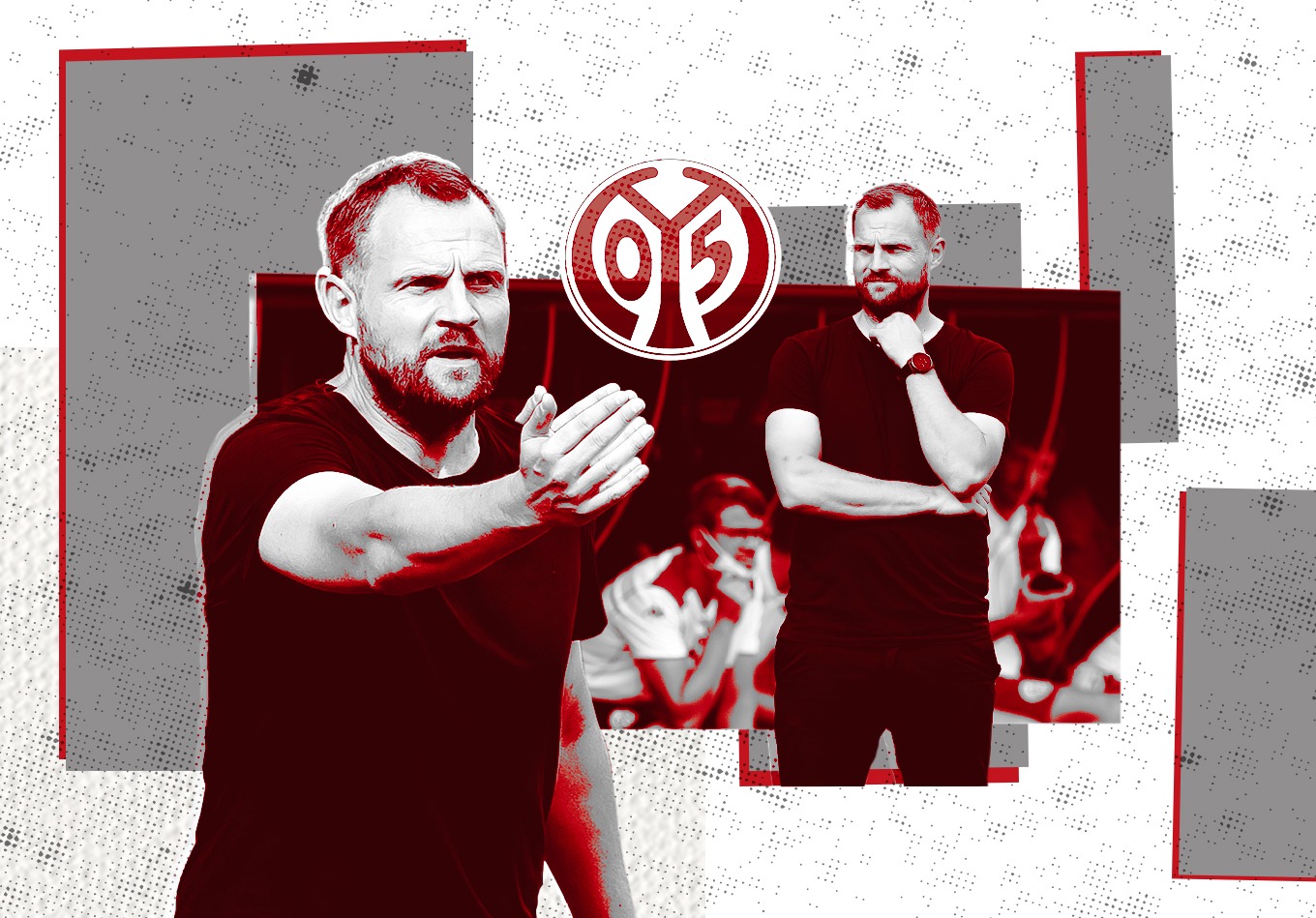 Bo Svensson arrived at Mainz just over a year ago with the Bundesliga club in crisis, having already sacked two coaches and facing relegation to the second tier. The Dane was an inexperienced gamble, but that gamble has paid off, with the Rhineland club going from strength to strength. Can he go on to replicate two of the clubs now-famous former coaches?

The Mainz 05 managerial conveyor belt boasts an illustrious pedigree, with Champions League winning managers Jürgen Klopp and Thomas Tuchel both beginning their esteemed careers at the club. Bo Svensson, the latest product of the famed coaching school, has displayed qualities that hint he may be capable of following in his predecessors’ footsteps.

The 42-year-old took the helm at Mainz in January 2021 with the club second-from-bottom in the Bundesliga table and on just six points – 10 adrift of automatic safety. It was only Svensson’s second managerial role after overseeing FC Liefering, Red Bull Salzburg’s feeder club, for the previous 18 months. But a tug at the heartstrings from Mainz – the side at which Svensson spent seven years as a player – was enough to persuade the ex-defender to make the switch to the Rhineland.

Mainz were only able to pick up one point in their remaining three games of the Hinrunde, meaning that they were faced with achieving a feat that no side in Bundesliga history had ever done before – avoiding relegation with just seven points from the first half of the campaign.

With his arrival at Mainz, the club had their fourth manager of the season, following the sackings of Achim Beierlorzer and Jan-Moritz Lichte, and one game in charge as interim coach by Jan Siewert. Svensson certainly had a job on his hands, with the club in 17th place and only two points above rock-bottom side Schalke 04.

With 31 goals conceded and just one clean sheet, they were in disarray at the back, but their problems also extended to their attack with the club underperforming their expected goals total by a league-high 7.3. Astonishingly, they’d created better goalscoring chances (21.3xG) than Bayer Leverkusen in third place (18.2), but without finishing those chances, they were in danger of dropping into the second tier.

Once appointed, the Dane opted to shift from Mainz’s typical four-at-the-back system to a 3-4-1-2 – the formation he deployed whilst at Liefering, Svensson making no secret of the fact that the change in system was primarily to plug the gaps in a severely leaky defence.

In the 14 matches prior to Svensson’s arrival as coach, Mainz conceded at least three goals in six of them – seemingly self-volunteering as the Bundesliga’s whipping boys. However, Svensson’s switch to three in defence offered additional cover and protection in central areas and helped to make the Mainz backline much tighter.

With the shrewd signings of Dominik Kohr and Danny da Costa, Svensson was able to put a halt to their disastrous defensive record. In the 20 games following his appointment, Mainz conceded just 25 goals – the third-best defensive record in the competition behind only VfL Wolfsburg (22), Bayern Munich (25) and RB Leipzig (25). Mainz went from allowing their opponents 1.92 xG per game in their opening 14 matches of the campaign to just 1.30 per game in the 20 games under Svensson.

Matchday 18’s fantastic 3-2 home win against high-flying RB Leipzig set the tone for the best Ruckrunde in the club’s history. This victory saw them come from both 1-0 down and 2-1 down to eventually seal all three points and start a fantastic run of form.

Mainz collected 32 points from 17 matches in the second half of the 2020-21 campaign under Svensson, a tally that only three teams could better, while only champions Bayern Munich lost fewer matches (two) than the 05ers (three). Only one of those defeats came in their final 11 games of the season, giving them a comfortable 12th place finish and avoiding the dreaded drop by a margin of eight points. Had they been able to replicate that form in the first half of 2020-21, Mainz would have secured enough points for a possible third-place finish & Champions League football.

Undoubtedly Mainz’s most memorable scalp in the latter stages of last season was that of record champions Bayern Munich, with the Bavarians visiting the MEWA Arena in need of a victory to secure the title. However, Hansi Flick’s side were outrun and outsmarted, trailing 2-0 inside 37 minutes, thanks to goals from Jonathan Burkardt and Robin Quaison. Bayern dominated possession for the remainder of the match, but it wasn’t until injury time when Robert Lewandowski fired in a late consolation, that Mainz’s defence was breached by the champions’ world class attack.

If there was a win to emphasise the impact that Svensson had had on Mainz, it was this one. In the first match of 2021, before the Dane’s arrival, Mainz had raced in to a 2-0 half-time lead against Bayern away from home in the Bundesliga but wilted and eventually succumbed to a 5-2 defeat.

Mainz currently find themselves in the top half of the Bundesliga this season, in ninth place – but they are only five points away third placed SC Freiberg ahead of the return following the winter break.

With a balanced record of seven wins and seven defeats (plus three draws), Mainz are in a much better position than at this stage last season, thanks to Svensson’s coaching. At the halfway point of 2021-22, they have collected 17 points more (24) than they had last season (seven).

Their opening game of the season against RB Leipzig came in chaotic fashion, with 12 first team squad members in quarantine due to a Covid-19 outbreak inside the Mainz camp. Nevertheless, with eight members of the Carnival club’s reserve side in the squad, they defeated last season’s runners-up 1-0 at the MEWA Arena. With only 28% possession, Mainz were clinical on the counter-attack and made the pitch extremely compact when Leipzig had the ball.

Having a lack of possession has been a common theme for Mainz under Svensson, and something they’ve been able to utilise in their favour. Since his arrival last January, only two clubs have averaged a lower possession figure (42.1%) and successful passes per game (254), but they look to pounce on the opposition when they have possession in their defensive third of the pitch.

Since Svensson took over at Mainz, they have tallied the fifth-most high turnovers (336) and the fourth highest tally of shots from high turnovers (53). In the months of 2020-21 before the Danish coach arrived, Mainz averaged 7.1 high turnovers per game – less than the 9.1 average under his management. Svensson has installed stringent standards upon his players, as he expects tireless pressing and incisive passing when they do have possession. In fact, he can often be seen throwing his arms in frustration on the touchline when his side do not move the ball forward quickly enough.

Mainz have once again proven to be a very effective defensive unit, conceding the second-fewest goals in the division so far (17) and only one fewer than both Bayern Munich and Freiberg (16), who are both in the top three of the Bundesliga. Astonishingly, with six clean sheets in 16 matches, they already have more than in the entire 2020-21 campaign (five) – and no club has kept more this season in the competition.

Their fantastic defensive record this season stems from their ability to stop opposition sides from having good quality chances. Only Bayern have allowed the opposition a lower non-penalty expected goals total (14.9) than Svensson’s side (16.1), while the average xG of a shot allowed by Mainz this season is the lowest in the Bundesliga (0.08). When opponents do get a chance against Mainz – only three clubs have faced fewer non-penalty shots than them (193), they aren’t good quality on average.

Head of Sports at Mainz, Christian Heidel, was at the helm of the club during Klopp and Tuchel’s managerial stints. Yet has put last year’s success completely down to Mainz’s manager. He said: “Svensson has complete freedom. The coach is the king of the dressing room – that’s our philosophy. He can do what he wants and what he thinks is right.”

Svensson has seen his stock rise astronomically since moving to the Rhineland – and for good reason. The 42-year-old played for the club under the tutelage of both Klopp and Tuchel, but the student has now become the master. In 37 Bundesliga games in charge of the Carnival club, the Dane has amassed 57 points – giving him an average of 1.54 points per game.

In comparison, Tuchel had a points per game average at Mainz of 1.41, whilst Klopp boasted just 1.13 points per game as head coach of the club. By no means is that a comparison of their current abilities as managers – Svensson would be the first to dismiss that claim, stating that he was ‘able to learn from both when he was a player at the MEWA Arena. But it suggests that the school of coaching may just have one more alumnus capable of becoming a big managerial success on the continent.