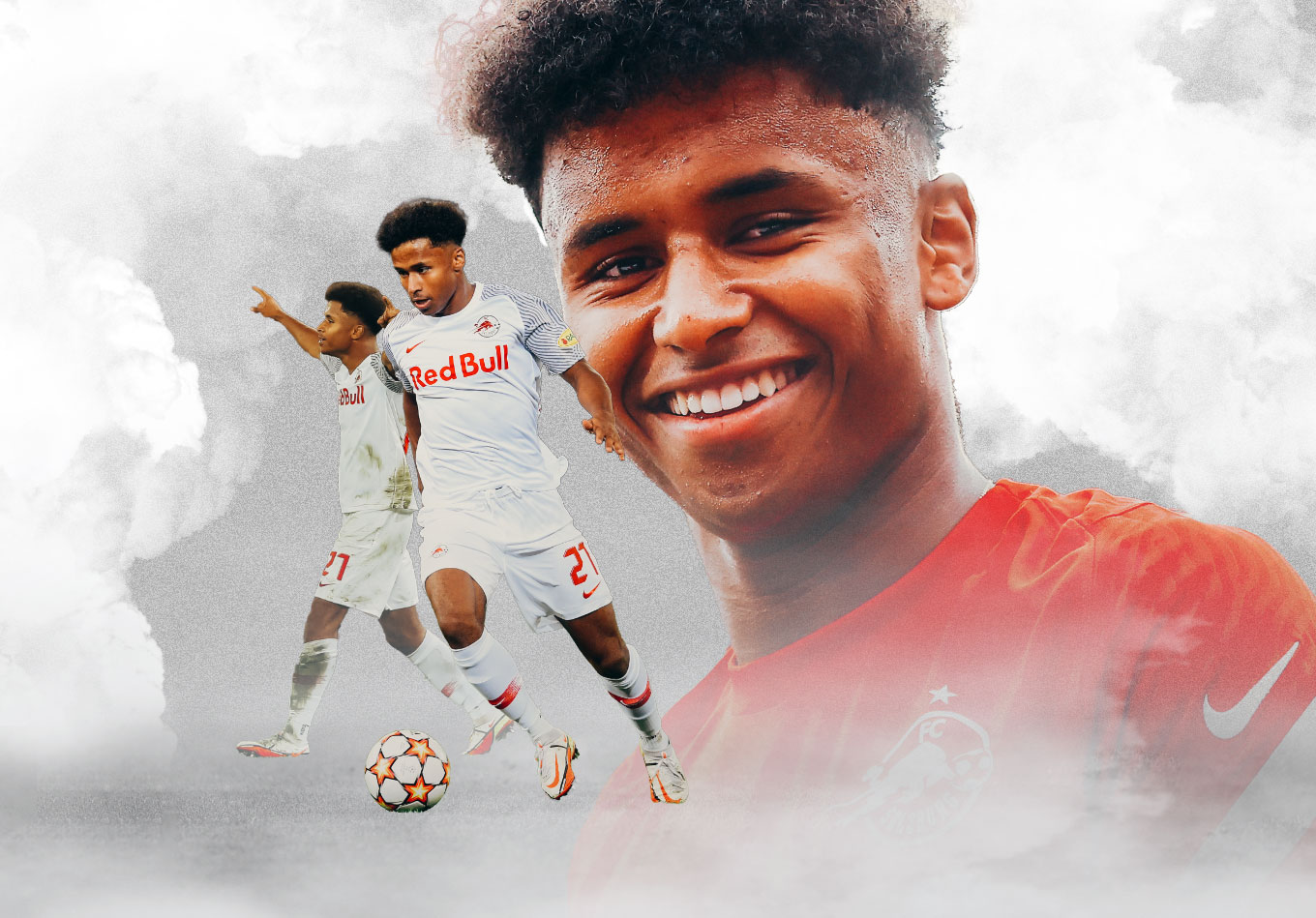 Picking up the ball just outside the area, Florian Wirtz takes a touch and moves the ball to Karim Adeyemi who, spotting the space behind him, delicately flicks the ball back to Wirtz to run on to.

Adeyemi spins and darts towards goal, glancing towards Wirtz, expectant of the return pass. The Leverkusen man obliges, zipping the ball into Adeyemi’s path, who takes a touch and slots into the bottom corner, selling the ‘keeper in the process.

It was Karim Adeyemi’s first goal for his country, a meaningless one in some respects – the last in a 6-0 demolition of Armenia in World Cup qualification – but a goal that introduced himself to a German public that’s likely to be salivating over him for the next decade.

Red Bull Salzburg’s talent factory has been presenting the big leagues of Europe with ready-made footballers since 2014.

Sadio Mané was the prototype, joining Southampton for £3.6m, and he was quickly followed by Kevin Kampl who joined Dortmund, Martin Hinteregger who went to Augsburg, Felipe Pires who signed for Hoffenheim, and Marcel Sabitzer, Péter Gulácsi, Benno Schmitz, Bernardo, Stefan Ilsanker, Dayot Upamecano, Konrad Laimer and Naby Keïta who all flew the nest to RB Leipzig. And that’s before we even mention Erling Haaland.

Today, the factory is working to its peak. Since the summer of 2017, 16 more players have left Salzburg to join a big five European league and almost all of them have become key players for their sides. As the winter transfer window approaches, Europe’s biggest clubs will be looking to make Karim Adeyemi the latest gift to come off the ceaseless Red Bull production line.

Operating as one part of a front two, the 19-year-old German has 15 goals in 26 games this season with Salzburg, with three coming in the Champions League group stages.

If we were to compare those surface-level level stats to those of his two striking predecessors, Adeyemi matches up favourably: Patson Daka only scored one goal for Salzburg before his 20th birthday while Erling Haaland smashed 29 in 27 games before moving to Dortmund at 19.

Adeyemi, though, is a different sort of striker. Employed best, Daka and Haaland are both strikers who love playing on the shoulder of the last man, using their pace and predatory instincts to score goal after goal. But there’s a little more nuance to Adeyemi.

Utilising soft feet, low centre of gravity and brilliance in tight areas, last season Adeyemi operated more like the supporting actor for Daka and Mergim Berisha ahead of him. The young German would come deep and get more involved in the play, and due to his silky touch, high IQ and eye for a pass, was able to play that role to perfection.

In the league in 2020-21, Adeyemi produced seven assists to go with his seven goals in 29 games. He ranked tied-sixth for assists in the league and registered an impressive 0.27 expected assists per game (tied for eighth-best), creating 30 chances from open play.

This season though, he’s played more like Haaland and Daka did before him. Adeyemi is much shorter at 5-foot-9 and considerably less of a physical presence compared to Daka (6’0”) and Haaland (6’4”), but he’s been able to take on the starring role at Salzburg with ease, playing on the last defender, using his electrifying pace to get in behind, and being that hungry predator that RB Salzburg need from their main man in the Austrian top flight.

This is clearly evidenced in his stats, and as a result, his assists have dropped considerably to just two in 25 games in all competitions, while in the league his xA has dropped to 0.19 per 90 and he’s only created 18 chances from open play.

However, Adeyemi’s goal tally has already eclipsed last season’s total by six in all competitions, while in the league he’s had 11 more shots, and an xG of 9.7 compared to last season’s 5.8 having played almost identical minutes. He leads the goalscoring charts with 11 in total, and only two players – have a better non-penalty xG rate per 90 than Adeyemi’s 0.64 (min 500+ minutes).

You can also see from his touch locations below that his touches have risen by about two per 90 in the final third and dropped by 7.4 in the middle and lower third.

It’s certainly impressive to see such a contrast of effective role-playing by one so young, and it’s certainly one of the reasons why so many clubs have been linked to his signature as the winter transfer window approaches.

RB Salzburg have been forthright with their assertions that the young German won’t be leaving this winter, at least publicly, but despite that, they have a history of losing their stars in January with Dominik Szoboszlai moving in January 2021 and Haaland moving the year before that.

Within the last month, Liverpool, Barcelona, Dortmund, and Bayern Munich have all been linked to his signature, while Red Bull staff will surely be pushing Leipzig as the destination of choice.

Adeyemi has spoken of his admiration of Dortmund in the past, telling Transfermarkt in 2020 that he is a “little BVB fan and like how they play, their philosophy,” while he did also spend time in Bayern’s academy between the ages of 8 and 10.

However, it’s Barcelona who are the club most widely rumoured to be close to securing his signature, and it’s a move that brings with it plenty of intrigue with the Xavi revolution ready to kick into gear.

Xavi has spoken at length about his willingness to re-establish ‘the Barcelona way’ at the Camp Nou and has reportedly told the Barca hierarchy to prioritise forward players in January. Should the money be available, Adeyemi would fit perfectly. His first goal for Germany was a perfect encapsulation of that, the give and go with Wirtz, and the finish. Soft feet, real intelligence, end product.

This type of quick interchange in the final third is what made Barca such a frightening outfit in the past, and it’s something that Adeyemi will bring bundles of, along with the ability to stretch the play by getting in behind. With Ansu Fati on one side and Adeyemi on the other flanking Memphis, it’s a scary prospect.

Yet Barcelona aren’t alone in looking like a perfect fit. If Liverpool are intending to freshen their front three, Adeyemi would be ideal in any position in that forward line. Should Dortmund look to move on from Haaland, they could do worse than looking at Adeyemi. Bayern too on paper seems to work perfectly, despite the riches they currently have at their disposal in the final third.

And that’s what makes Adeyemi such an exciting prospect, he isn’t just a role player, he’s a player who’d look good in most systems.

At this point, he’s not getting carried away with the rumours, “I’m very relaxed about it. I feel honoured, but nothing more,” he told Heute last month, and that’s what being at a club like RB Salzburg will do to you. You know you’ll progress when the time’s right, and you look to your predecessors and you see that so many of them have made the right move, that so many of them have succeeded in making that next step work.

When you look at the list of players who’ve left Salzburg for more glamorous pastures, it’s harder to spot the ones that didn’t make it than the ones who did. The Red Bull factory isn’t one that just produces ready-made footballers, it also packages them perfectly and delivers them almost flawlessly.

Karim Adeyemi is next. But which club will unwrap this latest Red Bull flavoured gift?