Airing It Out: The Games With the Most Passing Yards in NFL History | The Analyst 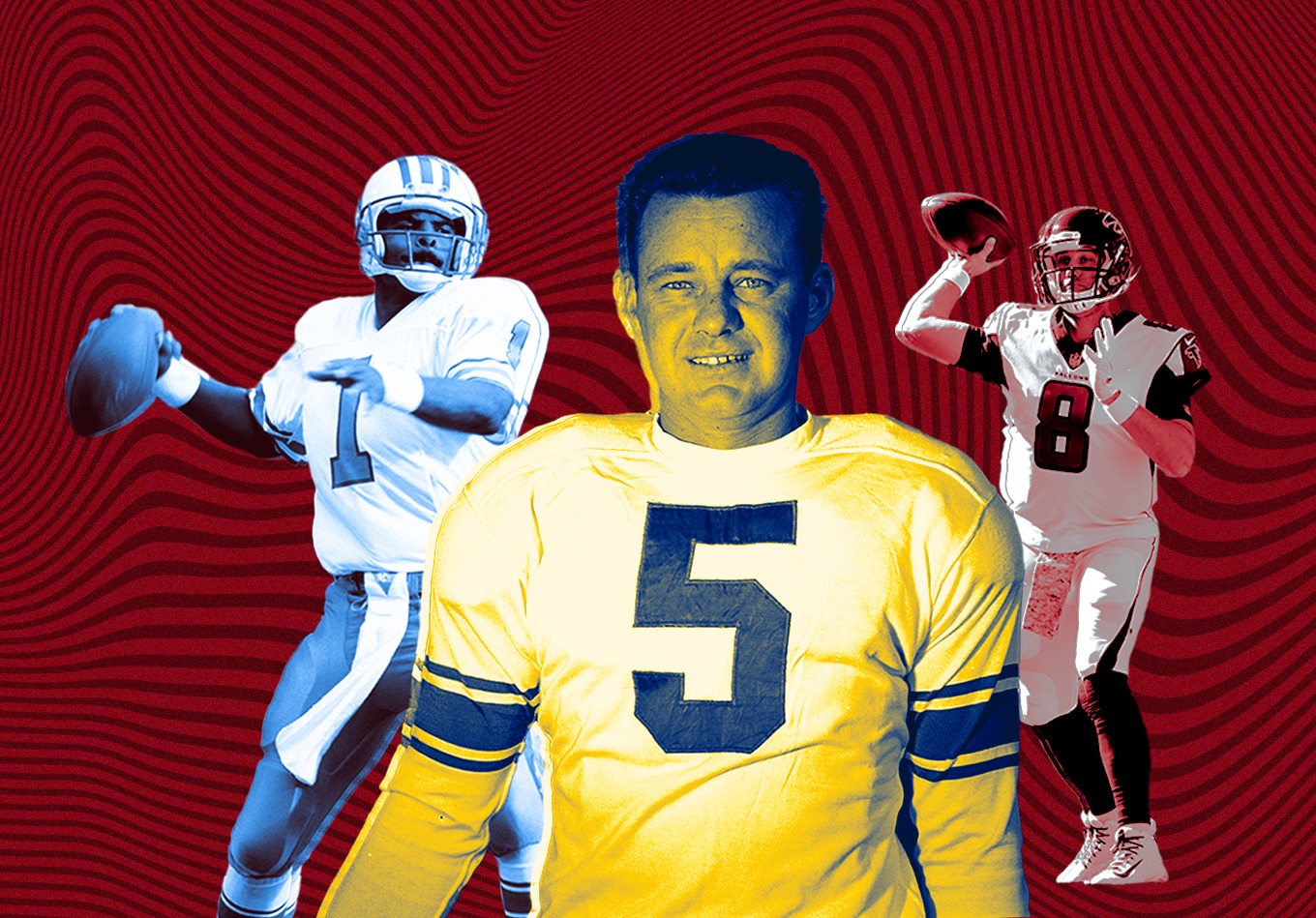 Airing It Out: The Games With the Most Passing Yards in NFL History

Twenty different quarterbacks have thrown for over 500 yards in an NFL game.

But who has done it on multiple occasions? And who managed to achieve the feat in the postseason?

We’ve delved into the history books to take a closer look at the members of the 500 Club:

For modern football fans, the idea of an NFL season opener on a Friday night might be somewhat of a surprise. But Norm Van Brocklin took his chance and produced a performance that saw him throw for 554 yards, an NFL single-game record.

The Los Angeles Rams quarterback needed just 41 passing attempts and 27 completions to set the mark in a 55-14 win over the New York Yanks, which still hasn’t been beaten over 70 years later. Van Brocklin would throw four touchdown passes during the game, four to Elroy Hirsch, and even managed to record a rushing touchdown of his own, even though he would end up for minus-three rushing yards for the game.

It could have been an even bigger performance for “The Dutchman”. Van Brocklin had one potential touchdown throw brought down at the one-yard line and even found the time to throw two interceptions, one of which was returned for a pick-six. Still, it was enough to beat the previous record single-game record set by Johnny Lujack two years earlier at 468 yards – a performance that only warrants a mere passing comment in this article because it isn’t a 500-yard game and only 500-yard games are cool. Normally Van Brocklin would have to split quarterback duties with Bob Waterfield, but the future Hall of Famer was injured on this occasion, giving his Rams teammate one of his only two starts for the season. All’s well that ends well though, as the Rams would go on to win the NFL championship while the Yanks would fold at the end of the season having undoubtedly failed to recover from such an aerial assault at the start of the campaign.

When looking at the Super Bowl era, the single-game record is somewhat surprisingly shared by two players and, amazingly, both played for teams based in Houston but not the same franchise.

Warren Moon, a future Hall of Fame inductee, was the first to set the mark in 1990 with the Houston Oilers coming up against one of the strongest defenses that season as the Kansas City Chiefs looked to lock up an AFC wild card berth in week 15.

Completing 27 of his 45 attempts for three touchdowns and no interceptions, Moon did have the chance to overtake Van Brocklin’s all-time record but instead the Oilers ran down the clock to secure a 27-10 victory in a season where the quarterback would lead the league in passing yards (4,689). This was one of Moon’s nine 300-yard games during the regular season. Perhaps the only disappointment here being that Moon wasn’t wearing the iconic sky-blue Oilers jersey, instead having to settle for the shiny pants that seemed all the rage at the turn of the 1990s.

By the time Matt Schaub was under center in Houston, the Oilers had shifted to Tennessee and become the Titans while the new Houston team, the Texans, was just ten years old.

This should have been a routine win for the 8-1 Texans against the 1-8 Jacksonville Jaguars in week 11 heading into Thanksgiving. But the game would end up being decided in overtime as Houston had to rally back to take a 43-37 victory – not that Schaub would mind in the end. Matching Van Brocklin’s feat of throwing five touchdowns to two interceptions, the Texans quarterback would need 55 attempts to complete 43 passes to match Moon, including a walk-off 48-yard touchdown throw to Andre Johnson.

Heading into this Week 16 game, Ravens defensive coordinator Don ‘Wink’ Martindale said it was too early to think about the Bengals quarterback as a potential Hall-of-Famer. Well, it appears some humble pie would be not so much eaten as force-fed when Burrow completed 37-of-46 passes with four touchdowns and no interceptions to set the mark as the fourth-best effort in the history of the NFL.

A slice of luck got him up to the higher number when a 32-yard touchdown catch was overturned on Cincinnati’s penultimate drive. Instead, it was a 52-yard completion to running back Joe Mixon that would add 20 yards to his haul for the day and surpass the following illustrious names.

Another tie but how the pairing of Boomer Esiason and Ben Roethlisberger came to throw for 522 yards each in a game could not be any more different. During his only season with the Arizona Cardinals at the tail end of his playing career, Esiason took to the sky an incredible 59 times but was only able to find his own receivers 35 times while throwing for three touchdowns and four interceptions in the process. It left him with a passing rating of 77.1, which was just enough for the Cardinals to squeak by against Washington 37-34 and surprisingly isn’t the lowest of members in the 500 club.

For Roethlisberger, it was a very different story. In his 150th career start, the Pittsburgh Steelers quarterback would go 40 for 49, connecting for 6 touchdowns as he recorded the 100th win of his career in a 51-34 victory over the Indianapolis Colts. Coming into the game, he had not gone over 400 yards or scored more than 3 touchdowns in a single 2014 season game. And while this might be the most passing yards he recorded in a single game, it wasn’t his first appearance in the 500 Club. That came back on December 20, 2009, when he outlasted the Green Bay Packers 37-36, with a 29 for 46 performance that featured three touchdowns.

In total, Roethlisberger has thrown for 500+ yard in four games, including the most recent in NFL history coming in the 2020 postseason when his Steelers team fell 48-37 defeat against the Cleveland Browns, with Big Ben throwing four touchdowns and four interceptions.

Only one other quarterback has achieved a 500-yard passing game in the playoffs and it shouldn’t be much of a surprise that it is Tom Brady – who in the process became the first player to do so. Once again, it came in a losing cause, but this time on the biggest stage of all as his 505 yards weren’t enough to overcome the Philadelphia Eagles in Super Bowl LII.

Prior to Warren Moon’s efforts in 1990, the previous best mark in the Super Bowl era was held by a quarterback who would end up on the losing side and record the worst passer rating of any member of the 500 Club.

Dan Marino’s 521-yard effort for the Miami Dolphins in week eight was all in vain, as he threw three interceptions in the last five minutes (part of a career-high five for the game) and completed just 35 of 60 passes for a 68.8 rating in a loss to the New York Jets.

There was at least one success story from the day for the Dolphins though. During the game introductions, Jim Jensen ran over to cheerleader and girlfriend Nerea Reid with an engagement ring live on a national television broadcast. Thankfully the pair had already agreed to marry a few weeks before, sparing any more embarrassment for the Dolphins on this day in 1988.

Of the 25 occasions where a quarterback has thrown for over 500 yards in a single season, they have come out on the losing side 12 times. And probably none more painful than Matthew Stafford’s attempts at Lambeau Field in 2012.

With the Packers already assured of their postseason bye week, Aaron Rodgers was inactive for the week 17 game leaving a duel between Stafford and Matt Flynn. Despite going 36 for 59 for five touchdowns, it wouldn’t be enough for Stafford to lead the Detroit Lions to victory with the 45 -41 Packers victory marking the highest scoring game between the two NFC North rivals. Flynn ended just 20 yards short of joining the 500 club himself, something his rather more illustrious teammate has only been able to match himself once against Washington in 2013.

Another tie as the dueling quarterbacks from Super Bowl LIII find themselves equal at 517 yards.

Tom Brady’s performance came in the opening game of the 2011 campaign, which didn’t get off to the best of starts after he threw an interception, his first in an NFL-record streak of 358 passes, on the New England Patriots’ first drive. But he would rebound to go 32 for 48 in a four-touchdown performance as part of a Patriots offense that put up 622 yards, still a franchise record, in a 38-24 win against the Dolphons.

Along with Brady and Roethlisberger, the only other quarterback to throw multiple 500-yard passing yard games is Drew Brees, setting his best mark in 2006 against the Cincinnati Bengals although his 510 yards and two touchdowns on that day still weren’t enough to lead the New Orleans Saints to victory, with three interceptions contributing to a 31-16 loss.

Jared Goff would set his own piece of NFL history despite coming out on the losing side of a tussle with Jameis Winston. His 45 completed passes (in 68 attempts) is tied for the most for a single game in the league’s history with Drew Bledsoe for New England against the Minnesota Vikings in 1994. The trouble is he only had two touchdowns compared to four turnovers that directly resulted in scores for the Tampa Bay Buccaneers, and would prove the difference where it matters most, as the Bucs pulled out the win 55-40.

Prior to Moon and Marino, the Super Bowl-era single-game passing yard record was held by Phil Simms, meaning there’s at least one thing he’s able to lord over Tony Romo at CBS HQ, whose career best was a mere 506 yards in 2013. That is apart from of course Simms’ two Super Bowl rings.

But it’s 1985 that interests us here, when Simms went 40 for 62 for the New York Giants in a 35-30 loss to the Cincinnati Bengals for what was then the second-most prolific performance by a quarterback in the NFL’s history. But all that effort resulted in just one touchdown vs. two interceptions would prove the difference against the Bengals, who emerged victorious despite their offense producing negative three yards in the second half.

There’s a chance that Carr might have even passed Van Brocklin’s record on that day if it wasn’t for the rash of Raiders penalties that set an NFL record at 23, with 71 yards being negated from his total.