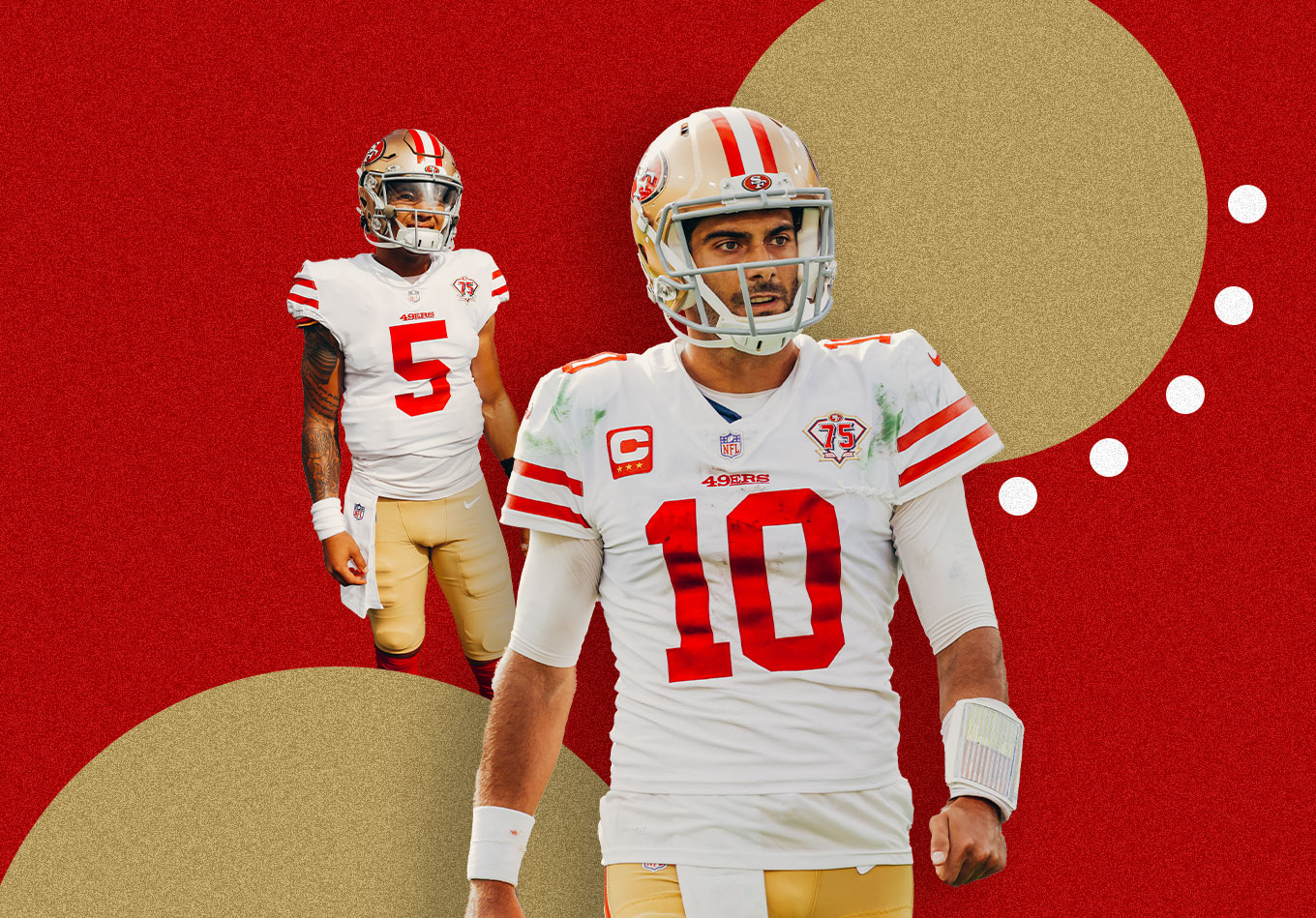 Should the 49ers’ Latest Seattle Shocker Put a Quarterback Change on the Table?

The San Francisco 49ers were hoping to write a new chapter in their rivalry with the Seattle Seahawks.

It ended up being the same old story.

Riding a three-game winning streak that had propelled them into the thick of the NFC playoff race, the Niners were expected to prevail against a 3-8 Seahawks team at their lowest ebb.

Instead, a mistake-strewn display allowed Seattle to launch what could prove the last stand of the Pete Carroll-Russell Wilson era, the Seahawks keeping the Niners out of the end zone at the end of a last-ditch 95-yard drive to preserve a 30-23 win, their 14th in 16 games against the 49ers since the beginning of the 2014 season.

San Francisco could not have done more to help Seattle as the Niners missed a chance to move to 7-5 and cement their grip on a playoff berth.

It was another frustrating day in an up-and-down campaign for a team that two seasons ago was the unquestioned elite of the NFC and, while the defeat was the product of a multitude of failures, the 49ers’ rollercoaster 2021 is emblematic of a quarterback akin to a thrill ride many are eager to escape from.

Talent Across the Board

Examine the 49ers’ roster and you will find top-level talent in almost every area.

George Kittle’s monstrous performance in Seattle was yet another illustration of the playmaking capability at their disposal.

Racking up 189 yards and two touchdowns on nine catches, Kittle produced a big play on five of his 12 targets against the Seahawks, thriving as the focal point of the Niners’ offense with Deebo Samuel out with a groin injury.

Samuel was the catalyst of that three-game winning run. The 2019 second-round pick compiled an NFL Offensive Player of the Year resume with his exploits as both a wide receiver and a running back.

With two rushing touchdowns in Week 12 against the Minnesota Vikings, Samuel became the first wide receiver in the Super Bowl era to score on the ground in three straight games. He leads the league with 14.93 scrimmage yards per touch and has 10 total touchdowns to his name.

The first Niners wideout to surpass 1,000 receiving yards since 2014, Samuel leads all players at his position with 9.5 yards after catch per reception. Kittle is sixth among tight ends with 222 yards after catch, a tally padded by his incredible 48-yard catch and run for his second touchdown on Sunday.

Between that duo and the resurgent Brandon Aiyuk, whose big-play rate of 39.7% is ninth among wideouts with at least 25 targets, the 49ers possess three significant passing-game threats whose versatility is a constant problem for defenses.

In addition to Samuel’s exploits as a runner, the Niners’ rushing attack also features arguably the top rookie running back in the league in Elijah Mitchell, whose 84.3 yards per game on the ground are the most among first-year tailbacks.

That ground game is aided significantly by the play of the man most consider the league’s elite left tackle in 2021. Trent Williams headed into Week 13 with a run-block win rate of 84.91% and a pass-block win rate of 89.32% that are both a long way above the respective league averages of 73.16 and 78.60 for the tackle position.

On the other side of the trenches, defensive end Nick Bosa is third in the league in sacks with 12 and tied for the NFL lead with 16 tackles for loss, serving as the undoubted star of a defense that held Seattle to 4.8 yards per play and forced three turnovers despite the absence of All-Pro linebacker Fred Warner.

Even without Samuel, the 49ers objectively had enough talent at their disposal to prevail and improve to 7-5, especially with a strong effort from the defense. Their failure to stretch the winning run to four games was not down to the injury to Samuel, but an infuriating lack of execution that has been a recurring problem in 2021.

While sections of the box score reflect the dominance the Niners enjoyed for long periods against Seattle, it is easy to identify the areas where it went wrong.

They committed three turnovers, were called for 10 penalties and went 3 for 10 on third down, losing the time of possession battle against a team that ranks last in that category.

It was a frustratingly familiar tale for the Niners, who lost to Seattle in Week 4 in strikingly similar fashion and have frequently been plagued by turnovers and penalties this season.

The Niners are 23rd in the NFL with a turnover differential of minus-4, while they have given up the fourth-most penalty yardage per game in the NFL (65.25).

Miscues on defense and on their special teams, which gave up a fake punt touchdown and lost a fumble as Travis Benjamin dropped the opening kickoff of the second half, contributed to the Niners continually gifting free plays and extra possessions to the Seahawks.

Yet, beyond the obvious poor discipline in other areas, the 49ers’ latest Seattle horror show was an encapsulation of the pitfalls of trusting your offense to a quarterback as volatile as Jimmy Garoppolo.

The Niners’ winning streak had quieted most of the questions surrounding when Kyle Shanahan would bench Garoppolo for rookie third overall pick Trey Lance.

And Garoppolo was, for the most part, accurate against the Seahawks. He delivered a well-thrown ball on 90.0% of his pass attempts, trailing only Derek Carr and Gardner Minshew for Week 13.

However, two of the Niners’ three turnovers came as a result of brutal interceptions from Garoppolo. San Francisco’s defense prevented the first, on which Garoppolo failed to spot the underneath coverage of Bobby Wagner and threw the ball right to the Seattle linebacker, from resulting in points.

They could not do the same following the second, however, Garoppolo inexplicably trying to force a ball to Kittle despite double coverage when he had Trent Sherfield open on a corner route, with that pick followed by the ultimately decisive touchdown pass from Russell Wilson to Tyler Lockett.

With a passer rating of 83.2 on passes of 21 air yards or more that is 23rd among quarterbacks with at least 10 attempts of that distance, the book on Garoppolo remains the same. At his best, he can execute Kyle Shanahan’s offense to a high level, but he consistently limits its potential by struggling to push the ball downfield, committing mind-boggling interceptions and failing to create outside the pocket.

Exacerbating the frustration around Garoppolo’s consistent inconsistency is that Lance, an athletic dual-threat quarterback and a more gifted downfield thrower, would theoretically remove those two limiting factors with which his more experienced team-mate continues to shackle the offense.

The 49ers are not short of their problems elsewhere on the roster. The right side of the offensive line is a major issue and the lack of depth at cornerback has been frequently exposed.

Yet those concerns are exacerbated when a team has a quarterback who cannot create for himself when the pocket breaks down and who regularly puts the defense under pressure with ill-advised throws that are all too often a part of his repertoire.

Though the penalties and mistakes from his teammates have been too common to simply label Sunday’s performance in Seattle as an aberration, the more common thread in losses for the 49ers this season has concerned Garoppolo and the limitations to his game that have long since been apparent.

With the stars they have on both sides of the ball, the 49ers should be much more than a 6-6 team scrapping for a wild-card spot and coming up short against the worst Seahawks team of the Carroll-Wilson era.

The likelihood is San Francisco will make the playoffs, but for them to have hope of and making any noise in the postseason, it would require a switch to a quarterback with the potential to be much more than Garoppolo.