The Yays and Nays: Our Week 13 Fantasy Football Projections, Top Plays and DFS Picks | The Analyst 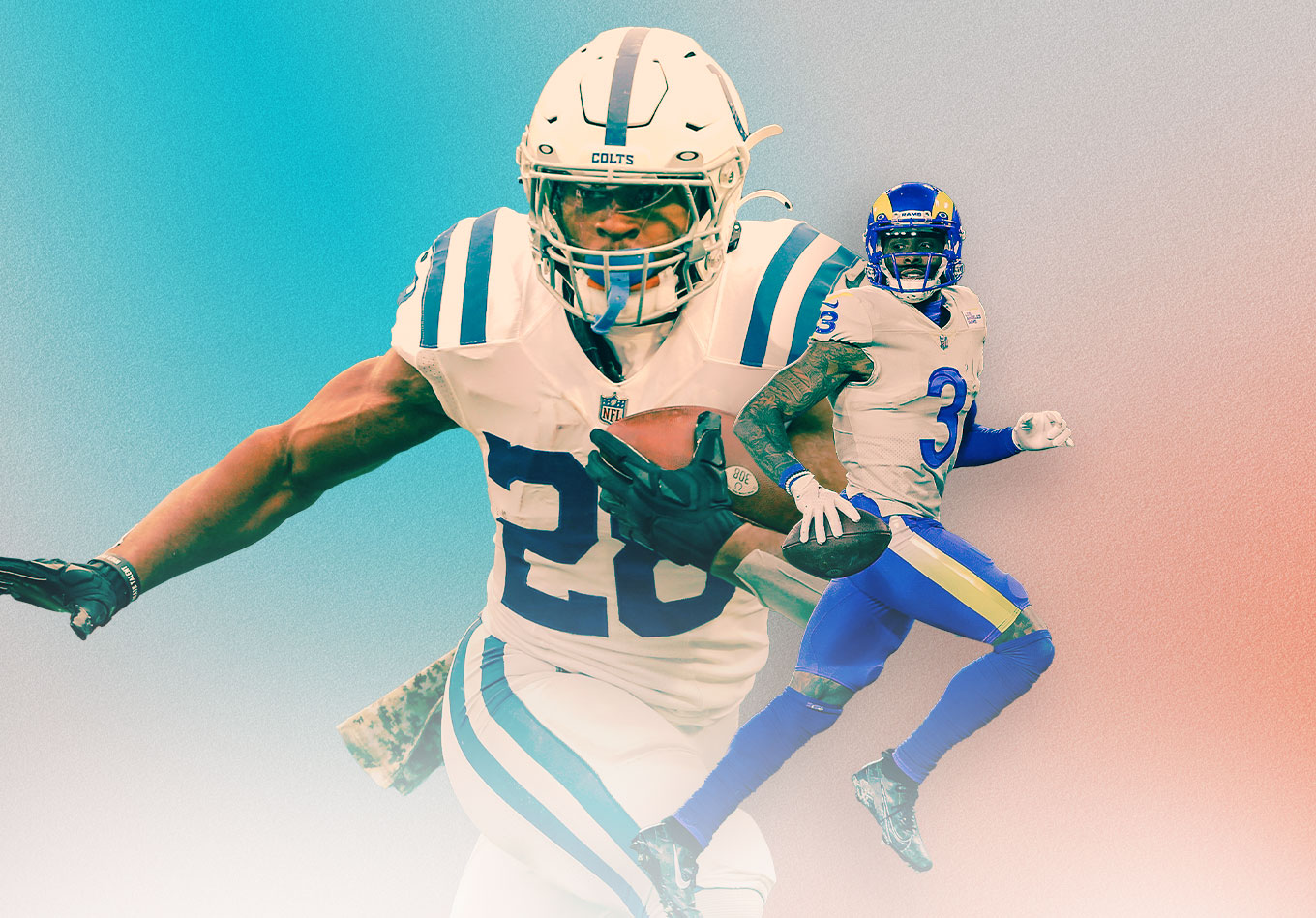 Back in the preseason, we highlighted two running backs that fantasy managers should be skeptical of drafting at their respective ADPs of RB9 and RB10 – Nick Chubb and Jonathan Taylor.

We had similar concerns for both players. Despite both being excellent running backs in 2020, they were facing uncertain timeshares and neither had a great track record of catching balls out of the backfield.

Taylor, through 12 weeks, is averaging a remarkable 23.68 PPR points per game. Chubb is at 16.6. That difference though, can be made up nearly entirely through touchdowns. In Chubb’s five games with at least one touchdown, he has averaged 23.1 PPR points.

Why then, is Taylor so significantly outperforming his ADP as RB1 through 12 weeks? And why is Chubb, who is on his bye this week, seemingly underperforming, as RB16.

There are two key factors – touchdowns and injuries. Taylor has scored at least once in every week since Week 4. Even more impressively, before slacking last week with only 97 scrimmage yards, Taylor had recorded at least 110 scrimmage yards to go with that touchdown in eight straight games.

Chubb, even in three fewer games, has more games without a touchdown (four) than Taylor (three). This is despite Taylor having played those three extra games.

Fantasy managers are obviously thrilled if they grabbed Taylor at the backend of the first round. So where did our projections go wrong?

Back in Week 9, when we first acknowledged our models were potentially wrong about Taylor, we said this:

His decline in touches has not hurt his overall production. He’s a rock-solid RB1.

Meanwhile, this is what we said about Chubb in the preseason:

Banking on a running back who is so reliant on production in the rushing game and specifically on rushing touchdowns (12 in 12 games last season) is tough.

Ultimately, that is why Taylor has ascended to fantasy superstar status and Chubb remains a borderline RB1. If we took away all of Taylor’s touchdowns over the last six weeks, he would still be averaging 17.8 PPR points per game.

With full control in the Indianapolis backfield, Taylor isn’t just a rock-solid RB1, he’s an elite RB1. This week, against the Houston Texans, he’s our highest projected running back, and our second highest projection non-quarterback.

As always, we’re breaking down our data-driven projections that use several of our AI-powered models. We’ll also get into some yays and nays before highlighting a few DFS value plays.

Carson Wentz, QB (IND) vs. HOU (ECR: 15, Our Rank: 11): Taylor’s quarterback in Indianapolis has had something of a renaissance. Would it surprise you to know that using NFL.com’s default scoring, Wentz is QB11 this season? Or that Wentz has the same number of games (three) with fewer than 17 points as Josh Allen (QB1 entering Week 13)?

In the teams’ first meeting of the season, Wentz scored 17.02 points. Last week, that would have tied for QB10. With four teams on bye, including Aaron Rodgers, Wentz is a strong replacement if he’s available on your waiver wire. He’s a strong QB2.

David Montgomery, RB (CHI) vs. ARI (ECR: 15, Our Rank: 7): We want volume with our top running backs and Montgomery fits that bill. In his three games since return from injury, D-Mont has seen 50 of the 59 backfield touches for the Bears.

The strength of the Arizona Cardinals defense is stopping the pass – they rank fourth in net passing yards allowed (204.0). Additionally, with Kyler Murray expected back, the Chicago Bears best chance of winning goes through Montgomery and the ground game. Luckily for Chicago, no team has allowed more rushes of at least 10 yards than Arizona.

It’s been a rough go for Montgomery this season, with only two games of more than 11 fantasy points. Our projections are confident he makes it a third this weekend. Montgomery is a low-end RB1.

Adam Thielen, WR (MIN) vs. DET (ECR: 12, Our Rank: 5): A common theme that usually is apparent is that relying on touchdowns is not a recipe for success. Players who can sustainably record fantasy points without touchdowns are favored – one of the main reasons our model is higher on players like Jakobi Meyers throughout the season.

Thielen, however, is the exception to that rule. Over his last 36 games, Thielen has scored 31 touchdowns. His sample size of scoring touchdowns has become so large that he’s shot up our projections in recent weeks. Compared with the other players in the top five, Thielen is projected to receive the lowest targets, and have the fewest receptions and yards. But his touchdown projection is higher than any other receiver by a significant margin.

Thielen, who is the only player our models have deemed as more than 50% likely to score a touchdown this week, is tied for the league-lead with 10 receiving touchdowns. He’s a good candidate to score again this week against the woeful Detroit Lions. He is a must-start player.

Odell Beckham Jr, WR (LAR) vs. JAC (ECR: 31, Our Rank: 17): Once upon a time, OBJ was a player fantasy managers built their lineups around. Now? He’s likely being considered mostly in flex positions and that’s what his ECR for this week indicates.

Lost in the aftermath of the Los Angeles Rams’ third straight loss was the fact that OBJ was on the field for every passing snap except one and was the recipient of 10 targets – his most in a game since Week 1 of 2020. And at the end of the week, he finished as WR9. With Cooper Kupp receiving most of the game plan attention from opposing defenses, Matthew Stafford and Beckham Jr. are poised to take advantage.

He’s currently questionable to play with a hip injury. But if he does suit up, he’s not just pushing for a flex spot. He’s a legit WR2 this week.

Tyrod Taylor, QB (HOU) vs. IND (ECR: 19, Our Rank: 26): Unfortunately for Texans fans, while our models are high on Wentz’s prospects for this week, they are rather low on Taylor. This, despite having a fantastic matchup against the porous Indianapolis Colts pass defense.

In a matchup of weaknesses, our projections are skeptical that Taylor and the Texans will be able to take advantage. Taylor only has two passing touchdowns in his three games since returning from injury and his 1.03 projected passing touchdowns is tied for the worst among all starting quarterbacks. Taylor is a risky play this week.

Najee Harris, RB (PIT) vs. BAL (ECR: 6, Our Rank: 12): In Montgomery’s section, we referenced volume being a good thing. Very few running backs get more volume than Harris and his 22.5 touches per game. But you need to be at least somewhat productive with your touches, and Harris’ 3.61 yards per carry is the second lowest among all running backs in the top 15 in carries.

In order to make up for his lack of production, Harris needs a ton of volume. Players don’t get tons of volume playing the Ravens. They lead the NFL in time of possession on offense (34:03) – more than a minute and a half more than the team in second. And during those times when they are on defense, the Ravens rank second in the NFL in rushing yards allowed per game (84.2) and last in passing yards allowed per game (275.7).

Since his 14-reception game in Week 3, Harris is only averaging four catches per game. With hardly any rushing production to speak of, that isn’t enough for our projections to suggest Harris as a strong RB1 this week. He’s a high-end RB2.

DeAndre Hopkins, WR (ARI) vs. CHI (ECR: 14, Our Rank: 31): Very few people dispute that Hopkins is one of the very best wide receivers in football. But he plays in the most egalitarian offense in football. Last week, Rondale Moore had 11 receptions on 11 targets. It was the first time any Cardinals player had reached 10 targets in a single game. Yes, including Hopkins.

Making matters worse, he’s coming off a hamstring injury and neither he nor Kyler Murray have played football in four weeks. Let’s give him a week to prove he belongs higher in the projections before we declare him back. He’s a risky play this week, and certainly not a solid WR2 like his ECR indicates.

Elijah Moore, WR (NYJ) vs. PHI (ECR: 25, Our Rank: 46): One of the many players above Hopkins in targets per game is Moore, who has been the recipient of 33 targets in his last four games.

Unfortunately for Moore, he faces a brutal matchup against a Philadelphia Eagles squad that has been one of the best against wide receivers all season. Only four receivers have produced a top-25 finish against the Eagles this season, none since Week 9.

Moore has recorded less than 50 receiving yards in two of his last three games, despite the uptick in targets. Our projections think he’s going to make that three of his last four games. Moore is a risky play this week.

Eli Mitchell, RB (SF) vs. SEA (DK Price: 6,000): The main competition for touches in the San Francisco backfield for Mitchell the past few weeks has been Deebo Samuel. With Samuel out this week, Mitchell is a strong bet to finish with the most carries in the NFL this week. Against a weak Seattle rush defense, he’s our projected RB4 and a strong player to build your lineup around.

Chris Godwin, WR (TB) vs. ATL (DK Price: 6,600): Godwin has consistently been one of our best values all season. A premier option in football’s highest scoring offense, Godwin recorded 16.2 PPR points against the Atlanta Falcons back in Week 2. Our models expect him to have a similarly productive outing this time around. He is not one of the 10 most highly priced wide receivers for the week, but he’s comfortably within our top 10 among wide receivers.

Evan Engram, TE (NYG) vs. MIA (DK Price: 3,500): If you’re building your lineup around cheap tight ends, Engram might be the tight end to target. He’s recorded at least four targets in all but one game this season, and is averaging 5.2 targets over his last five games. With three double-digit PPR performances in his last five outings, a fourth would make him worth the low price.