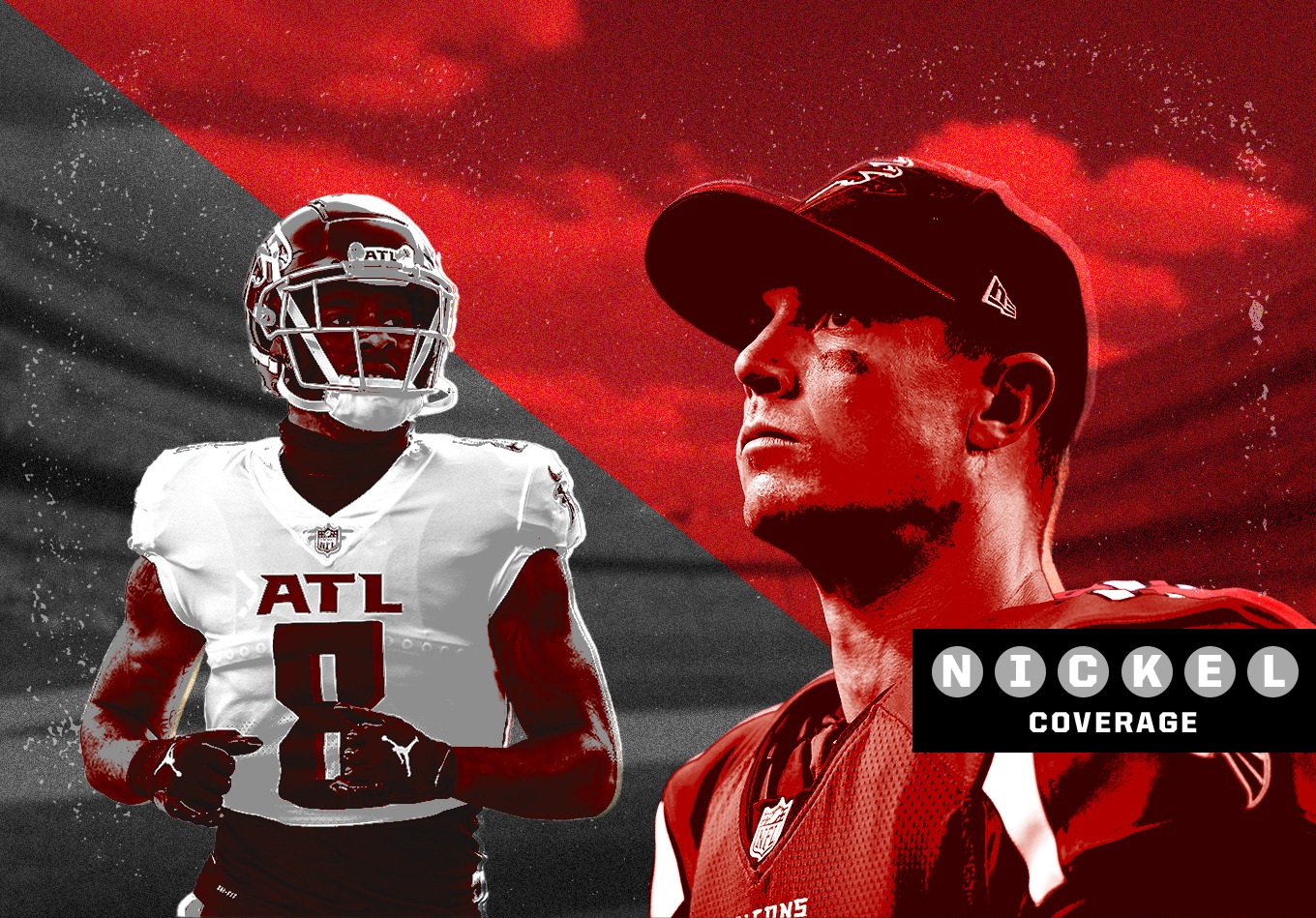 Nickel Coverage: The Falcons Are Stuck in Limbo

There were celebrations in the Atlanta Falcons war room back in April when the team picking before them, the San Francisco 49ers, made Trey Lance their quarterback of the future.

Atlanta’s delight was not related to any unfavorable opinions on Lance. The Falcons jubilation was because the Niners decision allowed them to enact their plan to select tight end Kyle Pitts the fourth overall selection, turning him into the highest-drafted player at his position in NFL history.

Yet the Falcons Week 15 performance only served to raise further questions concerning whether those celebrations were misguided as they were crushed 31-13 on the road by the surging seemingly playoff-bound 49ers.

There has been plenty of discourse about the merits of San Francisco selecting Lance and then having him sit for a year behind an often-volatile veteran in Jimmy Garoppolo.

Whether that approach pays dividends in the long term remains to be seen, yet San Francisco’s dominant success in a crucial matchup in the playoff race should intensify the scrutiny on a Falcons team whose vision for the future appears conspicuous by its absence.

It was easy to see why the Falcons were so enamored with Pitts. A monstrous athlete blessed with wide receiver speed and a near-6’6 and 245-pound frame, Pitts was viewed as perhaps the finest tight end prospect to enter any draft because of his ability to separate from coverage, dominate at the catch point and make things happen with the ball in his hands.

With 847 receiving yards to his name, Pitts is on course for a 1,000-yard season but has just one touchdown, the superiority he was expected to show in the red zone failing to materialize so far.

The separation has also not been as consistent as perhaps anticipated. Pitts has registered a burn, which is when a receiver wins his matchup with a defender on a play where he is targeted, 62.8% of the time. That is above the average of 60.2% but only 31st among tight ends with at least 10 targets in 2021.

Pitts is above average in terms of burn yards per target (11.3) and burn yards per route (2.8), while he is producing a big play on 34.4% of his targets, putting him seventh among tight ends with at least 25 targets.

Tight end is a position where rookies typically tend to struggle, so in that context, Pitts’ numbers are impressive. Still, his impact to this point can hardly be considered worthy of his draft slot.

Pitts is not to blame for failing to live up to expectations that were always likely to be too high. The former Florida Gator was put in a difficult position by a franchise unsure of its direction.

The acquisition of Pitts suggested the Falcons believed they were in a position to contend in the NFC with 2016 MVP Matt Ryan at quarterback and a talented offensive mind in Arthur Smith hired as their head coach.

But his selection was followed by a move that flew in the face of any such belief as the Falcons traded future Hall of Fame receiver Julio Jones to the Tennessee Titans.

That deal was in part motivated by the Falcons being pressed up against the salary cap, as well as a desire from Jones for a change of scenery and his increasingly troubling injury history.

Though the trade was justifiable, it extinguished any notion of Atlanta wanting to build around Ryan and contend, and the Falcons’ inconsistent and underwhelming 2021 campaign has delivered a reminder that the idea of them competing at the sharp end of the NFC was always ambitious.

Atlanta entered Week 15 still firmly in the mix for the playoffs at 6-7 but with a point differential of -108. After their blowout loss to the Niners, that has dropped to -126, the fourth-worst in the NFL.

This is a bottom-half team that has been masquerading as a playoff contender. Such a season would have been more acceptable had they used their premium pick on a quarterback in a class seen as an excellent one at the position. Having opted not to do so, the Falcons are mired in NFL no man’s land.

No Moving on From Matt… For Now

The Falcons could theoretically get out of Ryan’s contract this offseason but a dead cap charge of over $40 million means they would only save a little over $8 million against the salary cap.

A parting of the ways is more plausible in 2023 when the Falcons would save $28 million by moving on from a quarterback who would then be entering his age-38 season.

Ryan is not the problem for the Falcons, but he is also not the answer.

He is delivering an accurate, well-thrown ball on 81.2% of his attempts, the eighth-best rate among quarterbacks with at least 100 passes, and is doing so despite losing Jones and Calvin Ridley, who has taken a break from the game to focus on his mental health, from his supporting cast.

At the same time, Ryan is averaging 7.16 air yards per attempt, the sixth-fewest in the NFL (min. 100 attempts). Ryan may be limited by those around him, but he is also not performing at a level to elevate that group.

That mix has the Falcons in quarterback purgatory, and their path to exiting that unenviable position is not clear. The 2022 quarterback class is, at least on the surface, well short of the standard of the 2021 vintage, and Ryan – while no longer a member of the league’s elite – still has the requisite talent to win enough games to ensure the Falcons will not be in a position to draft a top signal-caller in 2023.

In Pitts, the Falcons have a weapon widely viewed as a possible generational talent, but the decision to select him means they are now stuck with a quarterback not good enough to help them contend but too good for Atlanta to be able to tank to land his successor. Hindsight is always 20-20, but the Falcons’ short-sighted choice not to draft Ryan’s heir apparent makes a route to the top hard to foresee.