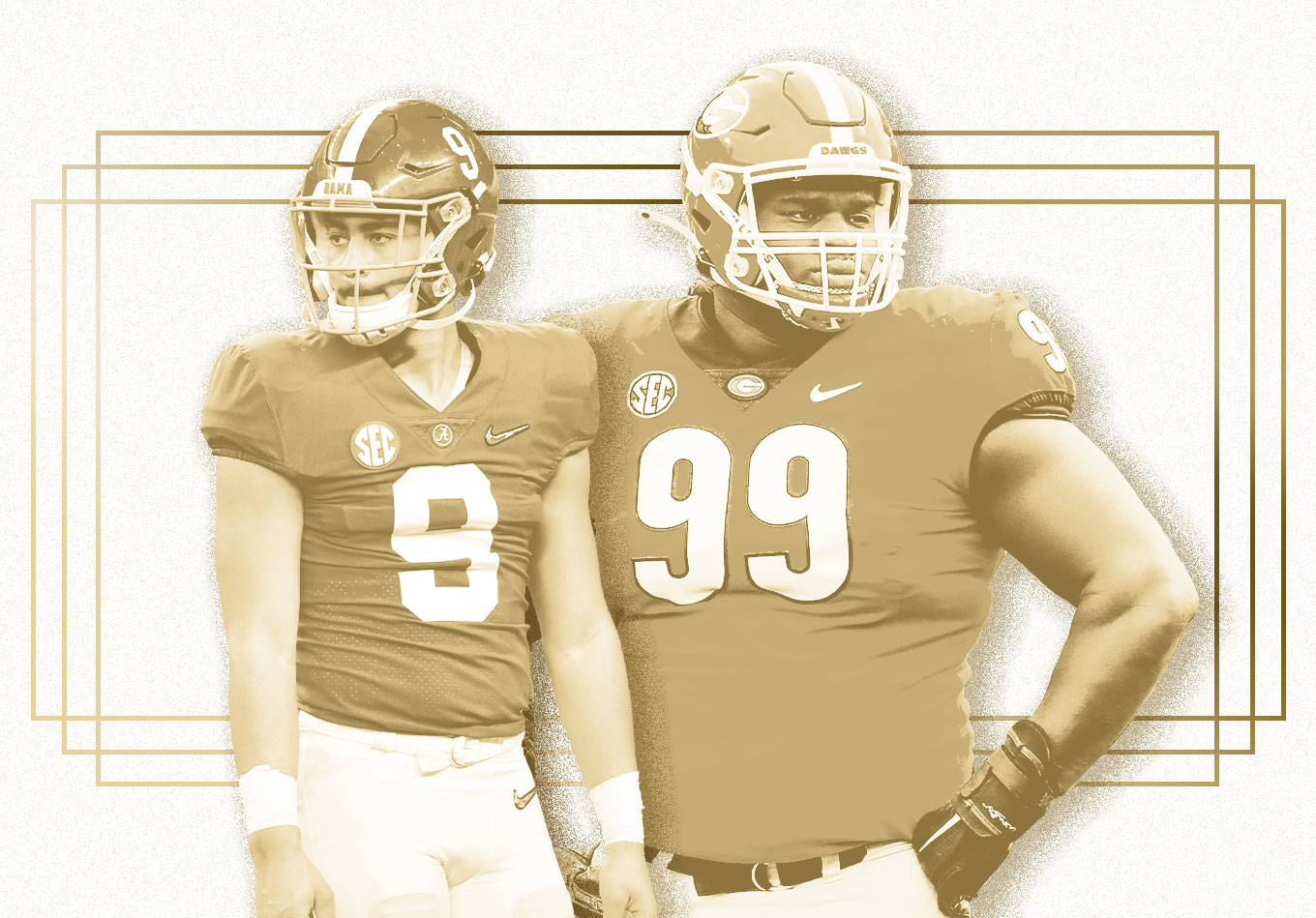 There are six prestigious bowl games that make up what is colloquially referred to every year as the New Year’s Six games.

The two college football semifinal playoff games rotate between those six bowl games every season. The four games that aren’t involved in the playoffs host the conference champions and at-large teams that just missed on a playoff spot.

This year, the playoff games are the Cotton Bowl Classic and the Orange Bowl, meaning the other four bowl games comprise the rest of the New Year’s Six: the Peach Bowl, Fiesta Bowl, Rose Bowl, and Sugar Bowl.

With bowl games in full swing, we re-ran our projections on the New Year’s Six games to get the most up-to-date information on each team. Here’s how things may shake out and some things to watch.

Line: Spartans by 2.5
The Analyst Win Probability: Panthers 57.9%
Key Stat: The Spartans allowed 337.7 passing yards allowed per game. Not only was that by far the worst mark in college football this season, but it was also the worst mark by any FBS team over the last five seasons.

Pitt quarterback Kenny Pickett and Michigan State running back Kenneth Walker both opted out of this game to prepare for the NFL Draft. But don’t let those stars skipping this bowl game distract you from another one who’s going to be playing.

Panthers superstar Jordan Addison won the 2021 Biletnikoff Award as college football’s most outstanding wide receiver. Addison will be Patti’s security blanket as Patti attempts to replace Pickett, the potential first round draft pick, in an offense that finished the season fifth in the nation (350.2) in passing yards per game.

Michigan State’s defensive strength is limiting the ground attack. Our model believes that Patti can find success throwing to Addison and a talented crop of Panthers offensive weapons. Despite being an underdog in Vegas, our model views the Panthers as slight favorites.

Line: Notre Dame by 2
The Analyst Win Probability: Irish 55.5%
Key Stat: The Cowboys led all of college football with 55 sacks, thanks to a remarkable closing stretch. Since their only game without a sack on Oct. 30, the Oklahoma State defense racked up 33 sacks over its last five games – notching at least six sacks in all five games.
Key Matchup: ND QB Jack Coan vs. Cowboys’ third down defense

Though there are plenty of exciting bowl games remaining, this one might be the most exciting for defense aficionados. Both teams finished in the top 10 in FBS scoring defense. Notre Dame, specifically, dominated the back quarter of its schedule. The Irish only allowed two touchdowns in their final four games and won by an average margin of 34.75 points.

Oklahoma State’s defense was strong all season, bolstered by a defense that was excellent in getting off the field on third downs. The Cowboys finished second in college football in opponent’s third down conversion percentage.

This game is the one in which our model is least confident in the winner. For Notre Dame, Coan’s ability to produce against a defense that will send multiple exotic blitzes on third down will be crucial to help the Irish overcome the Cowboys. If the Irish can stay on the field, they’ll find chances to score in a game in which every point will be crucial.

The “Granddaddy of Them All” pits the Buckeyes, playing in their 16th Rose Bowl, against the Utes, playing in their first ever Rose Bowl. Along with the 2009 Sugar Bowl against Alabama when Utah was still in the Mountain West Conference, this may be the biggest game in program history.

In that game in 2009, Utah jumped out to a 21-0 first quarter lead and cruised to a 31-17 victory. A quick start would be ideal for Utah again, because the team’s biggest advantage comes in the form of a physical, smash-mouth identity that it’s going to attempt to impose on Ohio State. In the Buckeyes’ two losses this season (Oregon and Michigan), the team allowed 676 rushing yards (338 per game) and nine (!) rushing touchdowns.

Well, this season, Utah is averaging 216.0 rushing yards per game – not much less than Michigan’s 223.8. With the Buckeyes’ second team All-American defensive tackle Haskell Garrett skipping the game to prepare for the NFL Draft, Utah rightfully thinks it has an advantage in the trenches. More than anything else, including the lethal Buckeyes offense (which will be missing wide receivers Chris Olave and Garrett Wilson), the Utah offensive line controls the outcome of this game.

Something interesting has happened during the first half of the bowl game schedule. The supposedly dominant SEC has gone 0-4. After re-running our projections, Ole Miss went from a 57.6% favorite to a rather significant underdog. Why? Because with the more data we’ve received from bowl season, the standing of the Rebels has dropped, while the Bears’ outlook has increased.

Unlike Pickett and some of the other highly projected potential draftees, Corral is going to play for Ole Miss. As the undisputed leader of that offense, Corral finished fourth among all Power 5 quarterbacks with 11 rushing touchdowns. He had at least ten rushing attempts in nine games this season, including a game against Tennessee in which he carried the ball 30 times for 195 yards.

Finding that type of success might be difficult against a Baylor defense that only allowed 129 total rushing yards to quarterbacks over their final eight games. Whether Corral can find success against the Bears defense on the ground in what could be a lower-scoring game may determine the outcome.

There is no denying that Cincinnati enters its semifinal playoff matchup against Alabama at a major talent disadvantage. The Bearcats do have lots of talent though, and nowhere is that more apparent than the secondary in what is undeniably the strongest position group on their roster.

Led by cornerback Ahmad Gardner and safety Bryan Cook, the Bearcats defense finished fourth in the FBS in completion percentage allowed to opposing quarterbacks. How about another number? Cincinnati finished first in all of college football in passer rating allowed.

It’s a good thing that’s a strength of the Bearcats, because here comes the Heisman Trophy winner, Bryce Young, and his host of incredible stats including an FBS leading 10.75 touchdown/interception ratio (43/4). If the Bearcats are to pull off the upset of the season, their strength will need to be better than Alabama’s strength.

Line: Georgia by 7.5
The Analyst Win Probability: Bulldogs 76.8%
Key Stat: Georgia only allowed 9.5 points per game. Its one loss on the season came in the only game it allowed more than 17 points.
Key Matchup: Michigan’s rushing offense vs. Georgia’s rush defense

College football’s two most dominant defensive linemen headline this playoff battle between two heavyweights. For Michigan, it’s Aidan Hutchinson, who recorded 14 sacks as part of a two-way terror with David Ojabo (11.0 sacks) rushing on the opposite side. For Georgia, it’s the behemoth of a man in the middle, defensive tackle Jordan Davis.

Davis leads a Georgia defense that was dominant all season. The Bulldogs finished third in the FBS in average yards allowed per rush (2.6) and only allowed three rushing touchdowns all season, three fewer than the next closest team. And two fewer than the five touchdowns that Wolverines running back Hassan Haskins scored in a physical demolition of Ohio State.

Michigan ended the regular season 10th in the FBS in rushing yards per game (223.8), 12th in rushing yards per carry (5.3) and third in rushing touchdowns (39). The opportunity to move on in this game will almost certainly be guaranteed by the success Michigan can generate on the ground. Our model still views Georgia as the best team in the country and is skeptical of Michigan’s ability to have success on the ground.